Discover the Enchanting Villages of Auvergne 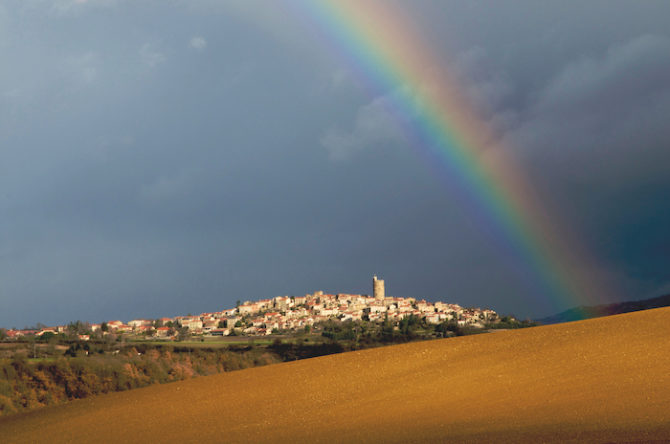 Wind your way south through the Auvergne where picturesque communities cluster conveniently close to the main road. Gillian Thornton took time out to explore

With its dramatic volcanic scenery, vast skies, and tumbling rivers, the Auvergne attracts walkers, kayakers and lovers of adrenaline sports from all over Europe. But there’s another side to this rural and undulating region: small towns and enchanting villages nestle in hidden valleys and on verdant slopes, sometimes out of sight, but often within easy reach of the main throughways.

Heading south-east from the western Channel ports to the Rhône Valley on a summer’s day, my Auvergne adventure is prompted by a familiar sign that always tempts me to make a detour: just off the A71 north of Gannat, I spot the logo for Plus Beaux Villages de France alongside a signpost to Charroux.

Plus Beaux Villages all differ in character and facilities, but can always be relied upon to deliver an authentic capsule of local life, history and architecture. Membership of this elite band isn’t for life – members are re-evaluated roughly every six years – but there are currently 158 accredited communities across France. 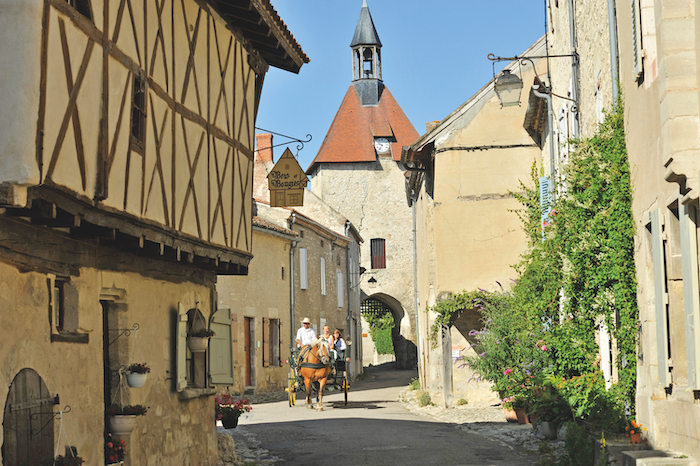 There’s lots to do in beautiful Charroux

To stand any chance of selection, a village must have a population of less than 2,000; at least two protected sites or monuments; and support for the application through a vote by the Municipal Council. A detailed application is then assessed against 27 criteria. It’s not a process for the faint-hearted, with only around one in five applicants making the grade.

In Charroux – the only Plus Beau Village to be found in the Allier département – I park beside stone cottages covered in climbing roses before refuelling with coffee and pâtisserie at a tiny tearoom on one of the picturesque lanes. Located at the crossroads of Roman roads and fortified under the Bourbon dukes, Charroux flourished in the Renaissance thanks to an advantageous trading charter, its vibrant tannery industry and an abundance of vineyards. 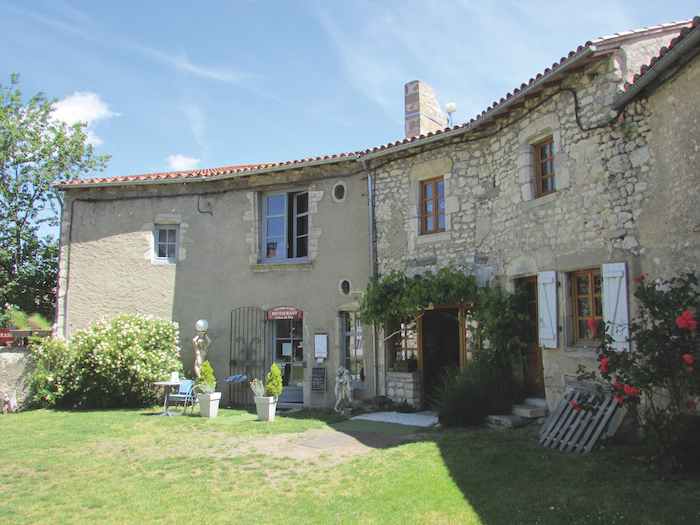 Despite a fire during the Wars of Religion, many fine buildings remain today, including the 12th-century church of St John the Baptist. I pick up a free leaflet showing the points of interest, amongst them a medieval city gate, a 17th-century bell tower and 19th-century covered market. Most interesting of all is the Cour des Dames, a circular meeting place in the heart of the village where women would gather to chat and men would gather to chat them up!

I am also struck by the wealth of craft workshops and specialist boutiques, because if I could level any criticism at the excellent Plus Beaux Villages concept, it is only that some villages – especially in rural areas – have few amenities to offer to visitors outside peak season. Not so Charroux. Temptation abounds from artisan sweets and chocolates, to antiques, saffron, and interior design items. Stop off at Les Bougies de Charroux, a half-timbered shop selling handmade fragranced candles, for a real scent of the Auvergne.

Fired up by the charm of Charroux, I study the map of my planned meander southwards and discover there are several more enchanting villages along my route, as well as two delightful small towns, both listed amongst Michelin’s 100 Plus Beaux Détours de France. So with time on my side, I decide to take some time out and investigate what they have to offer. 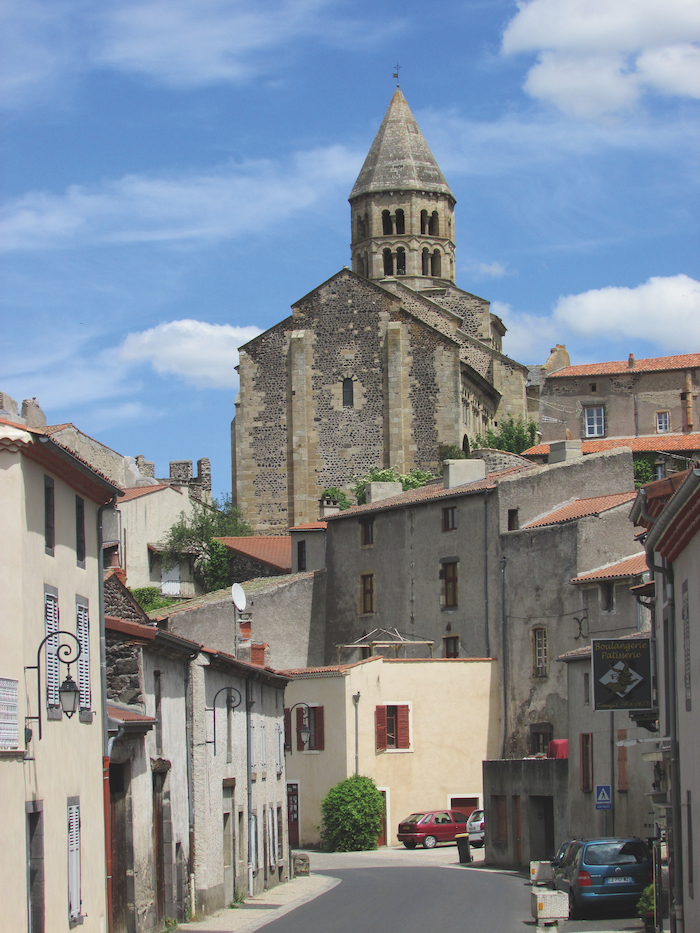 Stop off in Saint-Saturnin in Puy-de-Dôme, which is home to one of eight outstanding churches on Auvergne’s Romanesque Route. Photo credit © Gillian Thornton

South of Charroux, the A71 takes a straight course to Clermont-Ferrand, regional capital of the Auvergne, which is well-worth a stopover if time permits. South of Clermont, the A71 morphs into the A75 and a short detour west brings me to Saint-Saturnin in Puy-de-Dôme, home to one of eight outstanding churches on Auvergne’s Romanesque Route.

Perched on a high lava flow above the gorges of the river Monne, the village is dominated by the octagonal tower of a white sandstone basilica dedicated to the first Bishop of Toulouse, martyred in the third century AD. Once my eyes become accustomed to the dim light, I notice shades of red, grey and cream in the huge building blocks that make up the pillars, as well as 15th-century wall paintings.

Just across a small square behind iron gates, a long drive leads to an imposing castle, founded in the 13th century and embellished during the Renaissance. Queen Catherine de’ Medici stayed here in 1566 to be followed 20 years later by her daughter, Marguerite de Valois, of whom more later. You can take a tour of the interior during the summer months or even book to stay in one of the guest rooms. 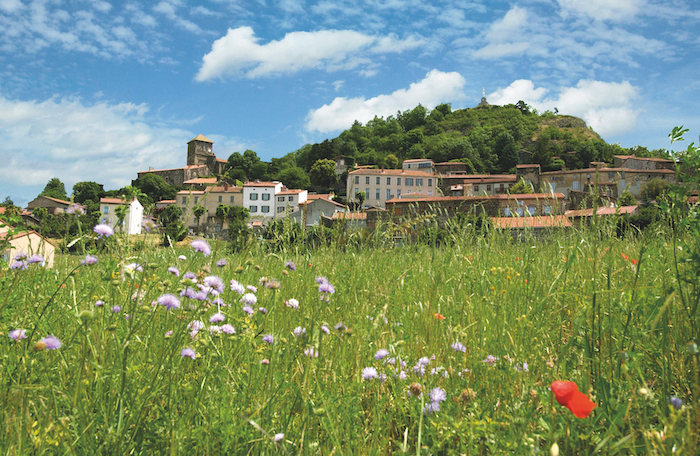 Saint-Saturnin is a delightful place for a stroll. Just follow the brown information panels for a 30-minute walking tour, which winds through narrow alleys and small squares, past terraces, fountains and wash houses. Yellow, red and blue logos indicate whether the panels represent heritage sites, religion or water, and street names reveal the trades that once went on here, including butchery and a farrier.

Just 19km from Saint-Saturnin, I turn off the A75 to the east to visit the Plus Beau Village of Montpeyroux. I’d happily buy a property here just for the view across the valley to the volcanic peaks. On a clear June morning, the Puy de Sancy, the highest peak in the Massif Central, is clearly visible, still streaked with snow. And I can spy the Puy-de-Dôme too, at the heart of the Chaîne des Puys, which is classified amongst the select band of Grands Sites de France. 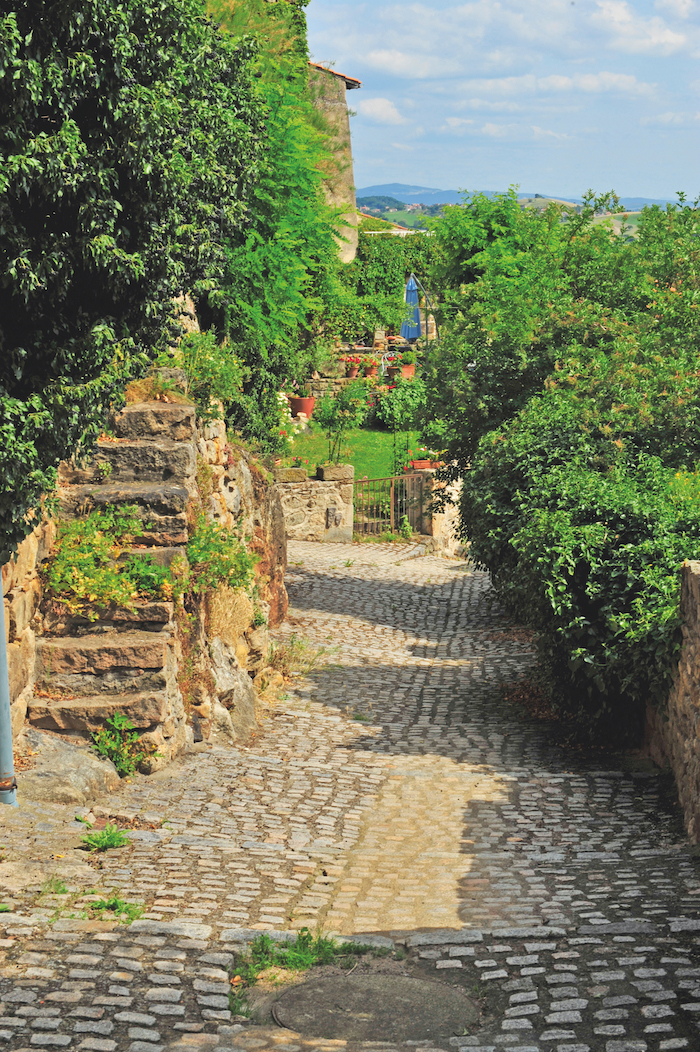 It’s easy to see why Montpeyroux is one of France’s Plus Beaux Villages. Photo credit © Auvergne-Rhône-Alpe Tourisme

Montpeyroux – from ‘mont pierreux’ or ‘rocky hill’ – is clearly one of the most popular of Plus Beaux Villages, visitors being required to leave vehicles at a car park beside a children’s farm and play area outside the village. Pass through the Tourist Office to pick up the free booklet detailing the history and highlights, as well as the resident artisans, many of whom open to visitors throughout the year.

There was a priory here as far back as 1095, followed by a château in the 13th century, of which only the tower remains. But the village that grew up around the castle is a delight with its golden stone houses, fortified medieval gateway and quiet courtyards, plus, of course, those fabulous views. There’s a wedding going on as I pass the Church of Notre-Dame and it’s hard to imagine a prettier place to take your vows. 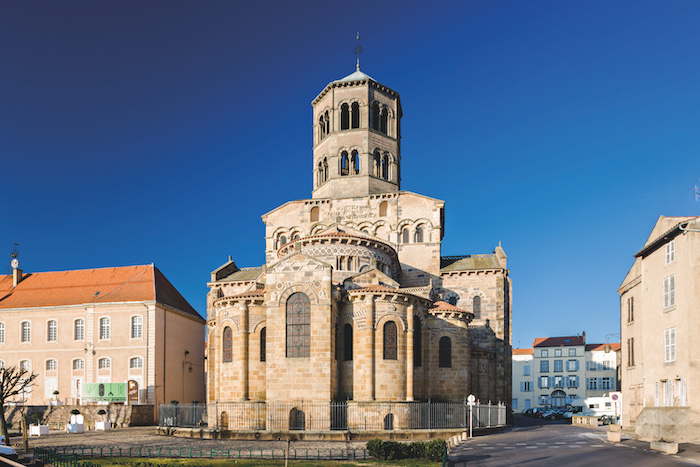 The Abbatiale Saint-Austremoine at Issoire dates back to the 11th century. Photo credit © Auvergne-Rhône-Alpe Tourisme

Another 15km on and my route takes me through Issoire, too big to be a Plus Beau Village but selected by Michelin as one of its 100 Plus Beaux Détours in France. The former Benedictine abbey church of Saint-Austremoine is a real eye-opener, with its lavishly decorated exterior, inlaid with stones and adorned with interlaced designs. But wait till you get inside.

With the exception of the crypt, the interior walls and pillars received a neo-medieval makeover in the 19th century, when they were painted in bright colours and bold patterns. And whilst liberties were almost certainly taken with the designs and shades, they do conjure up the atmosphere and colour of medieval churches to great effect. 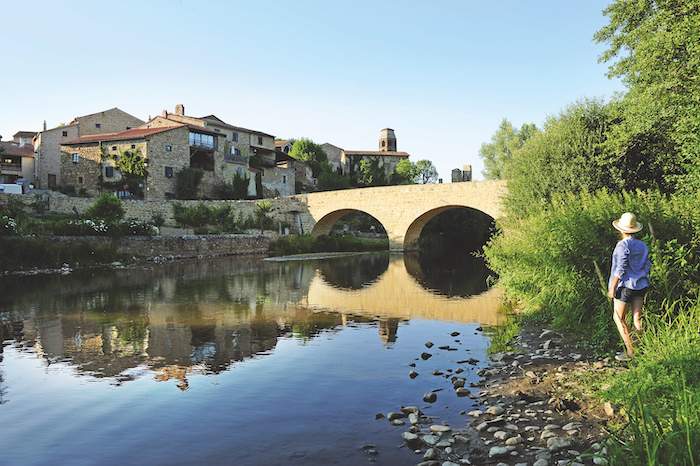 Ten kilometres east of Issoire, I stop to explore Usson, another Plus Beau Village, which boasts the remains of triple fortifications, substantial winemakers’ houses, and a once-important castle, destroyed by royal command in the 17th century. Between 1586 and 1605, the village was the enforced home of Marguerite de Valois, daughter of Catherine de’ Medici and feisty young wife of Henri III of Navarre who was crowned Henri IV of France in 1589.

Marguerite was Roman Catholic while Henri was Protestant, but far from drawing the two religions together, their marriage in 1572 saw the newly-weds quickly embroiled in the French Wars of Religion. The couple separated four years later. Then in 1586, plots and counter-plots resulted in Marguerite’s brother, Henri III of France, imprisoning her in the castle at Usson, where she stayed for 18 years. 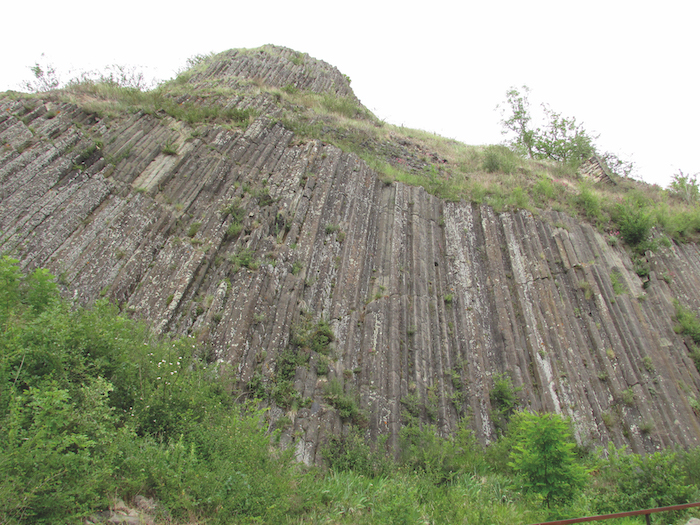 Here ‘La Reine Margot’ established her own court, inviting artists, writers and musicians, and – according to popular belief – no shortage of eligible lovers, as well as carrying out many charitable works. Make up your own mind by following the information panels on the Salamander Trail (1.5km), a symbol adopted by her grandfather François I, first of the Valois dynasty. The Circuit des Remparts (2.4km) skirts the hill above the village and passes an impressive set of typical Auvergnat ‘organ’ columns formed by solidified basalt.

South of Usson, I leave the A75 to veer east towards Le Puy-en-Velay, starting point for one of the four main French routes to Santiago de Compostela in Spain. 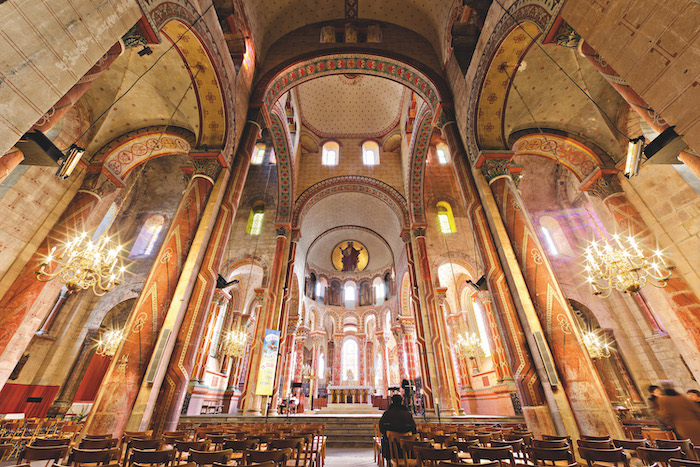 But first, Brioude – another of Michelin’s 100 Plus Beaux Détours, on the banks of the Allier. Here you can visit the family-friendly Maison du Saumon et de la Rivière to meet 40 species of fish, wander the historic streets, and drop in at the lace workshops and boutique of the Hôtel de la Dentelle.

But above all, don’t miss the Basilica of Saint-Julien, dedicated to a Roman soldier martyred for converting to Christianity. The largest Romanesque church in the Auvergne, it’s extraordinary – not just for the Biblical frescoes in vibrant colours, but also for the russet and ochre shades of its stone pillars and the geometric patterns of the floor, created from pebbles smoothed by the waters of the Allier. The basilica also boasts 37 contemporary stained-glass windows designed by Korean monk and artist Kim En Joong and produced by the Atelier Loire in Chartres. 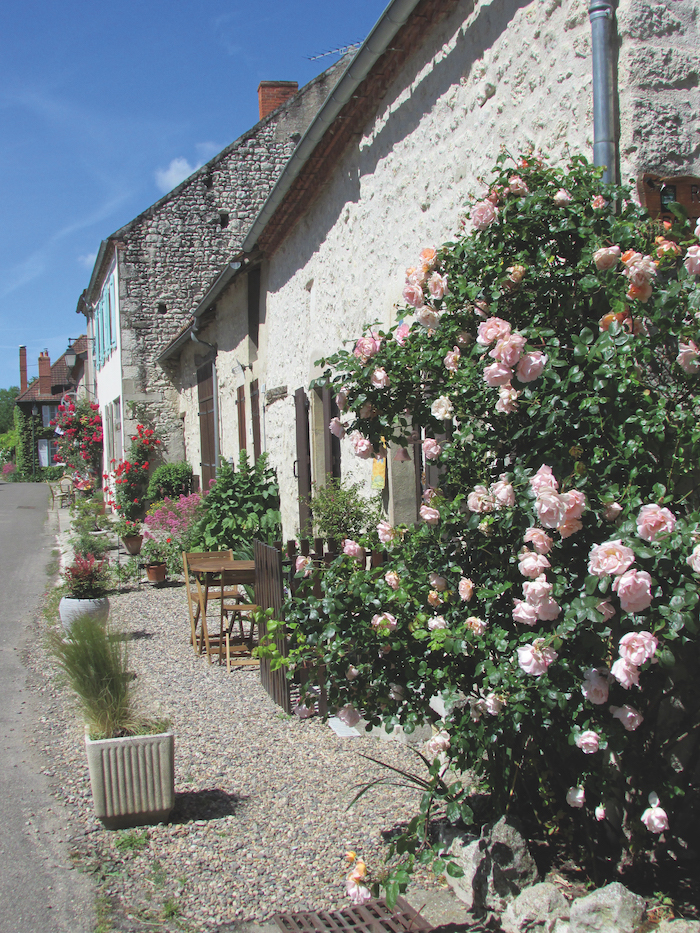 Last stop on my amble through Auvergne is a welcome return to Lavaudieu, another of the most popular Plus Beaux Villages, this time with a convenient car park beside the Senouire river. Stone cottages with bijou kitchen gardens cling to the terraces below the 11th-century hilltop abbey, founded here in this tranquil valley to offer a suitably genteel existence to a community of Benedictine nuns.

A cobbled lane winds up to a broad main street, the bijou church of Saint-André with yet more wall paintings, plus the Auvergne’s only Romanesque cloister. All of them are well worth a look.

Also, be sure to drop down to the river bank for a different perspective on those tumbling terraces. But before you do, make time simply to drink up the atmosphere over a glass of something cold at a café table… and pause to reflect that the thing all of Auvergne’s many man-made gems have in common is that each and every one is unique. 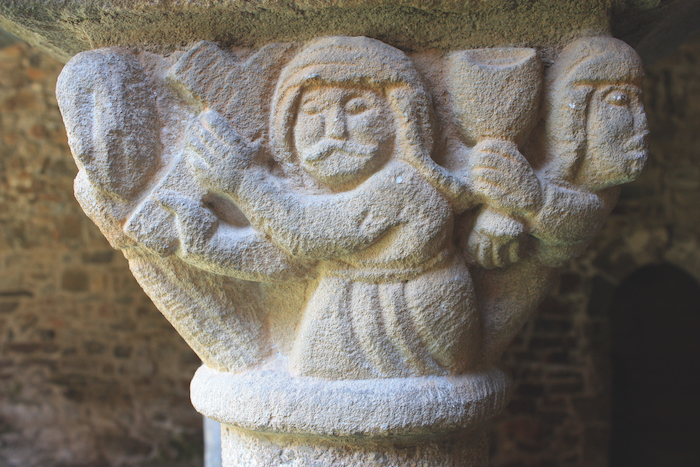 The Romanesque Cloister at Lavaudie