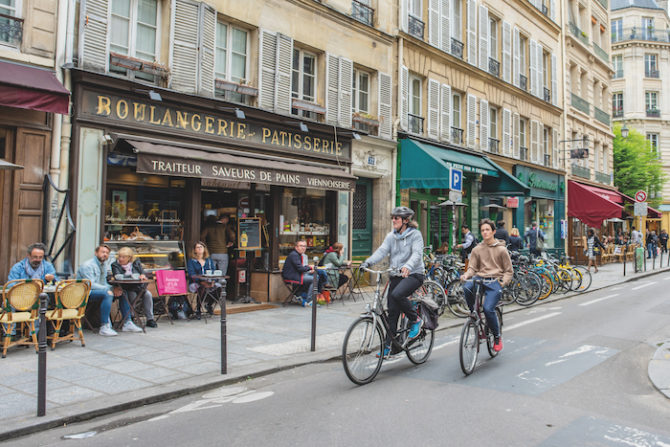 While Paris has not been known as a cycle-friendly city, all that is changing, with some 50km of bike lanes added in the past few months alone. Here, Caroline Harrap reports on the new craze that is sweeping the capital

It’s rush hour on the rue de Rivoli – the iconic thoroughfare that stretches through the heart of Paris – and, for a moment, the only sound to be heard is the dinging of bells. Where once this major artery would have been teeming with traffic, it is now dominated by bicycles. Other than a section of the street reserved for buses, taxis and emergency vehicles, here the cyclist is king.

It marks the culmination of a major change in urban policy for Paris, a city which has, historically, always had a love affair with the motorcar. But since Anne Hidalgo was elected Mayor of Paris in 2014, she has set about transforming the city into a world cycling capital, with an investment of more than €150m and the aim of doubling the number of bike lanes.

This policy was further boosted by the public transport strikes of late 2019 – and then, of course, along came Covid. With many people keen to cycle, rather than risk crowded transport, and others wanting new ways to keep fit, Hidalgo ushered in some 50km of pop-up bike lanes across the city. Nicknamed coronapistes, these segregated cycleways were an immediate hit and are now a permanent fixture.

“Cycling has become an essential part of life in Paris, especially in recent years, thanks to the commitment of the mayor,” says Corinne Menegaux, who is the director of the Paris office of tourism. “We already had more than 1,000km of cycling infrastructure, and much more has been rolled out since the health crisis, to enable Parisians and visitors to get around the streets of the capital safely. Bike tours, organised, for example, by Paris à Vélo or Paris Bike Tours, are also a real opportunity to discover Paris differently in a leisurely and fun way. And not forgetting that cycling forms part of our policy of soft mobility for a greener and more sustainable city.”

While there may be some way to go before catching up with cities such as Amsterdam and Copenhagen, things are definitely on the right track – and the figures speak for themselves. According to some sources, the number of cyclists in Paris has increased by almost 70 per cent since last spring.

Furthermore, it is estimated that up to 15 per cent of all trips in the capital are now made by bicycle – a figure that is borne out by the city’s bike rental scheme. Just a few weeks ago, the Vélib’ Métropole, to use its proper name, broke all previous records with some 209,000 rides in one day. The milestone of 400,000 subscribers has also been passed.

Then there was the government’s bike-repair scheme (now ended), through which €50 could be claimed towards the cost of keeping your bicycle on the road, and there was also a subsidy available for some new models. Sales in the last few months have soared, with sports retailer Decathlon reporting record figures.

Cyclists convene during an event in the city centre. Photo credit © Richard Ying

The bicycle boom is real,” a spokesman for the brand confirmed. “This is an observation that we have been making for some time – especially since the transport strikes – though the enthusiasm for cycling has been visible since 2018. More recently, the development of the cycle paths made many more people want to get on their bikes to go to work and run errands etc. The bonus of €50, the good weather during the first confinement and the fear of taking public transport also explain the phenomenon.”

Not surprisingly, the popularity in cycling is something that has been seen in many places since the pandemic. Better for the environment, it helps particularly in reducing air pollution – a factor known to worsen the symptoms of Covid. It’s also good for public health more generally.

What is more, cycling helps to connect people with their local neighbourhoods in a way that cars and public transport cannot. And, with less traffic on the road, it creates a better quality of life for everyone.

However, while many cities have embraced the trend, Paris has been at the forefront. Since the pandemic, it has implemented more cycle lanes than anywhere else in Europe, if the suburbs are included too. Then there’s the city’s car-free Sundays, in which several sectors are closed to traffic, as well as the areas where cars are banned altogether.

“There is no doubt that Paris stands out as a model to other European cities of what can be achieved,” says Morten Kabell, co-CEO of the European Cyclists’ Federation (ECF), which promotes cycling as a sustainable and healthy means of transportation. “The vision of the city’s leaders is unique in terms of the depth and coherence of its cycling policy. In the past, there were those who would say, well, yes, we can see how a mid-size city such as Copenhagen can achieve what it has, but the challenge is too great for a larger city. Now, though, we have seen a major metropolis decide to transform itself – and this sets a great example to others.”

Paris prides itself on being a cycle-friendly city. Photo credit © Caroline Harrap

So, if you’re trying cycling for the first time in the French capital, what do you need to know? Well, the good news is, not only is Paris relatively flat but it is also comparatively small. This means that as well as seeing all the central monuments by bicycle, you can easily cross the entire city. In terms of safety, while helmets are only compulsory for under-12s, they are strongly recommended. Also, cyclists must adhere to the French equivalent of the UK’s Highway Code, so have a read in advance. Last but not least, if you’ve never cycled in Paris before, it is quite an experience. It’s not uncommon to see people hurtling along hands-free – phone in one hand, cigarette in the other. However, you soon get the hang of things.

“There are so many people cycling now,” says musician Josephine Hall, who lives in the 16th arrondissement and bought her bicycle last summer. “It’s amazing the things you see. There are people who wear stereo speakers around their neck so you hear the music coming. There are grannies with all the protective flashing gear you can imagine. There are cyclists with umbrellas – and I even had to dodge a baguette the other day. It’s such a diverse look at life.”

Just a few final words of advice before planning your post-pandemic cycle trip. Bike theft in Paris is a problem, so it’s important to have a secure lock.

Alternatively, if you’re planning on renting, the Vélib’ is a great option – but it’s a good idea to familiarise yourself with the process first. Also, there are some streets which don’t have bike lanes, where even the most seasoned cyclists prefer not to venture, so, it’s best to plan out your route before setting off.

There has never been a better time to enjoy Paris by bike. Photo credit © Amélie Dupont, Paris Tourist Office

“Here in Paris, we were starting from quite a difficult place, as it’s a densely populated city with heavy traffic,” says Alexis Frémeaux, president of Mieux se Déplacer à Bicyclette (MDB), the leading cycling association in the Île-de-France region. “So, there is still a lot of work to do.

“However, we have also seen real change over the past few years with the creation of new segregated cycle lanes – and the possibility to cross Paris from north to south and east to west.

“Now, with the new additional 50km of bike paths, this is a huge step in the right direction – and, hopefully, it’s just the beginning.”

Looking ahead, the outlook for cycling in the city certainly seems positive. As France Today went to press, Hidalgo had just announced a new scheme to reduce on-street parking spaces by around half. There are also more cycle lanes to come.

So, who knows? Perhaps Paris could become the new Amsterdam. Back on the rue de Rivoli, amid the soothing whir of wheels, it certainly feels that way.

Notre-Dame is one of the many sights you can enjoy from the city’s cycleways. Photo credit © MDB

“For a really beautiful bike ride, you can cycle all the way from the Eiffel Tower to Notre-Dame in a dedicated cycle lane,” says Paris cycling expert Alexis Frémeaux. “Following the Left Bank, you get lovely panoramic views over the Seine – and it’s a wonderful way to see the city.”

Capital to the Coast

A brand-new 420km cycleway now connects the capital and the Normandy coast. Named ‘La Seine à Vélo’, the route follows the river through several different départements. Among the highlights are the Notre-Dame cathedral in Paris, street art on the Saint-Denis canal, Monet’s garden in Giverny, the historic city of Rouen and the Normandy beaches.

Plage de Deauville in Normandy is linked to the capital via a bike route. Photo credit © David Darrault, La Seine a Velo

Previous Article Alliance Française in the US Finds Success in Online Learning
Next Article Restaurant Reviews: Maison Aribert in Uriage-les-Bains