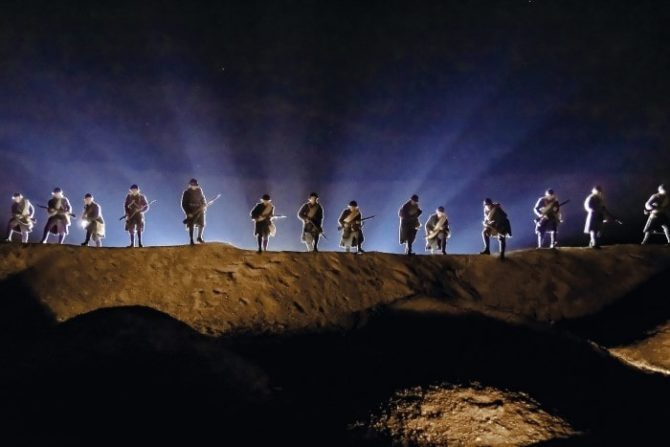 From hiking trails to cycling routes to kayaks, there are many ways to discover France’s war history. This article is part of a bigger feature on the Remembrance Trail in France.

THE WAR THROUGH NATURE
Post-war around Verdun in Meuse, after removing mines and surface clearance operations, 36 million trees were replanted and nature gradually regained its rightful place. The battlefield is now an open-air museum with its own ecosystem and protected species, and in 2014, the Verdun forest was awarded the Forêt d’Exception label. To hike in complete freedom, choose from four routes proposed to explore the history of this unique forest, with its unusual topography and ecological richness: the Douaumont trail (2km – 1hour), the Souville trail (2.7km – 1h30), the Froideterre trail (3km – 1h30) and the Vaux trail (6 km – 2h30). These hiking routes are available for download at www.meusetourism.com/en

EXPLORE BY BIKE
You can also visit some key Great War sites on two wheels. For example, take a tour of the Verdun trenches by mountain bike, accompanied and guided by an ‘animator’. Ride marked trails, dodging shell holes and taking in sites of historical interest and beauty spots as you go. Make your reservation at the Grand Verdun Tourist Office, departures from the Douaumont Ossuary. en.tourisme-verdun.com

AUGMENTED REALITY
In July last year, the French Prime Minister was on hand to inaugurate the new augmented reality experience at the Citadelle Souterraine in Verdun. The underground shafts and galleries under Verdun Citadel were dug between 1886 and 1893 and organised to accommodate and provide for 2,000 men. Protected from heavy bombardment, it was of primary importance in the 1916 battle. Today, visitors don special goggles and slip into the shoes of one of the four soldiers who were ordered to come down from the front and join the Citadel, with sound, projections and special effects combining with augmented reality to recreate their experiences. www.citadelle-souterraine-verdun.fr

SCARRED LANDSCAPES
25km northwest of Péronne near La Boisselle is the 21m-deep Lochnagar crater (called La Grande Mine on road signs), which was formed when 27 tonnes of explosives were detonated by the British on July 1, 1916, after tunnelling under German lines. It is a stark example of the brutality of the Somme offensive and the subsequent land scarification. lochnagarcrater.org

GREAT WAR COMES TO LIFE
For some less-than-light entertainment with a striking message, take in the extraordinary spectacle that is Des Flammes à la Lumière (“From the Flames… to the Light”) in Verdun. This son-et-lumière (sound and light show) features hundreds of actors and provides a very moving immersion into battlefield and trench life. Translation headsets are available, with the evening shows set to resume in the summer of 2022. spectacle-verdun.com 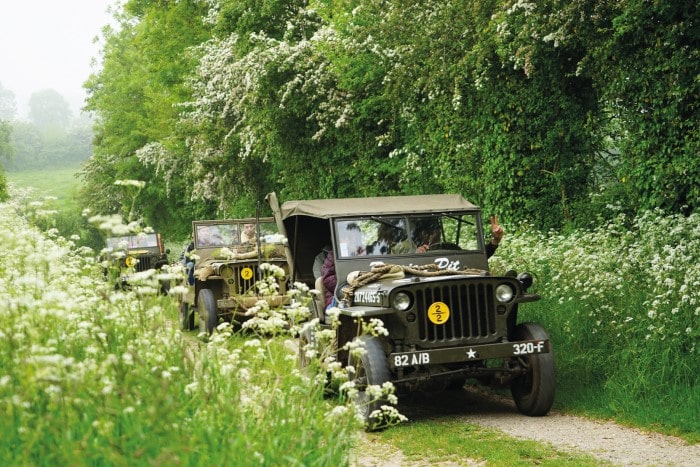 BEACH BIKES
For a D-Day landings history lesson with a difference, you can hire an electric fat-bike for an accompanied ride along Omaha beach. The bike does the work and you will have regular stops at bunkers and other points of interest for some historical titbits courtesy of an expert guide. en.normandie-tourisme.fr/fat-biking-on-omaha-beach

JEEP TOURS
Another mode of transport sure to excite and inspire is an authentic 1944 WWII Willys Jeep – the vehicle used by Normandy Jeep Tours to show visitors around the Utah Beach landing beach, drop and landing zones of the 101st & 82nd Airborne Divisions and other key D-Day locations such as Sainte-Mère-Église, Sainte-Marie-du-Mont, La Fière, Angoville-au-Plain, Hiesville and Ravenoville. Available year-round: the Jeep is equipped with a heater, doors and curtains! Price (three people maximum per Jeep) from €75 for a 50-minute trip to €270 for a half-day. www.normandyjeeptours.com

LIBERATION MUSEUM
If you are fresh off the ferry at Cherbourg, don’t miss the small Museum of Liberation sitting in an old fort atop the Roule mountain overlooking the port, 117 metres above sea level. In 1944, Cherbourg was perhaps the most important harbour in the world, and the museum tells the story of its seizure by U.S. troops on June 26 that year, making it the first port to be liberated, as well as the role played by the port during Allied operations. www.encotentin.fr 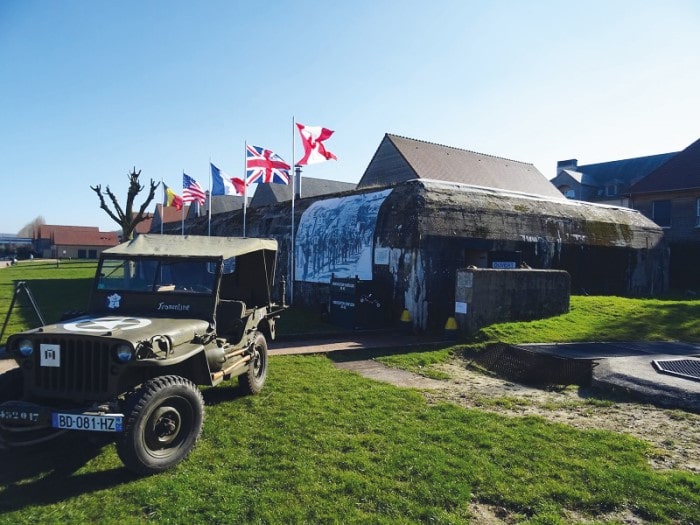 HISTORY IN HONFLEUR
When in the picturesque seaside village of Honfleur, check out one of its few remaining vestiges of World War II: the Blockhaus de la Gare. This preserved 350m2 German bunker housed up to 200 soldiers and its exhibition, covering 1939-1945, features over 50 period uniforms, documents and photographs. There is also a 45-minute film recounting the testimonies of the Liberation by soldiers and civilians. Entry €4, open April to August. www.honfleur-tourism.co.uk

RECALLING RESISTANCE
To complement your D-Day history tour, it’s well worth heading to Normandy’s museum dedicated to the Nazi Occupation and the role of the local Résistance – notably in helping downed Allied air crews via secret escape routes and hideouts. Located in Forges-les-Eaux, Seine-Maritime, the museum also looks at the consequences suffered by those caught resisting – deportation to Nazi camps – so the exhibition includes POW objects and uniforms in addition to firearms and propaganda posters used by defiant Normans. www.normandyresistancemuseum.com