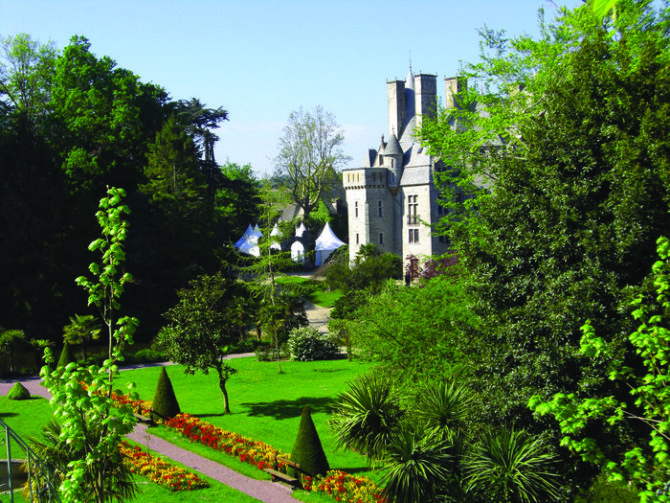 Where else would you find big sandy beaches, exotic plants and the deepest aquarium in Europe?

There are two ‘Jardins Remarquables’ in Cherbourg – Parc Liais on account of its non-indigenous species (including a Japanese azaelea over 100 years old and the only Brazilian jubaea spectabilis palm in France) and Parc des Ravalet for its attractive English and French style gardens and its impressive glasshouse rotunda.

To celebrate the 50th anniversary of Jacques Demy’s musical film, The Umbrellas of Cherbourg, there are guided tours of the locations used to shoot Catherine Deneuve’s scenes, plus an exhibition of film stills. You can also visit the city’s umbrella factory to see how Le Véritable Cherbourg is made.

La Cité de la Mer is a family attraction devoted to the deep sea. Inside are exhibitions on the Titanic (which called at Cherbourg on 10 April 1912) and Le Redoutable, the largest submarine open to the public. The cultural complex also houses the deepest aquarium in Europe with 4,000 fish.

Cherbourg is home to the top pleasure port in the west, so take to the water for some sailing, surfing, kayaking… or any other of the 20 watersports suggested by Contentin Nautisme. There’s something to suit all levels, adults and children alike.

6. Home of Art and History

7. Shop Til You Drop

In Cherbourg, you’ll find a market every day of the week, with the main ones being held at Place du Gaulle on Thursdays and Saturdays. The town centre is home to a wide range of shops and a shopping centre, Les Eléis, recently opened on Quai de l’Entrepôt.

The tourist office offers free guided tours of the city in English, most of which are geared around local heritage. In its heydey, Cherbourg was the most important port in the world!

9. Coast with the Most

There are some big sandy beaches in Cherbourg and Plage de Querqueville is one of the most popular with children. Close to Plage de Collignon is a campsite and swimming pool, while Plage de la Saline is a haven for walkers and cyclists. Enjoy the sea air!

This year, the calendar of free exhibitions includes the Tardi Biennial (a retrospective of the work of the father of modern comics) in July and Le Musée Fait le Mur, until September. There are free exhibitions this summer at Château des Ravalet and Abbaye du Voeu as well.

Previous Article How the Eiffel Tower Was Sold
Next Article Art in Paris: In the Time of Klimt, The Vienna Secession