Where should you go skiing in France? 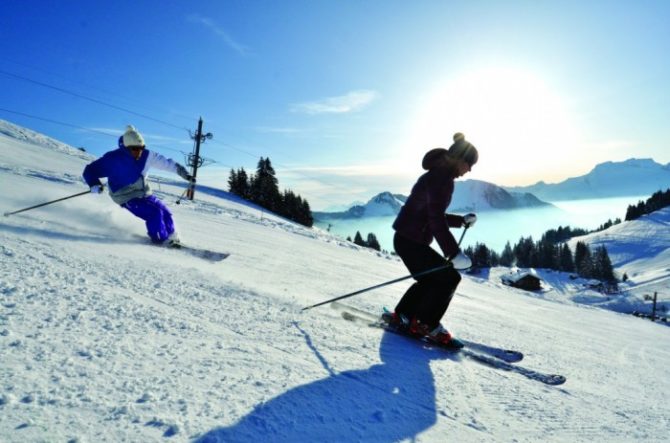 Time to slope off to France…

Travelling to France for a winter sports holiday is something of a ‘no-brainer’, particularly if you’re fond of skiing. France has the biggest ski area in the world, laying claim to an unbelievable 30% of the world’s surface area devoted to the sport. Any winter sports enthusiast would be hard pressed to resist France’s 1,180 kilometres of runs, over some of the world’s most beautiful mountainous terrain, which provide a lifetime’s worth of skiing holidays, with each trip offering up a new area to be explored.

France is home to 357 ski resorts within seven massifs, many of which enjoy great international repute, such as Courchevel, Morzine, Méribel, Chamonix. Many of France’s ski areas are linked by lifts and shuttles, which join together hundreds of kilometres of runs that can be conquered with a single ski pass.

Few other nations can claim such domination of the world’s winter tourist industry, with millions of visitors flocking  to the French mountains every year. The winter season is of  huge importance to France’s tourism industry, accounting for 18% of its total take.

Although the Alps, Pyrénées and Jura mountain ranges are astonishingly beautiful, it takes more than natural charms to draw back tourists year after year. France’s ski lifts are rated the best in the world and they’re as numerous as they are efficient – some 18% of the world’s ski lifts are currently trailing up and down French mountains. In addition, an engineering innovation led to the creation of a cable car linking the two ski areas of La Plagne and Les Arcs, which is capable of transporting 200 people at once – that’s the biggest capacity of any cable car in the world.

Not keen to ski?

It’s no secret that France is mad on skiing. But an ever-increasing range of outdoors activities are available for non-skiers so there’s a magnitude of ways to enjoy the mountains that don’t include careering down a steep, slippery slope.

Snowshoeing is growing in popularity and is increasingly found at ski resorts in the Alps and Pyrénées. Strap on your raquettes (which do, as the name suggests, resemble tennis rackets) and discover the mountains in all their glory at walking pace.

Don’t fancy trekking? You can always hop in a sleigh dragged by husky dogs or ponies, or take a break from the mountain altogether – most resorts have thermal spas, and many have  ice skating rinks, cinemas and gourmet restaurants, too.

When it’s time to venture back into the great outdoors, more daring visitors can try their hand at some of the more weird and wonderful winter sports on offer at some French resorts. Under-ice scuba diving is one of the most surreal and adventurous activities that you can find – in any case, this holiday activity would certainly deserve a page in any family history! Above ground, there’s snowkiting, paragliding and snow biking, which  are enough to placate any daredevils, not to mention speed-riding – a mixture of skiing, paragliding and parachuting!

Whatever adventure you’re looking for, in a matter of hours you could be standing atop a valley blanketed by freshly fallen snow, surveying a seemingly eternal landscape of timeless splendour – those important ski passes serving as passports  to a crystalline playground that provides endless fun and awe-inspiring beauty. And then there’s the après-ski…

So where should you go skiing in France?

◗ Les Karellis – Great for families with very young children. Equipment for babies and toddlers is provided free and there are ski lessons and a snowy playground on site.

◗ Besse-Super-Besse – Situated on the Massif du Sancy, far from the tourist hub of the Alps, this resort’s childcare facilities have recently been revamped. The organised activities for young ones include pony riding, skating and a cinema.

◗ Courchevel – The Moriand ski area in Courchevel is perfect for beginners, who can take their time on gentle nursery and beginner slopes without being cut up by speedy show-offs.

◗ Morzine – Boasts wide and gentle slopes separated from the main ski traffic, yet still on the main mountain piste, which are great for building confidence on your skis.

◗ La Plagne – Extensive ‘blue’ and ‘red’ runs provide plenty of variety and the sense of exploring new places each day without venturing too far out of your comfort zone.

◗ Flaine – The Grand Massif ski area is right on Flaine’s doorstep, offering 141 runs over 265km, which is ideal for progressing your skills throughout your stay.

◗ Chamonix – Renowned for its style and glamour, this deluxe resort also has some of the Alps’ most demanding ski terrain, including hair-raising off-piste trails.

◗ Val d’Isère – The most popular skiing resort amongst Brits, ‘Val’ suits intermediate skiers thanks to its huge range of high-altitude runs, which also provide an exciting variety of challenges for those with advanced skills.

◗ Sainte-Foy-Tarentaise – An extensive off-piste ski area makes this village in the Savoie an exhilarating playground for adventurous skiers.

Best view in the French mountains:

◗ Aiguille du Midi – The treacherous, 9,000-feet climb in a cable car, which at times almost scrapes against the steep, craggy mountain face during its 20-minute ascent, is totally worth the reward at the top. Intrepid passengers are rewarded by dizzying views from the lookout post, stretching across an endless sea of snowy alpine peaks, with Mont Blanc jutting into the vista on a clear day. As you’ll be 12,500 feet above sea level, prepare to feel very, very cold – and possibly even have a bout of altitude sickness!

Previous Article Where to Eat in Strasbourg: Brasserie Les Haras
Next Article Find the Perfect Boutique Hotel in France with MyBoutiqueHotel.com