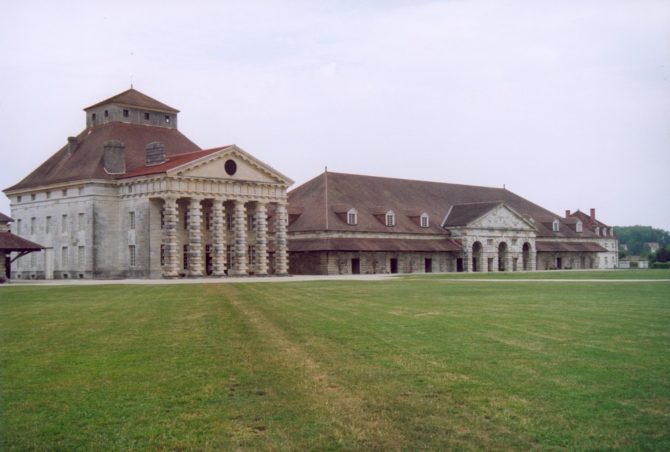 Deep in the Jura mountains, the département of Le Doubs is a portrait in miniature of France at its finest—an almost untouched natural landscape of forests and waterways, scattered with captivating towns and villages rich with ancient heritage.

Extending over some 115 square miles in the eastern region of Franche-Comté, between Besançon and the Swiss border, Le Doubs (rhymes with you) takes its name from its major river—a name derived from the Latin dubious, meaning vacillating, and probably a reference to the river’s snaky, sinuous, direction-changing course.

Well off the principal tourist tracks, Le Doubs is a symphony in green during the summer, when the river is a paradise for fishermen and kayakers; in winter there is cross-country and downhill skiing, skijoring (pulled by a horse), snowshoeing and sleigh rides, all practiced here on a human scale, with great respect for the environment. And although it seems remote, it’s a scant three hours from Paris to Mouchard on the TGV high-speed train.

Not far from Mouchard, Arc-et-Senans is well worth a visit for the Saline Royale (Royal Saltworks) alone. An extraordinary architectural ensemble built in the 18th century for Louis XIV and now a UNESCO World Heritage site, the unique array of eleven crescent-shaped buildings is a stunning profusion of pillars and porticoes. Architect Claude-Nicolas Ledoux dreamed of a model factory completely encircled by an ideal city, a project that was never realized.

His original commission was quite ordinary: a salt-production facility on the edge of the forest of Chaux. Drawn from the salt springs at Salins-les-Bains (now also on the World Heritage list), salt water was routed through 13 miles of underground channels into cauldrons at the salt works, where it was evaporated over wood fires. It’s hard to imagine today the importance of this “white gold”, and the economic role of the saltworks, which remained prominent until 1895. After many vicissitudes, the site now houses a fascinating museum dedicated to the works of Ledoux; it also welcomes researchers and artists in residence, and hosts a garden festival from June to October. You can even sleep there—in one of 30 guest rooms renovated by architect Jean-Michel Wilmotte. Currently, the Saline Royale is also providing a temporary home for the collection of the Musée Courbet in nearby Ornans while the museum is closed for renovation.

Ornans lies on the banks of the Loue River. Built at water level, the ancient houses of this “Petite Venise Verte” are remnants of an earlier age. Ornans is proud of its most famous son, 19th-century artist Gustave Courbet, and the museum in the lovely home that was his birthplace is scheduled to reopen in 2011, along with the studio in which he lived and worked until 1873, when he went into exile in Switzerland.

Courbet’s work is imbued with love for his native Franche-Comté, to which he devoted no fewer than 300 landscapes. Fourteen of those paintings show the spectacular source of the Loue River, located near the village of Ouhans, in a breathtaking mountainous cirque, a natural amphitheater caused by glacial erosion. Not far away, the Courbet family farm in Flagey is an ideal starting point for hikes in the footsteps of the artist. For as long as she lived, Courbet’s sister Juliette kept his memory alive at the farm; today it has an exhibit space and a café-bookshop, and also offers three guest rooms.

A lovely walk on small country roads leads to Nancray and the Musée des Maisons Comtoises, an open-air museum dedicated to traditional regional houses. Scattered over the outdoor museum’s 37 acres are examples of all the styles of local dwellings, agricultural buildings and forest shelters—all transported here stone by stone. Twenty-nine buildings ranging from the 17th to the 19th century, modest or affluent in style, evoke the daily life, work and popular beliefs of bygone eras. The star of this eco-museum is the ferme à tuyé, which was intimately linked to the life of the peasants of the Haut-Doubs. The tuyé, a structure with an immense pyramid-shaped fireplace, functioned both as a pantry and an emergency exit when snow blocked doors and windows; it was also a space for entertaining guests and a smokehouse for meats.

Montbéliard is perhaps the most surprising of the main cities in the Doubs. The seat of an independent medieval comté, the town became a Germanic enclave after the 1397 marriage of Henriette d’Orbe, of the Montfaucon family, the only heir of the comté, to Prince Eberhardt IV of Wurtemberg. The Principality of Montbéliard spent four centuries as part of the Germanic Empire before becoming part of the new French Republic in 1793.

That past lingers in the town’s distinctly Germanic atmosphere, tinted with Italian accents. House facades are painted in shades of ochre, lilac or salmon, and the 18th-century château, perched on a rocky spur, is attached to the stocky 15th/16th-century towers of the earlier castle. Don’t miss the Logis des Gentilshommes, adorned with the volutes typical of Swabian architecture, built by 16th/17th-century architect Heinrich Schickhardt, who brought the late Renaissance to Montbéliard. And in the château, be sure to see the small museum dedicated to Georges Cuvier (1769-1832), the father of French paleontology, who was born here.

In fact, science and industry owe much to the Montbéliard region, which bred many inventors. The best known is Armand Peugeot, founder of the automobile firm. The Aventure Peugeot museum in Sochaux displays a fabulous panorama of the company’s history, from its motorized quadricycle to the most futuristic prototypes. Another inventor, Frédéric Japy, revolutionized clock production at his factories in Badevel. And Etienne Oehmichen developed the helicopter in Valentigney.

With over 600 miles of marked trails, Le Doubs is France’s uncontested capital of cross-country, or Nordic skiing. In 2010 it hosted both the Transjurassienne, an annual long-distance race that attracts over 3,000 competitors, and the Nordic Combined World Cup.

Even if you’re not a fan of snow vacations, you’ll enjoy a weekend in Métabief. A favorite resort of mountain bikers, it offers trails for cyclists of all levels that cover the slopes and 4,800-foot summit of Mont d’Or, with stunning views over the Alps. Some of those trails descend to the Lac de Saint-Point, France’s largest natural skating rink. Here the mountain feels cozy and comfortable, and welcoming to gourmands, with tastings of Comté and Mont d’Or cheeses, paired with a glass of local Bugey wine.

Not far from Métabief, Rochejean attracts adrenaline addicts who are fans of snowtubing, a sport related to bobsledding. Sitting, standing or lying on giant inner tubes, riders race over bumps and turns at high speed. Smaller resorts like Les Fourgs, Morteau and Charquemont are favorites with families, offering both ski schools and child care. Here the terrain of Le Doubs rhymes with doux—so gentle that even toddlers can start to ski.

Valentigney La Maison de Juliette, six miles from Montbéliard, is a lovely bourgeois residence carefully restored by Françoise and Christian Gauthé, with one suite, Les Mésanges, and an adjoining room, Les Violettes. The atmosphere is serene, the colors muted and the veranda overlooks a garden with hundred-year-old trees. From €95. 8 rue des Combes Saint Germain, 03.81.91.88.19. website

Jougne Hôtel la Couronne, near the Métabief-Mont-d’Or train station, is a charming two-star hotel in an 18th-century home recently renovated by chef Jean-Claude Dumas and his wife Christine. The 11 rooms and suites are snug cocoons with panoramic views of the Jura. From €71. 6 rue de l’Eglise, 03.81.49.10.50. website

Métabief Alpage de Lou M’Tobie, a complex of chalets in a mountain pasture, with wood-chip-burning stoves in the living rooms, modern bathrooms and well-equipped kitchens. Spa and sauna in the main building. Rentals by the week.  15 ave des Prés Verts, 03.81.49.40.33. website

Montlebon Le Greniers de Meix Lagor is a mountain retreat composed of six small, beautifully restored 200-year-old greniers-forts, small wooden cabins once used to store grain, grouped inside a vast Comtoise farmhouse. Salon, fully equipped kitchen, sauna and a Jacuzzi in an antique copper vat. Cross-country skiing and dogsledding are at the doorstep. Group rentals only, up to 15 people. website

Original published in the January 2010 issue of France Today; updated in January 2013