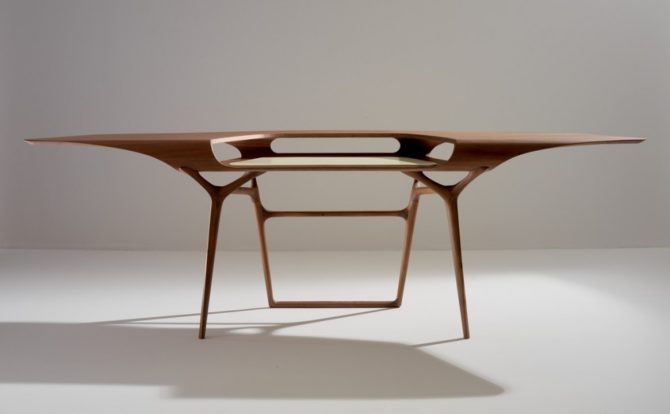 Young French designer Noé Duchaufour-Lawrance is flying high. In 2012, he imagined such lofty perches as Megu, the new Japanese restaurant in the Alpina Gstaad hotel, and the Ciel de Paris bar, the pinnacle of Parisian panoramas on the 56th floor of the Tour Montparnasse. His latest is three-star chef Yannick Alléno’s epicurean summit, the Yquem Private Dining Room at Paris’s Hôtel Meurice.

In all three, alluring curves and warm, natural materials delight the eye and soothe the senses. His head-turning furniture designs include the Manta desk for Ceccotti, an airy structure with the elegance and sleek lines of a vintage racing yacht; Calla, a seductive and sinuous leather-and-wool-upholstered chair for Zanotta; and the polished ergonomics of the Corvo armchair for American manufacturer Bernhardt Design—a complex industrial tour de force based on the tension between different thicknesses of wood, all assembled by hand.

Tracked down in his off-the-beaten-track studio in an unmarked passage near the Bastille, the soft-spoken, 38-year-old designer, whose words whizz at TGV-speed, explained what’s behind his idea of design.

What is the role of design in the world today?

Function is fundamental. Industrial designers must follow the advances in the rail, aeronautic or electronic fields. But in furniture design, the first thing that starts me off is the poetic dimension. The chair has not really evolved in a hundred years. Yes, there are spectacular chairs, but there has not been a real revolution.

Is there a style or school of French design with characteristics in common?

What we have in common is that we all have very developed egos, and we all have an individual desire to do something away from a collective movement, contrary to the English and Dutch. We don’t have a school, but we have a real, anchored tradition in the decorative arts. We don’t have a contemporary furniture design industry like the Italians, but that gives us more liberty to imagine, to dream.

You had success very early with the celebrity restaurant Sketch in London in 2002. Did that change everything?

Not for me. Just recently I met someone who thought Marc Newson and Ron Arad had created the space. In fact, Arad did a desk for the entrance and Newson did the food trolleys. Two other architects and I did 80 or 90 percent of it. I worked for three or four years on it, but I never had a real title, and the plan was catastrophic. In the end, it turned out alright. And I realized I wanted to create my own company—Neonata— and be alone with my computer. I started doing furniture for Ceccotti, and that led to the Alain Senderens restaurant in 2005. But it was when I was named designer of the year for Maison&Objet in 2007 that it all really took off.

The difference is fundamental. Design is linked to reproduction, mass production. Art is the unique piece, and that is what creates its value. A designer is obliged to make things that function, and he isn’t about to make a €100,000 mold to produce one or two objects. Design is a vocation in which you are happy to have commercial success. An artist doesn’t need his work to tell a story; a designer expects his objects to speak for him, and it must be in a language everyone can understand.

Yet there seems a real sculptural link to your design, and you do describe your furniture as being on the brink of abstraction.

Yes, my Manta furniture is like a functional sculpture. I used to have a large desk full of objects everywhere—it was real chaos. But with the Manta desk, everything can be organized in an hour. Things almost arrange themselves.

For me, the eye caresses each object before the hand does. After clothing, furniture is the second thing that interacts directly with the body, and you can have a sensory relation with it. I’m inspired by nature, not necessarily in the exact form—making a wooden chair leg in the shape of a tree branch, for example—but in a more general way, so that like a tree with a superb bark you will want to touch it.

The Borghese banquette is very figurative, with a dose of abstraction. The back is a metal network of branches that supports cushion forms inspired by the parasol pines of the Villa Borghese in Rome.

I always like to design things from both sides, front and back. I’ve never understood someone who says it’s all right to push the bed against the wall and not see the back. I think the Buonanotte Valentina bed I did for Ceccotti is the most interesting when it’s viewed from behind—the curved back made of wooden slats was inspired by the horizon of Tuscan hills at sunset and the sun setting on the sea.

Haven’t you always used a lot of natural materials like wood and leather?

Yes, but now I also adore Corian, and Soft Touch paint that looks like velvet. I used it for my Naturoscopie exhibition at Galerie BSL [in Paris]. For that I didn’t work with natural elements, but with materials that responded best to the emotion I was trying to translate. For example, I used carbon covered with a Soft Touch paint to make a velvety contrast with the honeycomb aluminum of leather-covered shelves. They were inspired by the kind of molecular structures you see under a microscope, in a cell or a slice of wood.

There was a black platform with big waves, as if it had been extracted from the sea. My grandfather was a professor of soil science—as a child, I used to make core borings for him. My parents were always respectful and attentive to nature and the environment. I learned to respect those things, and look at them differently. I spent years walking on the beach, diving and looking. Now, to hold onto that, I go back to the sea when I can.

I’m nourished by my childhood—the sea, the rocks, the horizon, the life of Brittany— not always precise moments, but diffuse emotions, like a perfume.

Sometimes I do a project without knowing what’s behind it and sometimes there is a direct connection—but both come from the long-term memory anchored in your unconsciousness. It’s something older, something you know, and that I can find sometimes when I am drawing.

You draw everything by hand. Is there something emotional in the paper, the pencil?

Completely, I need the dimension you get when you’re working by hand. You don’t have the same emotion in front of a computer.

Originally published in the January 2013 issue of France Today