Le Jardin d’Èze: A Jewel of the Côte d’Azur 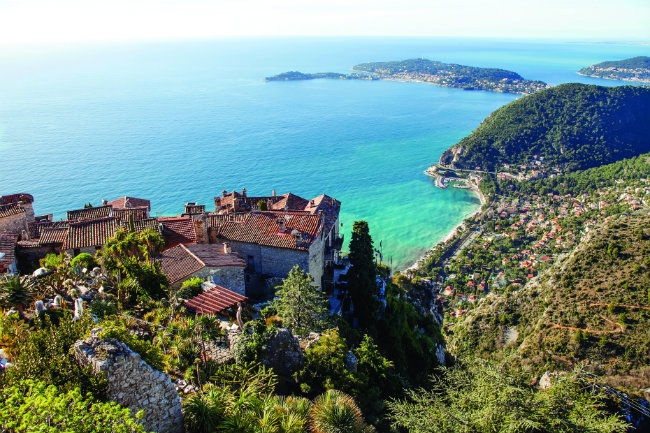 The hilltop village of Èze, perched atop a dizzying drop straight to the Mediterranean, is dramatically beautiful in the traditional Provençal style. Èze is a warren of cobbled streets and flower-covered stone houses, their slatted shutters diffracting the hot rays of the Riviera sun beating down upon the red-tiled roofs. A crumbling medieval castle occupies the hill’s highest point, green shrubbery slowly claiming its walls and tumbling towards the gardens below.

From this vantage point, the panorama extends all the way from Italy to Saint-Tropez. On a clear day, Corsica can be made out on the horizon, isolated by a glittering expanse of azure sea. The castle was destroyed in 1706 during the War of the Spanish Succession and rebuilt following World War II under the direction of the then Mayor of Èze, René Gianton. The designer of the Exotic Garden of Monaco, Jean Gastaud, assisted in the creation of the garden at Èze, bringing to the village many of the ideas he put into place in Monaco – principally, the acquisition of the rarest exotic plants.

Èze is wildly popular among visitors to the region, especially those travelling between Nice and Monaco, partly due to its spectacular gardens. Paved walkways wind around the hill’s steep peak, through lush beds of exotic plants, tall cacti and low-lying shrubs framing the mesmerising view.

The splendour of Èze lies in its dramatic setting, but the village would be incomplete without a fitting viewpoint from which to admire it. The Jardin d’Èze provides a contemplative and artfully designed retreat where visitors can learn of the village’s history and rest on a bench, musing over the view. The botanical gardens in Èze are lush with plants from all corners of the globe, many of which originate from the tropical forests and the drier areas of Africa and America. The garden boasts one of the most diverse collections of cacti that you’ll find this side of the Atlantic, with specimens from Mexico and Argentina. South African euphorbias carpet the ground, the pale green spikes of agaves and aloe jutting out between them. Lilies and wild Mediterranean flowers perfume the air with their scent, their vibrant hues rose-tinting the view.

Sculptor Jean-Philippe Richard created a series of 15 stone statues of ‘earth goddesses’ to embellish the garden, which add a poetic dimension to the experience of strolling around. These stone pieces recall Classical Greek sculptures, celebrating femininity and the relationship between the beauty of both the physical and ephemeral world. Their style draws from contemporary fashion design graphics and also the work of the Belgian Symbolists of the late 19th century.

Each sculpture has its own identity, defined by a short poem written by the artist himself. Greek mythology and feminine mystery enshroud the statues, which marry divine purity with earthly femininity in an idealistic form, to link the globe with the heavens. What a fitting image this is for a strikingly scenic village in the clouds, reaching towards the skies and gazing over the earth below, and whose very name is said to be a tribute the goddess Isis.

A Moment of Calm

Below the ruins of the 12th-century castle, visitors will find a garden set back from the village’s alleyways which has been designated for rest and contemplation. Based upon the medieval tradition of segregating a place for personal thought and introspection, this is a space in which you are encouraged to relax, read and dream.

The trickle of a fountain feeding into a small ornamental pool is the only sound to break the peaceful silence which accompanies the flower-framed vista.

Although it is open year round, the best time to visit is during the summer months – either on a crystal clear morning or a balmy evening, when opening hours are extended to make the most of the last embers of summer sun.

Previous Article Driving to the Corniche des Cévennes
Next Article Evenings Out in Paris: Thomas Dutronc at the Casino de Paris