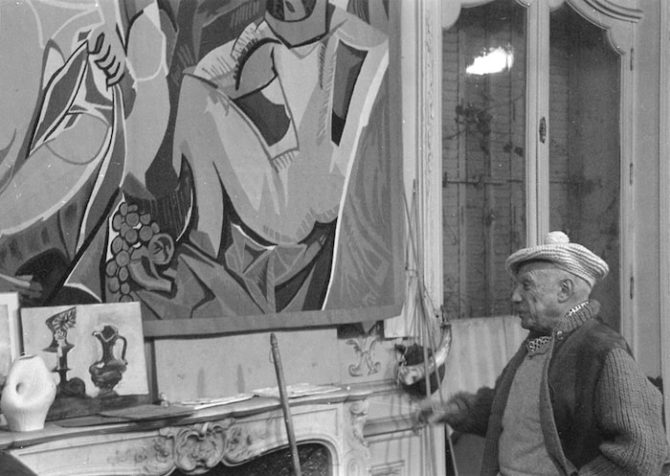 If you’re a Picasso fan, seeing his painting Les Demoiselles d’Avignon is key. The nude prostitutes have angular and disjointed body parts, two have African mask-life features and the painting’s perspective is a flat plane. It’s considered to be one of Picasso’s groundbreaking works in his early development of both cubism and modern art. Painted in 1907, the original can be seen in New York’s Museum of Modern Art.

Forty-one years later, Picasso created another groundbreaking Demoiselles d’Avignon, but this time the medium was tapestry. It was groundbreaking because it was a collaboration with Jacqueline de la Baume Dürrbach, a master weaver in Cavalaire on the French Mediterranean coast. She was given more freedom to interpret the original masterpiece using tapestry techniques and not create a rigid reproduction as earlier modern artists required of their tapestry versions. 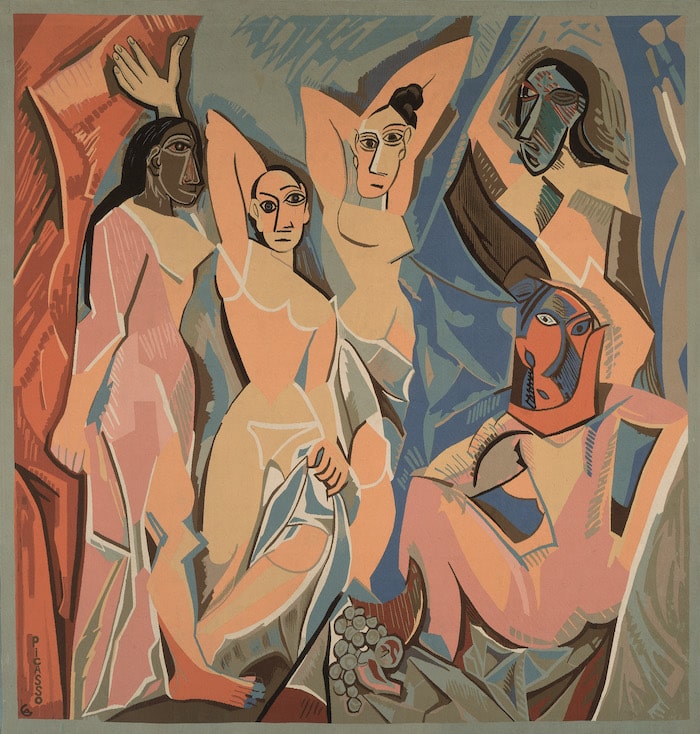 “Philosopher Richard Wollheim asked the question what if visual arts could be interpreted the same way as music?” said Karmel. “A composer writes a score and it’s interpreted by other musicians, so what if visual arts were like that? The Picasso/Dürrbach tapestry is an example of an original composer allowing a musician to realise the composition the way they want. The result is really beautiful.”

Picasso became involved with creating tapestries in 1928 when he worked with Marie Cuttoli, an influential French art entrepreneur, who commissioned a variety of modern artists to have their work made into tapestries. Although initially the tapestry artists, or weavers, exactly recreated the painter’s work, the reality is that the weavers are artists too and began to reinterpret paintings to fit the special techniques of weaving. The result was an ongoing controversy where some artists didn’t want any interpretation allowed by the weavers while others had no problem.

Picasso was one who was open to Dürrbach’s interpretation. In 1951, the two collaborated with Picasso’s Pierrot and Harlequin which he painted in 1920. They worked so well together that the next project was his 1937 painting of Guernica. Dürrbach reinterpreted the original painting’s shades of grey to weave her piece in light brown, tan and cream tones which Picasso called a “masterpiece,” but the tapestry was criticised because it was different than the original. However, it was commissioned and admired by Nelson Rockefeller who later donated it to the United Nations where it’s now displayed at the New York headquarters. 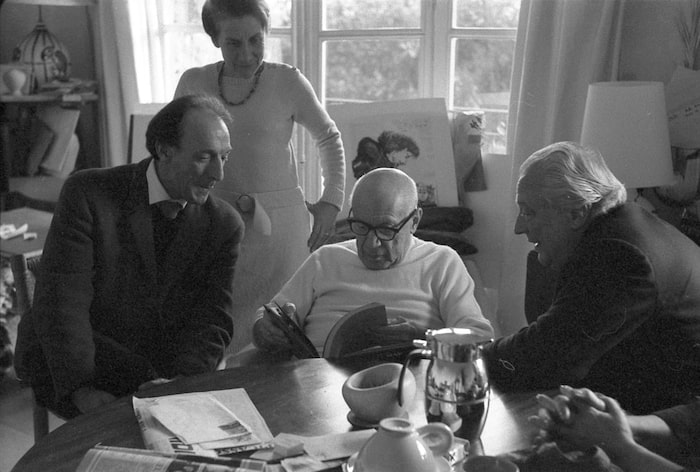 Next up was Demoiselles d’Avignon, but Dürrbach first wrote Picasso a letter where she requested more freedom in her interpretation of his work.

“Picasso said ‘yes’ and the letter explicitly spelled out that she became the creator inspired by Picasso,” said Karmel.

Weaving is a different way to interpret lines, shapes and colour. While the basic design is in the form of a large-scale cartoon, or drawing, the interpretation of the cartoon in tapestry threads is where the art of the weaver takes over. Weaving is taking one thread from a bobbin (or broche) in a horizontal line (the weft) through a mass of vertical threads (the warp) that make up the structure of the tapestry. Very different technique than painting.

According to Karmel, Dürrbach made three major changes in her tapestry creation. First, she simplified the number of colours with a limit of 13. Painters often blend colours creating a wide variety of shades and Dürrbach eliminated that. 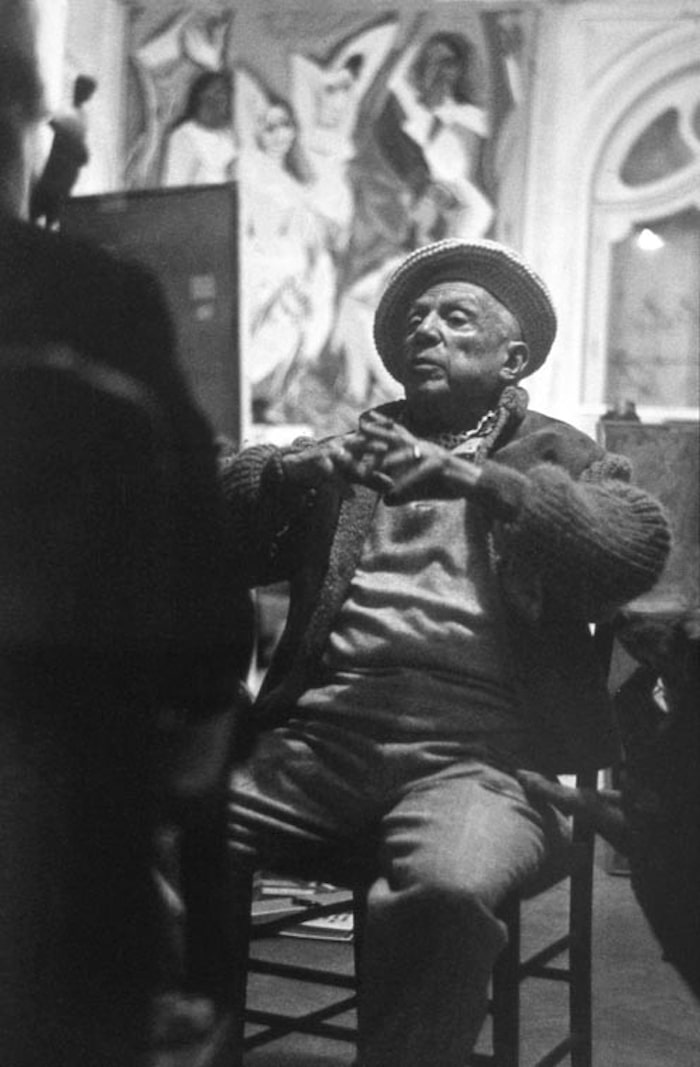 Second, the colour areas are purer with hard edges that don’t reflect a brush stroke’s blur.

“The distinct gradations look more modern, like a 1960s painting,” said Karmel. “The 1907 original was out of Picasso’s Rose Period where he shaded things to modulate form. This modulating vanishes in tapestry. The edges are sharp.”

Third, as a replacement for the gradations and shading, Dürrbach used multiple types of hatch marks. Angled hatch marks define buttocks, arms and bodices and they are a stronger part of the African mask-inspired faces.

“Using the hatch marks all over unifies the painting,” said Karmel. “The tapestry version of Demoiselles d’Avignon represents a unified version that Picasso never got around to.”

Picasso loved the tapestry too and displayed it in his La Californie studio in Cannes, France. He told visitors and other artists that the different colours are “precisely what appeals to me.” According to historian John Richardson, Picasso said the tapestry was “far better than the original.” 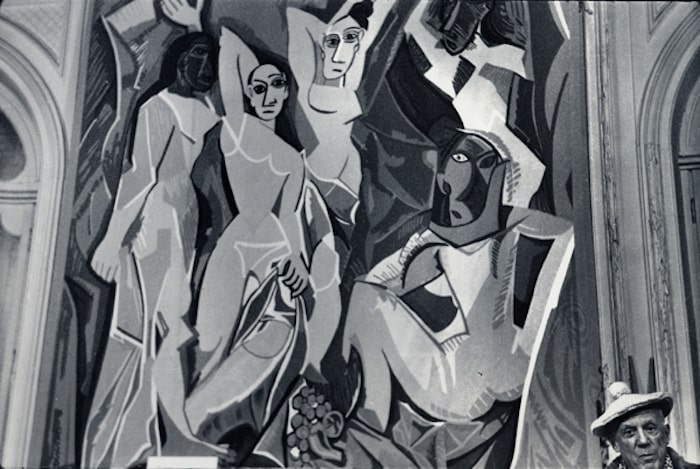 Dürrbach actually had a strong reputation in the French tapestry world as an artist who translated the works of leading masters into this new – or actually old – form. Although she wove works of her own design, she also partnered with a variety of cubist artists besides Picasso, including Fernand Léger and Sonia Delaunay. She participated in many exhibitions and held one-person shows at the Musée Picasso in Antibes in 1955 and the Musée des Arts Décoratifs in Paris in 1959.

André de Persine, who wrote the catalogue essay for the Tapisseries d’Interpretation Libre (Freely Interpreted Tapestries) exhibition in Paris in 1961, described this art of translation as “taking on such an important role that the created works acquire their own life, independent from the models that have inspired them.”

A lot of great works of art have been transformed into tapestries, and many tapestries are great art on their own. But Les Demoiselles d’Avignon is one of the few that are signed both by the painter and the weaver. Dürrbach’s trademark A within a C is at the lower left of the tapestry just below Picasso’s signature woven in block letters. Perhaps her signature stands as a base for her great interpretation of a masterpiece that stands as one of her own masterpieces too. 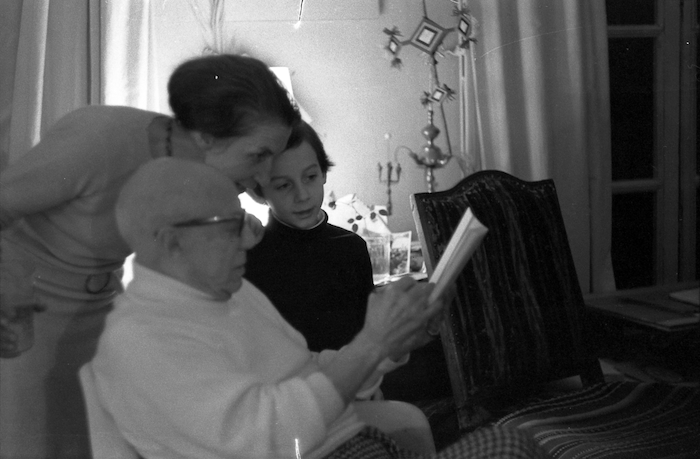 Previous Article Off the Beaten Track Around Burgundy
Next Article Biking in the Buff: Cyclonudista Arrives in France for the First Time