Off the Beaten Track Around Burgundy 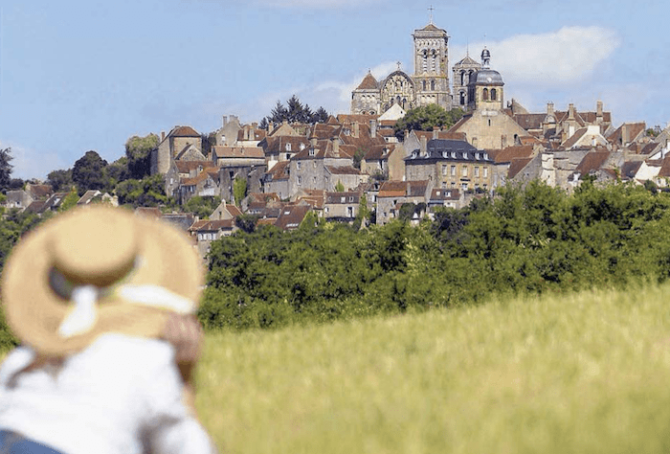 While it may be most famous for its celebrated wines, the region of Burgundy is also full of surprises, as Caroline Harrap discovers on a back-in-time tour of its lesser-known treasures

Standing atop a small hillside, deep in the forests of northern Burgundy, it feels for all the world as though we have just stepped back in time. In the clearing before us, workers clad in woollen smocks are tapping away with hammers and chisels, while a blacksmith is busy forging tools. Beyond them, rising from the landscape like something out of a dream, a full-size medieval castle is taking shape in front of us. 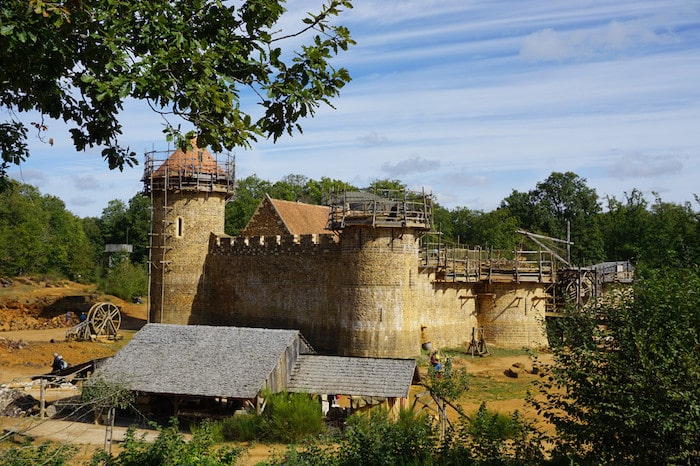 Contrary to appearances, however, we haven’t fallen into a stupor after one too many of the region’s famous wines, nor have we wandered onto a filmset. In fact, this is Guédelon – where a team of master-builders is creating a 13th-century château from scratch. It’s an extraordinary example of experimental archaeology in action and a chance to see history in the making before your very eyes.

As it turns out, this is just one of many unexpected wonders to be found in the region of Burgundy – or Bourgogne-Franche-Comté, to give it its proper title, following the merger with its neighbour in 2014. Indeed, take the time to explore beyond the well- worn paths of the vineyards – with their celebrated chardonnays, chablis and pinot noirs – and there’s a treasure around every corner. And that’s not to mention the rolling countryside, fairy-tale châteaux and renowned gastronomy. 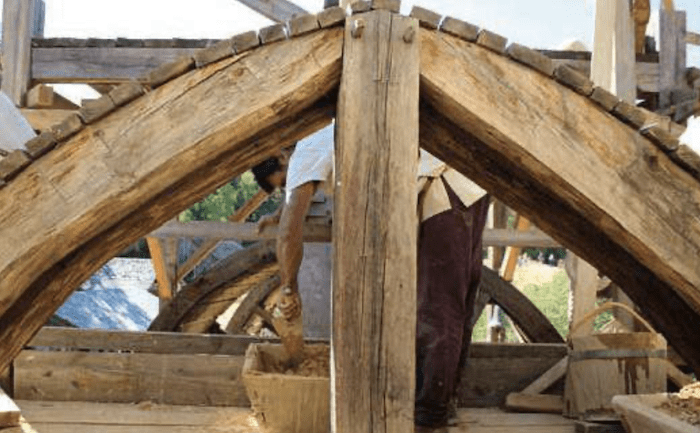 We begin our own tour in the historic city of Sens, having arrived on the train from Paris in the blink of an eye. Of course, that’s the other thing about Burgundy – it’s so brilliantly accessible. Located just 120km south-east of the capital, the train takes less than an hour. So, if you’re travelling from the UK on the Eurostar, you can be there in time for lunch.

Situated at the northern gateway to Burgundy, Sens was once a great Gallo-Roman city and also a capital of Christendom. As such, the star of the show here is the magnificent place of worship at its heart, the 12th-century Saint-Étienne, regarded as the first of the great Gothic cathedrals in France. Renowned in particular for its pioneering ribbed vaulting, it was also an important precursor to Notre-Dame. Indeed, another highlight is the remarkable stained-glass windows that span the history of the craft from the 12th to the 19th centuries – including two stunning rose windows. 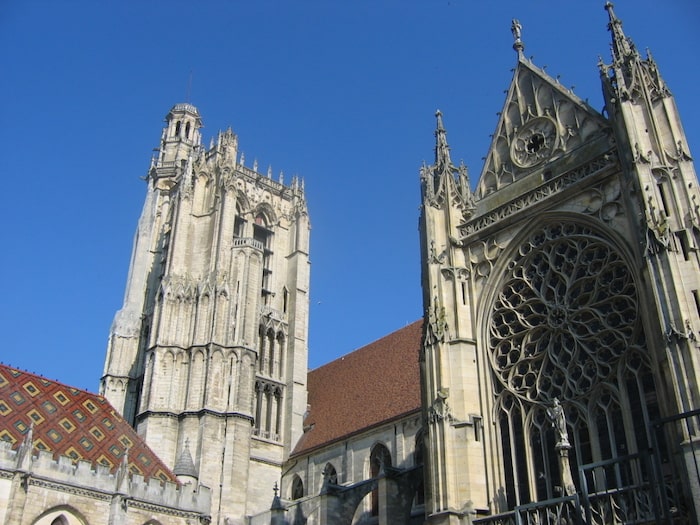 It’s best to bring binoculars to fully appreciate this kaleidoscope of colour with all its rich religious detail – including the story of Thomas Becket, Archbishop of Canterbury, who spent four years in Sens during his exile (spoiler alert: it doesn’t end well). Aside from the 13th-century window depicting his life, you can also see his recently-restored vestment – regarded with an almost supernatural reverence – in the fascinating museum next-door. Also, 2020 marks the 850th anniversary of his death in 1170, so look out for special events on both sides of the Channel.

Incidentally, spare a thought for the local brewery that decided to name a range of beers after the saint using the aforementioned window as their inspiration. Only thing is, they accidentally picked the wrong person and their ‘Thomas Becket’ beers now feature a picture of someone else entirely. 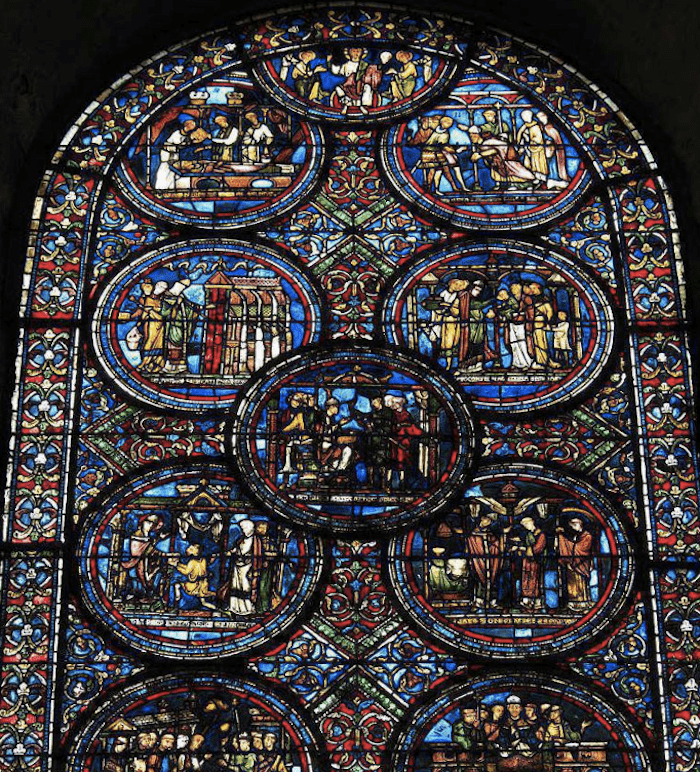 That evening, we spend the night at La Fausse Sauge – a private hamlet, near Mézilles, in an exceptional natural setting. Here, the owner Beatrice has spent several years restoring the former farm buildings to create a selection of luxurious apartments, along with an indoor pool, Finnish sauna and cosy dining room. Later, we all tuck into a veritable feast together, washed down with what else but fine Burgundy wines and, in some cases, ‘faux’ Thomas Becket beer.

The next day, we set off on a pilgrimage of our own to another major site of Christendom, the charming hilltop village of Vézelay, on the edge of the Avallonnais. Officially designated one of the most beautiful villages in France, the steep, shop-lined street takes you up to the breathtaking basilica of Sainte-Madeleine – a UNESCO World Heritage Site – with spectacular views over the surrounding landscape. 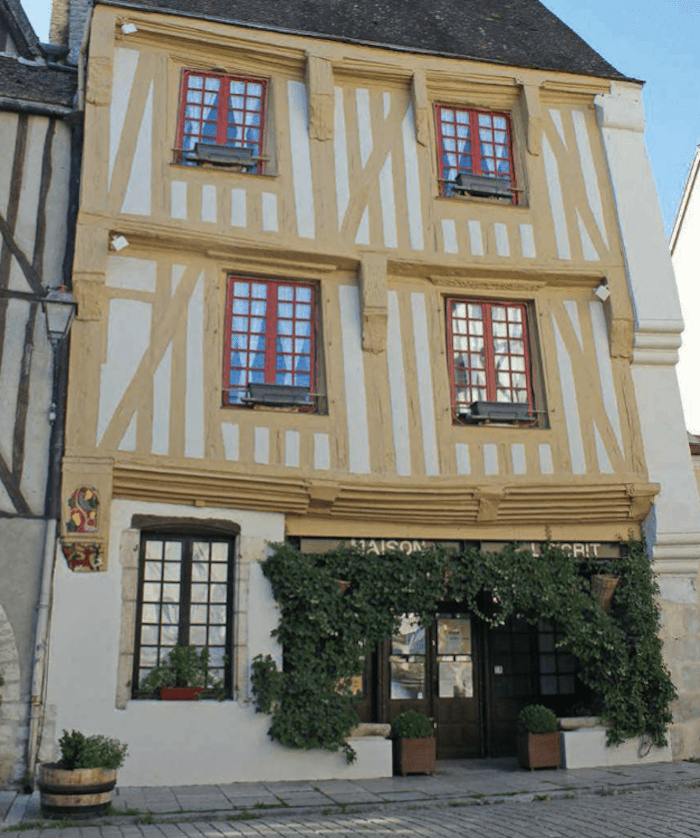 Dating from the 12th century, the basilica’s story begins long before that when the original Benedictine monastery acquired the relics of Mary Magdalene. As a result, the site became a hotspot for pilgrims, including crusaders such as Richard the Lionheart, and so a more appropriate setting was required. Today, the basilica is regarded as a masterpiece of Romanesque architecture, famed for its great, light-filled nave. The jewel in its crown, however, is the monumental ‘Grand Tympan’, the decorative arch over the central portal, with its remarkable carvings.

Another highlight of Vézelay, found halfway up the hill, is the recently refurbished Musée Zervos. A celebrated writer about the arts, Zervos also penned two well-known books about Burgundy, if you fancy some background reading. Today, the museum is home to an art collection that includes works by Picasso, Miró and Max Ernst. 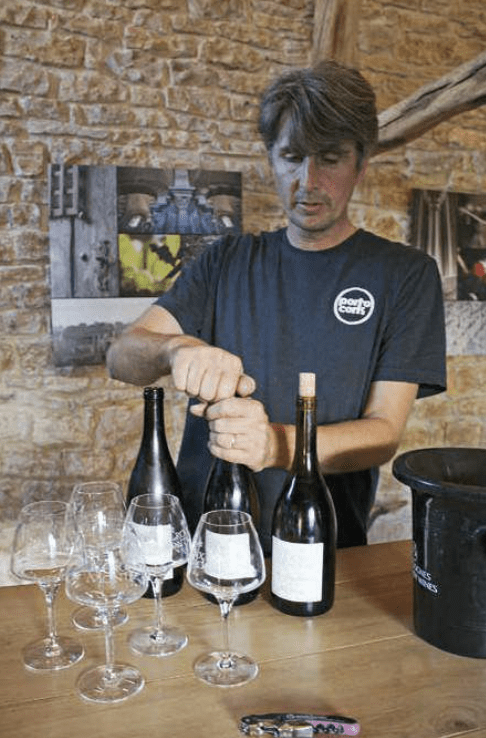 After all that hill-climbing, we’re in need of some refreshment – and where better than the family-run vineyard of Domaine La Croix Montjoie in the village of Tharoiseau? Located in an idyllic setting, with a wonderful view over Vézelay, it’s here that we meet Matthieu and Sophie who introduce us to some of their wines – including a Bourgogne Vézelay, a Pinot Noir Irancy and a Crémant de Bourgogne – all with the coveted AOC designation. We emerge with bottles under our arms, and a glow in our hearts, as the sun begins its descent over the vines.

It also makes an ideal apéro before a magical evening at the five-star Château de Vault-de-Lugny. Dating back to the 13th century, this magnificent estate has been owned by the same family for generations. That night, we dine like royals in the Michelin-starred restaurant before retiring to our rooms with their marble fireplaces, fine paintings and four-poster beds. Should you feel the need to work off some of your supper, there’s also a beautiful underground swimming complex, of which we take full advantage. 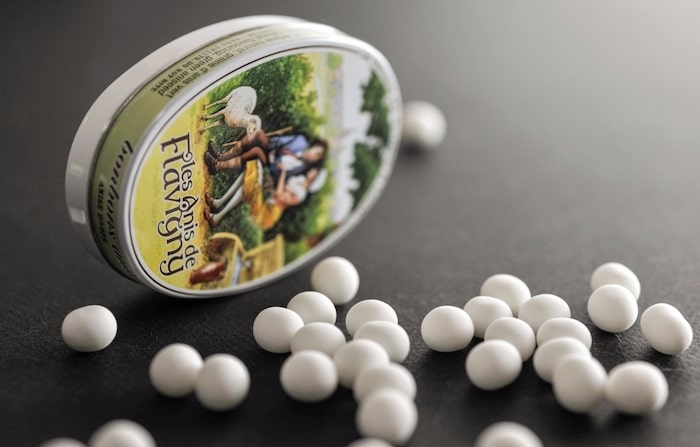 Just as well, in fact, as the next morning sees us in the medieval village of Flavigny-sur-Ozerain, also on the ‘plus beaux’ list, but equally renowned for its sweet tooth. Not only was the movie Chocolat filmed here, starring Johnny Depp and Juliette Binoche, but it is home to France’s oldest sweet factory, Anis de Flavigny, founded in 1591. During our visit, we watch these little aniseed delights being made in a set-up to rival Willy Wonka’s – and where, like Charlie and co, you can enjoy a guided tour.

Another must-see ‘beautiful village’, and one that will transport you straight back to the Middle Ages, is Noyers-sur-Serein. It’s worth taking the time to linger in the lanes, enjoying the half-timbered houses and many craftsmen’s shops. On a further point of interest for movie buffs, part of the classic French comedy, La Grande Vadrouille, was also shot here. 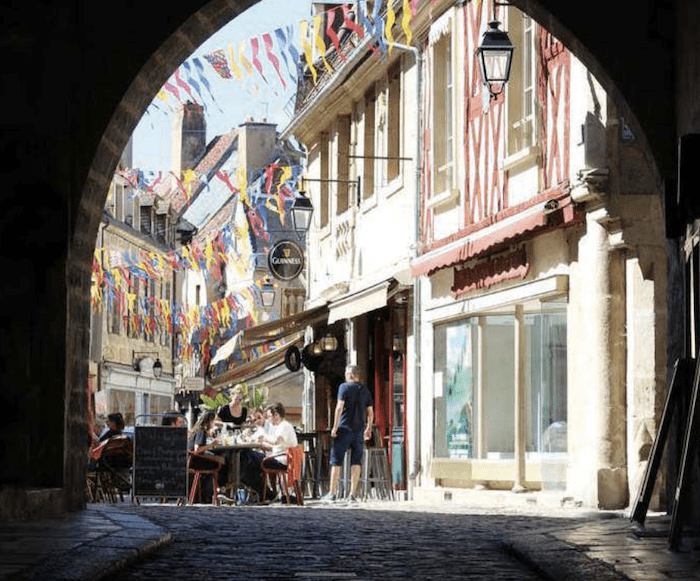 Lunch is at La Fontaignotte, a 17th-century manor lovingly restored into a charming guesthouse and restaurant, in Semur-en-Auxois. Here, we find another connection to the French film world – at the helm are former cinema producer Charles Gassot and partner, Fabienne, now trailblazers for the region’s tourism. In their latest project, they are helping to put Burgundy’s lesser-known gems on the map with a new heritage trail, marked by sculptures of itinerant entertainers, ‘Les Saltimbanques’, and supported by a special app.

Certainly, a must on any visitor’s itinerary should be the nearby town of Saulieu – the ‘capital’ of the Morvan Regional Park – where you will find forests, lakes and nature spanning 285,000 hectares. As well as being a centre for gastronomy, the town is also renowned for its beautiful basilica, Saint-Andoche, which has just celebrated its 900th anniversary. Recently renovated, this jewel of Romanesque architecture is famed for its sculpted columns with illustrations from the Old and New Testaments comprising magical flora and fauna. 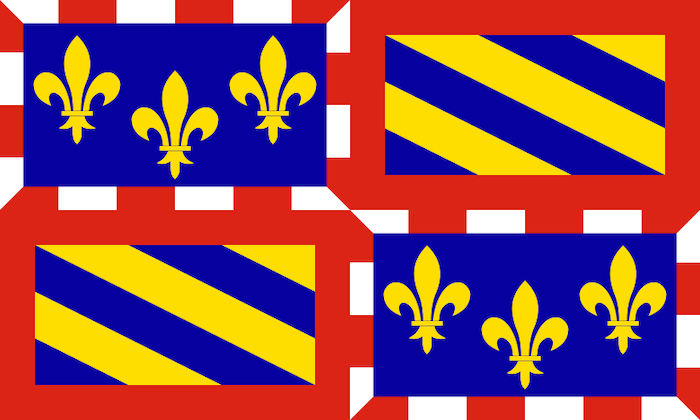 In addition, Saulieu is the birthplace of the sculptor Pompon, once an assistant to Rodin, who became famous for his enchanting animal sculptures. Today, a lovely little museum pays tribute to his legacy.

We complete our tour of the town with a visit to the award-winning spa, Loiseau des Sens, before strolling across the street to spend the night at the Hostellerie de la Tour d’Auxois. A converted 13th-century convent, the hotel is also home to a popular restaurant.

For the final day of our adventures, we embark upon a journey even further back in time – amid the impressive Gallo-Roman remains of Autun. First up, we explore the atmospheric ruin of the Temple of Janus which, thanks to aerial archaeology, we now know was the epicentre of several important buildings. Elsewhere, you can also visit the Roman amphitheatre, two surviving city gates and a mysterious stone pyramid.

Also, be sure to see the imposing cathedral of Saint-Lazare – another fine example of Romanesque architecture – and celebrating its 900th anniversary this year. Again, look out for the magnificent tympanum, depicting the Last Judgement in extraordinary detail, and signed by Gislebertus – who also created the beautifully-decorated capitals inside.

We finish our trip with a picnic overlooking the Roman amphitheatre – once one of the largest in the western empire with a 17,000-seat capacity. Just one more surprise among the many awaiting you in Burgundy. 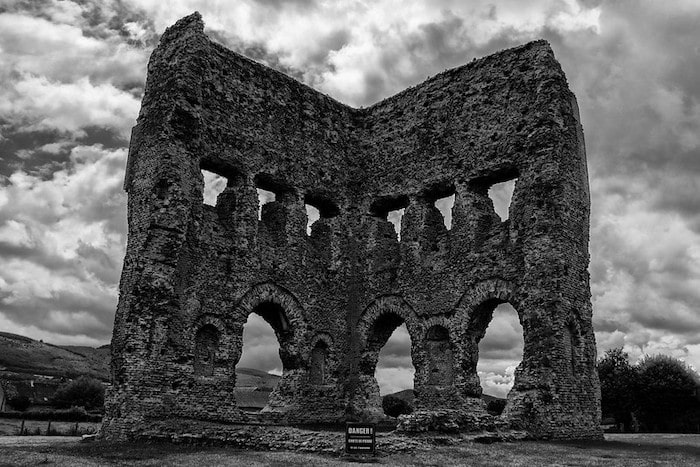 Atmospheric ruins of the Temple of Janus at Autun. Photo © Eric Huybrechts, Flickr