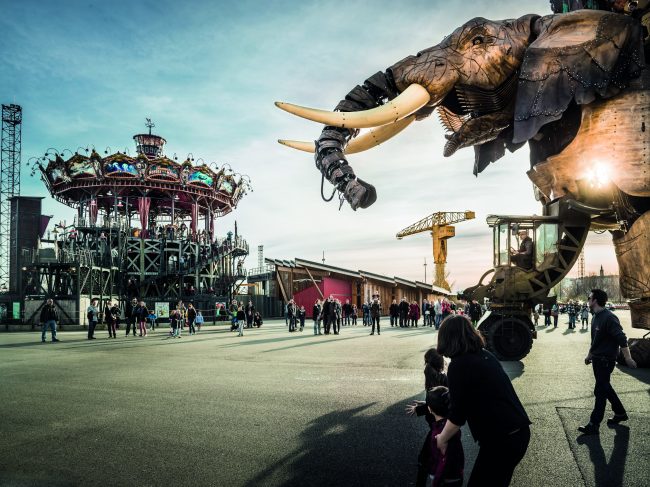 Past and future collide in Nantes, creating a glorious mix of modern art, steampunk fantasy and industrial heritage that has seen its rebirth as one of France’s coolest destinations, says Stephen Davy-Osborne

Quitting law and focusing on his writing was perhaps the best decision Jules Verne ever made – and the boldness of that step has become the hymn of the city he grew up in.

Nantes is not a place that does things by halves. Here the past unashamedly collides with the future and somewhere else in between; and, like Verne’s novels, it can take you on adventures beyond your wildest dreams. That’s perhaps a bold statement for an industrial city on the Loire that grew in prosperity due to the seafaring vessels being riveted in its vast shipyards.

While the slipways have long since fallen silent, the city has not allowed itself to fall into rack and ruin, but has reinvented itself beyond anything imaginable. It has become a destination for art lovers from all walks of life and, with the sheer variety of pieces on display in various guises, visitors are bound to leave feeling inspired – and almost certainly impressed. 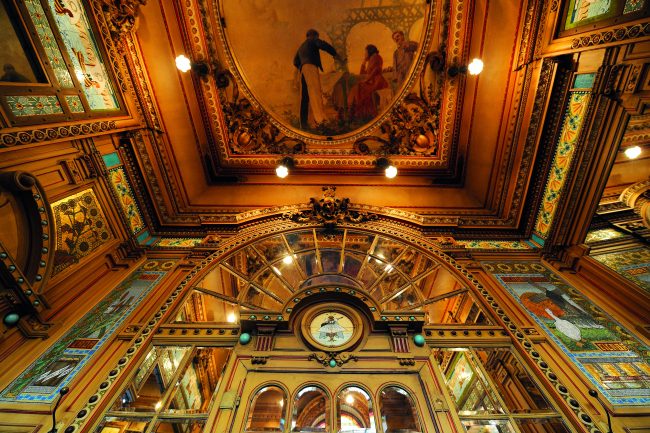 The summer months are when Nantes truly comes alive, with the annual return of Le Voyage à Nantes – when it becomes a canvas for countless artists who transform it into a veritable spectacle.

A seemingly inconspicuous green line on the streets of the city guides thousands of art lovers on a winding 12-kilometre trail, leading from one awe-inspiring kinetic installation or gravity-defying sculpture to another just around the corner.

Running until the end of August, the trail includes a number of remarkable artworks at key points in the city’s open spaces and parks, showcasing some of Nantes’s striking architectural heritage along the way too. 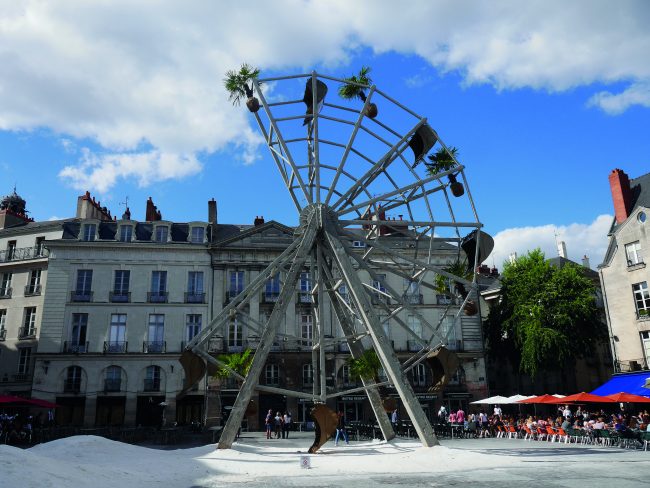 You can’t turn a corner in Nantes without coming face to face with a modern art installation. Photo: Marion Sauvebois

STATE OF THE ART

That’s not to say that this is a fair-weather city, only to be sampled during the summer months. Far from it. Last year, the Musée d’Arts de Nantes stole the headlines when it opened its newly-renovated doors after six years of painstaking work to create a museum worthy of its vast collection.

Here, old meets new with the striking 19th-century façade of the Palais contrasting with the freshly-built Cube, a 2,000m2 building dedicated to contemporary art. 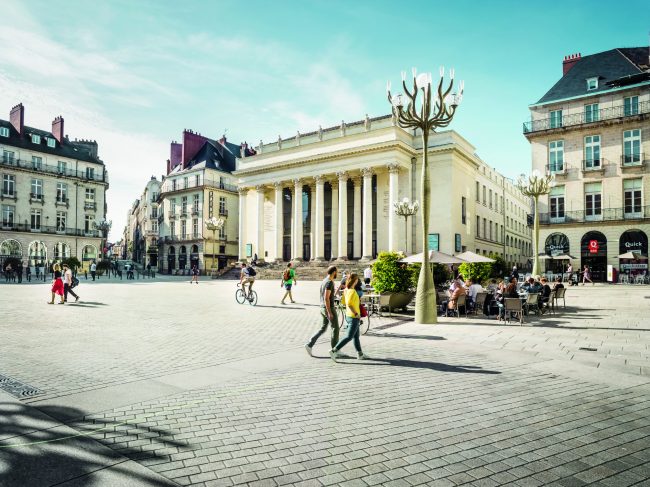 Alongside masterpieces by the likes of Kandinsky and Monet is an impressive assortment of post-1900 works, making up around half of the entire collection, and setting the scene for a truly astounding museum for the 21st century.

The ambitious renovation project, which began in 2011 and saw the museum closed throughout the works, has created an exhibition space around 30 per cent larger for the 900 masterpieces currently on display. The Musée’s vast hoard is thought to number more than 12,000 pieces, making it the largest in Western France and home to one of the most beautiful collections of contemporary art.

As well as Le Voyage à Nantes, the city’s artistic credentials spill out into the landscape with a permanent trail of breathtaking sculptures that line the banks of the Loire as it winds its way to the Atlantic at Saint-Nazaire. 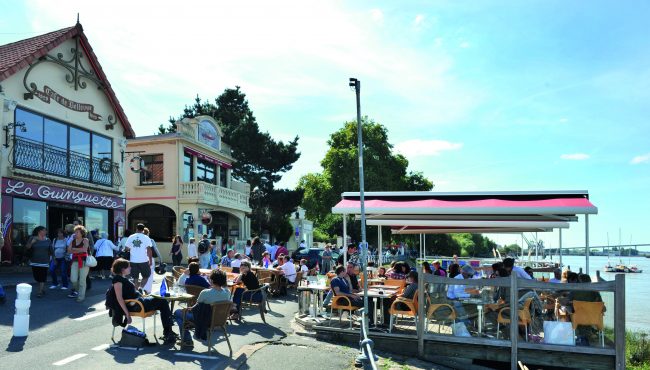 The Estuaire modern art trail is a 60-kilometre route running from the city along the river and includes some exceptional pieces of sculpture. Expect to come face to face with a giant tape measure, a melting sailing ship and the vast Serpent d’Océan along the way, with remarkable installations created by the likes of artists Daniel Buren and Patrick Bouchain, Tatzu Nishi, François Morellet and Felice Varini.

Each piece has been carefully installed to highlight a particular point along the estuary – an expanse that’s home to peaceful nature reserves and bustling industrial buildings and can be enjoyed by foot, bike, car or, during the summer months, by boat. 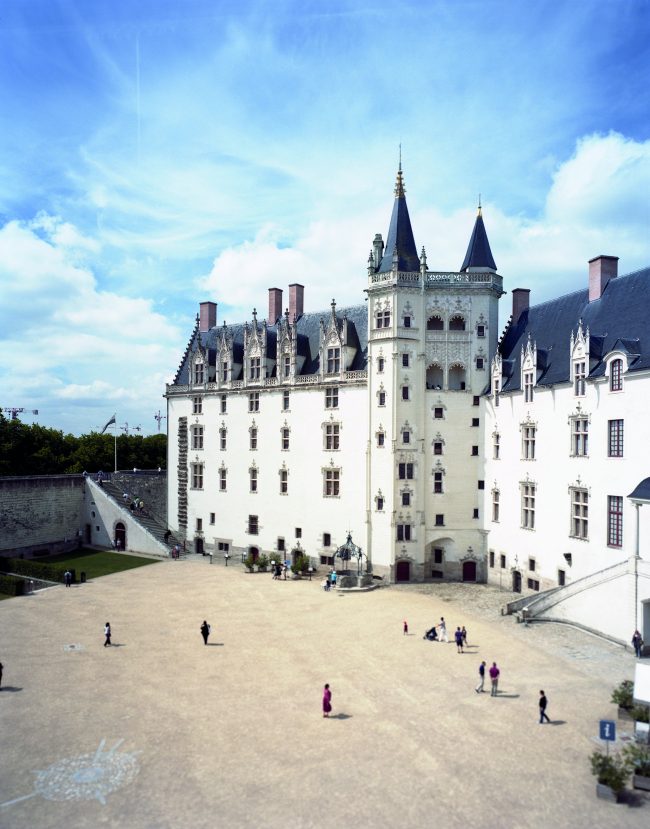 Then, there is the real star of the city, Les Machines de l’île’s Grand Éléphant, which no A to Z to Nantes would be complete without mentioning. This showstopping animatronic pachyderm is guaranteed to make jaws drop – the sheer level of detail making it look almost real. The 12-metre-high, 48.4 tonne mechanical marvel commands as many passengers today eager to ride atop it as when it took its first automated strides along the banks of the Loire back in 2007; when Les Machines de l’île took on the dilapidated warehouses that had once been at the heart of industry.

Today, the island thrives once again, but the elephant is only the tip of the iceberg. A veritable menagerie of mechanical birds and insects (including a giant spider!) can be found in the Galerie des Machines dreamt up by François Delarozière and Pierre Orefice. And one attraction that would most certainly have received approval from Verne himself even allows you to take a voyage under the sea aboard the 80-feet-high Carrousel des Mondes Marins. 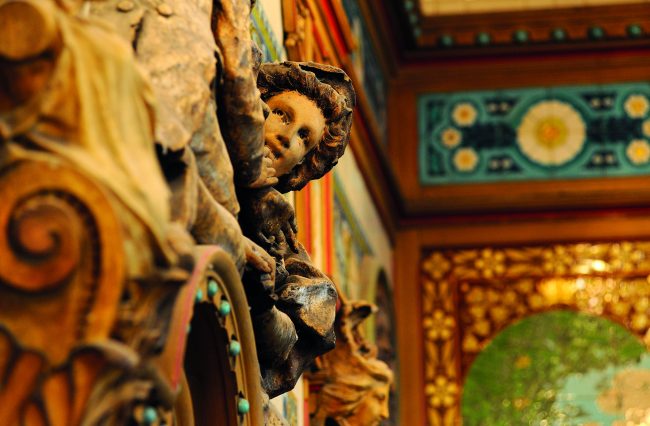 A detail from the decorative interiors at La Cigale. Photo: Patrick Messina/LVAN

Plans are now afoot to take this blend of mechanics and art to new heights with the unveiling of the ambitious Heron Tree project. This 105-feet-tall tree will be made up of 22 wood and steel branches – home to all sorts of magnificent creatures – and is expected to be completed by 2021.

It is this fusion between its industrial and creative heritage that has seen Nantes reinvent itself to become something really rather special, as it writes each new chapter in its story in a way that Verne could only have dreamt of. 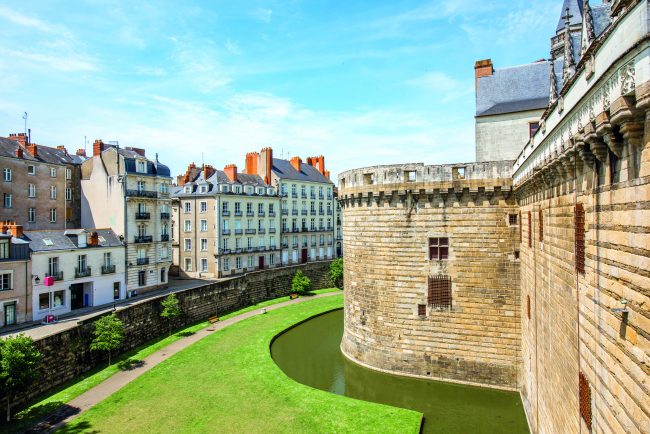 Among Nantes’s most striking spectacles – and somewhere that really embodies the idea of past meets present – is the Château des Ducs de Bretagne. This elegant palace is built behind robust fortress walls and brims with multimedia facilities that bring the story of the château to life for visitors.

If you’re looking for something a little more laid-back, take a short boat ride along the Loire to Trentemoult. Here, the colourful, narrow streets of the former sailors’ village that once inspired Verne’s Captain Nemo have captured the hearts of a new generation. Look out for La Civelle, which offers a menu of pan-fried lobster, scallops, tiger prawns and fillet of lamb, as well as an impressive wine list. With the option to dine al fresco, there is no better place to enjoy a relaxing afternoon in the sun.

If cocktails are your thing, take the elevator to the 32nd floor of the Tour Bretagne, where you will be greeted by a vast white bird – half heron, half stork – whose long neck snaked around the top floor helpfully doubles up as a bar. Don’t forget to drink in the unrivalled views of the city and beyond from the outdoor balcony. 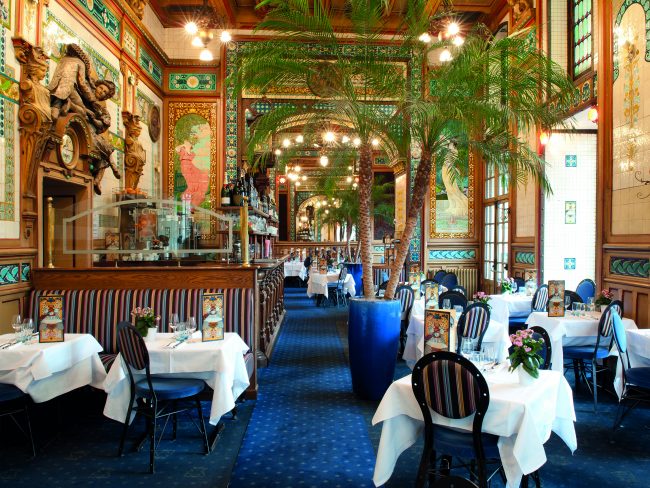 La Cigale is one of those restaurants that will make you catch your breath the moment you walk through the doors. Classified as a historic monument in the 1960s, the beautifully tiled walls and intricately decorated ceilings almost distract from the delicious meals cooked up by the hugely talented chefs who make this a must-dine destination. Booking ahead is essential. www.lacigale.com

Even if you’re not a fan of retail therapy, a visit to the 19th-century ‘shopping mall’ Passage Pommeraye is a must. Linking two streets on vastly different gradients, this glass-roofed building dating from 1840 is home to an eclectic mix of boutiques, as well as Renaissance-style sculptures. There’s enough to keep you fascinated if shopping really isn’t your bag. 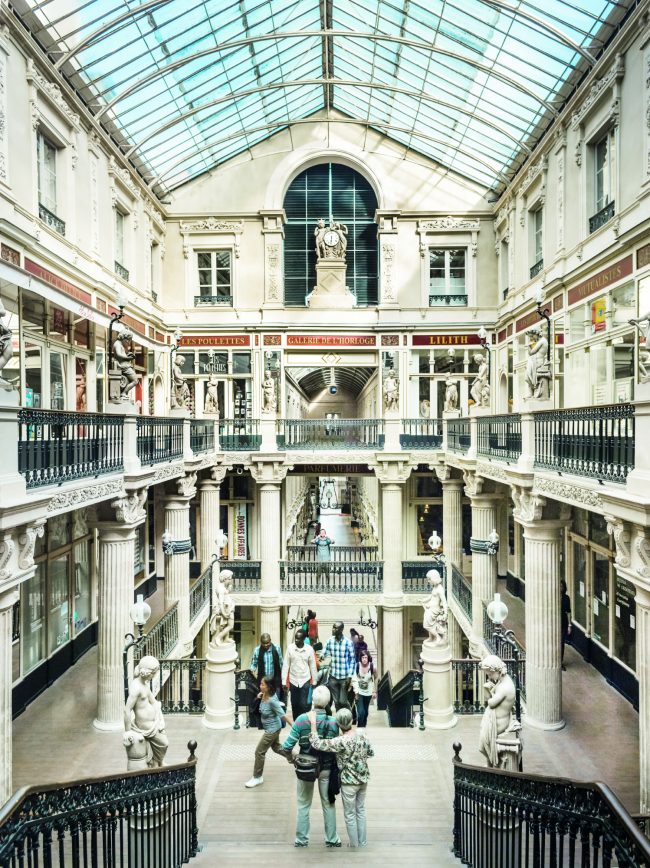 Get your fix of shopping and history at Passage Pommeraye. © Franck Tomps / LVAN

Stepping onto the gangplank that leads through the doors of the boutique Hôtel La Pérouse in central Nantes is like boarding a luxury vessel setting sail across the Atlantic. This avant-garde hotel was conceived by city architects Bernard and Clotilde Barto, and features rough-cut wooden designer furniture made at the shipbuilding yards of Chantiers de l’Atlantique in Saint-Nazaire, with each of the 46 cabins inspired by 1930s seafaring style. www.hotel-laperouse.fr

BY AIR: Easyjet flies daily direct from Gatwick to Nantes, as well as operating flights from Bristol to Nantes. www.easyjet.com

BY CAR: Nantes is within striking distance of the northern ferry ports – 110 miles from Saint-Malo, 190 miles from Roscoff and 180 miles from Caen.

For more details about the city, visit www.nantes-tourisme.com