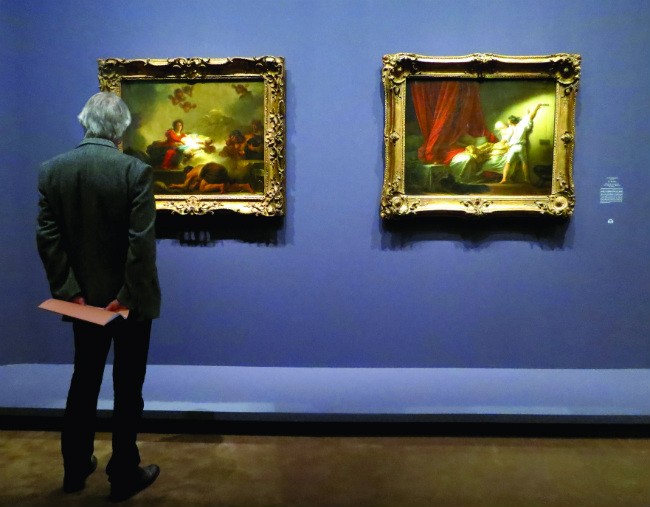 When I first thought of Fragonard, what first came to mind were beautiful scenes of fêtes galantes in idealised, pastoral settings. Well, not anymore, as this exhibition at the Musée du Luxembourg revealed the Grasse-born artist’s more risqué, frisson-filled side.

The 18th century, particularly the final years before the Revolution, was a time of sleazy intrigue and sordid escapades, during which the erotic novel reached its apogee. ‘Frago’, as he referred to himself, became that hormonally-charged period’s main illustrator and this exhibition focuses on his cheekiest, most amorous works, which are now considered among his greatest. Helpfully, the exhibition’s curators have provided a framework to place these compositions in the context of their era – one when love, as a bond of affection, was kept distinct from the pursuit of the pleasures of the flesh. Needless to say, it must have made the task of research most entertaining. Fragonard’s rendering of pale, exposed skin, blushing cheeks, unravelling ribbons and bodies in motion are nothing short of masterful.

Fragonard’s career was quite interesting in that it didn’t follow a predictable path. When he earned recognition at the Paris Salon in 1765, which brought the prized academy membership that most artists avidly sought, he eschewed a certain future in ‘historic’ painting and took private commissions instead. Predictably, Frago’s patrons favoured libertine themes and the artist’s skill, humour and benevolent eye towards the many human frailties saw him become exceedingly successful.

This exhibition features over 80 celebrated works, which provide a unique, in-depth look at the sensual themes in Fragonard’s oeuvre. They include illustrations for La Fontaine’s stories and artistic counterpoints by such contemporaries as Boucher, Baudouin and Greuze, before climaxing with his later work, where Frago revisited the fêtes galantes of his predecessor, Watteau, with a return to more sedate, connubial settings.

TIP: Some of the works on show may not be suitable for a younger audience.

Previous Article Carmen/ Suite Flamenca at the Casino de Paris
Next Article Travel to Amiens: Follow in the Footsteps of Author Jules Verne