Travel to Amiens: Follow in the Footsteps of Author Jules Verne 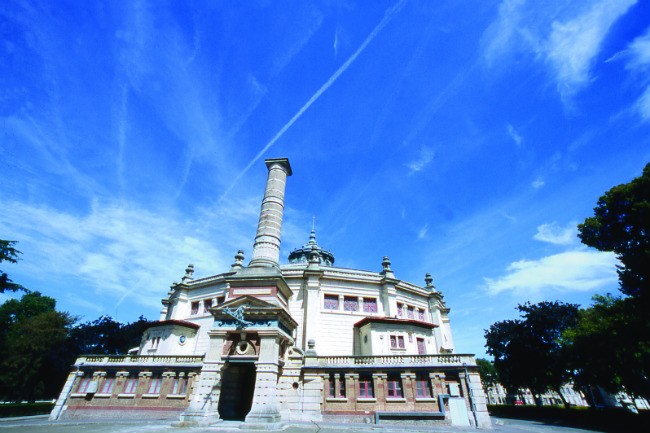 Like most visitors, I first came to Amiens for its Cathedral. On a later visit, while touring the Somme’s memorial sites, I was surprised to hit upon Jules Verne, whom I’d always associated with his native Nantes – and with the capital, where he settled in 1848, aged 20, and became “completely Parisian instinctively”.

Yet in 1871 he was willing “to follow my wife’s desires and settle in Amiens”, as he wrote to his friend Charles Wallut. She was an Amiens woman, Honorine, aged 26 and a widow with two young children when they met in 1856. They married the following year and lived in Paris until 1869.

Verne liked Amiens, a “levelheaded, polite, even-tempered town” with a “cordial and enlightened society”. It was also “close enough to Paris to benefit from its reflection without the insufferable noise and sterile agitation”. Moreoever, it was near his beloved Le Crotoy in the Baie de Somme, where he kept a boat named after his son, Le Saint-Michel, and rented a villa, ‘La Solitude’.

From 1869 to 1871 the couple lived there and it proved an inspirational period, one which saw the birth of his best-selling novel, Twenty Thousand Leagues Under the Sea, much of which he’d written on his boat. “Oh! My dear friend,” he reported to his publisher, Pierre-Jules Hetzel. “What a book if I’ve succeeded! What great things have I found at sea whilst navigating on the Saint-Michel!” But it was at 1867’s Exposition Universelle in Paris that he discovered and was amazed by a submarine, and it was George Sand who actually urged him to write the novel.

The villa still stands, looking out to the water, and so does the house he owned in Amiens, at 44 boulevard de Longueville (now the Boulevard Jules Verne). Craving more space, in 1882 the Vernes rented a three-storey townhouse featuring a tower, ‘La Maison à la Tour’, which is now the Maison de Jules Verne museum. It was there, in 1889, that the Vernes were visited by the American adventuress Nellie Bly, during her journey around the world – she was the first to turn Verne’s fiction into reality. Somewhat delayed by this detour from London, she nonetheless completed the journey in 72 days, thus beating the author’s Phileas Fogg by eight days! “Jules Verne’s bright eyes beamed on me with interest and kindness,” she recorded, “and Mme Verne greeted me with the cordiality of a cherished friend.” By 1900, Verne was an ailing old man and the couple moved to a smaller house, where he died in 1905, and Honorine in 1910.

Little has survived of La Maison à la Tour’s original interior, but Nellie Bly’s description of the grand salon, which is framed on the wall there, alongside period photos, helps to visualise the house as it was. However, you’d be hard pressed to picture Pierre-Jules Hetzel’s section of the house as the Verne family’s bedrooms. Hetzel’s salon is the one room that’s perfectly preserved, yet it was moved from Paris in its entirety, complete with the couch where the likes of Alexandre Dumas, Victor Hugo and George Sand once sat.

More than a publisher, Hetzel was Verne’s inseparable team-mate, whom he bitterly mourned when he died, in 1886. Verne continued with Hetzel’s son, Louis-Jules, but it was never quite the same. Viewing the red bindings of Hetzel’s old editions brought back the thrill of childhood, when I travelled to the Moon with Verne’s hero Michel Ardan, whose surname is an anagram of photographer, cartoonist, journalist and balloonist Félix Nadar’s.

Up a spiral staircase, Verne’s study has been recreated – the smallest and most intimate room, it’s where his presence is most felt, and it’s nice that the globe on the desk is the author’s. He wrote over 30 novels there, working daily from 5am to 11am. His library contained some 12,000 books, including classics by Homer, Montaigne and Shakespeare, and the popular authors of the time, Dickens, Walter Scott, Fenimore Cooper and Poe. The latter was a big favourite, and in his youth Verne loved Defoe’s Robinson Crusoe.

The museum is filled with touches evocative of Verne’s Voyages Extraordinaires – the sphere atop the tower; the interior of his last boat, Le Saint-Michel III; and the reproduction of the journey from Robur the Conqueror on the floor. The attic holds much Verne memorabilia, such as old photos, cinema posters, board games, magic lanterns and puppet theatres, while models of the extraordinary flying machines that he invented – the Albatross, the Go Ahead and the Épouvante – hang from the ceiling.

There’s more to the museum than mere window dressing. I learnt so much from the wealth of documents, not least about Verne’s involvement in the public life of Amiens, which incited me to explore the town in his footsteps – a guide can be arranged through the Tourist Office. Among other positions, Verne was appointed Director of Amiens’s Académie des Sciences, Belles-Lettres et Arts. The speech he delivered on that occasion, Une Ville Idéale, is an imaginary vision of an idealised Amiens in the year 2000. Still in existence, the Academy resides in the East Wing of the Louis-Aragon Municipal Library, adjoining the Musée de Picardie.

Between 1888 and 1904, Verne served Amiens as town councilor and instigated the construction of the Cirque d’Amiens (now the Cirque Jules Verne), which was designed as a multi-purpose venue and emulates Paris’s Cirque d’Hiver. Designed by Emile Ricquier, a student of Eiffel, and inaugurated by Verne in 1889, this avant-garde building boasts a metallic structure, complete with a steam-generated heating system and electricity.

In matters of feminism, however, Verne showed no avant-garde inclination. Addressing the pupils of the Lycée des Jeunes Filles (now the Lycée Madeleine-Michelis), he proclaimed that the primary concern for girls studying chemistry was “to learn and retain which molecules are necessary for the preparation of a pot au feu or a haricot au mouton.”

Verne rests in the serene Cimetière de la Madeleine, beneath Albert Roze’s sculpture of him, which is titled “Towards immortality and eternal youth”.