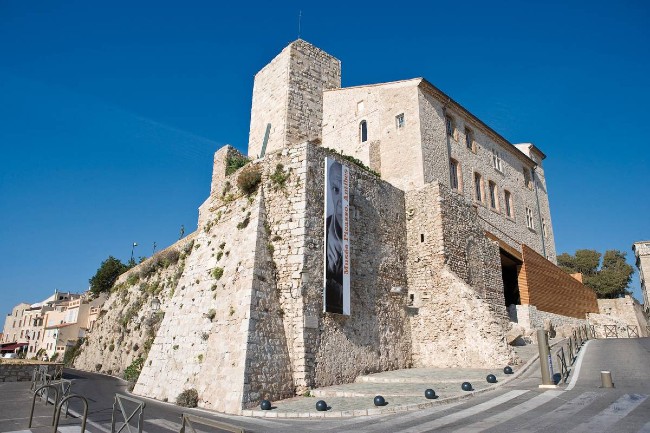 Just a week ago, during my first permitted trip to my beloved France in more than two years, I arrived in Antibes, moved into a small apartment in the very oldest part of the town, and wandered a few steps out to the town’s stone wall to walk along the sea. In less than five minutes, I reached the back of the ancient stone structure housing the Picasso Museum – towering above me and, as always, beckoning me to enter.

I expected the usual – a wonderful meander through every aspect of Picasso’s works of 1940s and later – paintings, sculptures, one drawing permanently worked onto a blank wall; ceramics; photos by Michael Sima of the artist and Françoise Gilot when they lived and worked on the top floor in 1946; and perhaps a temporary exhibit held on the first or second floor.

But what I discovered on the second floor this time was what its catalogue correctly calls a “unique experience”. I had not noticed the sign outside under a tree: “The Nahmad Collection – said to be “one of the most important private Picasso collections in the world” – has donated to the museum for just five short months nine famous Picasso paintings (dating from 1905-1971), along with a 1954 Rothko canvas which hangs opposite “The Convert” by Nicolas de Stael (1955).

Each room has only one or two works. And such exciting and unusual works! They are displayed to create not “accumulation” but “focus” – so that the works are not linked by theme or subject or even time, but are each to be received “in its singularity for the sake of contemplation and interpretation.”  Just a few examples:

“Le Baiser” (1969) is one of the 15 paintings of a kiss made between October and December of 1969, exhibited at the Palais des Papes in Avignon in 1970. This version was painted on October 24, 1970 – the eve of Picasso’s 88th birthday and is said to be “an ultimate reminiscence of life’s carnal pleasures.” 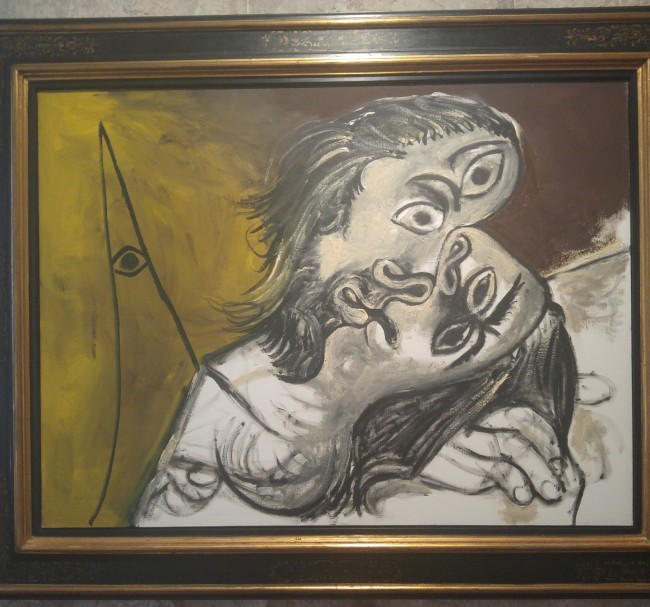 Yes, indeed it is. The review of that 1970 exhibit said that “The kisses advance, swell, spread, and expand in the largest rooms of the Palais des Papes.” Just this one on the wall in Antibes was for me an intense experience. I couldn’t take my eyes away from the ardent and fierce expressions in the lovers’ eyes and the swollen promise of their lips. The female is splayed under the man with her head bent back resting on his downturned hand (no – he doesn’t hold or embrace her with that hand, though he appears to do so with the much smaller scale second hand) – all done in shades of white, grey and black.

The catalogue description: “The tones of the canvas range from the most intense light to the deepest black, as an evocation of death – a feeling reinforced by the presence of the spectral form that spies on the couple in full embrace.”

Indeed, there is a one eyed triangular shape in the swirling dark of the atmosphere around them. I hadn’t really noticed until I read that description, so entranced was I in the two embracing figures. 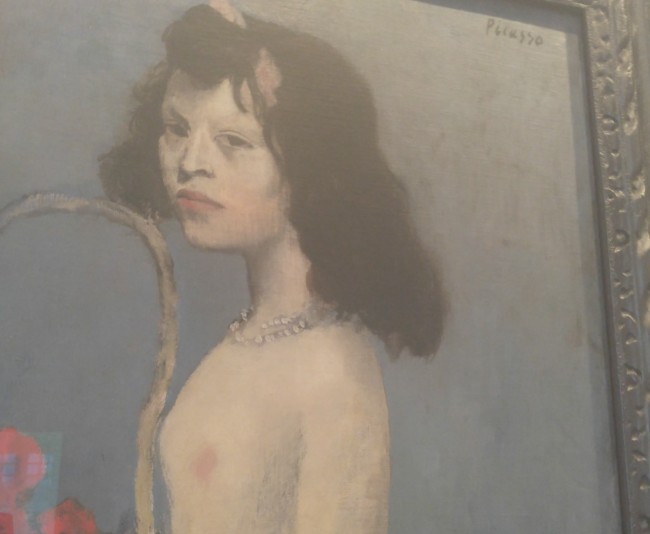 Another example – the 1905 painting “Fillette à la corbeille fleurie.” A slim young female body with practically no breasts stands in silhouette with her long dark hair surrounding a face appearing to be both sullen and middle aged. She holds a yellow basket filled with bright red flowers. Other than the blue shaded wall and golden shaded floor, that is the entire painting. She appears to be staring at me and, despite her nudity, very much in charge of the room. I am a little afraid of her.
This painting, one of the only full length nudes in Picasso’s oeuvre, is said to represent a transition between his rose and blue periods. The model is said to be a flower seller on the Place de Tertre who sold both her flowers and body outside of the Moulin Rouge and also posed for van Dongen and Modigliani.

Interesting that Leo and Gertrude Stein purchased this painting from a dealer who offered to take a guillotine to the girl’s legs – they were so hated by Stein – and this purchase along with others made at that time pulled Picasso out of poverty. Picasso himself apparently thought much of this painting since in 1932, during his “first major retrospective at Georges Petit’s Galleries,” hung it in a place of importance between two of his surrealist works.

A third example: the 1932 “Femme couchée à la mèche blonde.” This is said to be the last of Picasso’s 1932 paintings, and also the last done in that year’s series of his then mistress, Marie-Therese, one of several “monumental intimate works” kept by Picasso until the end of his life and also one of the series where he “pushed his own limits to a climax with jagged touches of texture as if applied with a knife,” with “colours mixed on the very surface of the canvas without respecting the lines of the figure, the way an American abstract expressionist such as Willem de Kooning would 20 years later.”

With just a few lines and those unrestrained splashes of colour, the woman appears languorous, comfortably dozing, but open and sensuous as if waiting to be touched.
Other works in this unusual exhibit are:

“Les Femmes d’Alger (version H)”, January 24, 1955, part of a group of paintings done in Paris after the nationalist insurrection in Algeria. The theme, though, was taken from an 1834 Delacroix painting – an artist that fascinated Picasso – first appeared in his 1940 sketchbook pages. This one is also influenced by Matisse. 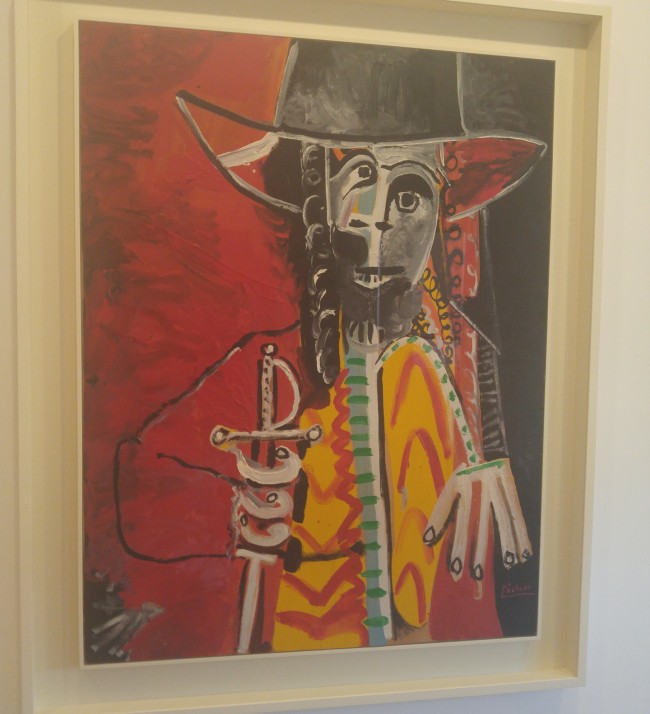 “Le Déjeuner sur l”herbe”, February 27, 1960. Picasso, as he neared 80 years of age, measuring himself against “old masters”, painted often Manet’s theme of “Luncheon on the Grass” – this one being the first of a series of 26 paintings, almost 200 drawings and pastels.

“Le Peintre et son modèle,” March 28, 1963, said to be the first of the 280 paintings he did on this theme where he clearly showed he had been “won over” by the theme.

“Homme a l’épée”, July 25, 1969, an example of Picasso’s use of expressionist technique towards the end of his life to paint 16th-17th century musketeers, but always Spanish so as to be closer to his heritage.

“Homme Assis a l’épée et a la Fleur”, September 27, 1969, a tongue-in-cheek take on his then proclivity, fighting his advanced aging, to paint himself as a virile musketeer- this one influenced by Diego Velasquez. 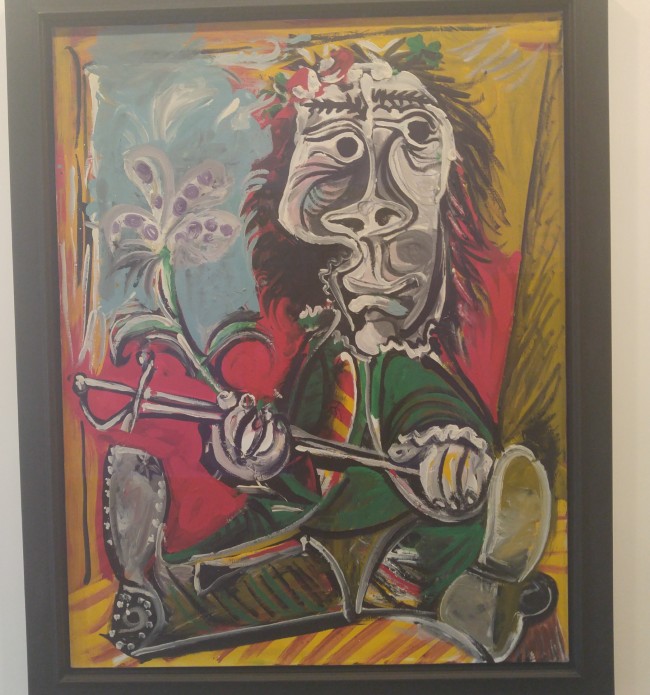 “Femme au Chapeau”, August 16, 1977, said to depict his last love, Jacqueline Roque, and to evidence his new way of painting – “expressing a violent form of eroticism in keeping with the times, and with the artists desire for eternal renewal.”

The Picasso Museum is a Roman fort (the Chateau Grimaldi), rebuilt in the 14th century, purchased by France and used by military engineers until it was abandoned in 1924, then purchased by Antibes later to be converted into an art museum. (At the time Picasso was spending much time in that part of France, looking for an expanse of walls on which to paint, but he was denied by the public authorities, and even explored purchasing the rebuilt fort for himself – but Antibes bought it first.)

Its first curator, Romuald Dor de la Souchère, through a connection with Picasso’s good friend Michel Smajewski (who went by the pseudonym Michel Sima), was visiting de la Souchère and facilitated the meeting where they cut a deal with Picasso in 1945 – he could use an entire floor of the museum and its clean white walls as an atelier in exchange for a donation of some of the works to the museum.

Picasso moved in with Françoise Gilot in 1946, with easels, tables, mattresses, paint and brushes, a key that he tied to his belt, and two enormous projectors that he used for light at night, working for a few months and then coming back years later to do more work and make more donations – until so many rooms were allocated to Picasso works that in December 1966 the Chateau Grimaldi was renamed the Musée Picasso. 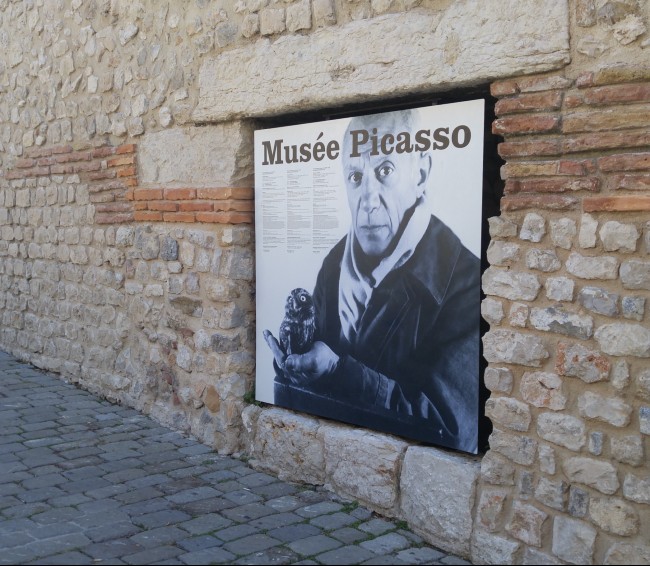 From the top floor, you can see the red tile roofs of the old city through one window and the Mediterranean sea from the other, and if you stand behind the museum on its back terrace, you can enjoy a sculpture garden and another rapturous view of the sea.

The Musée Picasso is itself an experience that should not be missed – an opportunity to look into the life and eyes of Pablo Picasso through the photography of Sima, see his works on the white walls of the Chateau that had drawn him there, and also look out the windows of his atelier to see the city and the sea as he must have – not until then did I find myself holding my breath and clasping my hands in such enjoyment.

But now – I have almost too late discovered by chance that there is yet another opportunity to enjoy and understand this incredible artist – but unfortunately only for a short time. Note: This entire exhibit can be seen in an hour. Take another two hours for the rest of the museum – though you can always return.

Musée Picasso, place Mariejol
06600 Antibes
Tel: +33 (0)4 92 90 54 28
Open every day except Mondays. 10 am to 1pm and 2pm to 6pm (ticket office closes at 12:30 and at 5:30pm). Full price ticket 8 euros, reduced price 6 euros, free access for those with reduced mobility. Combined ticket of 10 euros for 7 consecutive days to Antibes municipal museums. All visitors must present a health pass – proof of vaccination or negative COVID text within 72 hours.

Previous Article My Life in Paris: It Had to Be You, Sugar
Next Article Picasso’s Women