The Littoral Charms of Brittany 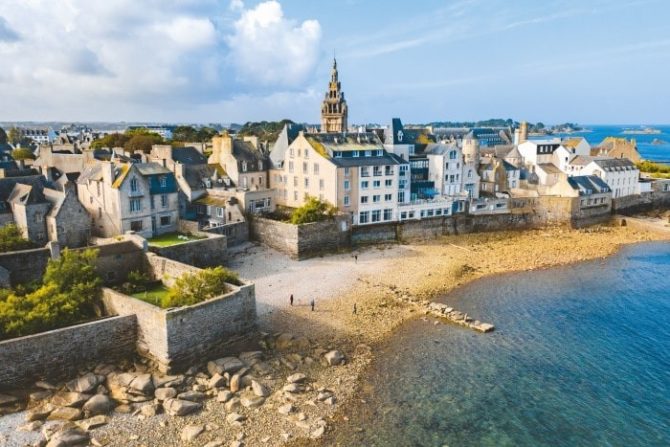 With its dramatic coastline and rural interior, Brittany has long been a favourite with holidaymakers. Gillian Thornton can’t wait to return.

Few sporting events showcase a country in quite the same way as the Tour de France, when competitors battle through 21 gruelling stages for one of cycling’s most coveted trophies. Thrills, spills and passion are played out across three action-packed weeks against some of the most scenic backdrops of any international competition, and this summer, all eyes will be on Brittany as the region becomes the prestigious launch pad for the 108th Tour. Le Grand Départ gets under way in Brest on June 26, the ﬁrst of four Breton stages covering more than 750km that will challenge riders with hazards ranging from coastal winds to long hill climbs. And whilst competitors burn up the calories across Brittany’s four départements, so road racing fans across the world will be immersed in scenery that will make many, like me, yearn to enjoy it ﬁrst-hand. 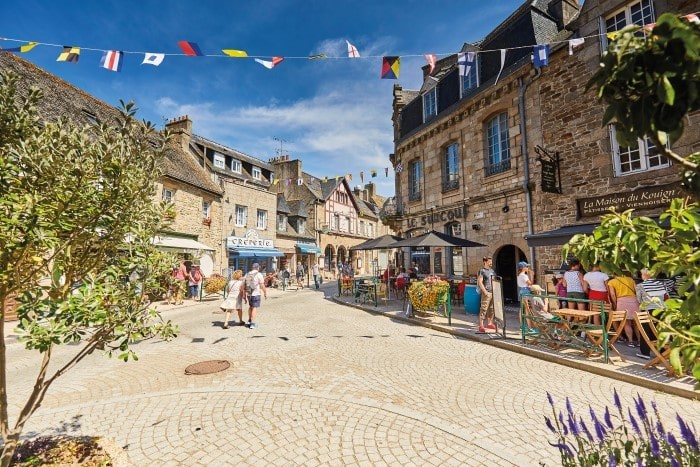 The second day of this year’s tour begins on Brittany’s northern shore in the charming resort of Perros-Guirec in Côtes-d’Armor, a jewel of the glorious Pink Granite Coast. Walk the old Sentier des Douaniers, or Customs’ Path, and around every bend there’s a new picture-postcard view of sandy beaches, rugged coves and colourful harbours, guaranteed to rival any long-haul holiday destination. I’ve spent many happy hours strolling this historic footpath where customs ofﬁcers once kept watch for smugglers. A tranquil trail punctuated with lighthouses, giant pink boulders and strange rock formations, it is now part of the long-distance GR-34 hiking route.

Like many travellers in 2020, my Breton villa holiday fell foul of the Covid-19 travel restrictions. This year, however, Brittany should be back in business. Soon we can breathe in the fresh sea air, socially distance on the region’s sandy beaches, and recharge drained batteries in its quiet countryside. And no matter how many times you have been to Brittany before, there’s always something fresh to discover. It’s easy to have a new adventure here, simply by taking another path, exploring a different location, or trying a new activity. 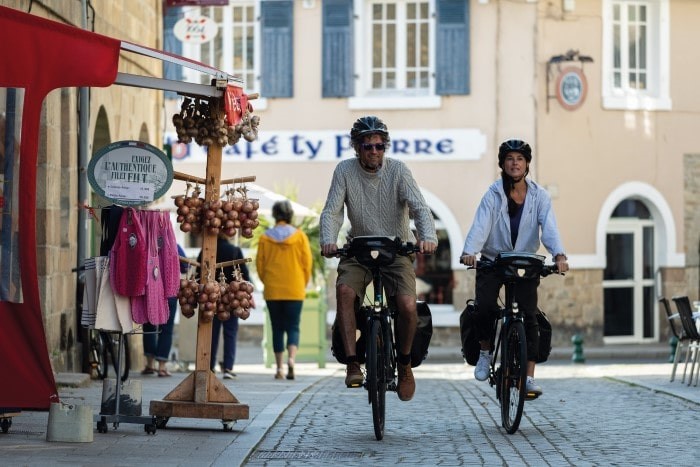 Arrive by ferry and it’s tempting to drive straight to your accommodation, but rush through the ports and you miss a treat. Ancient granite cottages snuggle together in Roscoff, the historical departure point for the famous ‘Onion Johnnies’, once a familiar sight across the UK. And don’t miss the sculpted ships on the outside walls of the 16th-century church. Further east, there’s no more dramatic way to enter a country than by sailing into harbour past the old walled town of Saint-Malo, painstakingly rebuilt after the devastation of World War II. Just a few minutes from the ferry port, you can cross the Rance by road or shuttle ferry to stylish Dinard. Or head upriver to beautiful Dinan with its 14th-century castle, medieval streets, and picturesque river port. Perhaps enjoy a new perspective by hiring a kayak to see the ﬁshing huts and wildlife from water level.

I’ve a soft spot, too, for regional capital Rennes, with its glorious architecture and rich history. This year Rennes is one of ﬁve Breton towns that have injected new life into ancient buildings as arts centres or community hubs. Once a maternity hospital, the Hôtel-Dieu is now an atmospheric venue combining sports, cultural and gourmet activities. Eat local produce round the old cloister, enjoy live music, and sip beer brewed in the former operating theatre. 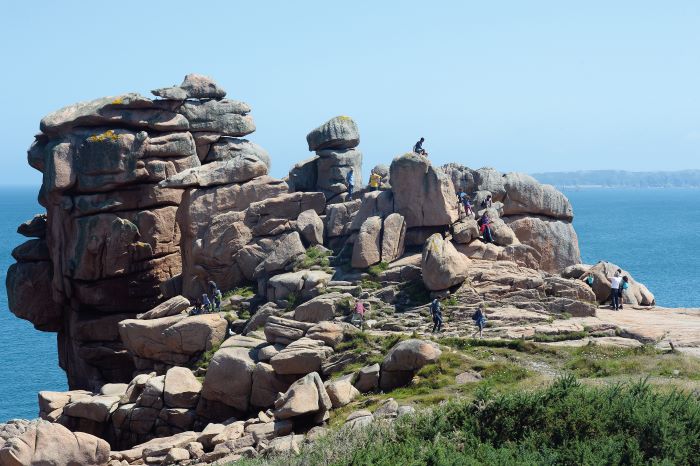 Meanwhile, on the west coast in Brest, a former convent and shipbuilding centre offers food, shopping and the largest climbing wall in the west as the newly-opened Ateliers des Capucins. Perhaps art’s more your thing? Then browse exhibitions of photography, talk to artists in residence, and take part in photo workshops at the GwinZegal art centre in the newly-restored Guingamp Prison; immerse yourself in urban art at DéDaLe inside the former public works department in Vannes; and meet creative artists in Le Garage, close to the indoor markets of Saint-Nazaire. There’s more art in the countryside around Pontivy, where cyclists can follow ﬁve colour-coded routes for the 2021 edition of L’Art dans les Chapelles, where 14 artists have installed innovative creations in 18 chapels from the 15th to 19th century. Also new this summer at Saint-Marcel, near Brocéliande, Le Musée de la Résistance Bretonne tells the stirring story of the local Resistance movement in World War II. 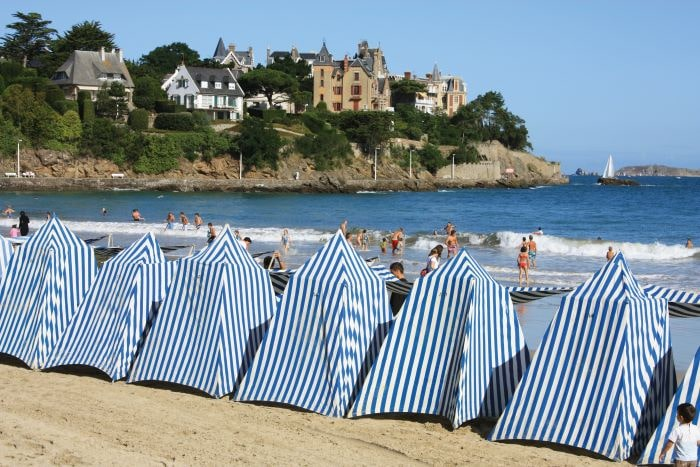 Dinard’s gorgeous beaches make it a popular destination for holidaymakers

Many holidaymakers choose Brittany for its beaches and whatever kind of shoreline you’re after, Brittany delivers, from broad sandy beaches and hidden coves, to rocky headlands and offshore islands. With 2,730km of coastline, including many islands, Brittany boasts more seashore than any French region, so there’s always something new to discover. Ask at any of the many local tourist ofﬁces about activities ranging from paddle boarding and kite-surﬁng to guided nature walks and island excursions.

Most of the coastline belongs to the départements of Côtes-d’Armor in the north, Finistère in the west, and Morbihan in the south. Ille-et-Vilaine in the east has the shortest stretch between Dinard and the Bay of Mont-Saint-Michel, and includes Cancale, famous for its oysters. Head west into Côtes-d’Armor, through Saint-Brieuc with its colourful harbour and timber framed buildings, to the Pink Granite Coast resorts of Paimpol, Perros-Guirec and Ploumanac’h. 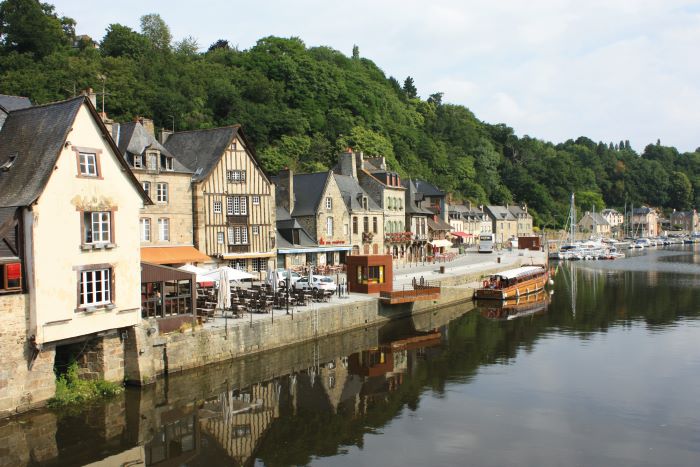 The Rance flows through the town of Dinard. Photo credit: CRTB

Beyond Roscoff, the high cliffs and rocky headlands of Finistère make for spectacular coastal walks as you round the far west of the region to the naval port of Brest. The offshore waters here are rich in ﬁsh too. Tour the authentic boats and tall ships of the Maritime Museum at Douarnenez, once the heart of the thriving sardine industry.

Cornouaille in Brittany’s deep south-west is rich in folklore and is beloved, too, by artists for its clear light, tranquil estuaries and historic towns. Spend a day in Quimper on the Odet river, hailed as Brittany’s cultural capital, and don’t miss Concarneau, with its historic walled centre, and Pont-Aven, once home to Post-Impressionist artist Paul Gauguin.

East of Lorient, the coastline elongates unexpectedly at Carnac to form the narrow Quiberon peninsula. Boats depart here for some of Brittany’s most idyllic islands, whilst the nearby ‘inland sea’ of the Golfe du Morbihan lies between historic Vannes and the ocean, accessible only by a narrow inlet and peppered with numerous tiny islands. 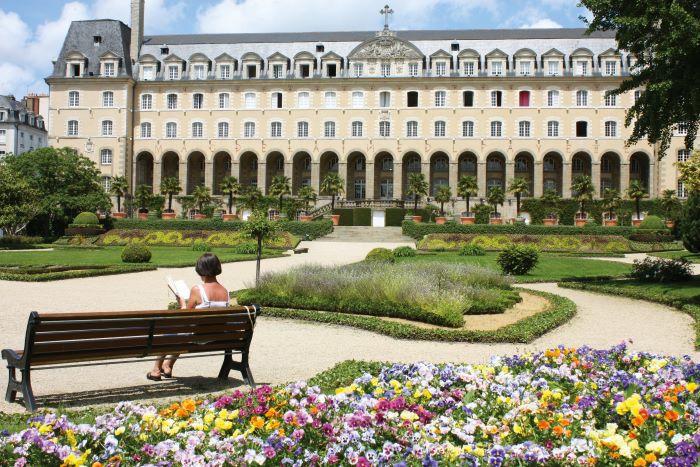 The splendid gardens at the Palais Saint-Georges at Rennes. Photo: Gillian Thornton

Worth a detour is nearby Saint-Goustan, nestled on a bend in the Auray river, a buzzing river port in medieval times, but now a charming harbour fringed with tempting cafés.

The Breton coast is dotted with offshore islands, clearly visible from the mainland. Some are rocky outcrops, home only to colonies of sea birds, and many are protected as nature reserves. Others are large enough to welcome walkers and day visitors, whilst a few are home to both permanent residents and holidaymakers, car-free or at the very least ‘trafﬁc-lite’.

Sail into Roscoff or Saint-Malo to visit the two inhabited islands off the north coast. I fell in love with the tranquil Île-de-Bréhat, off Paimpol, a car-free paradise of stone cottages with ﬂower-ﬁlled gardens, spread over two islands that are linked at low tide. 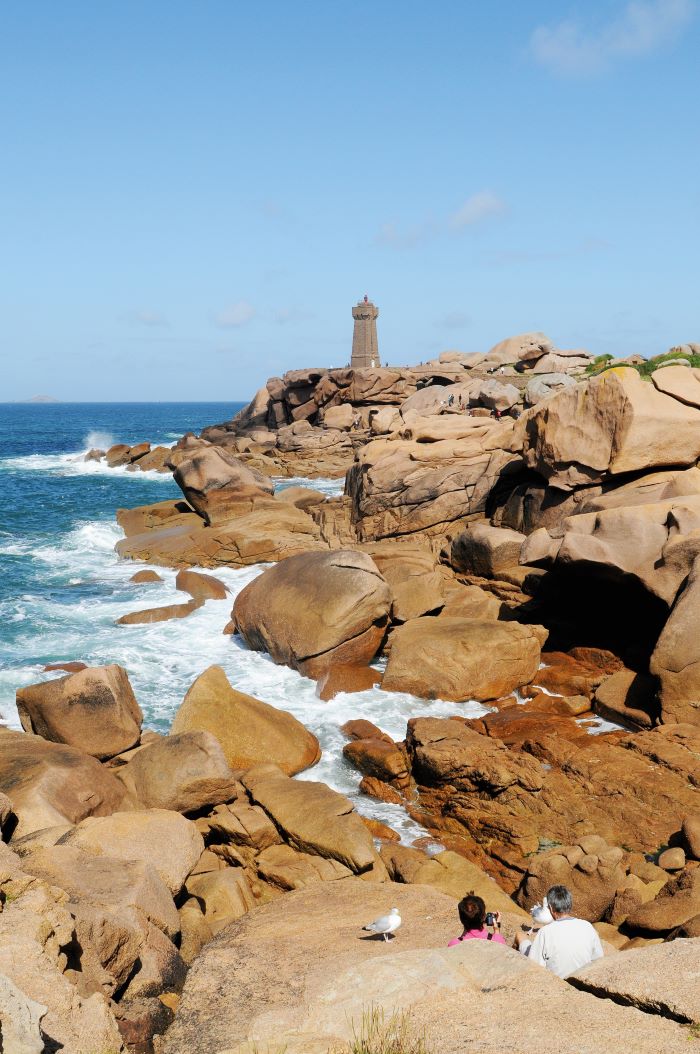 A lighthouse protects sailors from the rocky shoreline. © BRUNO TORRUBIA

Further west, a 15-minute boat ride from Roscoff delivers you to the delightful Île de Batz (pronounced ‘ba’), with its exotic gardens, lovely beaches, and quiet walks. It’s home to around 600 people but no cars.

Animal lovers may already be familiar with Ouessant sheep, native to a small island – Ushant in English – 30 km from Brittany’s far west point. Lighthouses warn sailors of strong currents here as well as off Pointe du Raz to the south, Brittany’s answer to England’s Land’s End, which faces the ﬂat outcrop of Île de Sein.

Head round the southern tip of the Bay of Audierne, and the Glénan Archipelago off Concarneau in Finistère is popular with sailors and divers in the summer months, whilst Île de Groix to the east of Lorient is Brittany’s second largest island. Largest of all is Belle-Île, a popular holiday destination reached from the Quiberon peninsula. Expect a temperate climate, dozens of idyllic small beaches, and a renowned opera festival. And just across the water in Quiberon Bay, tranquil Houat and its smaller neighbour, Hoëdic, are the perfect spots to play Robinson Crusoe. 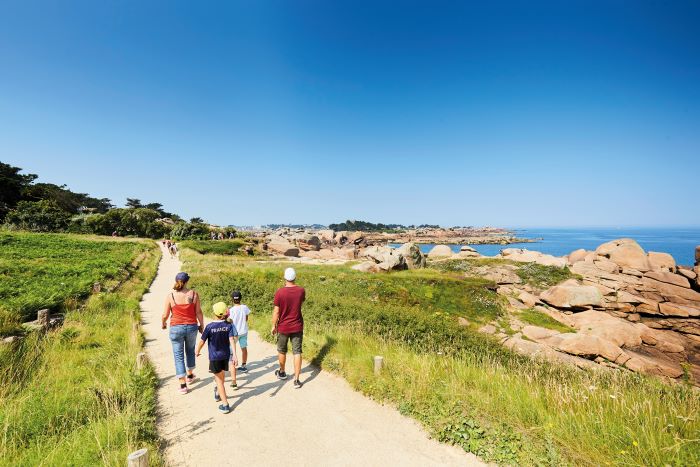 Brittany’s coast is addictive but one of my best Breton holidays took me inland from Roscoff on a journey of magic, mystery and discovery. First stop was Morlaix, a dramatic town where colourful half-timbered buildings line the sides of a steep valley crossed by a railway viaduct. Walk down the Grande Rue with its 16th century carved lintels, and stop off at a café in Place de Viarmes, where medieval houses give way to slate and stone in Rue Ange de Guernisac.

Heading south, I passed seamlessly into the Armorique Regional Nature Park to Huelgoat, one of Brittany’s most mystical spots with tales of giants amongst the trees and boulders of The Chaos. This small town lies on the southern fringes of the Monts d’Arrée, a ridge of hills that just scrape into the mountain category with a maximum height of 380m. 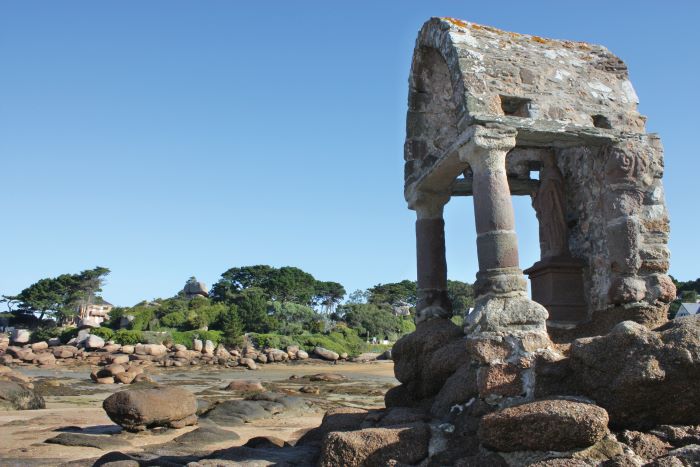 Book a guided tour to discover the legends of mischievous pixies – or korrigans – who turned wedding guests to stone in this moorland landscape, and enjoy circular views from the chapel of Mont Saint-Michel de Brasparts.

From Brittany’s mountains, I travelled east through the region’s heartland to reach its largest lake, the Lac de Guerlédan, created in 1930 by the inauguration of an EDF dam. It’s a 40km hike around the perimeter, but you can hire bikes or just sit quietly on the bank with a fishing rod. Heading south, I stopped off at Josselin, a small town famous for its large, turreted castle, before turning towards Paimpol and the remains of the once vast Brocéliande Forest. Forget naughty pixies, here the legend is firmly Arthurian with attractions such as Merlin’s Tomb and the Valley of No Return, the domain of Morgan le Fay, half-sister of King Arthur, who in a fit of fury turned a faithless lover and his mistress to stone, forming False Lovers’ Rock at the crest of the valley. 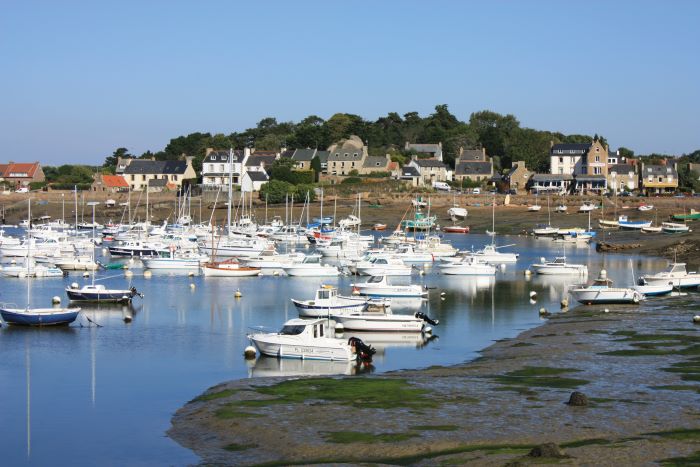 A swing north through Moncontour, one of four Breton villages with Plus Beau Village de France status, and I was back at the coast and an altogether different world. So tune into the Tour de France this summer and you will discover the many faces of one of France’s most popular holiday regions.