Cy Twombly at the Louvre 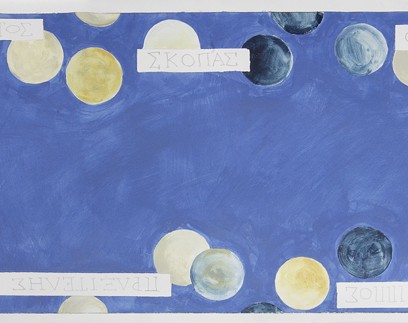 Cy Twombly has become the third contemporary artist to be commissioned to produce a work for the Louvre. Unveiled at the end of March, Twombly’s huge 3,800-square-foot painted ceiling for the Salle des Bronzes, in the Sully Wing, is a sky-blue field with dark blue, ocher and ivory spheres that seem to float around its perimeter; among the spheres are white strips inscribed, in Greek lettering, with the names of seven celebrated classic Greek sculptors: Polyclitus, Praxiteles, Lysippus, Myron, Phidias, Scopas and Cephisodotus (the name of both the son of Praxiteles and the man scholars think was his father).

Twombly’s ceiling for the Louvre follows commissioned works by German artist Anselm Kiefer, who installed a monumental painting and two accompanying sculptures in 2007, and French artist François Morellet, who redesigned the windows in the Lefuel staircase of the Richelieu Wing. Others who have decorated the Louvre in the past include Delacroix, Ingres and Georges Braque, whose 1953 three-panel ceiling-a deep blue sky with white doves-is in the former King’s antechamber adjoining the Salle des Bronzes.

Find out more at the Louvre’s site

Originally published in the April 2010 issue of France Today