Blois, Of Visions and Visionaries: The Chateau Inspiration for Asheville’s Biltmore Estate 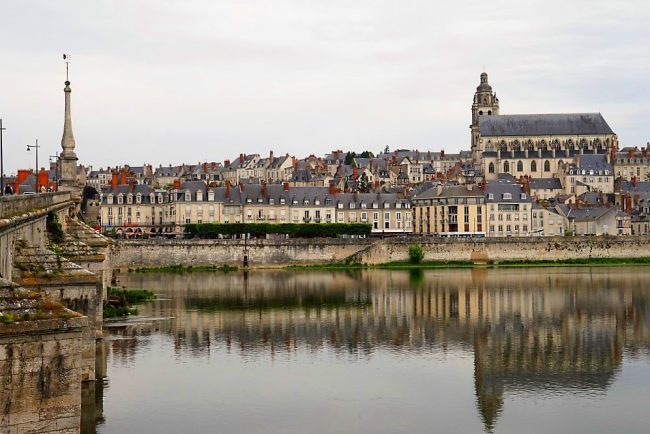 There are many châteaux in the Loire Valley, but only three interested a certain nineteenth-century railroad tycoon. Enthralled with French Renaissance châteaux, George Vanderbilt determined to build his own in the mountains of North Carolina, and today, his American-made château is the largest private estate in the U.S. As a native North Carolinian, I grew up visiting the Biltmore Estate in Asheville. Curiosity got the best of me. I wanted to see the châteaux that so inspired George Vanderbilt all those years ago. After touring Château de Chambord and Château de Chenonceau, I couldn’t wait to visit the third château of inspiration.

The town of Blois lies halfway between Orléans and Tours in the Loire Valley and is the capital of the Loir-et-Cher department in central France. Straddling the banks of the picturesque Loire River, this bustling town is split into two parts, north and south. All along the river, you can see beautifully designed residences, hotels, stores, and businesses. Gothic twin peaks of the Église Saint-Nicolas tower over one side of the northern bank while further down the shore, the imposing structure of the Cathédrale Saint-Louis dwarfs all of its neighbours.

Blois was first put on the palatial map by King Louis XII when he began to build the Château Royal de Blois in 1498. Originally built as a fortress in the ninth century, the château evolved into a palace worthy of kings– seven to be exact as well as ten queens. From the thirteenth century until the seventeenth century, the château passed through various royal hands, many of whom left their indelible fingerprints on the architecture and style of the château: Kings Louis XII, François I, Henry III, and Henry IV, and the Duke of Orléans. Over the course of time, the château hosted many other notable persons. Joan of Arc came in 1429 to be blessed before leading her army to victory at Orléans. Henry I, Duke of Guise and key figure in the Wars of Religion, came here in 1588 only to be murdered by King Henry III’s bodyguards, presumably on the grand staircase. It is said that Catherine de’ Medici, who died in her bedroom here in 1589, stored her assortment of potions and poisons in the nearby chamber of secrets. 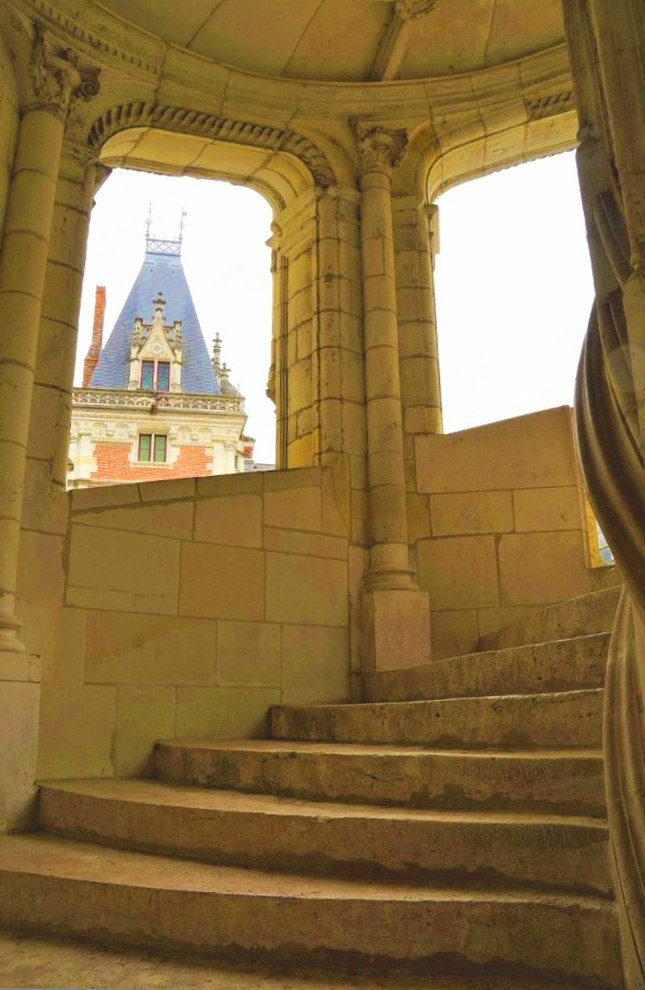 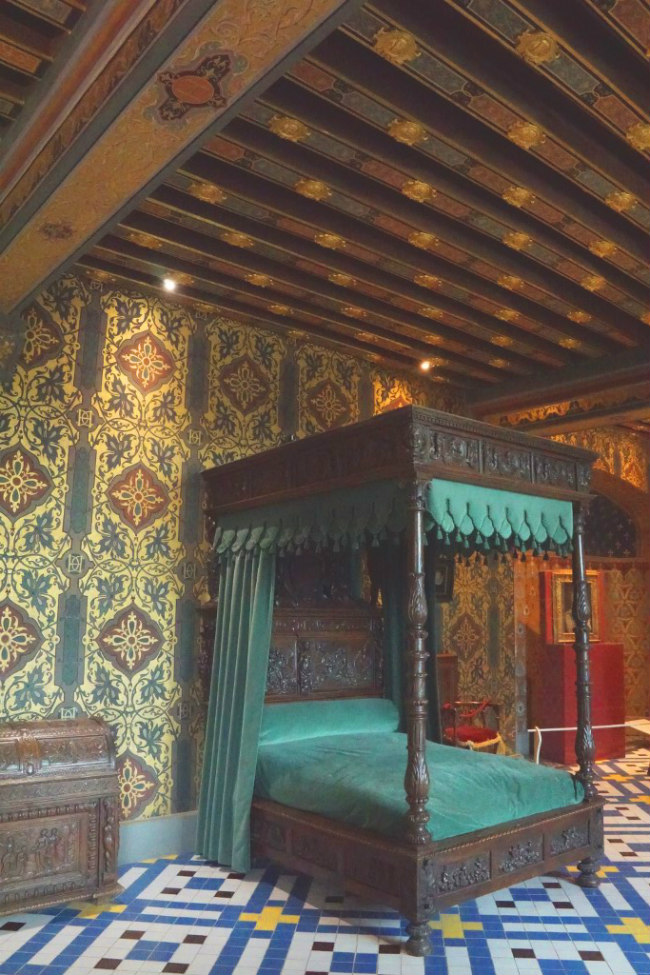 Set up on a hill, Château Royal de Blois has a commanding view of the town and the Loire. Today, you can visit many of the château’s 564 rooms (100 of which are bedrooms) and 75 staircases. In the courtyard, you will notice the varied architecture: the Gothic remains of the fortress, Louis XII’s Flamboyant style with its red brick, the more ornate Renaissance wing commissioned by François I, and the Classic wing built by notable architect François Mansart for Louis XIII’s brother, Gaston, the Duke of Orléans. The magnificent staircase built into the exterior of the Renaissance wing is reminiscent of the larger one at Château de Chambord. Rooms on the self-guided tour contain period furnishings, including a harpsichord from 1572 and a pianoforte from 1834. Ceiling beams are intricately painted, floors are covered with colorful tile patterns, and fireplaces are ornately gilded. Many paintings and portraits adorn the walls. For more art, don’t miss the Blois Fine Art Museum located in the first-floor royal apartments. 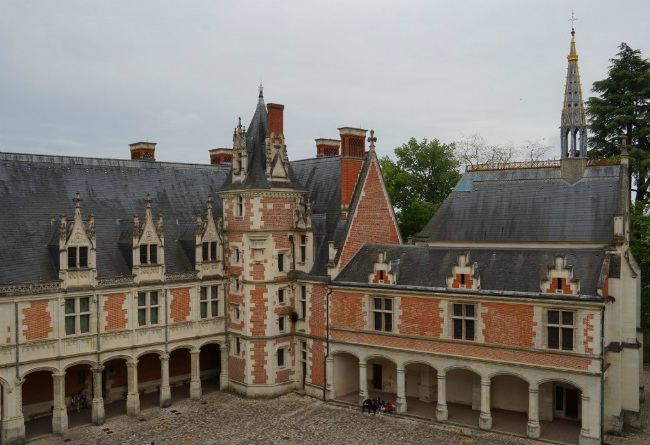 Before leaving the courtyard of the château, make sure you view the city from the terrace of the medieval Foix Tower to your left (from the visitors’ entrance as you face the Renaissance wing), just past the Saint-Calais Chapel. The panoramic view of the Loire and the town is worthy of a photo op. Beige stucco houses and buildings with slate grey roofs and orange brick chimneys, interspersed with a few half-timbered homes, are quite picturesque. 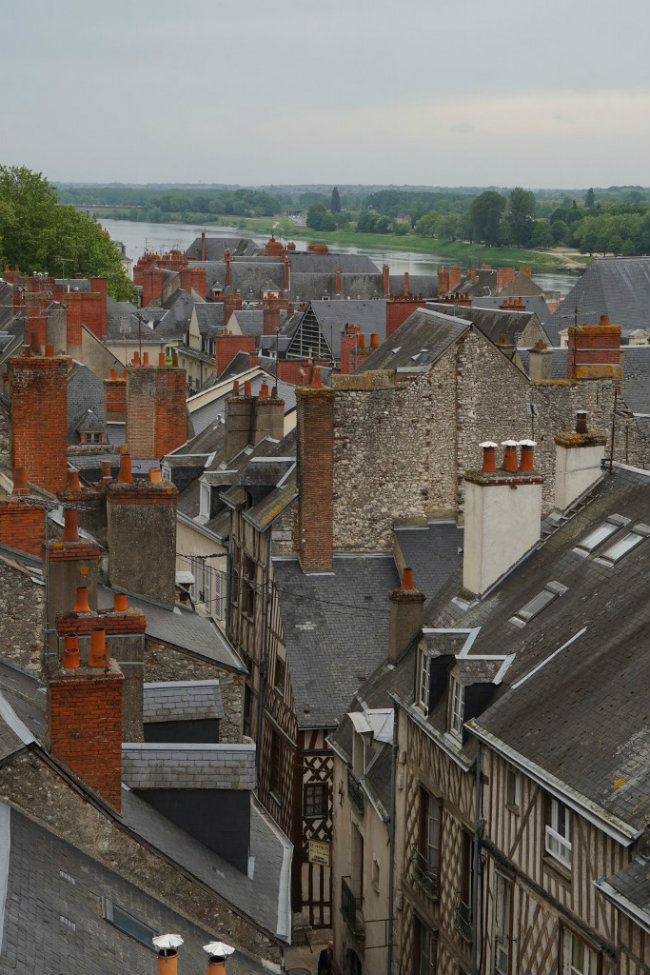 Blois is a very walkable town that begs exploration. Many charming cafés and shops dot its cobblestone streets. While the twelfth-century Église Saint-Nicolas stands near the château, the larger Cathédrale Saint-Louis is further north on the other side of the main avenue Rue Denis Papin. Next to the cathedral is the Hôtel de Ville with its manicured gardens. Although it’s a steep ascent up the narrow streets to the cathedral and the Hôtel de Ville, you will be rewarded with a magnificent panorama of the city. After admiring the view, head back down to the river and cross at the Pont Jacques-Gabriel to capture picture-perfect Blois, complete with mirror reflections from the Loire. 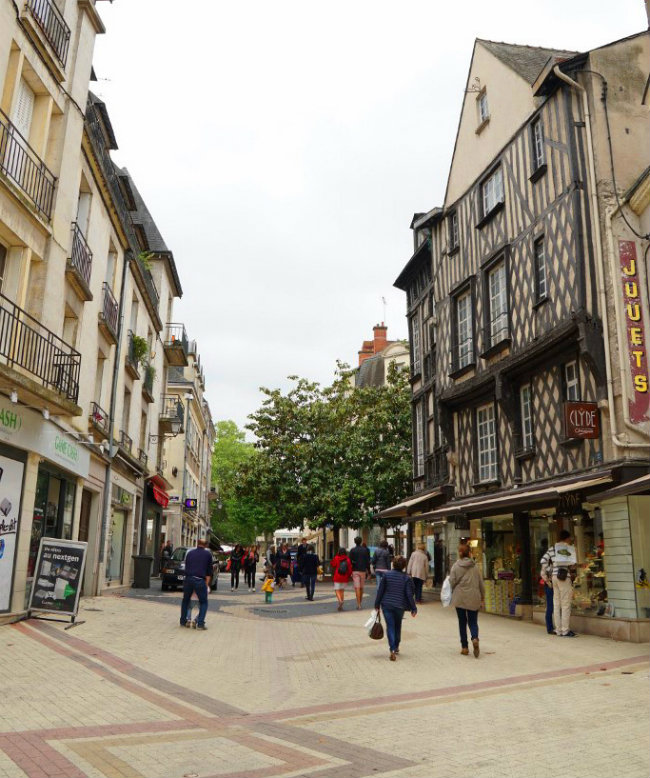 Quaint street in the heart of Blois. Photo: Dawn Dailey 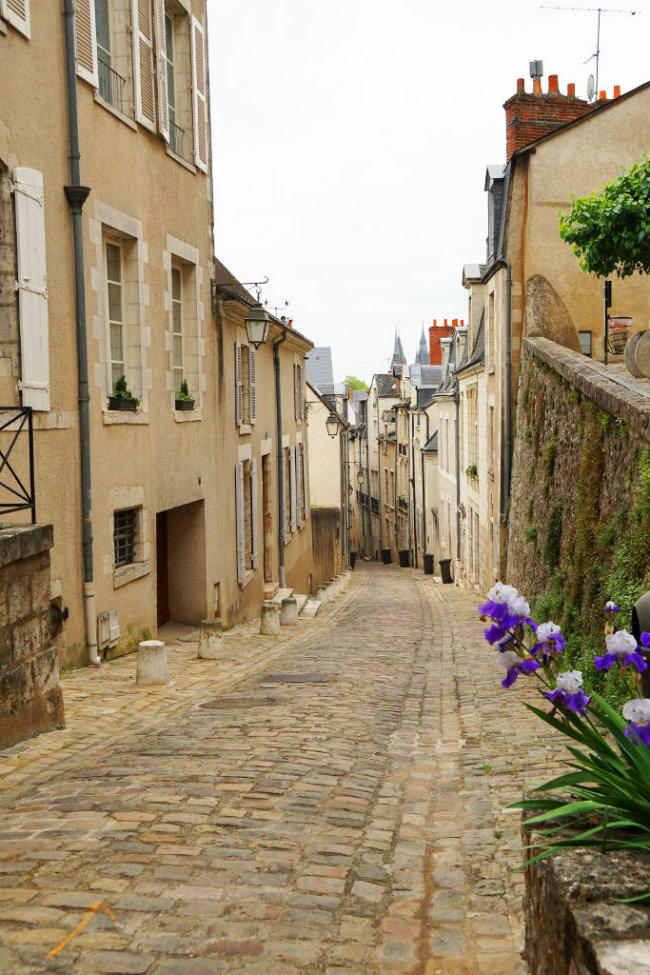 Standing in the château’s courtyard surrounded by centuries of architectural styles, I could see what George Vanderbilt saw: a beautiful castle with a grand staircase, formidable and impressive, with years of history and tales of intrigue from the many high-profile inhabitants. I appreciated his need to create his own fairy tale in the heart of the Blue Ridge Mountains and take the magic of this place home with him. Blois is a town that captured the hearts of kings and railway tycoons alike. And it captured mine, too.

Blois is less than a two-hour drive from Paris and is within minutes of Châteaux Chambord, Chaumont, Cheverny, Chenonceau, and Amboise. Download the app “Visit Blois” for a virtual visit. Or better yet, go there yourself. Visit http://en.chateaudeblois.fr/ for more information to plan your visit.