My Home is My Castle: Château de Vaux-le-Vicomte, Outside Paris 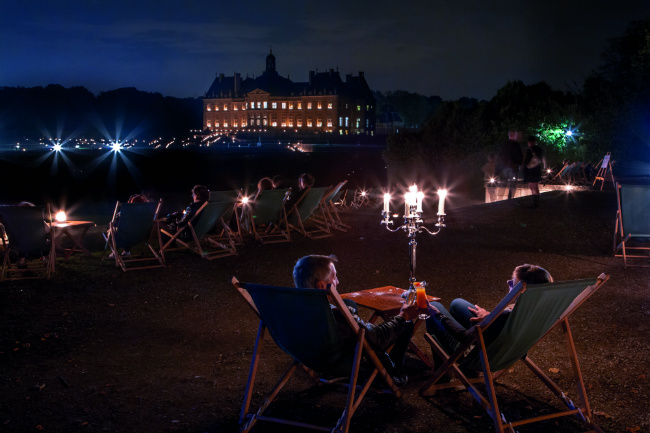 When an eerie bell rang, I put my champagne glass down and walked along the moat of the Château de Vaux-le-Vicomte toward the sound. The sun had just set, wisps of light still lingering, and thousands of candles were shimmering all around the castle, in its windows, along the paths, and the length of the garden. A handful of performers dressed in fantasy costumes marched up to the main entrance, then, to gentle music, transformed into white horses, lit from the inside. By now it was dark, and the effect was magical. For the next 30 minutes, I and the other visitors followed the performers’ procession around the château and through the gardens. Then the bell rang again, and it was over, until a further performance later on. But the candles still flickered, inviting a summer night’s stroll.

Château de Vaux-le-Vicomte (VLV) is the largest private residence listed as a historic building in France, and the family of Count and Countess de Vogüé pull out all the stops a few times a year to entice and enchant visitors. The most stunning are the summer candlelit evenings, one of which I was attending, when the château and the gardens are illuminated by 2,000 candles. Then there is the Grand Siècle Day, when VLV comes to life with hundreds of picnicking guests dressed in 17th-century costumes. At Christmas, all the gigantic open fires in the château are lit and festive decorations hang everywhere, while at Easter a large egg-hunt takes place in the gardens.

One of the three sons helping run the estate, Alexandre de Vogüé, tells me the family is dedicated to keeping the history and beauty of VLV alive, and do whatever they must to bring in visitors and raise funds for the upkeep of their home. And few homes are as filled with a history of such splendour and intrigue as VLV. The château is the predecessor of the Château de Versailles and was a trailblazer for innovative modern architecture in its day.

VLV was built for Nicolas Fouquet, Louis XIV’s Superintendent of Finances, who was known to love the arts, from paintings to music and literature. To create his perfect residence, befitting his status and exquisite tastes, he not only razed three villages in his way, but also brought together the three top men of their times: Le Vau, an architect famous already for his elegant buildings on the Île Saint-Louis in Paris; Le Brun, a painter whose ceiling of nine muses in the château is currently being restored and whose muses’ sensuality and beauty are still breathtaking today; and Le Nôtre, by trade head gardener of the Tuileries Gardens in Paris, but really more a landscape architect who would design and imagine rather than crouch on the ground planting anything. 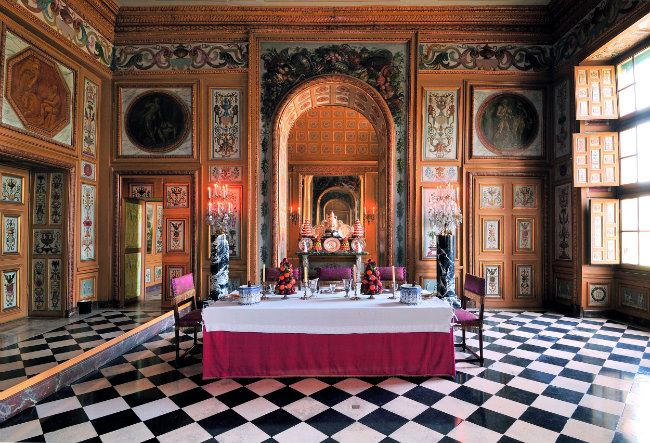 With the help of these three men, Fouquet built a moated château which was manageable in size, stunning but not overwhelmingly so, handy for Paris and a mere three-hour coach trip from Fontainebleau, the country residence of the king. Apart from its obvious beauty, the château exhibited some very modern touches; such as being built around a central dome, allowing for a grand entrance on one side, the dome in the centre, and views across the manicured gardens on the other, representing the castle and its gardens as one unit. And instead of one line of rooms on either side of the dome, VLV had two rows of rooms on the ground floor, upstairs and in the basement, with corridors offering privacy to its residents and guests; rather than having to walk through other rooms to get to their chamber. Commonplace nowadays, but until then something quite unheard of where French châteaux were concerned. Equally modern was the idea of a dining room. VLV’s state-of-the-art approach to living was quite a gossip-worthy novelty. 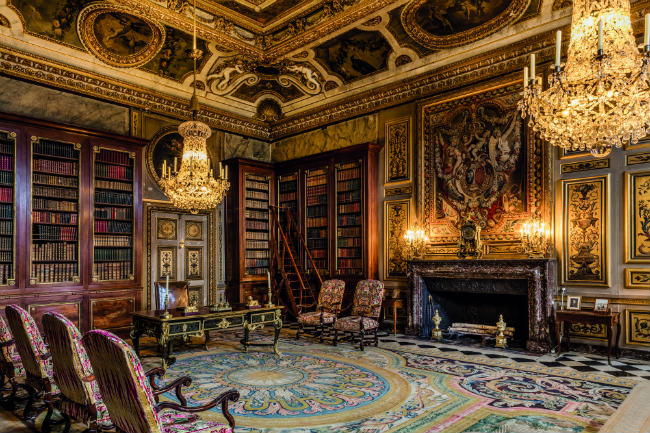 Similarly, the gardens, which were cut out of the forest and designed in the now commonly-seen oriental-rug style – with water features, curlicues, statues, and a canal at the bottom, made by diverting the nearby river – represented a previously unseen and ground-breaking aesthetic; one that led the way for future royal ‘gardeners’.

When the château was nearly finished in 1661, Fouquet decided to throw his king a party to show off his new home, complete with a specially designed king’s bedroom for him to stay the night. Alas, this was quite literally the beginning of the end. Court intrigue, subtly-placed rumours and probably some truth had already begun to niggle in Louis XIV’s mind. 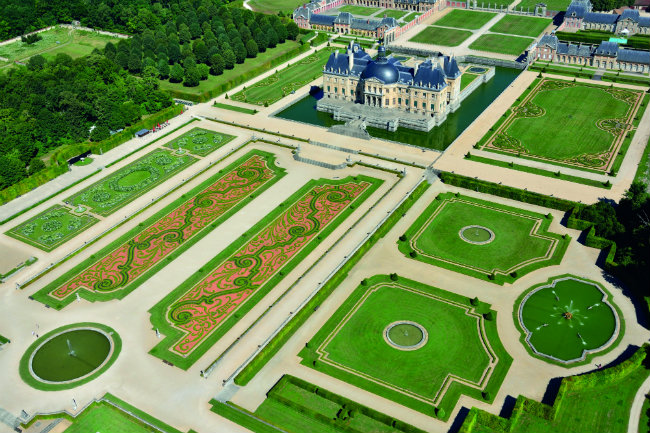 Upon seeing what must have been the party of the century, complete with the thousands of candles lighting the castle and gardens, the best food served on the finest silver, music by the court’s own Jean-Baptiste Lully, a play written for the occasion by Molière and performed by Fouquet’s own troupe of actors, the Sun King must have felt a little disgruntled. After all, he was ‘only’ living in the sprawling Louvre in the capital and the already slightly old-fashioned Fontainebleau in the country, with only a rustic hunting lodge in Versailles. He didn’t have a fancy new château full of Fouquet’s entwining initials, somewhat pretentious motto (Quo Non Ascendet – To what heights will he not rise?) or squirrels emblazoned on everything. And anyway: how had he paid for it all? Surely, he had pilfered some of the king’s money?

Louis XIV left the party in a huff, only to send d’Artagnan, of Musketeer fame, or so legend has it, to arrest Fouquet; who was sent to prison for embezzlement of funds from the royal coffers, and never set foot in the Château de Vaux-le-Vicomte again. To add insult to injury, the king immediately had the château stripped of all its glorious furnishings, head-hunted the three artists responsible for its beauty, and set about adding to his little hunting lodge in the forest of Versailles, turning it into one of the world’s most famous and splendid palaces. 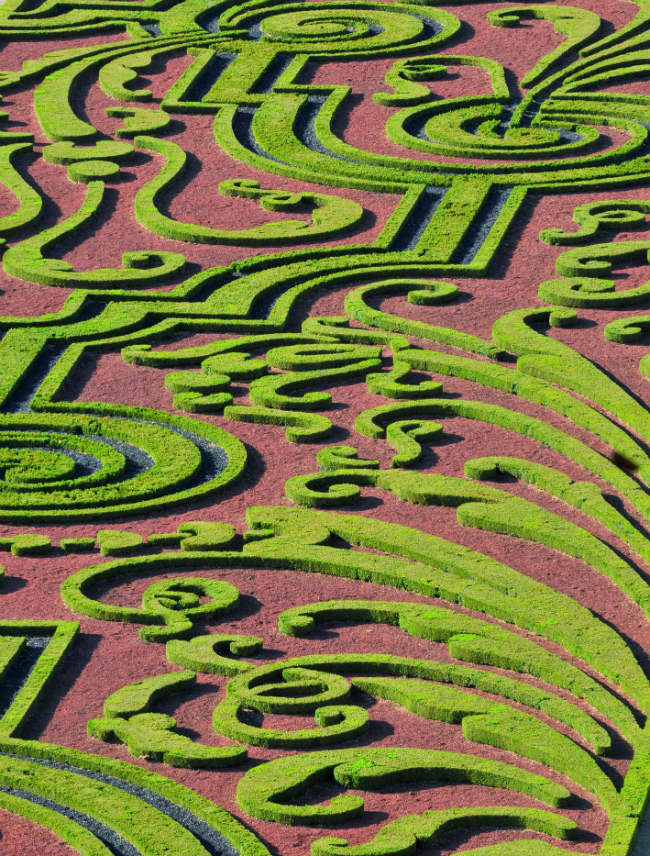 The art of the curlicue in the chateau gardens. Photo: Béatrice Lécuyer-Bibal

TAKING UP THE CHALLENGE

For a couple of centuries, VLV passed through what was left of Fouquet’s family, but, after several blows of fate, was eventually abandoned; only to be snapped up at auction in 1875. Reportedly, Alexandre de Vogüé’s great-great-grandfather, Alfred Sommier, was the only bidder; others probably knew what a great responsibility it was to take on. But he and his family took up the challenge and, to this day, work tirelessly to restore, maintain, and love the château with all they’ve got, and then some.

“My nearly 90-year-old father comes to work every morning; Vaux-le-Vicomte is his baby, his life, his dream,” says Alexandre de Vogüé. He admits that, while all involved in different aspects of running the estate, he and his brothers also try to have a life outside VLV. But it is now a family heirloom that demands a lot of attention and money. 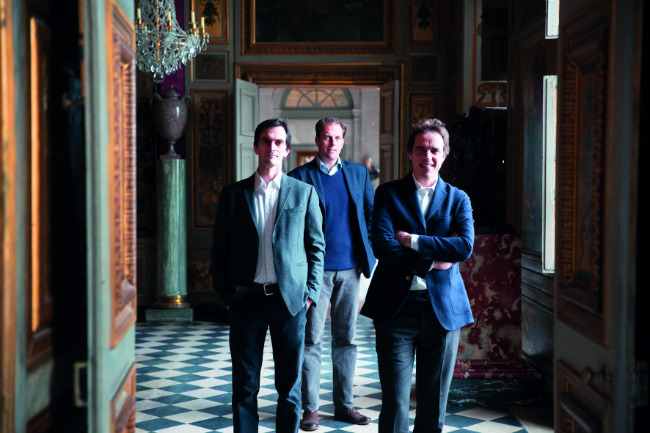 “Back in 1968, we were still living in the château,” Alexandre continues. “My father decided to open the château to the public to try and earn some money toward the ongoing restorations, but also to share his dream, and a building of immense historic importance, with visitors.”

Before the public arrived at 10am every day, the children had to tidy up their toys, hide the television, and turn their home back into a 17th-century château. This proved to be too impractical and in the end the family moved to the refurbished stables on the estate. In 1975, work began to furnish the château with antique mobilier, as befitted Nicolas Fouquet’s stunning abode. 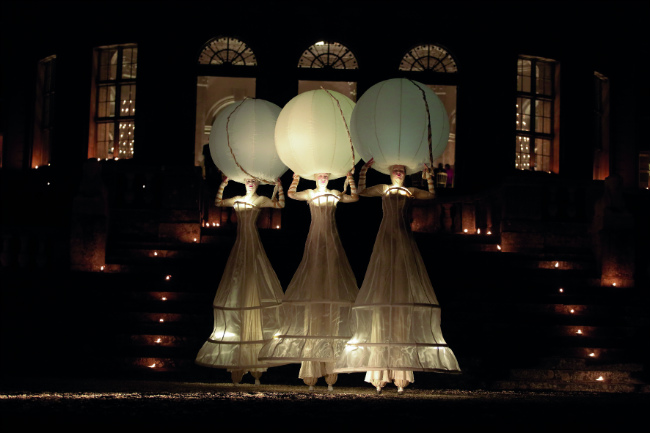 THE KING TOOK EVERYTHING

“We have only a handful of pieces that actually once belonged to Fouquet,” says Alexandre. “The king took nearly everything, from tapestries to paintings, even the orange trees from the grounds. To decorate the rooms as they once were, to buy items that belonged to the right era, we had to sell off non-fitting furniture. Our dream is to gather some items of the original collection of furniture and art for an exhibition at some stage. We have scholars researching where the originals might be, and who would own items to lend for the exhibition.”

There is a persistent rumour that a piece of furniture in the Château de Vaux-le-Vicomte is worth a million euros. So which one is it?

“We have a 1704 chest of drawers made by André-Charles Boulle, the cabinet-maker to the queen,” reveals Alexandre. “With there being only three or four in the world, the monetary and historic worth is nearly immeasurable. More importantly, it is very beautiful.” 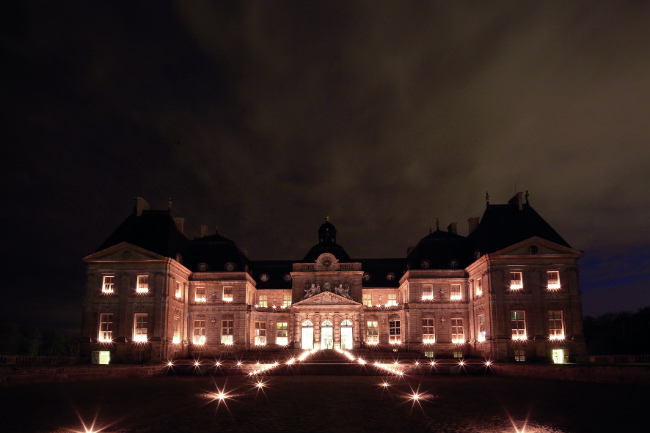 The chateau lit up at night. Photo: Yann Piriou

But it’s not just furnishings that need to be considered. Looking after a building, any building, takes money and effort. In the case of a château set in 1,235 acres of gardens, it’s a race against time.

“Until recently, we used our funds only for emergencies, a leaking fountain, crumbling stonework; getting quotes in from artisans takes months, by then something else starts falling apart,” Alexandre explains. “Now, we have a ten-year plan, detailing what to do and when; a plan that includes a project of infrastructure restoration, restoration of the garden, and smaller projects; all with anticipated costs next to it. We make this list public for our donors, and people can sponsor a special project, such as restoring a statue in the garden.” 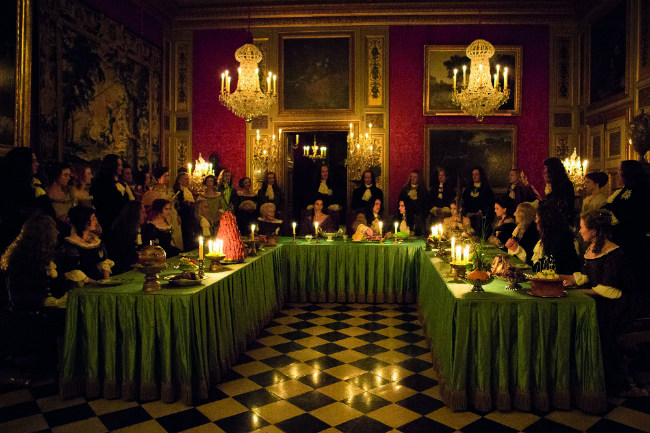 A still from the TV series “Versailles”, which was filmed at the chateau

Apart from relying on income from visitors and donors, the family has also been opening VLV to filmmakers and TV crews from around the world. Just recently the TV series Versailles was filmed right here – and not, in fact, at Versailles. So far, some 70 movies have been filmed at the château, with those probably best known to a non-French audience including Moonraker, The Man in the Iron Mask, and Marie-Antoinette. And, speaking of The Man in the Iron Mask, the persistent but untrue rumour that Nicolas Fouquet was the famous prisoner is happily being fuelled down in the basement, with an effigy of the man in the mask locked up in a dungeon. Alexandre admits that it takes work and effort to maintain a historic château. But does his family ever regret this immense responsibility? “Never,” he says. “It has always been a privilege that we own such an important piece of history. It is part of our life.”

VLV is open every day until November 5, 2017, with candlelit evening visits possible on Saturdays from May 6 to October 7. It will then open every weekend and school holiday from November 25 to January 7, 2018. Website: www.vaux-le-vicomte.com 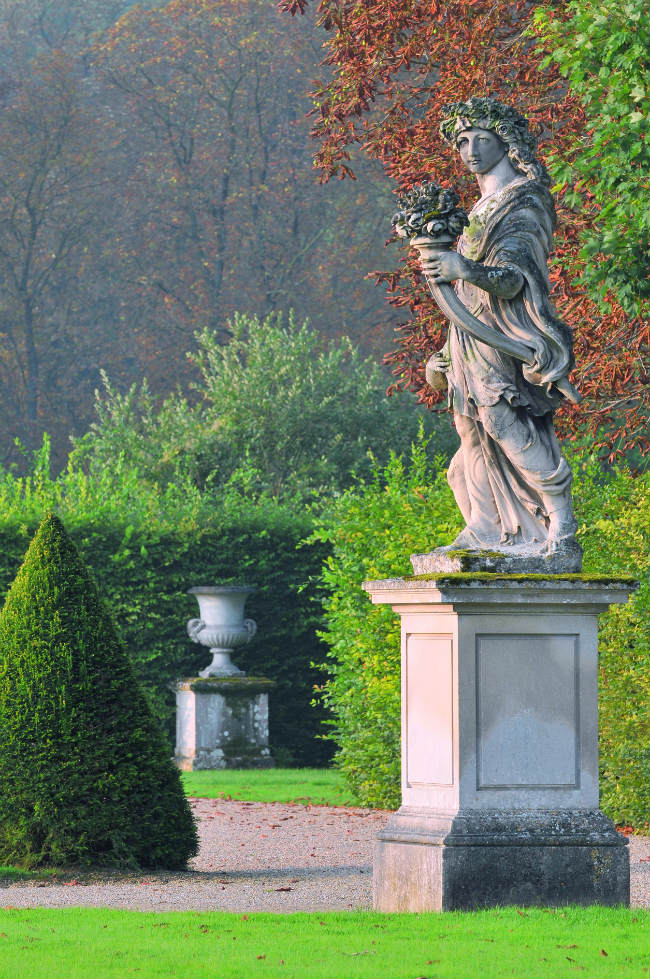