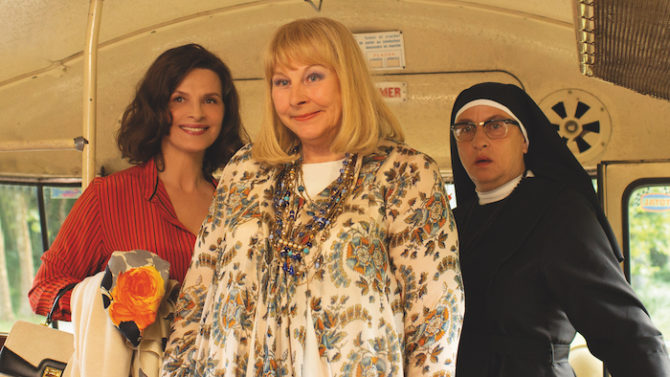 Juliette Binoche gets to showcase her comedic talents in this goofy comedy about an old-fashioned housekeeping school for girls in the late 1960s.

Directed by Martin Provost (his movie Séraphine won the 2009 César for best film), the action starts in Alsace in 1967 where Paulette Van der Beck (Binoche) finds herself unexpectedly running the school following the death of her boozy and lecherous husband Robert (François Berléand).

Aided by her sister-in-law Gilberte (Yolande Moreau) and nun Sister Marie-Thérèse (Noémie Lvovsky), Paulette does her damnedest to keep control of the failing school and its outmoded housewifely principles, its new batch of rebellious pupils and a rather unfortunate rabbit stew-related incident courtesy of the hapless Gilberte.

Cue potential saviour and romantic interest André (Édouard Baer), an old admirer, who sparks a new lease of life in Paulette. The action is set against a background of radio reports detailing growing unrest in Paris as the tension builds towards the wildcat strikes and civil unrest which shook the whole of France in May 1968. To this day, May 68, as it is simply known, is considered a political and social turning point for the country.

Stylishly filmed in the same retro vein as Mad Men (the fabulous period design is by Thierry François), La Bonne Épouse (How to be a Good Wife) satirises old-fashioned sexual politics and has a lot of fun in the meantime.

Binoche, dressed to kill as the epitome of an elegant 1960s domestic goddess, delivers a charming, tongue-in-cheek performance, while Moreau takes kooky to a whole new level. However, it has to be said, it’s Lvovsky who really steals the show with her perfectly-pitched comic talents.

And as if all that weren’t enough, there’s a show-stopper of a musical number too, through which Binoche rewrites the school rules in line with the new era of feminism. Provost may not be a natural at comedy, but if you like very silly and very funny movies, this one’s a blast.

Previous Article O Brotherhood, Where Art Thou?
Next Article My Life in Paris: A Night to Remember