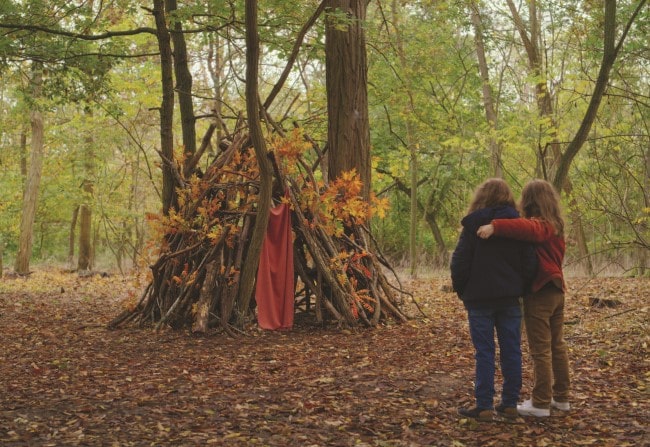 Eight-year-old Nelly has just lost her maternal grandmother. She sets off with her parents (Nina Meurisse and Stéphane Varupenne) to clear out her grandmother’s (Margot Abascal) home, where Nelly’s mother, Marion, grew up.

Nelly (Joséphine Sanz) enjoys exploring the house and the surrounding woods where her mother once built a den. One morning, she wakes up to find her mother gone, too upset to carry on with the clear-out, it seems.

This is when Nelly meets a little girl in the woods, who is busy building a fort. She is her age and very friendly – and her name is Marion (played by twin sister Gabrielle Sanz).

Petite Maman is a modern fairytale, full of both heartbreak and hope, about the friendship between a little girl and her mother as a child. It is tenderly poetic and beautifully filmed in muted tones.

Writer/director Céline Sciamma says the story came to her when she was writing the multi-award winning Portrait of a Lady on Fire (2019). She returned to it during lockdown and soon it developed a life of its own. Sciamma points to the recent challenges faced by children in today’s society, such as school shootings, the pandemic and the #MeToo movement. “If politicians have never officially addressed this directly, it remains the case that the children have experienced everything and understood everything. It seems vital to me to include them, to give them narratives, to watch them, to collaborate with them,” she says.

She adds: “I really enjoyed working on this idea, it was moving and playful. This enthusiasm comes through in the film, I hope.” It certainly does.

Previous Article Survivor’s Guide to the Louvre
Next Article Read the Signs: Rue d’Artagnan in Paris