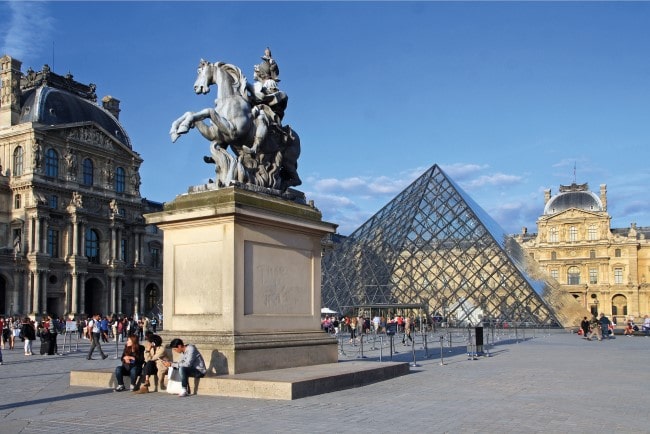 The Louvre is the world’s most famous museum – and its most visited. Armed with the right tips and plenty of time, you can see all its famous icons and more without getting caught in the crowds. Jennifer Ladonne reveals how…

Along with being the world’s most famous and most visited museum, the Louvre is also its biggest. With more than 780,000 square feet of exhibition space – about the are of a dozen football fields (or eight miles if stretched out end-to-end) – and about 35,000 works on view, it’s no wonder visitors can feel daunted even before stepping foot in the building.

It would take the better part of a year to see every artwork in the Louvre, but there are plenty of ways to get the most out of a day, or even a few hours, armed with a map and a little advance planning.

Louvre at a glance

Originally built as a fortress in 1180, the Louvre was expanded and repurposed as a royal residence in the 14th century. Over eight centuries, the edifice grew ever larger with each passing monarch. Although the Louvre officially became an art museum in 1793 during the Revolution, plans were already under way to use at least part of the behemoth as gallery space for the various collections acquired, or pillaged, over successive centuries, kings and curators. Each of the Louvre’s three principal wings – the Denon, Sully and Richelieu – bears the imprint of a different monarch.

There is beyond a doubt something for everyone at the Louvre. Besides a treasure trove of artworks, the museum’s architecture, interiors, history and the sheer variety of its collections is vast and beyond compare.

That’s why a little planning goes a long way: identify what most piques your interest and let that be your guide. If it’s European paintings – including the Louvre’s resident icon, Mona Lisa – head straight to the first floor (second floor to Americans) of the Denon wing, where you’ll also find the museum’s spectacular Grande Galerie – an immense sky-lit corridor stuffed with Italian masterpieces – as well as the Nike of Samothrace, the Winged Victory for short, lording it over a staircase. If it’s sumptuous interiors you prefer, head to the Richelieu, where Napoleon’s eye-popping piles of red plush, gilding and crystal push the boundaries of good taste, or the gorgeously restored Galerie d’Apollon – precursor to Versailles’ Galeries des Glaces – where the French crown jewels have resided since the 19th century.

History buffs should not miss the Pavillon de l’Horloge, in the Sully wing at the heart of the palace, where the story of the Louvre is told over four floors, starting at the actual foundations of the original medieval fort and continuing to the oldest room in the palace – the Salle Saint-Louis – all the way up to the Salle de la Chapelle at the top, boasting the best views of the Tuileries gardens, the Pyramid, the Champs-Élysées and the Arc de Triomphe in the distance.

These are the museum’s most popular, and crowded, areas. But go a little deeper and you’ll be amply rewarded. The museum’s Egyptian collection, created by renowned scholar Jean-François Champollion, who famously cracked the hieroglyphs on Napoleon’s looted Rosetta Stone, covers 5,000 years of Egyptian history and is one of the most impressive collections in the world. One of the museum’s most prized possessions awaits you in the Persian rooms – collected by French archaeologists over 25 years – where the stately remnants of the Palace of Susa (one of the world’s oldest cities, mentioned in the Bible’s Book of Esther) include a stunning column flanked by two kneeling bulls. The soaring 30,000 sq ft Islamic wing, housed under a luminous modernist canopy, is another treasure trove loaded with luxuriously wrought artworks, furnishings, rugs, mosaics and decorative items from the palaces of the caliphs.

Wandering through these collections is a joy, all the more so as they are wonderfully crowd-free, aside from random groups of French school kids.

To see or not to see?

The fact that nearly 80 per cent of the Louvre’s 30,000 to 50,000 visitors a day said they came solely to see Mona Lisa could be interpreted two ways: one, this is a once-in-a-lifetime, everyone-must-do thing or, two, she is to be avoided at all costs. Notice that neither option has much to do with the 30in painting’s artistic merit. Nifty new Prussian blue background and orderly cordoned aisles aside, the Louvre’s recent upgrade of Room 711 has done little to make the experience more enjoyable. Guards still hover and nudge you along at a clip, and smartphones, heads and elbows still insult your view, if not your person.

If you decide to see what the fuss is about, book your ticket for 9am when the museum opens. That way, you can make a beeline straight to the Denon wing, follow the signs, and have a relatively crowd-free viewing.

Keep in mind that housed in the very same room as La Gioconda and, from what I could see, going largely unnoticed, are some of the Louvre’s great Venetian masterpieces by the likes of Titian and Veronese (Veronese’s The Wedding Feast at Cana, the largest painting in the Louvre, is a few doors away). Also bear in mind the unfathomable fact that as the line snakes along in front of Mona Lisa, just outside in the Grande Galerie a 20-second walk away, are three da Vinci masterpieces: La Belle Ferronnière; The Virgin and Child with Saint Anne; and Saint John the Baptist, often without a soul in front of them

Though definitely useful, the Louvre’s detailed unfolding map of each wing, with inset photos of the highlights, is confusing. Within what’s depicted as single hallways lies a rabbit’s warren of smaller galleries represented by numbers. If you do get lost – and you will – don’t be too shy to ask a guard for directions.

Do not accost them with your question, be sure to begin your inquiry with a polite, “Bonjour Madame/ Monsieur…”. They are much more likely to help you if addressed this way.

The Louvre does have access for disabled people, with several dedicated lifts in each wing that a guard will gladly guide you toward. Agents at the Carrousel du Louvre entrance are equipped with information on the best routes for moving between floors. Restrooms are surprisingly plentiful and clean.

Where to dine and relax

If your early morning date with the Venetians has left you flagging, the Louvre has plenty of options for restoration and relaxation. Just outside the Salle Mollien (Room 700) is a boutique and the Café Mollien, with a lovely outdoor terrace and views over the Tuileries gardens. Salle Mollien, also known as the Red Room, is home to the museum’s gargantuan masterpieces, including Géricault’s The Raft of the Medusa, Delacroix’s Liberty Leading the People, and Ingres’s sinuous Grande Odalisque. On Richelieu’s mezzanine, between a spacious new Starbucks and the cafeteria-style café Goguette, you can have a hot meal or a pricey coffee. You can also get a drink and a snack at takeaway counters on the mezzanine of Denon and Richelieu, with limited seating. The Louvre’s resident Café Marly (reachable through the museum courtyard without a ticket) is stylish, so-so and expensive, but with an unparalleled courtyard vantage point.

If you don’t mind stepping off the premises (a much less-crowded proposal), at the Carrousel du Louvre, a high-end underground mall reaching from the rue de Rivoli or the metro (metro line 1; stop: Louvre-Rivoli), you’ll find the Restaurants du Monde food court, where you can dine on Italian, French, Chinese, Turkish- Greek or Spanish fast food. In the Tuileries Gardens you’ll also find food stands. These are detailed on the Louvre’s handy app.

Shop till you drop

The Louvre boutique, located in the Carrousel du Louvre, is the museum’s main shop. Along with the usual jewellery, scarves, bags, dishes, postcards and so on, you’ll find an area unique to the museum: the Chalcographie du Louvre. Here you can choose from hundreds of original prints made at the Louvre’s own atelier and dating from 1850 to the present. The collection includes pieces by renowned contemporary artists such as Jenny Holzer, JR (of his large-scale projects at the Louvre) and Arnulf Rainer, as well as hand-coloured botanical prints, maps of Paris, landscapes and more, ranging from €50 to €500.

If the sheer enormity of the Louvre and the treasure therein counsels us to narrow our visit to the must- sees, wandering aimlessly in the great French tradition of the flâneur has its rewards. Putting aside all expectations and FOMO to enjoy the unanticipated wonders unfolding gallery-by-gallery is maybe the greatest pleasure of visiting this splendid museum.

What’s for sure is there’s no time like the present for a visit to the Louvre. For all the awfulness wrought by the pandemic, it has opened an unprecedented opportunity for art lovers in Paris. In 2020, 2.7m people visited the Louvre, down from 9.6m in 2019. While tourist numbers are slowly increasing, the relatively minor inconveniences of having to pre-book (tickets are rarely sold out more than four days ahead of time and are refundable up to 24 hours before your visit), present a pass sanitaire and wear a mask are well worth the pleasure of unencumbered views and the chance to stand uninhibited in front of masterpieces. On several recent visits, I was utterly alone with Vermeer’ Lacemaker and Rembrandt’s Bathsheba at Her Bath.

What could be better?

The Louvre is open every day except Tuesday, from 9am to 6pm.

Tickets, purchased online, cost €17 and can be used to access both the permanent collections and temporary exhibitions.