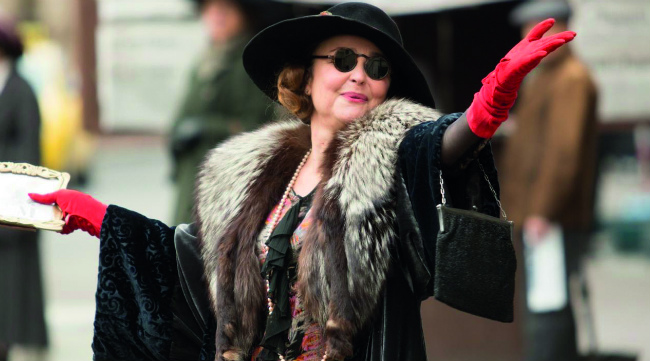 Catherine Frot’s career could be summed up as ‘Good things come to those who wait’. And Lord knows she’s waited more than most.

The long-suffering actrice clinched her breakthrough role and first Best Supporting Actress César (in one fell swoop) at the not-so-tender age of 39 – when even the most dogged of thesps would have called it a day. And she received her first Best Actress award exactly two decades later in 2016, making her (brace yourselves) seventh time lucky. In case you were wondering, Frot is France’s fifth most award-nominated actress of all time with ten César nominations under her belt.

The woman has the patience of a saint, or the determination of the devil – or a bit of both; useful qualities if you’re to keep your head above water in a fickle film industry. But back to the dog days.

Tired of being typecast as straight-laced bourgeoises, goody two-shoes or ditzy bubble heads, courtesy of her idiosyncratic pinched features and elfin mien, she shelved her silver screen dreams relatively early on and settled on a far more promising theatre career.

Ironically, she’d finally made her peace with her thwarted ambitions when she caught her life-changing break in the movie adaptation of acclaimed play Un Air de Famille, which saw her reprise her role as a dippy trophy wife and scoop the Best Supporting Actress César for the privilege in 1997.

The chameleon of French cinema, despite her distinctive looks, she wasted no time in capitalising on her belated stardom. Quietly chasing that all-elusive Best Actress gong, she tackled a truly eclectic range of leading ladies and supporting characters – from a repentant terrorist in Cavale and a sadistic mother in Vipère au Poing to an insufferable pianist in psychological thriller The Page Turner and the first female chef appointed at the Elysée Palace in Haute Cuisine.

Her powerhouse performance as the eponymous tone-deaf heiress and would-be opera singer in Marguerite, a biopic loosely based on the life of Florence Foster Jenkins (released a year before Stephen Frears’s copycat starring Meryl Streep) finally sealed the deal.

Frot has since revealed she knew in her heart of hearts she had that gilded César statue in the bag. ‘How cocky!’ we hear you grumble. Nope, just basic odds and probability theory. After losing out six times, she was long overdue a win.

Early career: Having tried in vain to hack it on the silver screen, she settled on a stage career. That is, until she was asked to reprise her role as a trophy wife in the movie adaptation of award-winning play Un Air de Famille and was propelled to stardom at the age of 39.

Where will we see her next? Frot is set to star opposite Daniel Auteuil in José Alcala’s latest comedy, T’exagères, as Simone, a put-upon wife who finally plucks up the courage to leave her anger-prone husband.

C’est pas vrai! She dreamed of being a geologist, until it became clear she only “loved pretty rocks” and had no inclination towards science. On a different note, she is a serial napper and takes an average of three 30-minute siestes per day, even on set.

Previous Article Le Dernier Mot: La Génération Sandwich
Next Article The Heritage of Montpellier: Top 5 Things To See and Do