50 Years in Fashion: An Interview with Jean Paul Gaultier 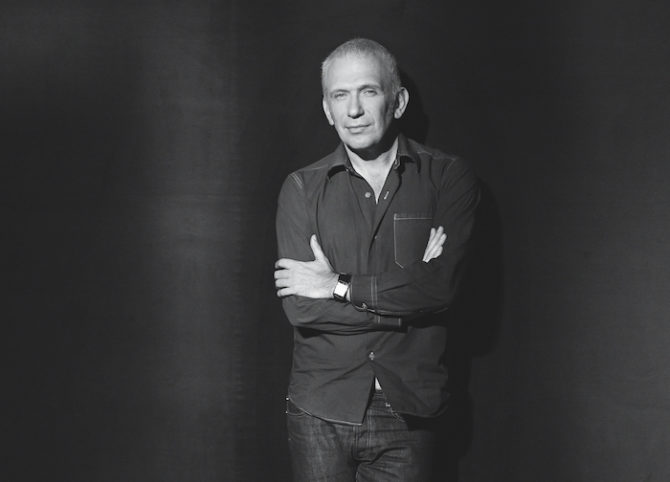 As his legendary catwalk career comes to a close, Jean Paul Gaultier – one of France’s finest, not to mention freakiest, designers – shares with Chloe Govan the highlights of his five decades in fashion

It’s the end of an era – the curtains have finally closed on Jean Paul Gaultier’s last ever catwalk show. During a 50-year career at the helm of an international fashion brand, many of the world’s most famous celebrities have been seen in one of his creations. Who takes centre stage among those he dressed? Kylie Minogue? Kate Moss? Madonna?

Mais non! Contrary to all expectations, his biggest brand ambassador is not a model, musician or actress, but a battered and beloved childhood teddy by the name of Nana – according to Gaultier, “the world’s first ever transgender bear”.

It was Nana who sparked Gaultier’s imagination and first brought his fashion ambitions to life. It all began in childhood, after he embarrassed his straight-laced parents by pleading for a blonde-haired Barbie. Believing, not unreasonably, that a Parisian boy might be teased relentlessly for coveting a doll, they compromised by buying a teddy instead. Fashion history had begun!

The young Gaultier cheerfully set about mutilating the poor bear – stabbing at her with sewing needles, daubing her with garish neon green eyeshadow and performing a simulation of France’s first ever open-heart surgery on her while the TV screened the real event in the background. Then, of course, there was the time when he dressed her in a prototype of his iconic conical bra. “I was about six years old when I cut up the newspapers and made a little cone bra for her,” he elaborates. “I also used my grandmother’s make-up and added some rope for hair.” Of course, years later, the exact same Gaultier design would appear on Madonna, who made the creation famous when she sported it on her 1990 Blonde Ambition tour. Yet, as he will passionately argue, with a hint of wry and gleeful satire, it was the bear who had worn it first. “She is quite a star now,” he muses. “She travelled the world with the exhibition ‘From the Sidewalk to the Catwalk – the Fashion World of Jean Paul Gaultier’, and was on stage every night during the Fashion Freak Show I put on at Paris’s Folies Bergère.” Perhaps unsurprisingly, he adds, “I always did my work seriously… but with humour.” 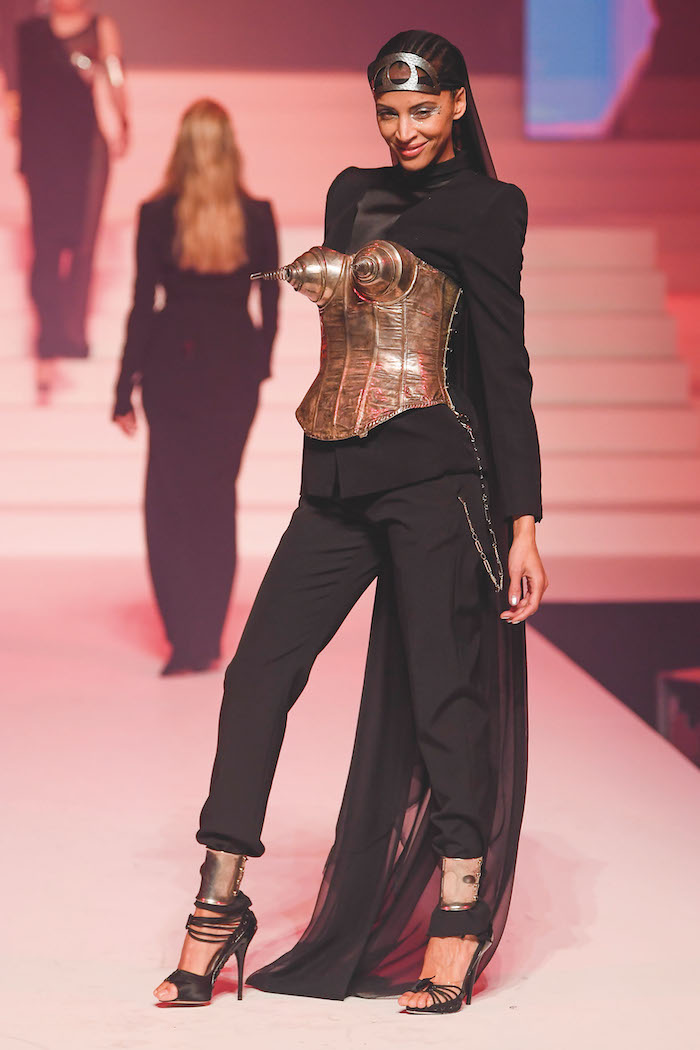 Bear banter aside, his work has also been hugely inspired by growing up around the French capital. Born in the Paris suburb of Arcueil, he spent much of his childhood “daydreaming and sketching” while creating early versions of the kitsch Gaultier classics that we have come to expect from the “proudly freakish” designer. “I love my country, I love the clichés like the Eiffel Tower,” he enthuses. “I have used them continuously through my career.”

Besides that, the seaside fishing village of Saint-Jean-de-Luz, between glitzy Biarritz (once favoured by Chanel) and the sultry Spanish border, has been another huge inspiration. As the location of his second home, it inspired his “sailor chic”, most recently seen on the Hadid sisters, including, of course, those Breton stripes. 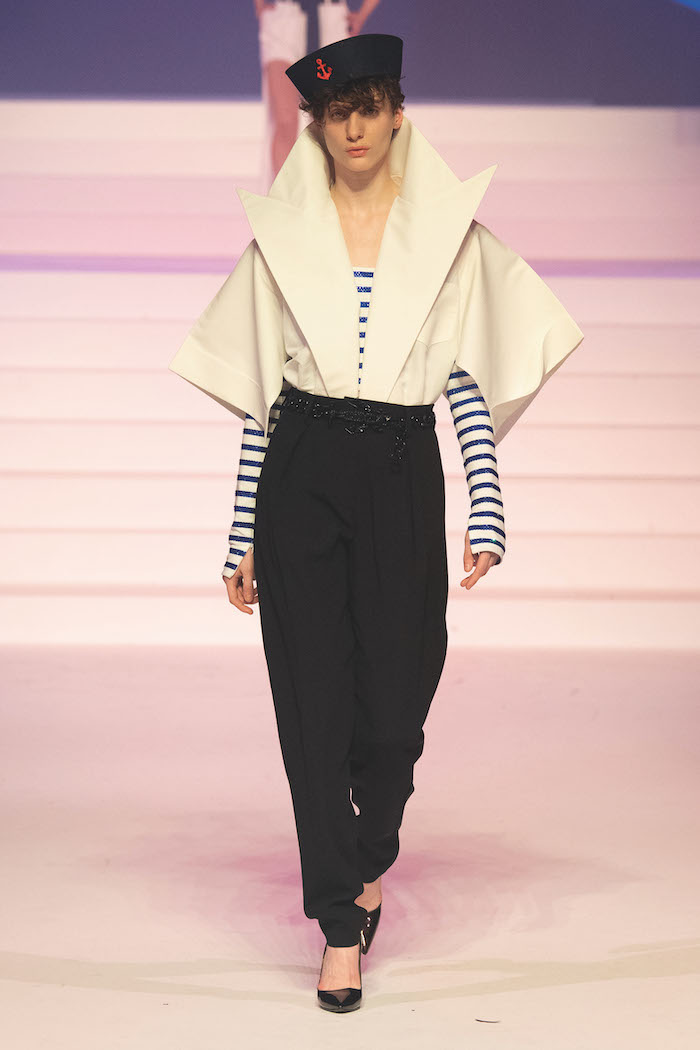 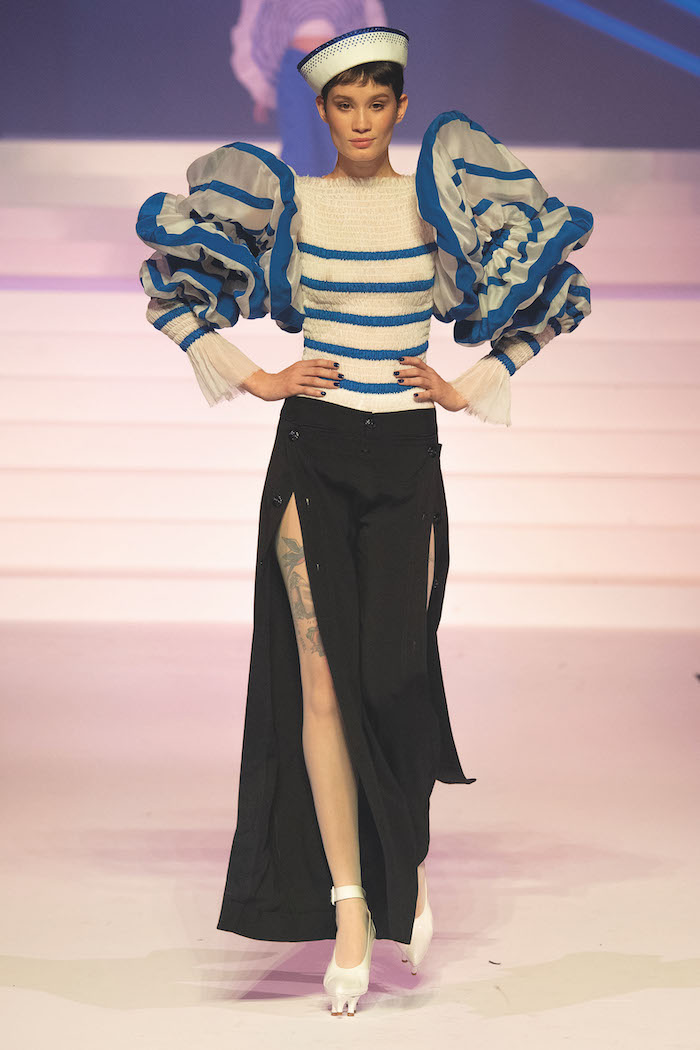 Yet Gaultier’s world wasn’t all light-hearted humour and superficial seaside glamour. Some of his designs broadcast intense political messages about gender equality and freedom. “Our work is a reflection of the society that surrounds us,” he muses.

“When I proposed a skirt for men, I saw that the men were changing and that they were ready to show their feminine side. When I did a corset dress, I saw that my girlfriends were starting to wear bras again after their mothers burned their bras in the 70s and that they wanted to be sexy [again, but] on their own terms. The only business where women are being paid better than men is modelling. Before that changes, we will not have true equality of the sexes. Let the men be regarded as sex objects!” 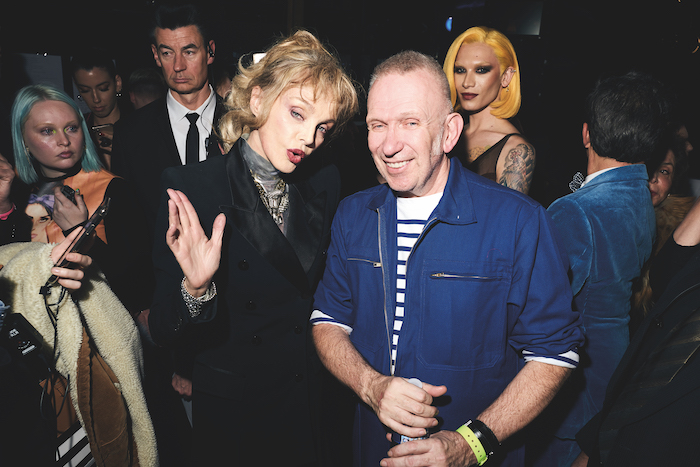 Whether subverting gender stereotypes or promoting the male form in shows like ‘L’Homme Objet / Boy Toy’, he has certainly showcased many hues of masculinity. In answer to the film And God Created Woman, starring Brigitte Bardot, Gaultier once devised a fashion show by the name of ‘Et Dieu Créa l’Homme’ (‘And God Created Man’). His designs for both genders have been unapologetically outside the box. From lavish stage costumes and tightly squeezed corset dresses to intentionally impractical statements of haute couture, his designs over the years have even included the brightly coloured feathers of scarlet Macaw parrots. And we would expect nothing less from the man who once saw fit to give live turkeys as Christmas presents, and who’d spent his schooldays surreptitiously sketching “showgirls in fishnets and feathers” in class.

Naturally his designs weren’t universally adored and he has endured his share of negative press – but he nonchalantly shrugs it all off. As dancer Dita Von Teese, one of his favourite muses and models, has argued, “the only thing safe from ridicule is mediocrity” – and that’s a philosophy he has carried with him throughout his career. 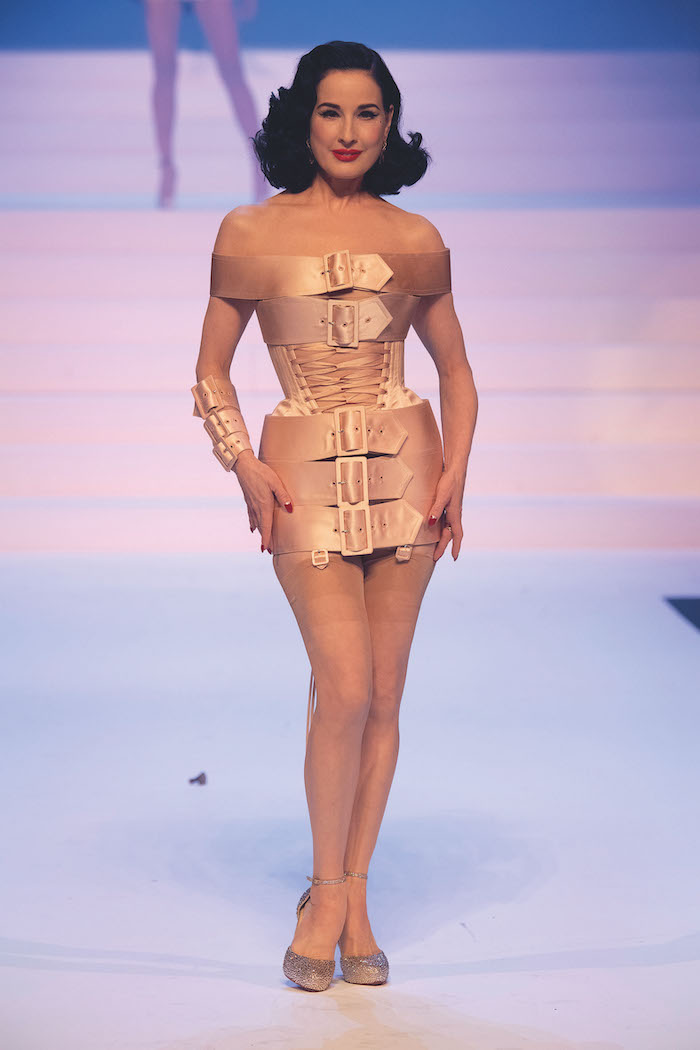 “I didn’t look at what others were saying about me,” he says. “Otherwise I wouldn’t have done what I did. Pierre Cardin, with whom I worked at the start of my career, taught me that the most important thing is to keep your freedom. I never believed in surveys or marketing studies, but did what I thought was right for the times.”

Clearly, having courage in his convictions paid off. It was his work with Cardin that first propelled him to greater heights in the industry, as a stint working at his Manila boutique led to him dressing Imelda Marcos, the First Lady of the Philippines.

Prior to that breakthrough, his jobs had been less than inspiring. On one occasion, he’d faked the death of his own grandmother to extricate himself early from the boredom of an unwanted job. When he told Maman Gaultier, there’d been a second of shocked silence. Then she’d turned and walked away. Were her actions a protest, a signature of her disdain and contempt? On the contrary – she was rushing off to put her best mourning clothes on, in preparation for collecting her son’s final pay cheque. 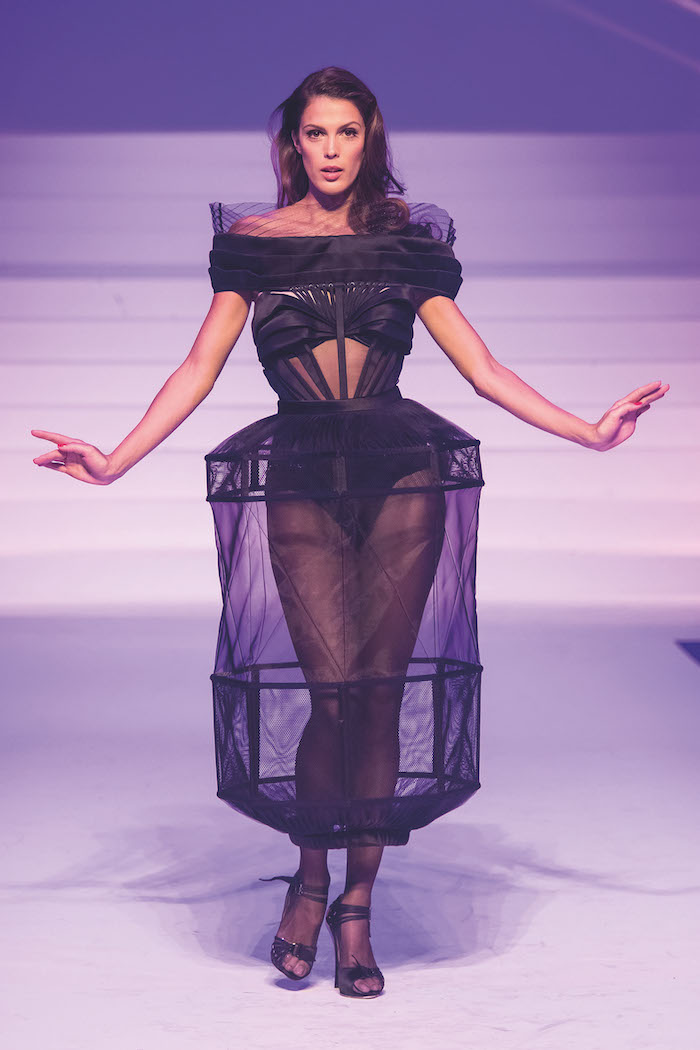 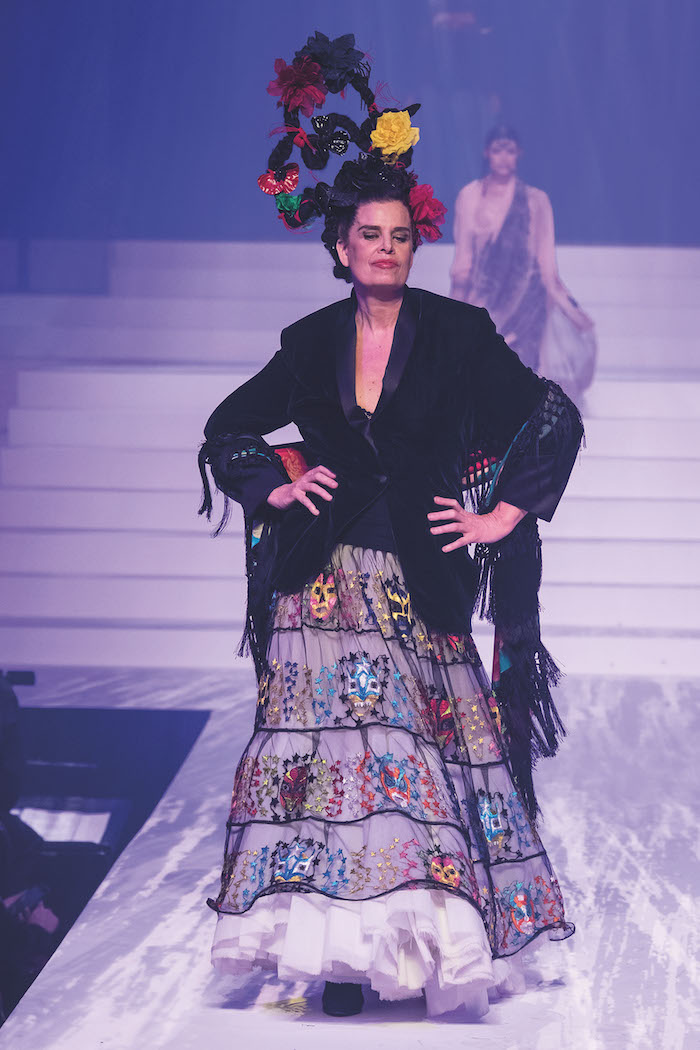 However the tide turned – and these days, the multi-millionaire fashionista can include Carla Bruni, singer, supermodel and ex-wife of former French President Nicolas Sarkozy, on his client list too. During Paris Fashion Week 2020, she was just one of many who proudly took to the stage for his last ever show. Beginning with a mournful group carrying coffins to symbolise the death of Gaultier’s career as we know it, and ending with the broadly grinning designer surfing his way through the crowd, it transformed from a sombre funeral to a raucous party in the space of just an hour.

A man of few words and many mysteries when it comes to his reasons for quitting the catwalk, he simply says, “Fifty years is a long time.” However he does eventually elaborate that “we will have to rethink the future for the fashion industry completely”.

How so? Disgusted by reports that Burberry burnt more than €28m worth of stock in a single year to protect the brand from theft – a waste that he condemns as “scandalous” – he subsequently decided to bow out of the industry. “There is too much of everything!” he exclaims. “Too many clothes and not enough people to wear them.” 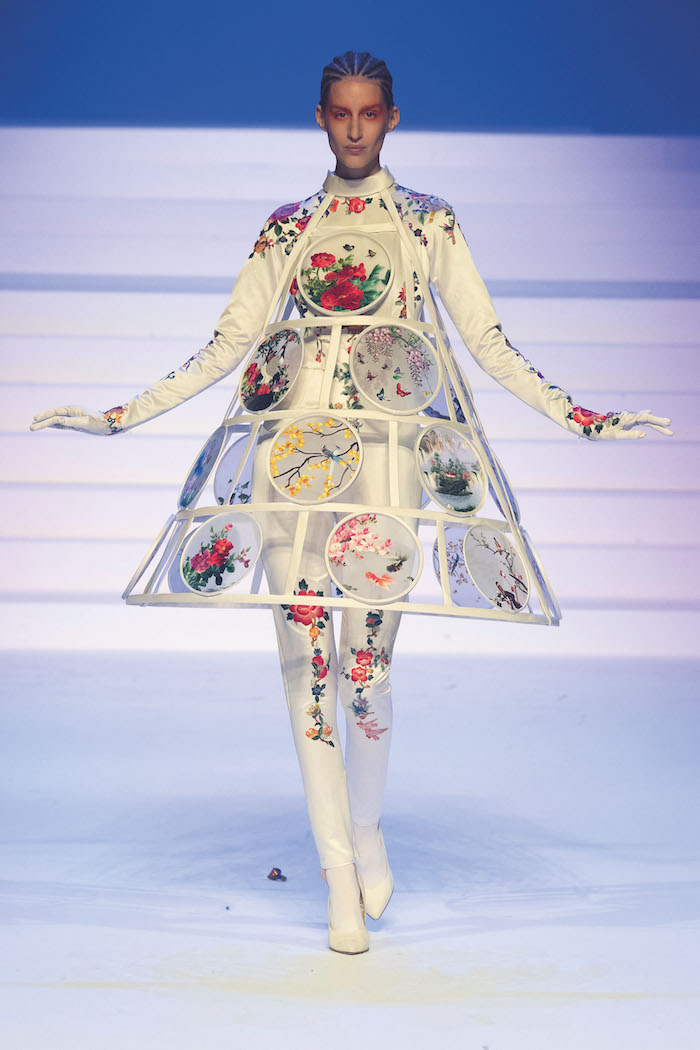 Ironically for a man who has spent decades showcasing so-called “disposable fashion”, via a 1980 line of dresses made from garbage bags, a 2015 collection for budget store Target and, of course, a 38-year stint creating ready-to-wear designs, he is now committed to sustainability. After initially switching exclusively to haute couture, he then declared the theme of his final show to be “recycling”. Now he is focusing not on environmentally perilous fast fashion, but high-quality investment pieces that stand the test of time – and those are the ones he intends to keep producing.

He may be stepping away from the catwalk but, he reassures us, “the brand continues with an exciting new concept for couture where I will choose a guest designer for each season.” His first collection will come courtesy of Chitose Abe of Japanese luxury brand Sacai. When it comes to additional collaborations, his lips are sealed, although he does profess a love for Anthony Vaccarello’s work for Yves Saint Laurent, Hedi Slimane and Rick Owens.

Regardless of who he collaborates with, Gaultier’s daring displays of diversity are likely to always embody the spirit of France, representing the libertine heart that he shares with his home country. Meanwhile, his message for 2021 and beyond is that, via sustainable buying, the legacy he built will last forever – long after he leaves the catwalk behind.