The Carrefours of France in San Francisco: The Legion of Honor, and Young Monet Too 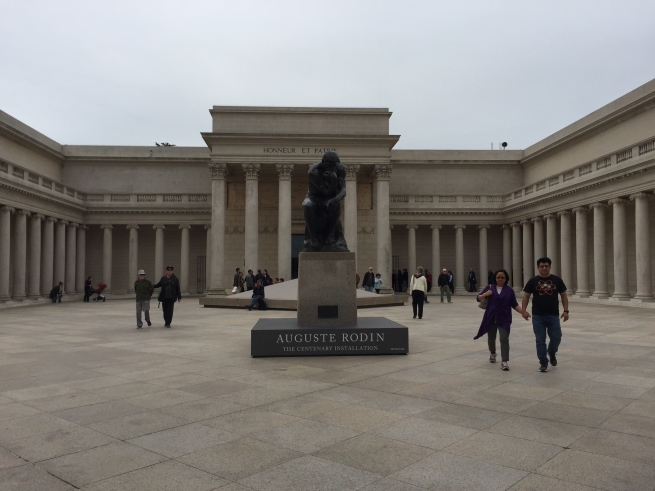 During the 1849-50s Gold Rush, many French came to San Francisco to find their fortune. It was San Francisco that grew rich with the addition of French culture, and that continuing influence is seen today from many intersections, or carrefours, in the city. This article is part of a series on French carrefours in San Francisco.

In 1915, the wife of sugar magnate Adolph B. Spreckels fell in love with the French Pavilion at San Francisco’s Panama Pacific International Exposition, which was a replica of the Palais de la Légion d’honneur in Paris. Not just because the building was a beautiful example of French architect Pierre Rousseau’s neoclassical work, but also because she needed a museum worthy of housing her 18th and 19th century French art collection, which included many Auguste Rodin sculptures. 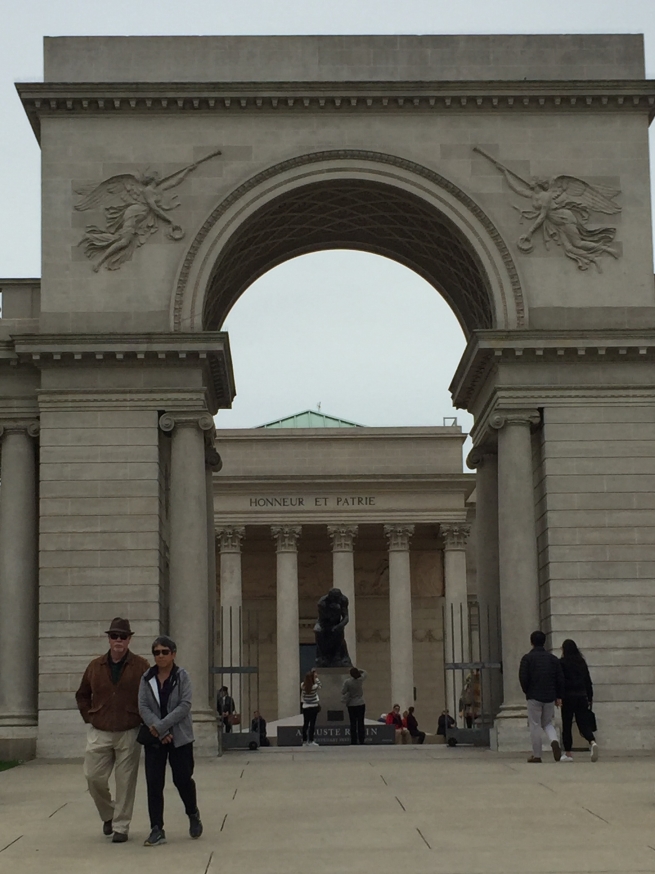 The French government granted San Francisco permission to construct the Legion d’honneur replica, but World War I delayed the groundbreaking until 1921. The location was on an elevated area known as Land’s End in Lincoln Park, next to the Pacific Ocean with tree-framed views of San Francisco and the Bay. This elegant site was the western terminus of the Lincoln Highway, the first modern road built for cars that crossed America. Thirteen years after the museum’s completion in 1924, the Golden Gate Bridge was built, which can be seen today from the grounds in all weather, even when Karl the Fog covers the bay.

The original Palais de la Légion d’honneur is a landmark on the left bank of the Seine, located at 64, Rue de Lille, next to the Musée d’Orsay, in the 7th arrondissement. It was built for the German Prince of Salm-Krybourg in 1788, and was called the Hôtel de Salm. He lived there only a year as his fortunes fell with the French Revolution. Eventually Napoleon consigned the palace in 1804 as the home of the Légion d’honneur, an order he created to reward civil and military merit.

The San Francisco building incorporated advanced construction for its time. Walls were built 21 inches thick with hollow tiles to keep temperatures even. The heating system eliminated ugly radiators, and filtered the air to remove dust. But even with a million pounds of reinforcing bar in the structure, the Legion underwent seismic strengthening in the 1990s, along with building system upgrades and restoration of architectural features.

Six-foot tall Alma Spreckels started with humble beginnings, but her father claimed lineage to French aristocracy. She married the sugar baron and became one of the richest women in America. While she may have had an outspoken manner, scandalous behavior, and a big personality that matched her height, she brought a lot of French art to San Francisco. She was one of Rodin’s patrons, and bought many French artists’ paintings. She was focused on building the Legion of Honor, and solicited gifts for it from collectors and foreign nations. She also raised money for war relief after each of the World Wars, Depression relief, and supported developing the art and culture of San Francisco.

In fact, the museum was accepted by San Francisco as a museum of fine arts dedicated to the memory of the 3,600 California men who lost their lives on the battlefields of France during World War I. A plaque by the entrance pledges to not forget “those who gave their lives that we might be free.” 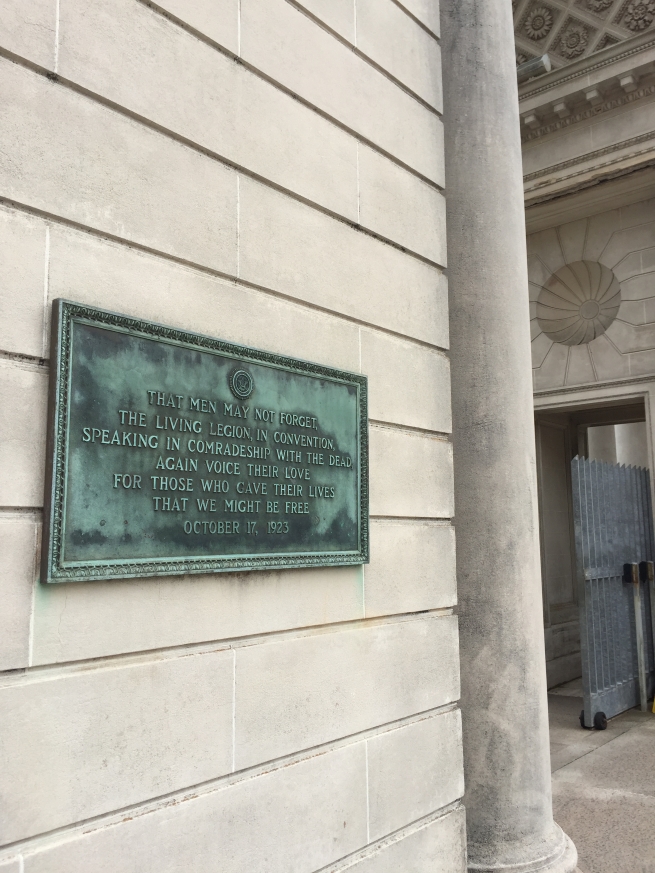 Visitors enter the San Francisco Legion of Honor through a tall arch with angels on each side. The interior court is lined with iconic columns topped with classic volutes or scrolls. But unlike in Paris, a statue of The Thinker, one of Rodin’s masterpieces, greets them. It’s fun to watch people pose for photos in front of the statue mimicking its position of both arms on the left knee, right arm bent upward with the wrist bent backward to support the chin. The pedestal is set up too high for a selfie, probably good thinking as it keeps the statue safe.

Inside are a variety of galleries that house Spreckel’s original collection of art, the largest portion being French, and includes a distinguished collection of Rodin sculpture, including The Kiss and The Gates of Hell, an unfinished masterpiece. Many donors have expanded the collection to include artists such as Rembrandt, El Greco, Rubens, Braque, Picasso, Robert Crumb, and many Impressionists and Post-Impressionists.

Speaking of Impressionists, the current exhibit is Monet: The Early Years, which examines the first fourteen years of Monet’s career when he was defining and refining his style. He grew up in the town of La Havre in Normandy where he took drawing and painting lessons. His teacher encouraged him to make a living out of painting, which was difficult. The path to success at the time was to have art accepted by Le Salon, the official, juried art exhibition of the Académie des Beaux-Arts in Paris. Buyers preferred nudes, religious subjects, heroic and patriotic deeds, not the en plein air landscapes Monet liked to paint. 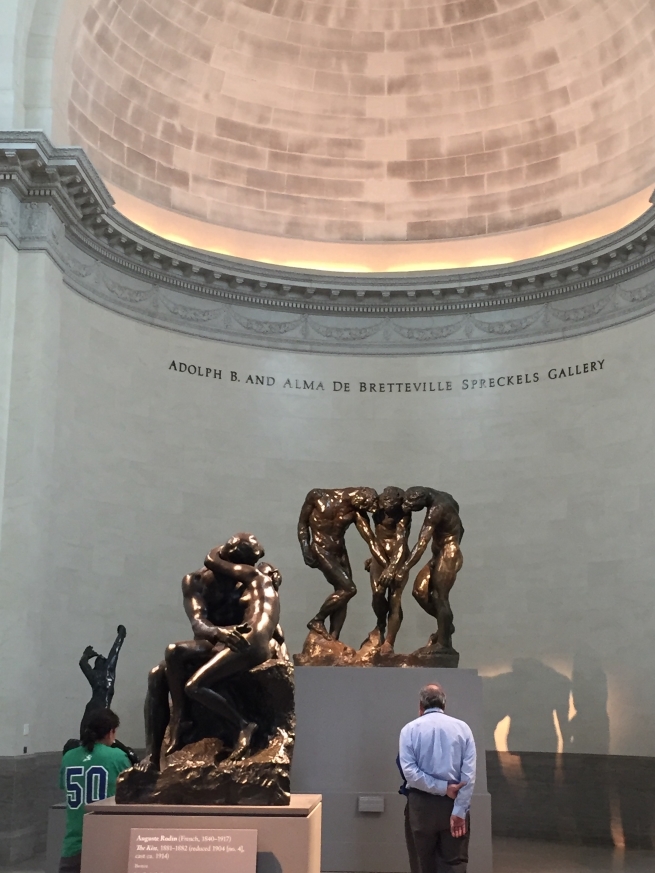 His first painting submitted to the salon, The Point de la Hève at Low Tide, was accepted, but it was a long stretch between the next accepted painting. During that time, he married and had children, so the pressures of supporting a family while being passionate about a career that broke the rules of painting were difficult.

The disruptor painted pictures that required the viewer to fill in the blanks. Color was applied in varied brushstrokes that evoked grass, leaves, changing skies, shadows, sunlight, movement and emotion. Undertones of color, such as the pink and blue in the snow scene The Magpie, reflected nuanced warmth. Topics were seasons, water, the sky, friends on the side of a river, Paris in the rain, his father reading a paper in a garden, paths along rivers, beaches, sunlight on a tree, and vast views of rolling hills and parks. 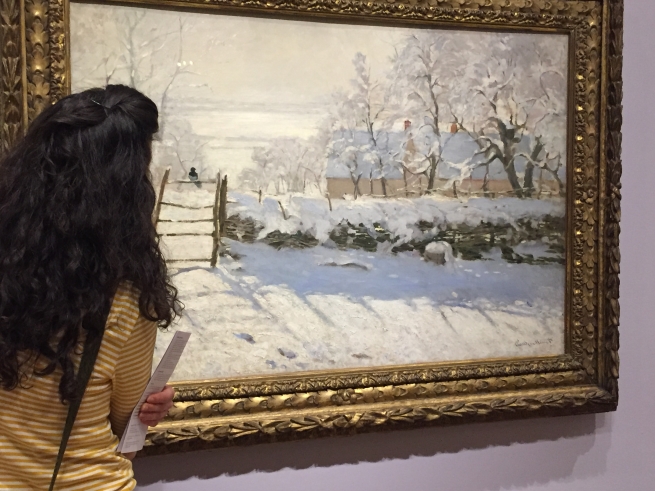 In 1874, he submitted a painting to Le Salon with a hazy view of the Havre harbor with a bright orange sunrise. According to Monet, “They asked me the title for the catalogue; it could not pass for a view of Le Havre, so I replied: ‘Put Impression.’” Thus Impressionism as a category was begun, and Monet drove the industry and became a successful artist. 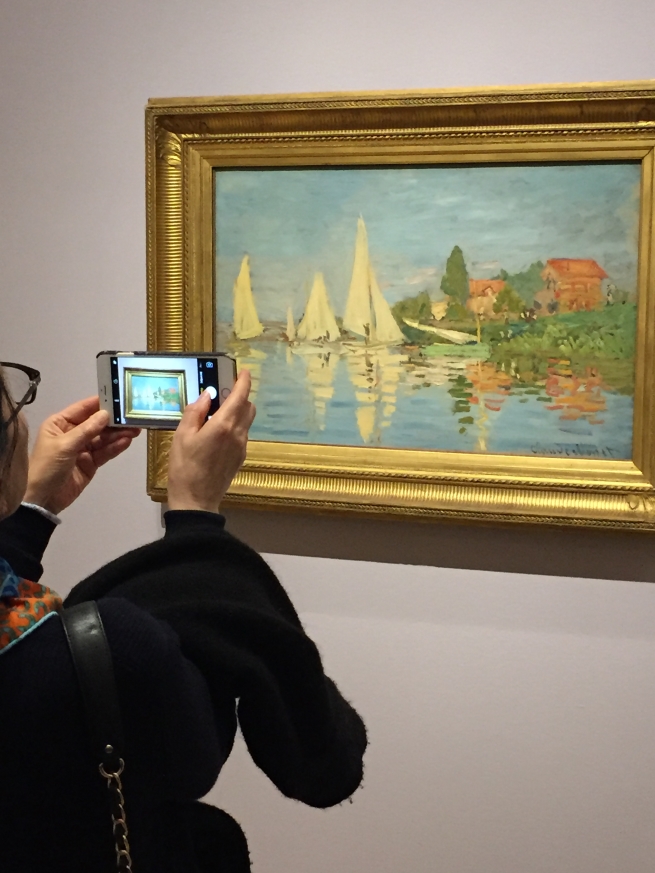 The Legion of Honor is an elegant reminder that San Francisco and France have a connection through art, artists and architecture. It is also a connection with people who love strolling through the museum grounds with their friends, family, loved ones, and even their dogs. Its setting can’t help but open your thoughts –inspired by Greek columns, views of the Bay and skyscraper construction changing San Francisco’s horizon, plus a bronze man with his chin on his hand, mulling over everything from world issues to where did I park the car?

Read more articles in the “Carrefours of France” series 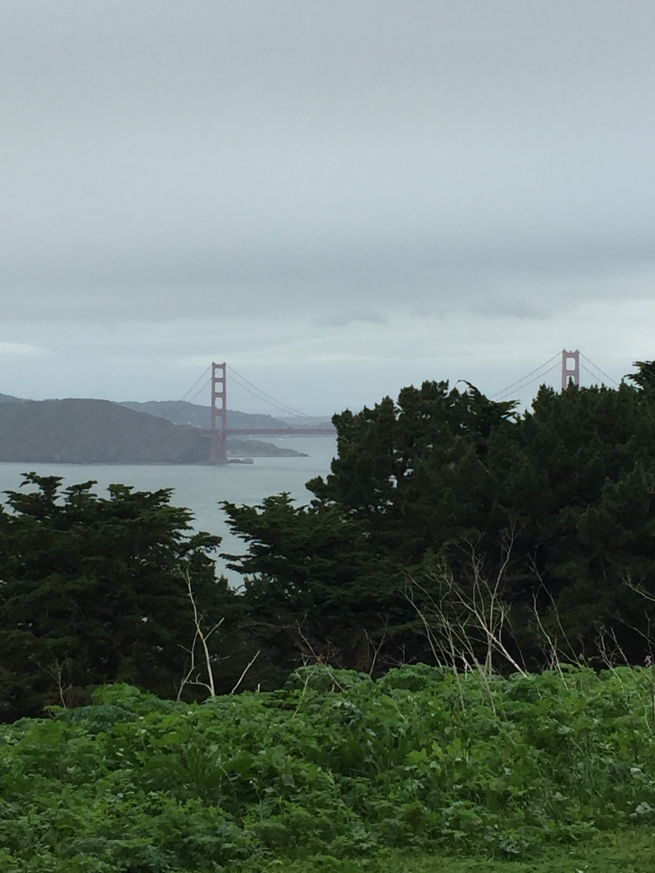 Previous Article Things to See and Do in Bordeaux: A Comprehensive Guide
Next Article The Train Stations of Paris, Reborn