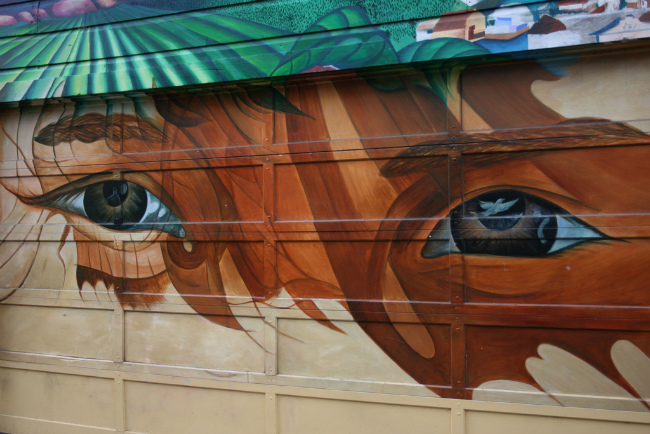 From early Indian settlements to the gold rush of high tech, San Francisco continues to attract writers and artists who tell its story through the faces of its citizens. Until February 11, 2018, French “photograffeur” and street artist, JR, will be on the streets of San Francisco interviewing and photographing residents in various neighbourhoods from the Tenderloin (a low-income area) to the Financial District, and places in between. You’ll know he is in the hood because of his huge truck with a photograph of an eyes-wide-open face checking out passersby.

Called The San Francisco Mural Project, JR will interview and take photographs of people inhabiting 25 neighbourhoods. Through these photo and video portraits displayed in mural format, the current story of San Francisco will be told.

“We are going to meet the inhabitants of each neighbourhood so they can tell the story of their San Francisco. What they like, what revolts them…,” said JR in an article in French Morning, an online newsletter for Francophiles/Francophones in the U.S. 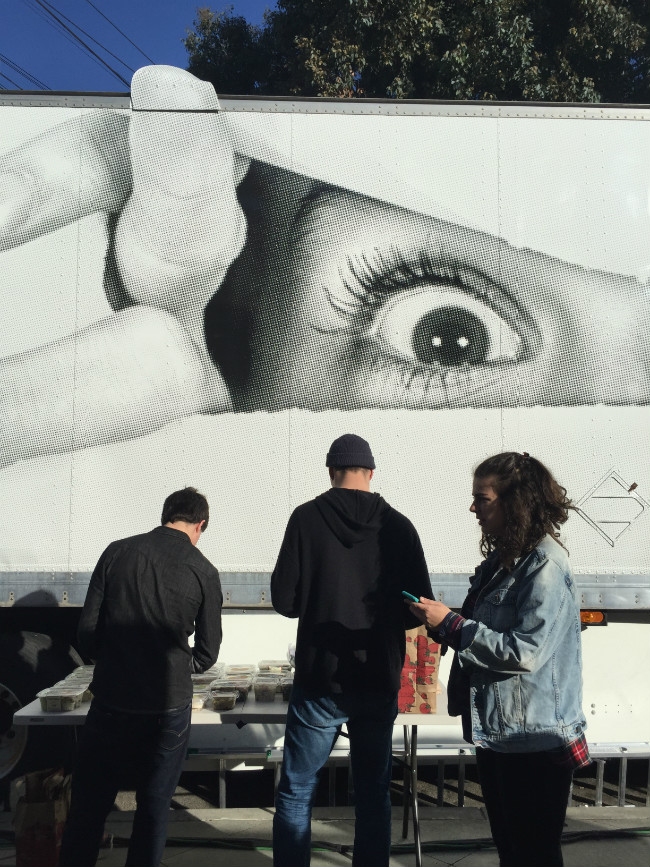 Beside JR’s truck photo studio, lunch is served for staff and those photographed. Photo: Martha Sessums

San Francisco has a long history of artists creating murals reflecting the city. From well-known artist Diego Rivera, to street artists that brighten up walls and corners, to Coit Tower with its murals that were the first of the New Deal federal employment program for artists, colourful murals tell the story of the city through the eyes of the artists and their subjects. JR’s mural will get up close and personal with its subjects.

The San Francisco Mural Project is Part Two of JR’s mural project started in 2017 in the Clichy-Montfermeil district, situated in greater Paris and the center of the 2005 riots in France. JR photographed over 750 people, from the mayor to rioters to shopkeepers to children. The result was a 36-meter long (118 feet) mural that was shown at the Palais de Tokyo in Paris. It is now permanently installed in Clichy-Montfermeil.

JR chose San Francisco for the second installment of his project “because here too, it’s a crisis…”, he told French Morning. Like many cities with increasing growth affecting housing costs, land usage and jobs, San Francisco struggles with supporting both its new high-tech boom and traditional population across many professions and classes. It is a struggle. 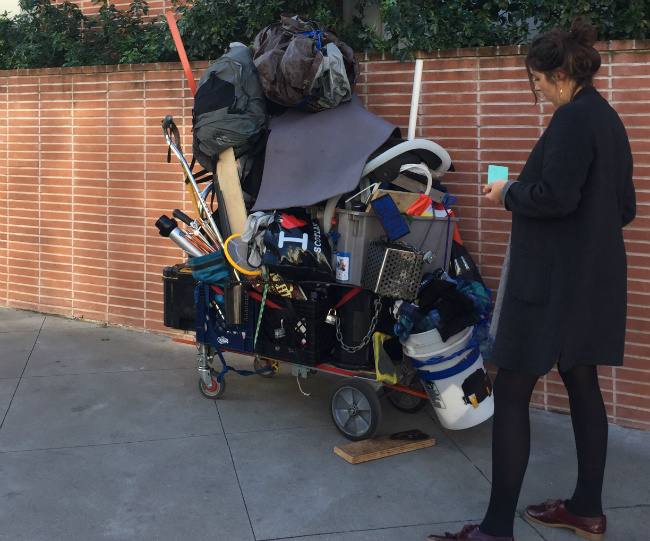 Homeless man’s cart of possessions waits on the sidewalk while the owner is being photographed in JR’s truck. Photo: Martha Sessums

When I witnessed the project in the Castro district, there was a homeless person’s cart full of plastic boxes and bags of possessions (clothes, plastic tubing, etc). He was inside the truck being photographed by JR. A man dressed in white from shoes to a cap pushed low to cover his face was being interviewed prior to his photo session. Passersby hung by the truck to find out what was going on while others took pictures. Some were waiting to be interviewed and photographed.

The corner was 18th street and Collingwood, a block from Castro Street, the heart of the gay district in San Francisco. It is a busy neighbourhood full of restaurants, cafes, boutiques and stores. On a sunny winter day, JR’s truck surrounded by orange pylons fit in with the bustle and energy of the location, but the face peering from the truck saw a neighbourhood struggling to serve all its members. 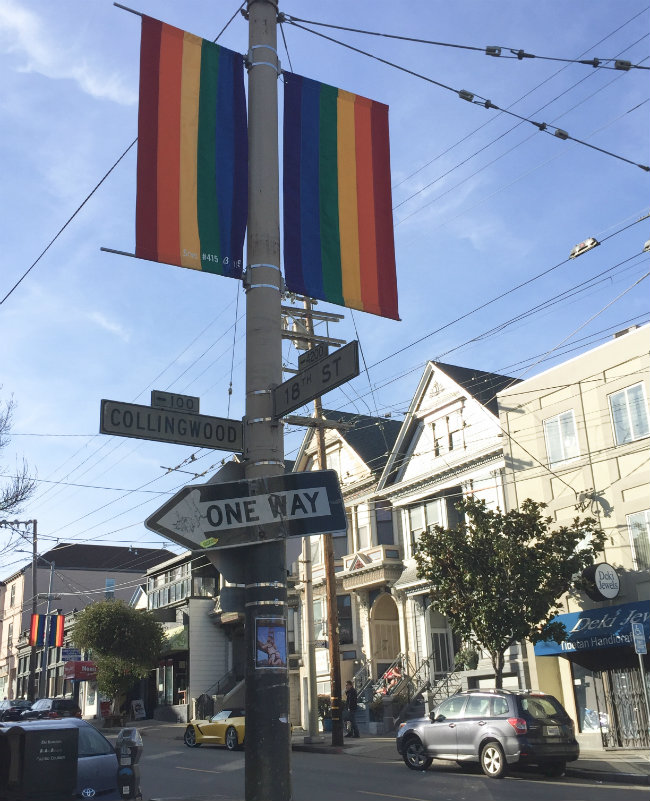 One person in the crowd was Emmanuel LeBrun-Damiens, Consul General of France in San Francisco. LeBrun-Damiens is supportive of the France/San Francisco connection in everything from business to the arts. He was meeting JR for the first time to welcome him to the city.

“JR is a very talented artist,” said LeBrun-Damiens. “From “Faces Places,” the documentary film made with Agnes Varda which is up for a Best Documentary Oscar, to his work here, which attracts a lot of attention from the population of San Francisco, this French photographer and street artist is an expert in human mosaics. We are very lucky to have him in San Francisco until February.” 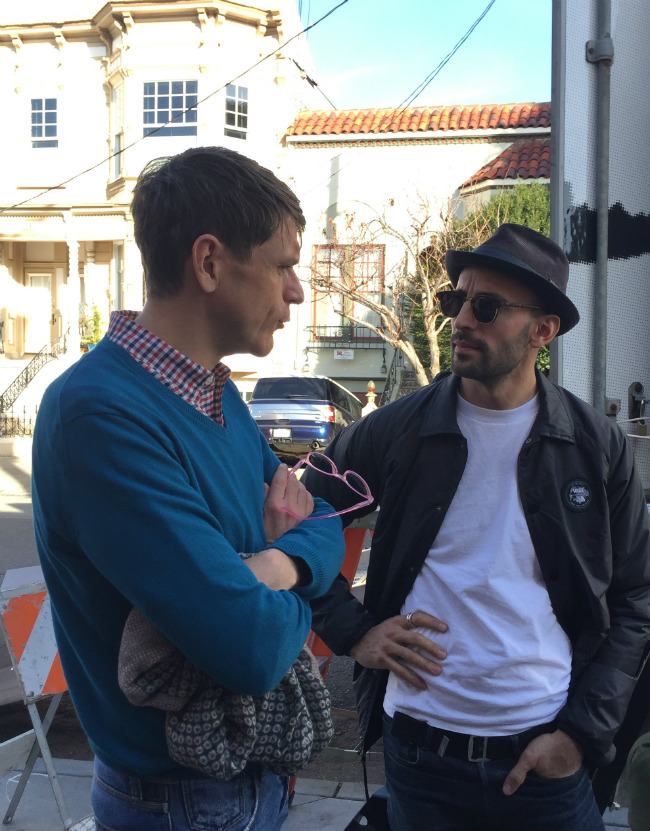 JR is an appropriate artist to help tell about struggle in “human mosaics.” His artwork is huge and powerful, and focuses on topics such as freedom, identity and limits. His first street art in 2004 was portraits of young people from housing projects that he pasted in the Paris streets. He is known for the giant portraits of Israelis and Palestinians facing each other in eight cities along the Separation Barrier in 2007. He also installed a photo of a sweet-faced Mexican child atop the border fence in California looking wide-eyed into the US. He won the TED Prize in 2011, allowing him to finance his photography projects around the world. 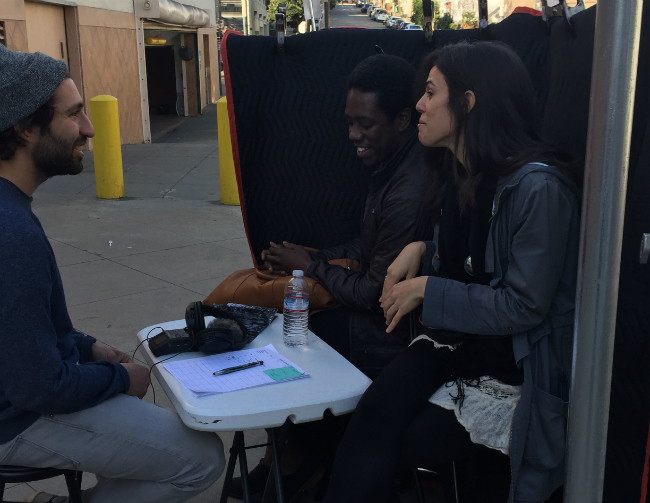 Residents of the Castro District are interviewed before their photo session with JR. Photo: Martha Sessums

After greeting LeBrun-Damiens, JR went back to work inside his truck. He climbed up the metal gangway to the blackout curtains covering the truck’s back entrance to await his next subjects. Up next – a hip looking mixed racial couple full of smiles during the video interview. No doubt JR will get their faces to tell their real story.

It will take six months of post-production before the mural of San Francisco will be ready for display. It is unknown where his mural the size of the one in Clichy-Montfermeil will be shown, but it will be unmissable. 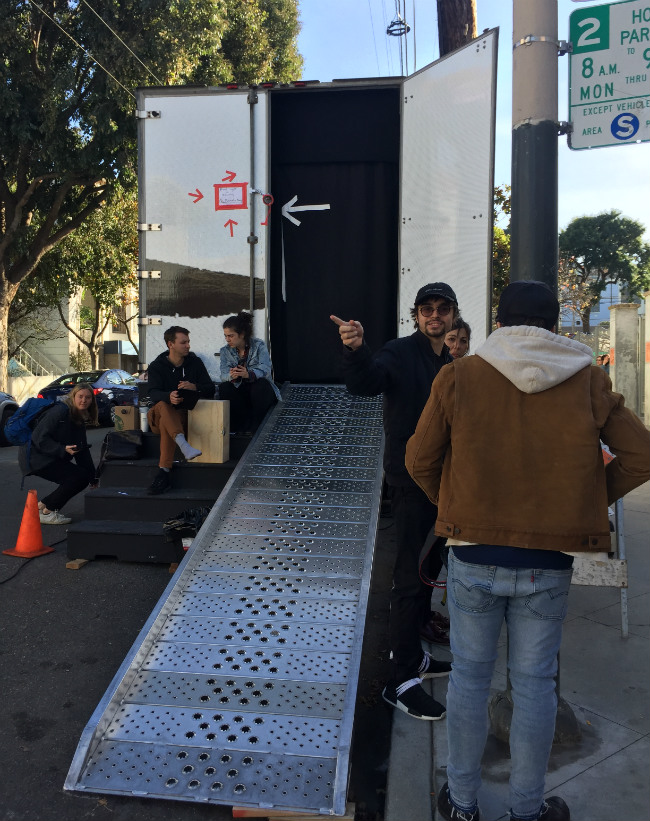 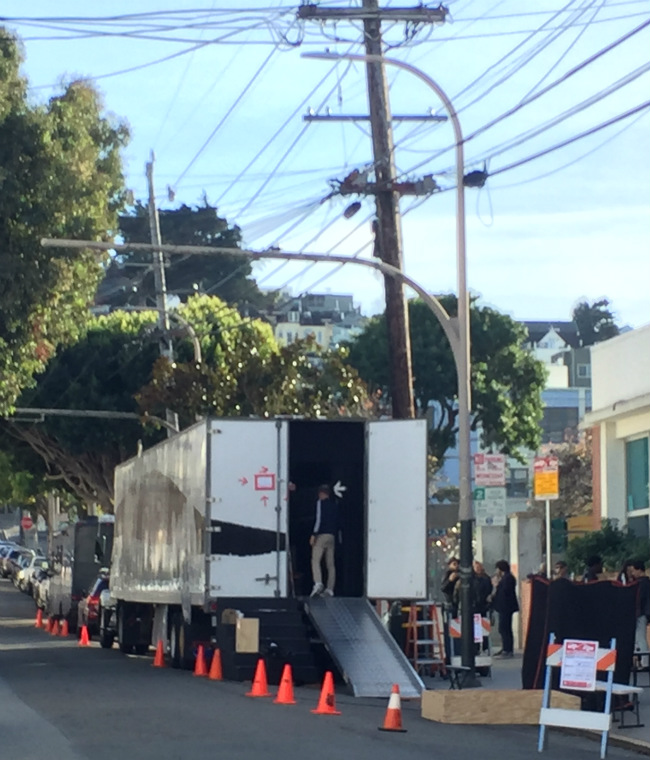 Previous Article Great Destinations: Beyond the Mountains in the Rhône-Alpes
Next Article Burgundy Restaurants: Relais Bernard Loiseau in Saulieu