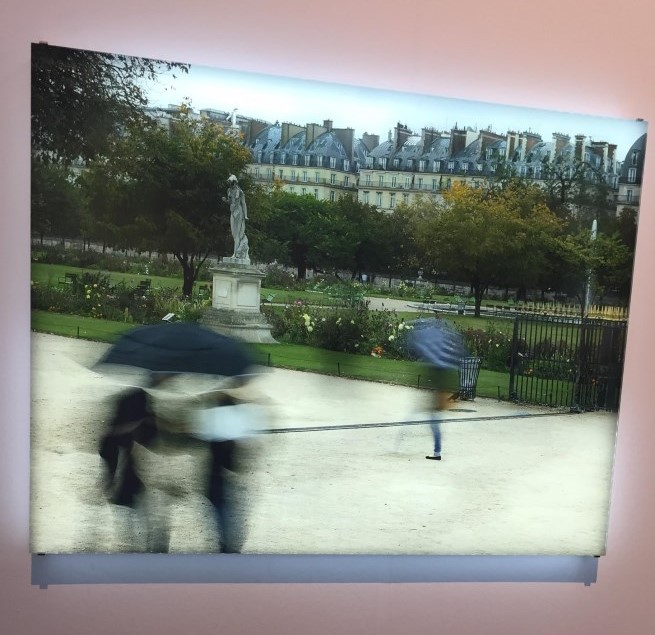 Looking at Henri Cartier-Bresson’s black and white photographs at the Leica Store Gallery exhibit, it’s clear that he put the “instant” in Instagram. There’s a man leaping into a water puddle the instant before his foot breaks the surface, capturing the smooth puddle’s perfect reflection of the jumper. Or a bike rider positioned between a wall and a stair railing that captures his speed. Or the wrinkled face of a Chinese Imperial Court Eunuch caught smiling. 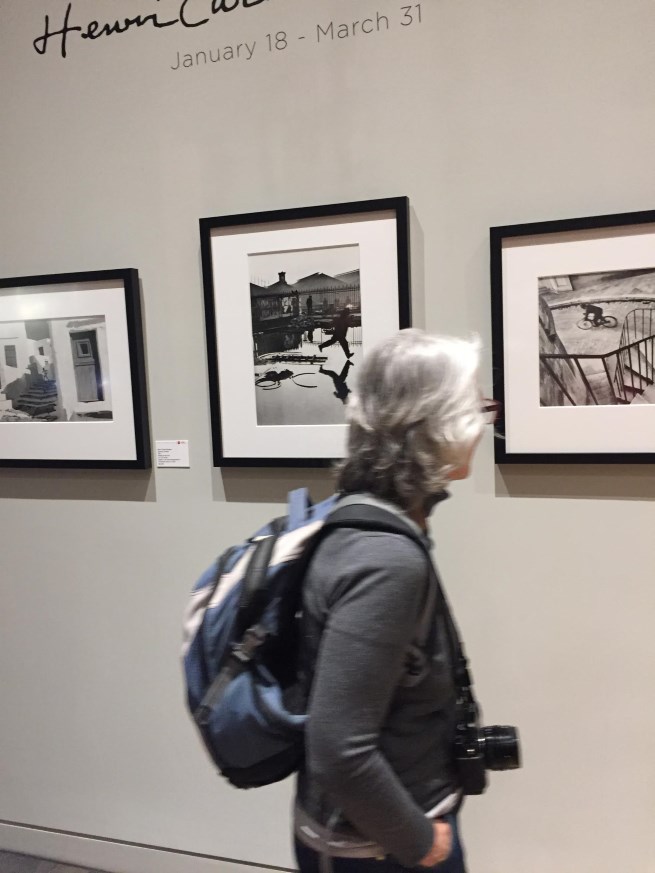 Cartier-Bresson is known for capturing the “decisive moment,” the instant that catches a scene with perfect composition and significance. His black and white photos are perfect gems of street photography that inspire other photographers who aim to capture the moment. Cartier-Bresson worked at it, sometimes going through whole rolls of film before he got his picture. But the crowd at the opening, or vernissage, of the Cartier-Bresson exhibit took smart phone photos of his black and white shots, even though many of the attendees had standard cameras slung over their shoulder. The gallery was full of modern day street photographers using phone cameras to capture moments. 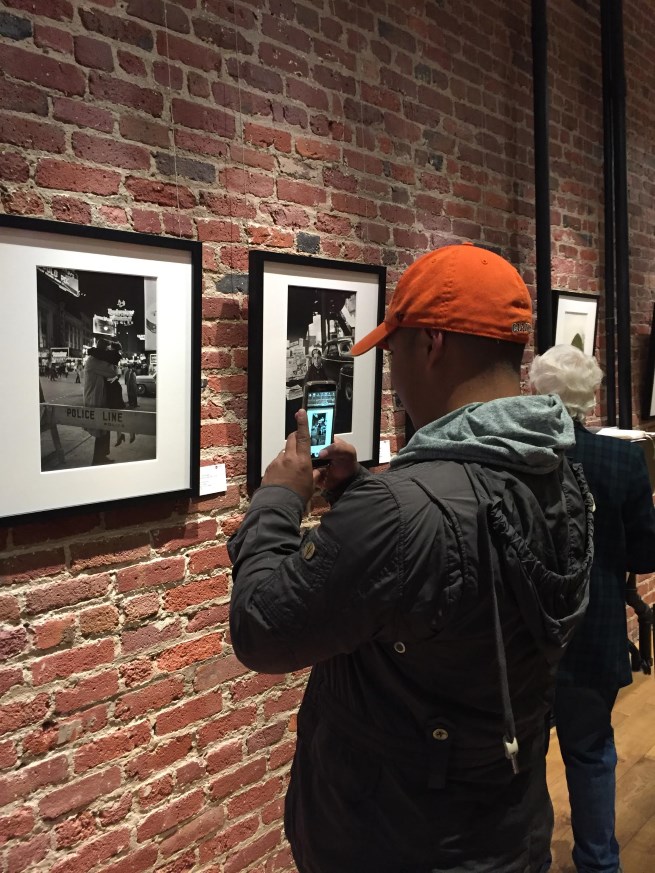 But serious street photography calls for more, Ramos continued. “It takes an eye and a good lens to capture the depth, layering and moment of life in an expertly composed scene. Cartier-Bresson trained to be a painter as a young man, and it shows in his photos.” 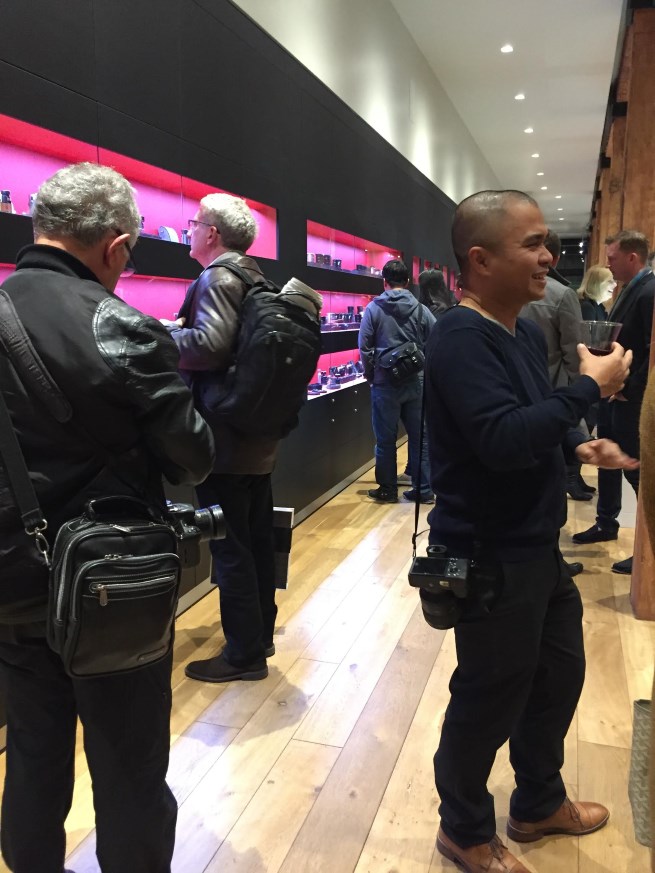 Lots of SLR cameras were at the exhibit. photo ©  Martha Sessums

Cartier-Bresson learned painting skills from cubist artist André Lhote, and was influenced by several surrealist artists. But he was given a Leica camera (thus the exhibit) as a teenager, and found that a hand held, compact camera could take a picture with spontaneity and anonymity. He was able to quickly capture street scenes and moments in people’s lives around the world with a push of a lever or button.

The Leica Store Gallery exhibit features over 50 gelatin silver prints of Cartier-Bresson’s photos from his travels across Europe, Mexico, China, Southeast Asia and the United States. His street photography is a combination of photojournalism covering historic events before and after WWII, and his picture perfect “decisive moments.” The show runs until March 31, 2017.

Across town at Fort Mason, next to the Bay overlooking the Golden Gate Bridge (always photogenic,) was the inaugural PhotoFairs San Francisco. The focus for the weekend fair was contemporary photographers who took their art to a new level. Here, it was not so much about the “decisive moment,” but about taking the media farther. 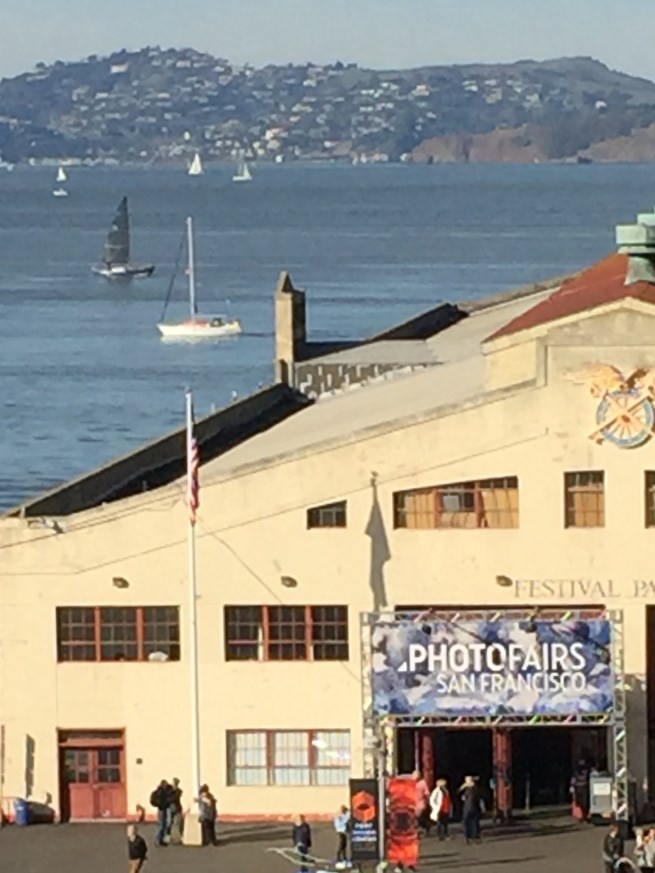 “It’s about breaking the boundaries of photography,” said Alexander Montague-Sparey, Founder and Director of PhotoFairs. “The artists reinterpret the canvas, reinterpret how photography is done and make it a playful game.”

This plays out in pieces like the French artistic duo Clark and Pougnaud, who combine photography, painting and studio models to create staged-scene photos. Pougnaud devises, creates and paints the stage set, and Clark photographs it. Separately, a studio model is photographed, and this photo is digitally inserted into the scene photo. This staged approach provides a strong painterly feel akin to Edward Hopper, René Magritte and surrealist painters. 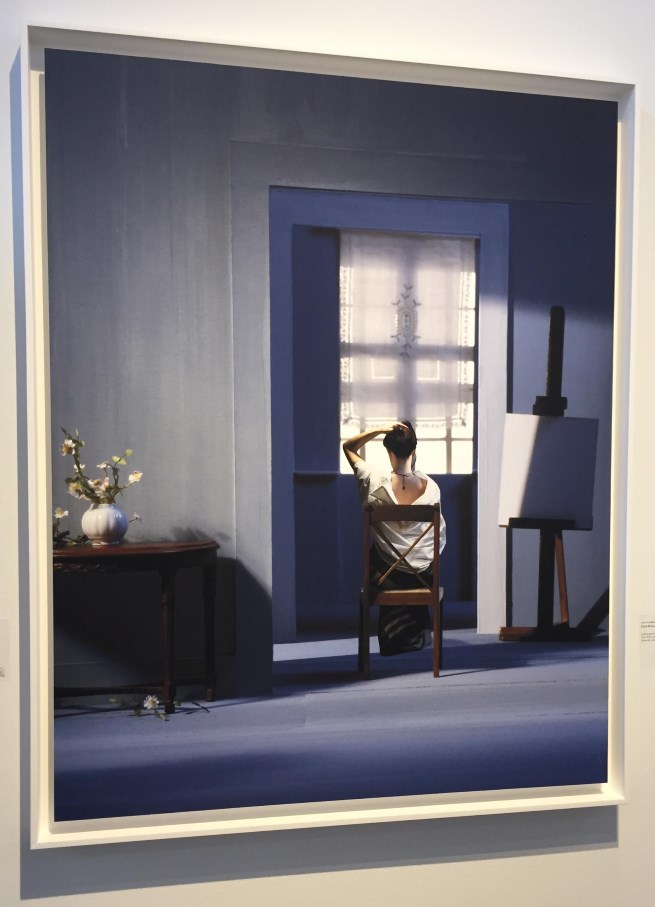 Jim Campbell takes a photo of the Tuileries Garden, exposes it on treated Plexiglas, and mounts this two inches above a panel filled with rows of tiny lights. The lights go on and off, so looking directly at the photograph it appears that there are shadowy people moving through the garden or going up and down steps carrying umbrellas. The lights are programmed to fool the eye by making a moving pattern, just like the San Francisco Bay Bridge light display, but on a smaller scale.

Film negatives of tree branches are cut in rectangles and mounted in rows on a canvas. A light above shines down on the negatives, creating shadows that develop a “photo” of a thicket of branches. It’s photographer Wang Ningde’s modern camera obscura, as the picture can only be seen when the viewer’s gaze T-bones with the light shining down on the canvas. 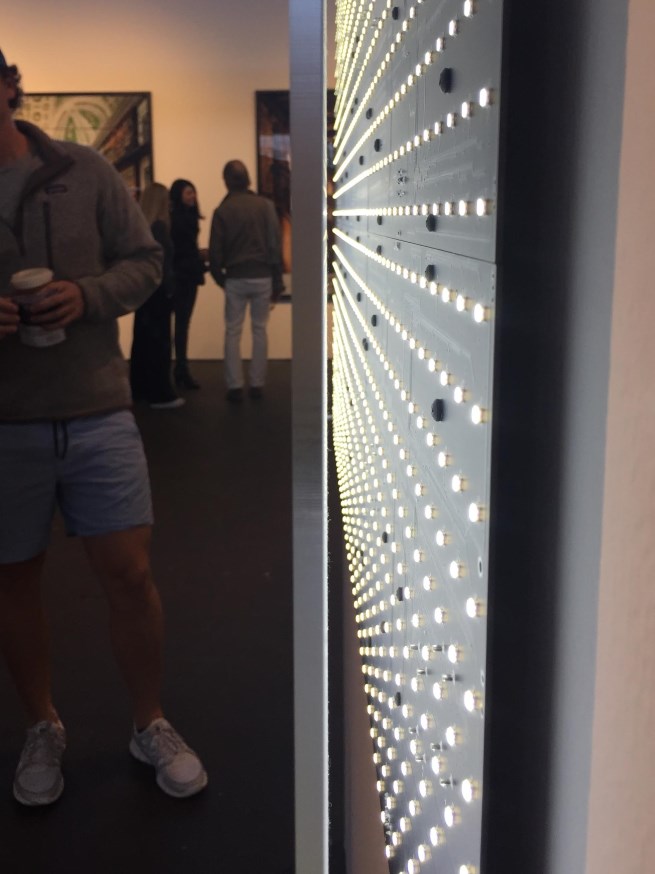 “Many contemporary photographers take the art one step further, to break the media down and add a physicality experience to it,” said Montague-Sparey.

French photographers and artists Denis Darzacq and Anna Lüneman took a photo of a man in a car and inserted colorful earthenware bowls in a circle around the driver. A photo of a woman in a white dress in a window-lit hallway was covered with loose threads. The result of Sissi Farasset’s embroidery was a texture and tactile feel unseen in a shiny photo. 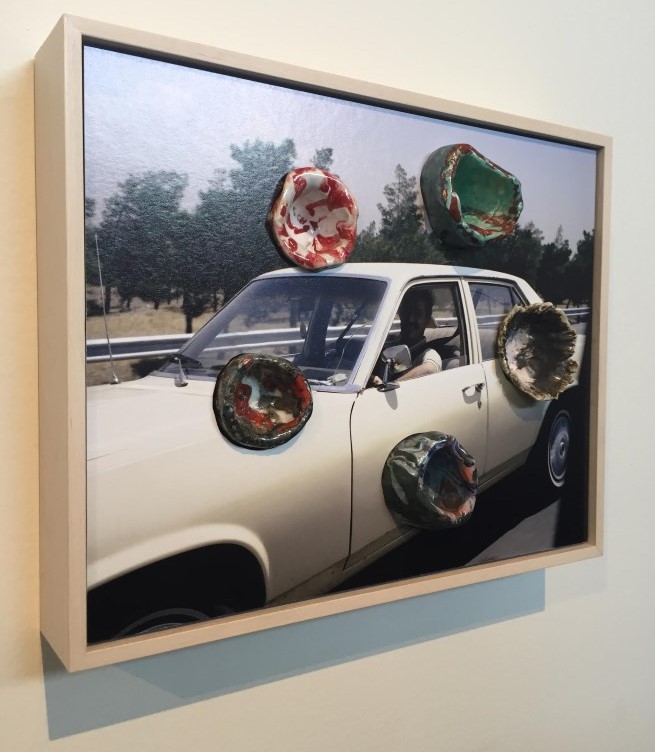 There were plenty of more traditional photos at the show too, along with French-based galleries. Magnum Photos had an exhibit (the photo agency that was founded by Cartier-Bresson and other partners) along with Photo12 Galerie in Paris and Santa Monica, CA, and Galerie Dumonteil in Paris, Shanghai and New York. PhotoFairs San Francisco showcased 55 galleries from 22 cities representing 15 countries.

But PhotoFairs must sell its exhibitors’ photography to be successful. The audience was diverse with collectors from around the world, along with the tech crowd that makes up San Francisco and Silicon Valley. 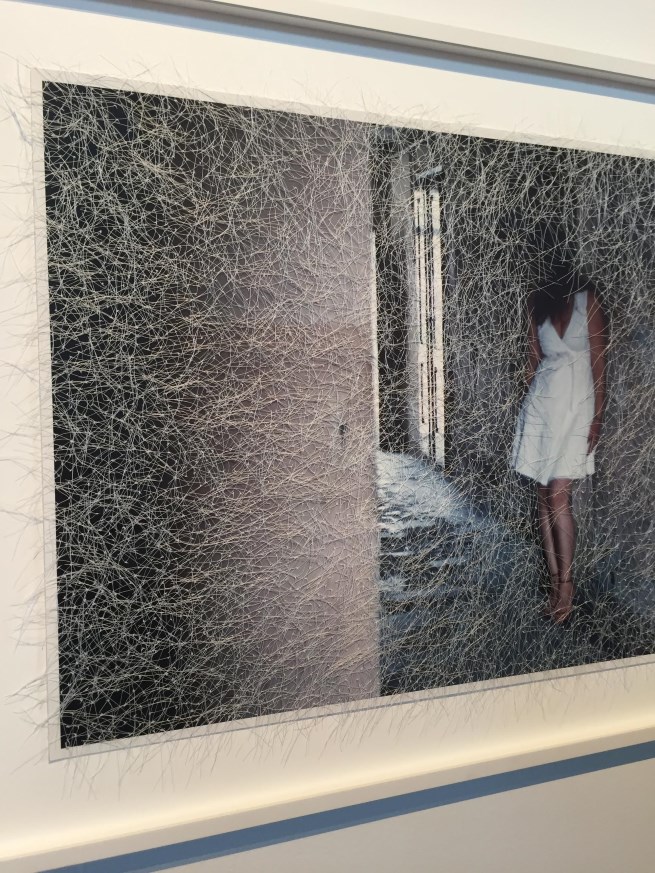 “We have collectors from Google, Instagram and Facebook at PhotoFairs San Francisco,” said Montague-Sparey. “Some of the tech audience is scared of the art world, but they are intrigued by this contemporary photography. It speaks to them.”

Previous Article Where to Stay and Eat in Champagne and the Ardennes
Next Article Reviewed: Ore, Alain Ducasse’s Restaurant at Versailles