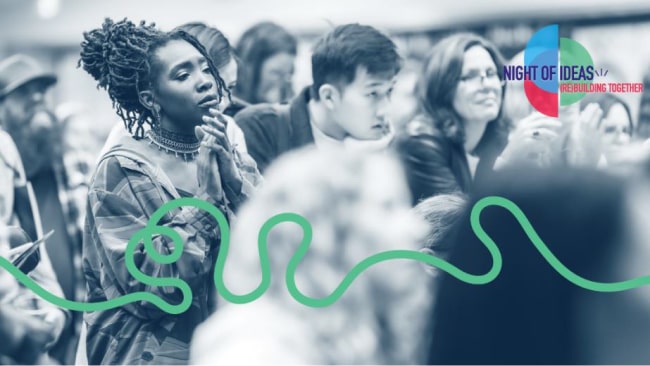 The international Night of Ideas is back this May with in-person events after last year’s pandemic shut-down, and no where will it be more celebrated than in San Francisco.

Coordinated worldwide by the Institut Français, participants this year are 19 cities (the largest number ever) and more than 100 countries. With the theme of (Re)building Together: Where Are We Going, the public will join leading thinkers, authors, film makers, activists and artists from their community to hold discussions and encourage inspiration for a path forward in today’s challenging world events. According to the Institut Français, these challenges include climate crisis, racial violence, current wars and the erosion of democracy.

San Francisco plans a Night of Ideas on May 17, 2022, starting at 6:30 PM at KQED radio and television station’s new theatre, The Commons, and will be streamed online. The evening will bring together local thinkers and the public to explore the Bay Area communities’ critical challenges with the goal to find hope in the future. Areas to be explored are the disruptions wrought by the global pandemic, dismantling the systems of oppression to meet today’s challenges, fortifying democracies and finding hope in the future for a brighter tomorrow.

“This year’s edition of Night of Ideas is especially important as we reconnect with our partners and communities, finally reunited in person,” said Frédéric Jung, Consul General of France in San Francisco. “Together we will spark a promising dialogue between France, the European Union and the United States by addressing some of the most pressing challenges of our times: democracy, freedom of speech and health. By innovating, (re)building together, using art as a visionary tool, we aim to contribute to paving the way to our common future.”

Those topics sound like a tough challenge but San Francisco is up for it. The evening of talks, art, music and community features a variety of researchers, authors, youth groups, scientists, innovation tech leaders and film makers. They include the following:

Bay Area youth have a great representation with Bay Area Theater Cypher which blends theatre, hip-hop and community and Mycelium Youth Network which is dedicated to equipping youth with the resources, training, and knowledge they will need to survive and thrive in a climate challenged world.

“We’re thrilled to host Night of Ideas in our new KQED headquarters,” said KQED President and CEO Michael Isip. “We’ve been honoured to collaborate on this event over the years in order to highlight the intellectual and cultural dynamism of the Bay Area in a uniquely entertaining way. The theme of ‘(re)building’ is particularly resonant for this moment and we look forward to bringing our community together in person so we can explore ideas and find common ground.”

Night of Ideas 2022 is the first major public event of Villa Albertine, a cultural institution across 10 U.S. cities. Its mission is to create international community through a shared exploration of arts and ideas. Launched in fall 2021, Villa Albertine coordinates more than 60 exploratory residencies and 15 professional programs annually and curates local and national events. Many of the Night of Ideas will have the local Alliance Française organisations as co-presenters.

San Francisco’s Night of Ideas is supported by the City and County of San Francisco, the Friends of the San Francisco Public Library, the Consulate General of France in San Francisco and the French American Cultural Society.

The Night of ideas is in 16 other U.S. cities including New York on May 21 which will have singer Patti Smith as a headline performer. The Night of Ideas in France Today’s other Ambassador cities are Los Angeles on May 9 and Washington, D.C. on May 11.

Previous Article French Cinema: Profile of Actress Léa Seydoux
Next Article In the Footsteps of Scott and Zelda Fitzgerald