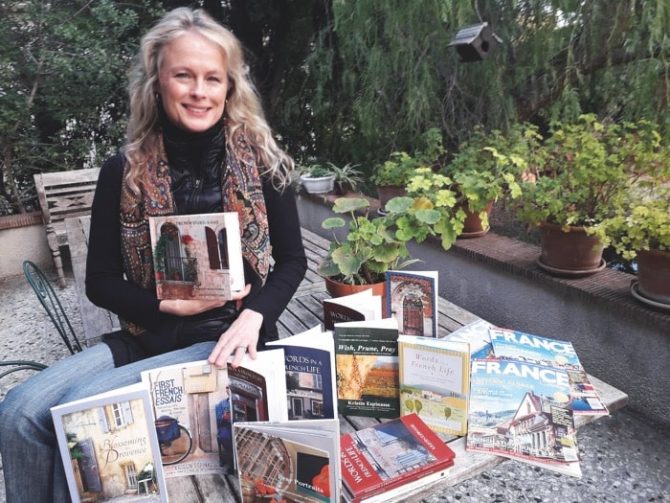 Right before the close of a gloomy 2020, I received some exciting news about a gold medal from the French government! The official notice came from the United States delegation of La Renaissance Française and was signed in ink by its president, Bernard Duhaime. The letterhead noted its previous présidente d’honneur, the late Madame Simone Veil of L’Académie Française, and highlighted the organisation’s historic background…

The body of the letter was in English (tant mieux! I did not want to misinterpret one single word!), and detailed the incredible news:

“You have been selected to receive La Médaille d’Or des Valeurs Francophones… due to your nearly 20 years of bringing French language and culture… to so many American families. Your meaningful and frequent communication with over 48,000 loyal readers is a perfect example of the furthering of French-American friendships that we so much appreciate…”


Waouh! I was at a loss for words: it felt absolutely exhilarating to be recognised. Validated. Awarded!

I remember back to uncertain beginnings when I started my website as a way to share my life in France with anyone willing to read about it. Given blogging was not well known at the time, my in-laws were doubtful about my new, all-consuming occupation.

At a family picnic, a French aunt remarked, “Un blob (sic)? Tu arrives à gagner deux sous avec ça?”. But “scraping together two pennies” wasn’t my mission! I dreamed of becoming a writer. Hélas, the reality was the stories I put up online were drifting in cyberspace. I clearly needed some sort of anchor.

The idea came for a regular chronicle called A Day in a French Life. I filled it with anecdotes on French culture and salt and peppered the essays with French vocabulary. To attract subscribers to my site, I dangled un appât, followed by un coucou and une godasse – that is, a word of the day to attract Francophiles. I published these vocabulary-infused billets seven days a week, kicking off my language journal with a newsletter to alert readers of new entries. French Word-A-Day was launched!

Even if my French family didn’t initially understand the “blob”, my readers wrote in regularly with genuine appreciation, and this spurred me on, especially when criticism began to trickle in (as it would with a growing internet audience, some of them inevitably trolls). Now, almost two decades – and one gold medal – later, I can ﬁnally show the doubters I’m legit! Dialing up my husband at his wine shop, I blurted out the news: “J’ai reçu un lettre du gouvernement français. Je vais recevoir un médaille! Il y aura un cérémonie à Washington DC!”

Jean-Marc was thrilled to hear about the award but warned I’d better clean up my act (and my accent) if I was to speak at une cérémonie and receive une médaille. Oups! Thanking my husband for his help, I’m reminded of the saying: Les cordonniers sont les plus mal chaussés – the shoemaker wears the worst shoes. Might this explain my unpolished French? Vraisemblablement!

PS: Fifteen years ago, in 2006 I began sharing these vocabulary-infused billets in France Today magazine. Thanks to this publication and to you, dear reader, I’m an ofﬁcial “columnist” (sounds a lot more digniﬁed than “blob-er”)! 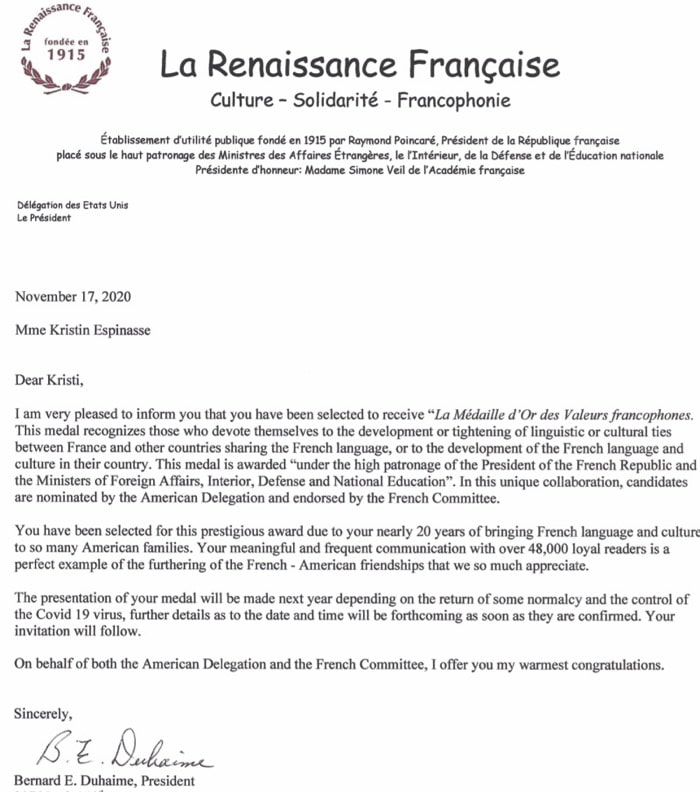 Previous Article On Écoute: Calogero
Next Article A Boating and Biking Tour in Northern Burgundy, the Land of Good Living