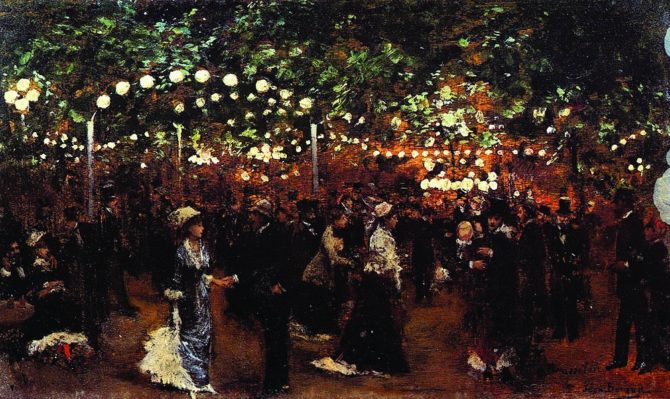 A sea of beaming faces streams out into the warm Paris evening. Two girls with vintage 1930s hairstyles waltz along under the street lights, laughing. In a gritty corner of north-east Paris, ‘B-boys’ in baseball caps hum under their breath, sparking each other’s cigarettes, and elderly couples wind their way homewards, arm-in-arm. Inside the cavernous venue, Le Centquatre-Paris, the band snap shut the cases holding their accordions and violins. A record 1,200 people had danced their hearts out at the monthly ‘bal populaire’, and Parisians of all ages and backgrounds are rediscovering this phenomenon, which is central to the city’s history.

“If you go to Buenos Aires, you expect to hear the tango, and today if you go to Paris, you can expect to hear musette” explains Florent Sepchat, accordionist with the band Le Balluche de la Saugrenue. He’s part of a new generation of young musicians who are remixing and reviving the typically Parisian bal populaire sound.

These dances in working-class neighbourhoods make a spirited comeback whenever Paris is silenced and stifled. And this reincarnation is no exception. Far from being just another media-hyped trend, the events’ euphoric atmosphere shows how much Parisians are feeling an urge to get together, reclaim their space and culture, and have some genuine, unbridled fun.

An Explosion of Light

When they first caught on in the mid-1800s, the very idea of un bal was a shock to the system. Paris could be a quiet, cold and dark place at the time – at night, even the wealthy would pick their way up shadowy staircases with a flickering candle, wrapped in thick housecoats and hats. The odd street singer or organ grinder was the only music many people would hear. Unsurprisingly, the very first balls, hosted by and for the aristocracy, seemed a veritable explosion of light. Chandeliers, lanterns and candelabras would dazzle the guests, the heat would set fans aflutter, and orchestras would fill the ballrooms with a richness of sound that many Parisians had never before experienced.

This excitement slowly filtered down the social classes, and various types of ‘bal public’ opened as commercial enterprises across Paris. Garlands of lights and raucous music would emulate the thrill of the aristocratic events, and they remain a staple of the bal populaire experience.

The music and dance of the bal populaire are inspired by two very different types of working-class ball: the racy, underground ‘bal musette’, and the leafy Sunday afternoon ‘guinguette’.

The back rooms of cafés and bistros in poor areas around the Bastille would fill with revellers enjoying the sound of the bagpipe-like musette, an instrument brought to Paris by immigrants from the Auvergne. Italians began to settle in the same area, bringing with them the accordion, which turned out to be a much more fun instrument to dance to. Compared to ballrooms, the spaces were so cramped that original dances began to emerge. Simpler, shorter steps, and closer contact brought about the ‘valse musette’, ‘tango musette’ and ‘java’.

The atmosphere of the bals musette were boisterous and seedy, and prostitution was endemic. The steps of the java were an ironic caricature of the relationship between a pimp and a ‘fille de joie’, with the woman’s arm twisted firmly behind her back. Aristocratic interlopers, bored with the strict social codes of their own events, would sneak into the bals musette for some tawdry excitement.

In contrast, open air cabarets called guinguettes were springing up in the countryside just outside Paris, where wine wasn’t subject to the city’s taxes. Along the tree-lined banks of the Seine and Marne, boaters and families on day trips out of town, would stop for a drink and a dance by the water. The Impressionist masterpiece Bal du Moulin de la Galette of 1876 captures the dappled light and leisurely atmosphere of Renoir’s local guinguette in Montmartre which, at that time, was still a village surrounded by orchards and meadowland.

World War 1 put a sudden stop to all this merriment and dancing in public was banned. Four years of austerity, blackouts and an absence of able-bodied men created a pressure-cooker atmosphere in Paris. Happily, when the war ended, the city erupted into dance again. All it took was a street light and a gramophone or a busker with an accordion for the pavement, café or marketplace to fill with couples whirling around in celebration.

The sound of the accordion and musette was now firmly associated with Frenchness, and it stirred a much needed sense of national pride and togetherness across all social classes. After World War 1, an influx of foreigners – notably US ‘doughboys’ and later American civilians escaping Prohibition – brought with them such exciting new musical influences as swing and jazz. Musette was combined with jazz by the legendary Romani-French guitarist Django Reinhardt, to create the distinctively 1930s ‘manouche’ sound.

Again, the needle was lifted abruptly off the record with the outbreak of World War 2. The German occupation of Paris left its citizens with a deep sense of humiliation and mistrust. Parisians felt a desperate need to reclaim the city’s neighbourhoods, their heritage and some semblance of unity. After the Liberation, journalists wrote that a second “dansomanie réactionnelle” (“dance  mania reaction”) took hold of the city. While the music played and the couples danced, grievances could be suspended, good times remembered and hopes for the future in a new free world celebrated in unison. The hugely popular chanteuse Edith Piaf captured the public mood with songs such as Bal dans ma Rue, which romanticised the resilience of ordinary people.

The next generation of youngsters, coming of age in the 1960s, no longer wanted to listen to the accordion like their Dad, or dance with their granny in the street. ‘Les yéyés’ as they became known, after the refrain from The Beatles’ She Loves You, had their own radios, money and ideas. Youth culture and individualism engulfed the musical landscape and put an end to la danse à deux.

The bal populaire did survive, in watered-down form, as  part of the annual Bastille Day celebrations but its image became somewhat cheesy and old-fashioned. And it stayed that way for nearly five decades…

Paris’s world famous nightlife took a nosedive towards the end of the early ‘noughties’. Increasing property prices and widespread gentrification meant that local residents would no longer tolerate noise in their streets. Iconic bars and clubs closed, one after another, as they were unable to soundproof their venues according to new regulations. Those iconic venues that remained were painfully expensive, and their bouncers would shake their heads and turn away anyone who didn’t look young or trendy enough to enter. Le Monde even labelled Paris the “European capital of boredom” and it seemed that its citizens had nowhere to gather and escape the misery and uncertainty brought on by the global financial crisis.

In the late noughties, a woman named Mélina Sadi – who goes by the nom de plume of La Baronne de Paname – came to the rescue of Paris’s citizens.

With her scarlet lipstick, powder-white skin and black hair piled high in a pompadour, La Baronne is a picture of vintage Parisian elegance. She set up an association named Balapaname, to reacquaint Paris with its rich musical history and get ordinary people dancing in the streets once again.

“If you come to one of my bals, you will always be made to feel welcome, that’s a very important part of what I do,” she explains. “They are timeless. They are a place that exists outside of fashions and social codes, their function is for all kinds of people to meet and enjoy the pleasures of dancing together, like they used to.”

Whether she’s hosting a guinguette-style dance by the canal just outside Paris, or a soirée in a club after dark, La Baronne has managed to create a powerful atmosphere that Parisians have been craving for years. The new bal populaire is unpretentious, joyful, free of charge and genuinely mixed.

“I had elderly gentlemen teaching little rappers in baseball caps how to waltz,” she recalls. “They saw these old gents in their Sunday best, dancing by the canal with gorgeous girls on their arms, and wanted to see if it might  work for them. So it doesn’t matter if you don’t know how to dance, I can get someone to show you.”

One thing making it possible for very different people to dance together is the new sound that’s being created. Musicians are scouring flea markets and garage sales, dusting off lost musette records and exposing this rich treasure trove of undervalued working-class culture. But there is an awareness that in order for the bal populaire to survive, it can’t just be some kind of one-dimensional revival, where the same Edith Piaf and Django Reinhardt tunes are heard again and again, it has to sound fresh, relevant to modern times and keep evolving.

Florent Sepchat explains that his generation grew up listening to techno, reggae and rock, which his band mix with the musette styles: “Java-reggae works really well. It’s still in triple time, so people can dance a traditional waltz if they want, but the reggae beat frees others to make it up as they go along, and maybe even start inventing something new.”

Who to Listen to

Previous Article Where to Eat on the Champs-Élysées in Paris: Le 68 Guy Martin
Next Article Mirazur in Menton: One of the Côte d’Azur’s Best Restaurants