Mirazur in Menton: One of the Côte d’Azur’s Best Restaurants 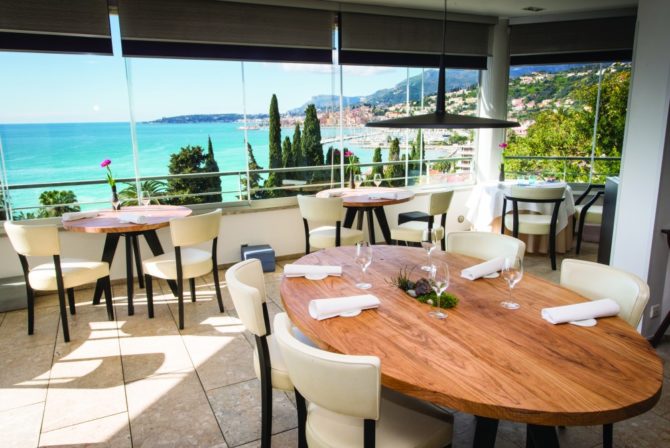 On the Riviera, many special-occasion restaurants – or those fancy pricier places you probably don’t go to very often – actually work best as infrequent pleasures. This is for the (politely whispered) reason that their cooking is so cerebral and ceremonial, you sometimes leave the table feeling, well, unfed. However, coming away unsated from a meal at chef Mauro Colagreco’s two-star restaurant, Mirazur, is something that just never ever happens and that’s just one of the reasons it’s my favourite upmarket table on the Côte d’Azur.

Another reason is something that I often think of as the Argentine factor – to wit, Colagreco was born in Buenos Aires, which explains, I think, the solid almost primal framework of his relentlessly inventive gastronomic imagination. Or in other words, this chef, who trained with Bernard Loiseau and Alain Ducasse before setting out on his own and taking over Mirazur in 2006, may be fascinated with new cooking techniques and evanescent constellations of taste and texture, but he’d never let you walk away hungry. As simultaneously bold yet delicate as Colagreco’s cooking often is, it’s also generous and earthy.

Treating myself to lunch here recently, the superbly well orchestrated meal debuted with delicate hors d’oeuvres like a clam in ‘tigre de tigre’, the umami-rich Peruvian sauce of liquefied fish, lemon, onion and ají used to make ceviche. It then waltzed between dishes that were coquettish – a tamarind-spiked bouillon of sea snails and courgettes, for example – and those which came to the table with more than a whiff of testosterone, like the  sublime final course of this meal, roast lamb with a racy sauce of fresh plums. And with wild mushrooms in season over the border in Italy – which is actually less than a couple of hundred metres away from the restaurant’s front door – and the last of the season’s local produce as his inspiration, autumn is a superb time to visit this restaurant.

Previous Article Le Bal Populaire: The Revival of Traditional Neighbourhood Dances in Paris
Next Article What’s On in Paris: West Side Story Ciné-Concert