Exclusive Excerpt: “Are We French Yet? Keith & Val’s Adventures in Provence” 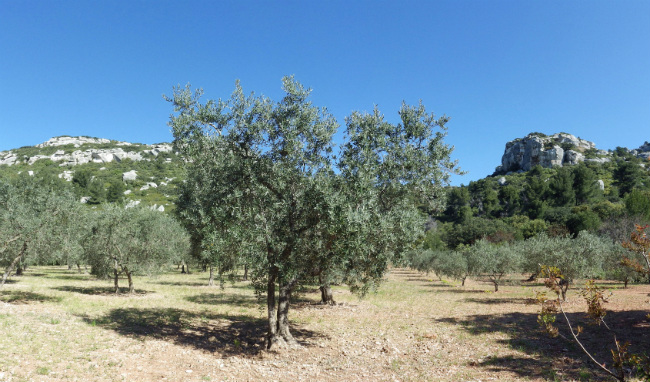 Editor’s note: Following his bestseller One Sip at a Time, Keith Van Sickle is back with another fun and amusing read. “Are We French Yet?” charts Val and Keith’s adventures as they quit their jobs and begin a part-time life in Provence. Can they fit in and become French? The below excerpt, Vive la France!, takes us to Guillaume’s house for what our narrator assumes will be a simple apéritif…

Val and I spend so much time in Provence that we’re often asked when we are going to buy a place there. And I have to admit, the idea is romantic. We sometimes imagine having a cute little maison in St-Rémy, with a view of the Alpilles and a boulangerie around the corner. But then reality intrudes.

I always seem to be fixing something in our house in California—a faucet springs a leak or the microwave goes on the fritz. I have to keep the gutters clean and the trees cut back. And sometimes there are big jobs like resealing the driveway or replacing the water heater. It’s no different from what any homeowner deals with, but when I think about having to do it for two houses that are thousands of miles apart, the romance of a home in Provence disappears.

Plus, Val and I don’t want to be tied to a particular house. While we’ve settled on St-Rémy as the town to stay in, it’s nice to be able to move around and try different places. And because we need a good-sized yard where our energetic dog can run, we usually find ourselves outside of town. Sometimes way outside, like our first place in St-Rémy. 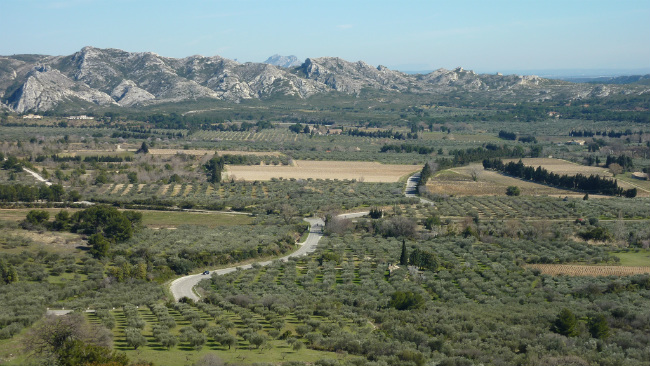 It was quiet, beautiful…and almost impossible to find because it was on a dirt road that didn’t even have a name. When we first went to check it out, we had to drive around for an hour before we found it. We passed one farmer four different times—he was trimming a tree and every time we went by he would look at us like he was thinking, “what are they doing way out here?” We even stopped a mailman, asking for directions, but he was as confused as we were. By dumb luck, we finally saw a tiny sign with the name of our place and an arrow showing us where to go.

The house was an old mas—a big Provençal farmhouse—built in the 1700s and beautifully cared for since. It had a huge yard, surrounded by a forest, and behind that you could see a single peak of the Alpilles. We came to think of that peak as our own personal Alpille. 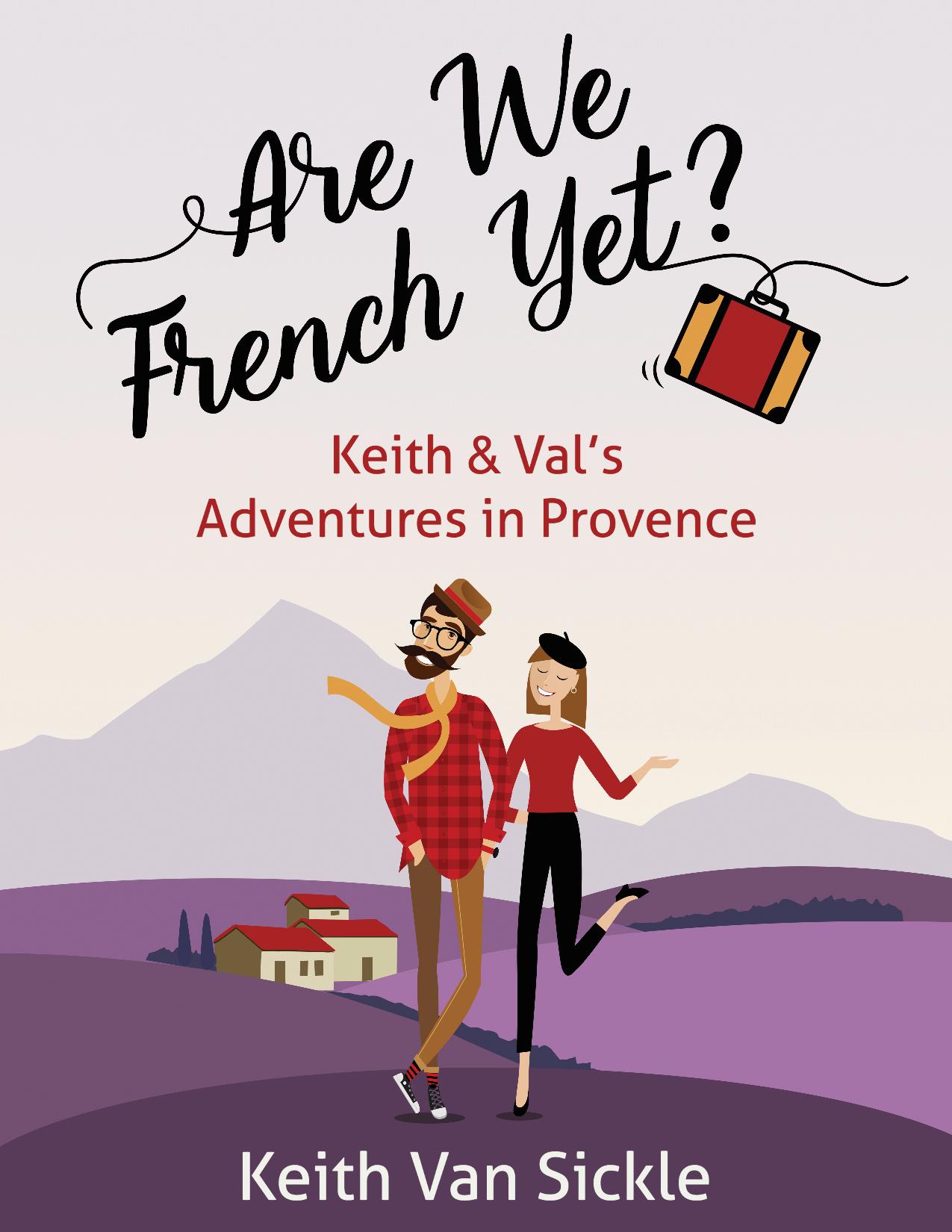 “Are We French Yet? Keith & Val’s Adventures in Provence”

The owner was an elderly lady we called Madame. She lived in a little apartment on the grounds, having moved out of the main house a few years earlier. The house still had many of her belongings, like the heavy, traditional furniture, lovingly cared for and passed down through the generations. Its dark wood had the kind of deep sheen that only comes from years of polishing. There were dishes galore, heavy plates with simple blue patterns on them, and a cabinet full of tablecloths made of fine linen. Copper pans hung around the stone fireplace. The place was spacious and serene, the nights silent except for the sound of trees creaking in the breeze.

And then there were the donkeys.

Madame loved donkeys. There were several that would show up from time to time, owned by neighbors so far away we couldn’t even see them, and they would trot into our yard and scare the dickens out of the dog. We could hear them coming because they were always braying excitedly, hoping for a handout. 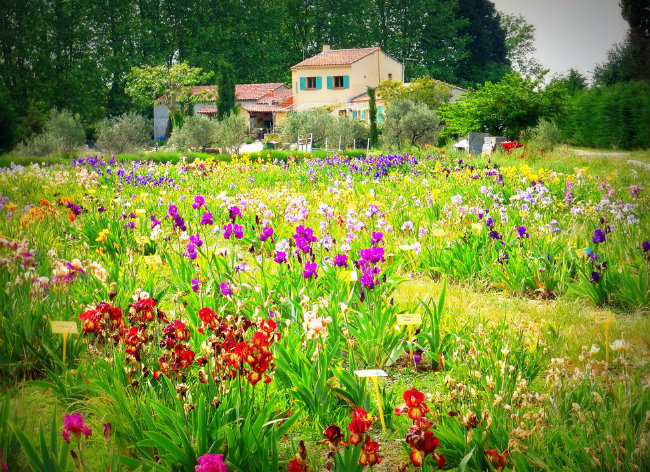 Madame, you see, collected stale bread for the donkeys from her favorite boulangerie. She would offer them baguettes, holding the long, skinny bread by one end while a donkey munched happily away on the other. Crunch crunch crunch. The donkeys were so well trained they would actually form a line and wait their turn. Crunch crunch crunch. After one had finished its baguette, Madame would shoo it off and feed the next.

This country home would have been perfect if not for the fact that it was so far outside of town. Our friends called it le coin perdu (the middle of nowhere) because they couldn’t find it on their own. Any time they visited, we had to meet at the tourist office and guide them back to our place. So the next year we decided to stay closer to town.

We found the perfect spot just off the main road into St-Rémy. It was another old mas, with two-foot-thick stone walls and a vast yard in two parts, upper and lower. When the owner, Guillaume, bought the place his plan had been to build a second home in the upper yard, but when he started to dig the foundation he found Roman artifacts. It’s forbidden to disturb such ancient remains so that was the end of the second home project, but it gave us an extra-large yard.

The property was right next to the Canal des Alpines, part of an irrigation system that feeds farms and vineyards throughout the region. Right outside our front gate was a waterfall where the canal’s waters crashed down to irrigate fields below. We could hear its gentle roar at all hours and it helped to block out noise from the road. 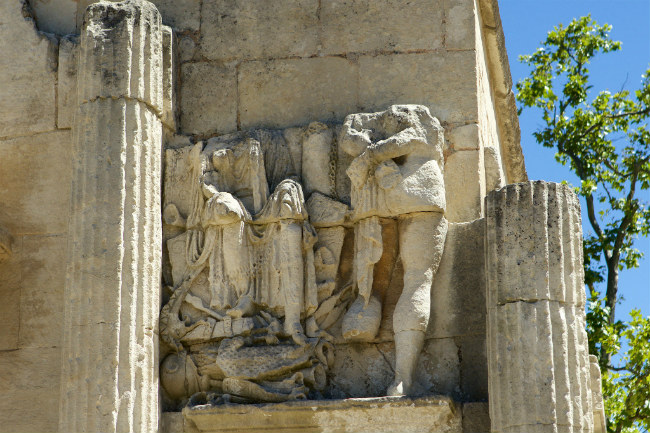 The sunny kitchen was our favorite room, with its giant, arched windows that reached almost to the high ceiling. There was nothing we liked better than starting the day in the kitchen, eating breakfast and gazing out at our yard and the vineyards beyond, looking forward to another day in Provence. Outside our front door was a large stone terrace where we ate our meals when the weather was warm, and next to that was a gravelly driveway that made a perfect court for pétanque, the popular local game that’s kind of like lawn bowling.

Guillaume stopped by once a week to take care of the property. He’s a stocky guy with a thick Provençal accent and an ever-present smile, one of those people you like right away. Every time he came he would stop to talk, chatting about the weather and asking us if the plumbing was working properly (the house was centuries old, after all). And he always seemed to bring a gift—one time it might be strawberries, another time asparagus. And then there was the meat.

“Sure,” I said. “There’s nothing better than a French ham sandwich.”

“Then I’ll bring you some ham from the butcher in Lamanon,” he said. “He’s the best in Provence and this ham will prove it!”

The next time I saw Guillaume he brought ham. And not just a slice or two, but nearly a pound—Guillaume doesn’t do anything halfway. 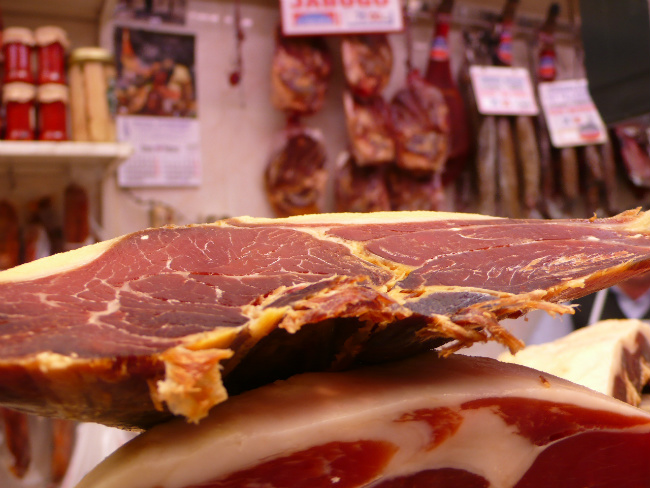 “Did you like it?” he asked eagerly the next time I saw him.

“Yes,” I replied, “it was delicious.” I didn’t have the heart to tell him we had only been able to eat about half of it.

“Then I’ll bring you some sausages,” he said. “They’re even better than the ham!”

A week later Guillaume showed up carrying two bags loaded with more sausages than we could eat possibly eat. They were tasty but…gosh, that was a lot of sausage. Luckily our friends like sausage, so every time we visited one we would bring a few along as a gift. “Here,” we’d say, “have some sausages!” It was a little odd but everyone appreciated them.

After the sausage it was muzzle salad. Guillaume wanted to be sure we tried it because it was the butcher’s specialty.

“What’s muzzle salad?” I asked. I like salads but hadn’t heard of this one, and was curious what kind of salad a butcher would make.

“It’s made from a muzzle, of course,” said Guillaume, “a pig’s muzzle. You know, its snout.”

So muzzle salad it was, which wasn’t as bad as it sounded, but we were glad when Guillaume went back to bringing us ham.

One day Guillaume invited us to his house for an aperitif. “Come by on Saturday at noon,” he said. “Christine and the kids would love to see you.” A midday apéro is usually just a glass of wine and some munchies, so we figured we would spend about an hour with Guillaume and his family and then be off. But we were wrong.

The first clue that this was not going to be a simple apéro was when we walked into the house and saw that it was full of people. Besides Guillaume and Christine and their kids, there was Christine’s mother Marianne and her father Maurice, Guillaume’s sister Janine, their friends Anne-Marie and Olivier, plus some kids from the neighborhood. I think word had gotten out that there were Americans coming over who sort of spoke French and everyone wanted to see this oddity, kind of like a three-headed cat. Or maybe they’d been watching old American movies and thought we would show up with cowboy hats and six shooters and do tricks with our lassoes.

The next clue that this was going to be more than a quick drink was when we saw the plates piled high with food, next to half a dozen bottles of wine and several homemade liqueurs. The grill was fired up and there were stacks of sausages at the ready. From the butcher in Lamanon, no doubt.

Val and I looked at each other. “I don’t think we’ll be leaving in a hour,” she whispered. 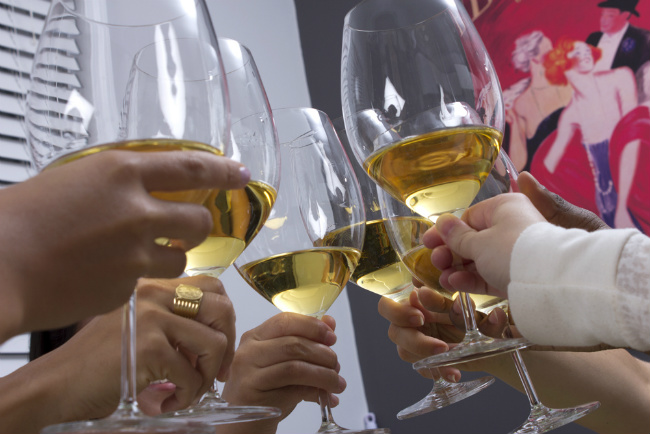 The whole afternoon was very relaxed and friendly. There had been a commemoration of D-Day the week before so everyone thanked us as Americans for liberating France. We all raised our glasses as they toasted us with a chorus of “Merci America!”

I returned the favor by thanking them for French support in our war of independence, raising my glass with a hearty “Vive la France!”

This went on for a while until I toasted them for French kissing and Val kicked me under the table.

My memories of the rest of the afternoon are fuzzy because all that wine kept my head buzzing for hours. But I certainly remember the laughter—these are people who have known each other for years and enjoy each other’s company. And they could not have been more welcoming to us. It reminded me of the line from the movie Casablanca, “I think this is the beginning of a beautiful friendship.”

And it was. Every year, we have lunches and dinners with the friends we made that day. Sometimes it’s at our place, sometimes at Guillaume and Christine’s, sometimes at Janine’s. Or maybe we’ll get together at Marianne and Maurice’s place or the home of Anne-Marie and Olivier. They’ve welcomed us into their world and we’re lucky to be able to share it with them.

Previous Article Women in Wine: Breaking the Glass Ceiling in France
Next Article My Life in Paris: Because She Cancan