My Life in Paris: Because She Cancan 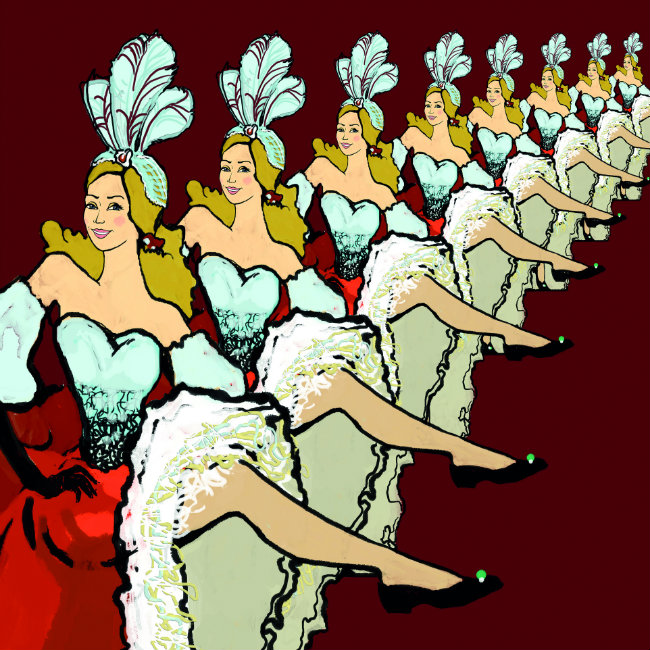 By now I know the drill. After presenting my press credentials, the security bouncers spin me down the Moulin Rouge’s red-carpeted ramp. At the bottom, I spot my guide and PR maven, Aurélia. I’m on a mission.

Anticipating the New Year, I’ve decided to make the leap all Daedalus-like, not only raising some spirits on my favourite stage, but also swooping through its in-house feather studio, nestled up in the attic. Since 1929, the Maison Février has been crafting tails and headdresses for all the dance hall movers and shakers in the city. According to Aurélia, the Moulin Rouge has its own costume atelier because, “Cock feathers hate the rain, especially the pink ones!”. It’s better to keep everything under one roof.

Photography is strictly forbidden here, especially backstage where the props are kept. “No self-portraits, please,” she tells me. I promise. How could I not? Then, suddenly, I hear the rumble of prancing feet down the spiral staircase. I’m thunderstruck as the entire dance troupe makes its way to rehearsal in layers of frothy petticoats. My own posture immediately straightens as my attitude makes a snap adjustment, revelling in the beauty of self-adornment and apparel. Under a thousand pink feather boas, I can’t help but press a reality pause and linger. Gazing at the dancers as they power push past all those rows of headdresses, I too feel empowered.

“Would you like to try one on?” Aurélia asks, reading my not-so-poker face. Would I?

Could I actually balance one of those 16kg headpieces on the top of my head, and somehow manage to slay it forward with some cheeky elbow grease to shimmy across those old boards, still dusted with bits of shockingly pink plumage, sequins, and glitter from the previous night’s performance? Why, yes I cancan, or so I think, and nod excitedly.

A dream come true. Feeling myself rise to the occasion, I peer out at the theatre, spying what I take to be the spirit of Henri de Toulouse-Lautrec flitting above the empty seats.

“Life is beautiful; here comes the French Cancan!” he’d shout, before each highly-charged show staged inside the Moulin Rouge’s pulsating walls. Built in 1889 by Charles Zidler and Joseph Oller, this jewel of the Montmartre ’hood still wears it well.

The crowd would rush the stage, forming a tight circle around the danseuses. Hemmed in by their aggressively-courted fan base – sometimes six-deep – the dancers sometimes performed the quadrille naturaliste, competing to see who could kick the highest without any pantaloons beneath their layers of petticoats, before climaxing with a final, exuberant high split in mid-air.

Here on the little Red Mill’s creaky wooden stage is also where famed terpsichorean Louise Weber made her debut. In Abbesses-Montmartre, she earned her moniker “La Goulue” (The Glutton) by distracting onlookers with her pantaloons and little pet goat while swiping drinks and chicken drumsticks from them and gobbling them down, never missing a beat.

“You know, with your bobbed hair and fringe, you almost look like one of our dancers,” Aurélia tells me. For a second I swell with pride, before she pops the bubble. “But sadly it’s not possible, because you’re not tall enough!”

Even so, I decide to embrace the transformative magic of garb and dreams the following day, buying palazzo trousers paired with pin-heeled pumps. Perfect for ringing in the New Year and elongating the silhouette – just in case one fine day I join the Lido or the Cirque d’Hiver Bouglione. A girl can scheme, can’t she?

And if that doesn’t work, I’ll just dance up a storm. After all, as Toulouse-Lautrec mused, “When you saw Louise dance, you forgot her sins”.

Sins and BHV purchases made during the Big Winter Sales – let this girl be a glutton for embellishment.

Previous Article Exclusive Excerpt: “Are We French Yet? Keith & Val’s Adventures in Provence”
Next Article Discover the Chateau de Fontainebleau, the House of Kings