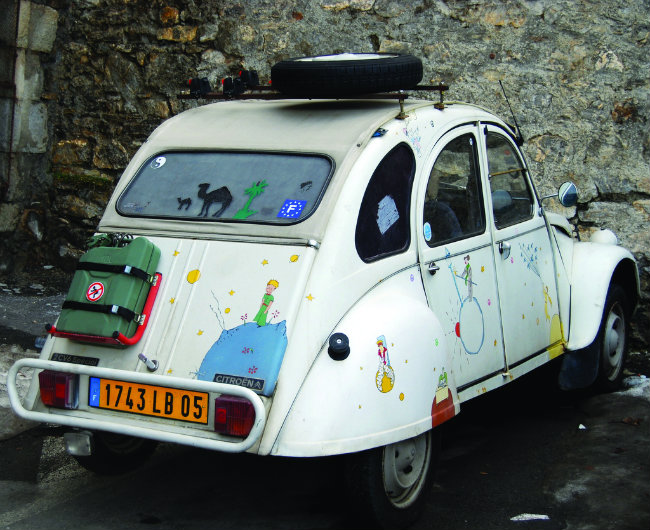 There I am, wandering aimlessly through an auto-parts store, killing time. I have come here to pick up a repaired pneu, but the man behind the counter has told me it’s not ready yet and has asked me if I would I like to patienter.

My eyes travel over to la salle d’attente, where a few rickety chairs and a stack of curdled car magazines are about as inviting as a baseball dugout. On second thoughts, I’ll roam the field…

Travelling up and down the aisles of the auto-parts store, I am quite unsure of what I am looking for. I begin to wonder whether this may be, after all, the store’s sales strategy: ‘When clueless woman comes to collect repaired item, indicate the “waiting room” (pointing out the hard chairs, coffee-cup-strewn floor and sticky motor magazines) and watch her run directly for the pricey auto-parts aisles!’

The ploy – if it is a ploy – works, and before I know it I am shopping for items that have never seen the doodled pages of my shopping list: car tattoos, escape hammers… and fuzzy dice.

Fuzzy dice! They have those here in France?! Suddenly I am transported out of a foreign land of auto parts and into a universal meeting ground. Though I have never owned a pair, I can somehow, in the vague recesses of my mind, relate to fuzzy dice, les dés en peluche. Is it an American thing? Or is it something kitsch like lava lamps and garden gnomes, which also exist in French homes and gardens? For several nostalgic minutes, I’m filled with fuzzy, dicey memories of times past, but in the end the ploy does not work – though I almost, just almost, buy one of those “head lights”: a battery-powered lamp on a headband (Is it for staring into the car’s engine? Or part of a survival strategy?) to go along with the escape, or “life”, hammer, which, by the way, doubles as seat-belt scissors in the event of entrapment!

Anyway, I might have purchased the headband-lamp-thingamajig (and used it to read in bed at night) had not one of the men behind the counter shouted “à vous, madame”. Turns out my tyre is ready!

Returning the fuzzy dés to the shelf, I turn my attention to the salesmen behind the counter and smile triumphantly. If theirs was some sort of impulse-buying ploy, well then it’s no dice, mes gars!

patienter = to wait a moment