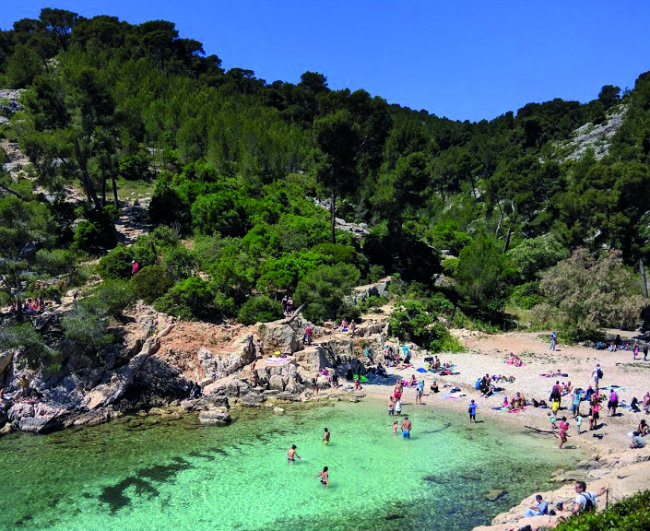 Thanks to her hubby, fish-out-of-water Kristin Espinasse rediscovers the joys of swimming

As a child growing up in the Arizona desert I never missed an opportunity to swim. A broken limb could not keep me out of the neighbourhood pool, where I glided beneath the surface like a shark. Only my plastered arm appeared above water. That fin was the envy of all the kids!

When I was 26, I married a Frenchman who also loved to swim. Ever since our wedding reception at Le Cercle des Nageurs de Marseille – and for as long as I have known him – Jean-Marc has never missed an occasion to dive in and explore the Mediterranean.

Though he still calls me his sirène, the desire to swim left me years ago. Perhaps it was those first few steps into the frigid sea that had me turning around, unwilling to venture farther. Or a resistance to put on a swimsuit at the beginning of the season, when my skin is at its fairest and my waistline at its widest after too many cosy and delicious winter nights.

All this nonsense changed last year when we faced the possibility of moving from the coast of France… to America’s hinterland. One day my husband asked, as he always did, if I’d like to join him for his evening swim. No longer taking our proximity to the waterfront for granted, I said, “OUI!” We swam together the rest of that summer and have rarely, since, missed a chance to prendre un bain. We even decided to move to La Ciotat, near the beach, instead of Denver!

Whenever I am hesitant to step into the chilly waters (or into my bathing suit) I think about the many benefits of l’eau de mer – from a better night’s sleep to softer skin, reduced inflammation, and one’s daily dose of magnesium.

Swimming with my husband, I’ve also begun to pay attention to his habits while revelling in the sea, and to note any corresponding qualities…

One of my merman’s first reflexes is to snort salt water, then swiftly blow it back out. “Ça nettoie!” he burbles, amused by my reaction. “Tu devrais essayer,” he smiles, disappearing beneath the water to swim a bit farther down the coast. Settling into a rock-pool, he collects seaweed to scrub against his skin. “C’est moins cher que dans un centre de thalassothérapie,” says he.

Next, we race out to the bobbing yellow line where he loves to anchor his feet on either side of a buoy and oat like a giant cross in the sea – releasing all worry, doubt, and anxiety. Moments later he swims off. I am close enough behind to hear my husband point out one of nature’s many surprises. This time we marvel at a school of flying fish which are spraying out of the water just ahead of us.

As my merman swims back to the beach, he can’t resist the joy of plunging a few metres down to collect a sea urchin or two. “C’est un aphrodisiaque!” he says with a devilish look, offering to share the orange roe with me for lunch.

Swimming back to the shoreline, we encounter two septuagenarians. We turn to watch as the white-haired couple swim out past the yellow buoys and disappear down the coastline.

SIRÈNE = mermaid
PRENDRE UN BAIN = to have a dip
ÇA NETTOIE = it’s cleansing
TU DEVRAIS ESSAYER = you should try
C’EST MOINS CHER QUE DANS UN CENTRE DE THALASSOTHÉRAPIE = it costs less than what you’d pay at a spa
SI TU VEUX = if you like, if you want