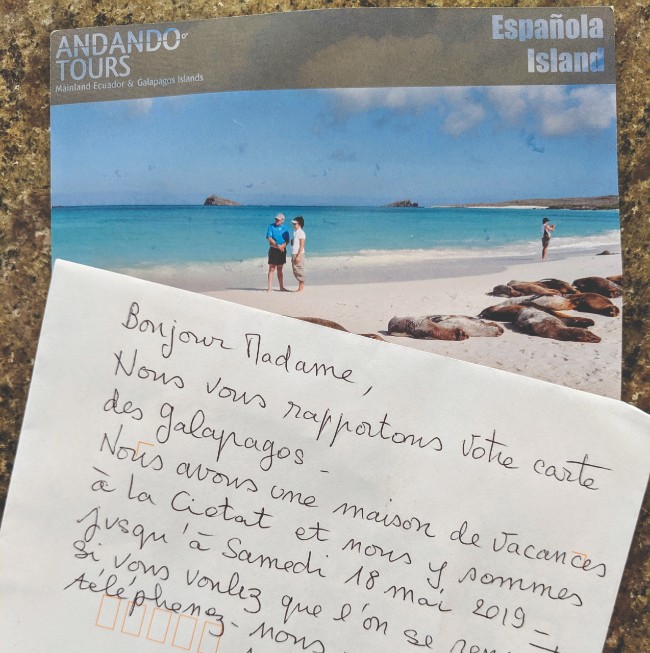 Around noon, when the sonnette rang, I peeked out the window and saw two people at our front gate. They must be selling something, I thought, tempted to flee, when a little voice inside me said: “Don’t hide. Seize the day!”. Hurrying to open the gate, I greeted a man and a woman d’une soixantaine d’années.

Accepting the carte postale, I noticed a message scribbled on the back. There was no signature but the penmanship looked familiar. As I stared at the cursive, the strangers kept mentioning “les îles Galápagos” but the words only sailed into one ear and out the other. In an attempt to communicate something to me, the couple smiled expectantly, but I was as confused as ever. It seemed the only way out was to feign comprehension.

My visitors seemed satisfied and, wouldn’t you know, just as soon as I relaxed it struck me: my dad and his wife had travelled to some islands last month…

Still, how was it these strangers had in their possession a postcard from my family? Had the wind carried it out of my mailbox and these passers-by were returning it? Two unfamiliar faces continued smiling at me and under their charm I gave up and invited them in for a drink. In return I was treated to one whale of a tale….

MESSAGE IN A BARREL

“We were on the Galápagos Islands last month,” the man began. “A long time ago, there were whale hunters in this deserted place. One day the lonely fishermen devised a way to get messages to their families. They set out a wooden barrel in which to deposit their letters. Sailors on passing ships would then pick up the mail.

“The tradition is carried on today by tourists, who deposit letters into the barrel. No stamps necessary! Other tourists visiting the site rifle through the letters until they find one addressed to a city near them. They then hand-deliver the mail and tell the story of the letter’s unusual journey… Nous voilà!” my unexpected visitors chimed, as the story came to an end. “We actually live outside of Paris, but when we saw a letter destined for La Ciotat we grabbed it! We have a pied-à-terre here, and knew we could eventually hand-deliver it, according to custom.” 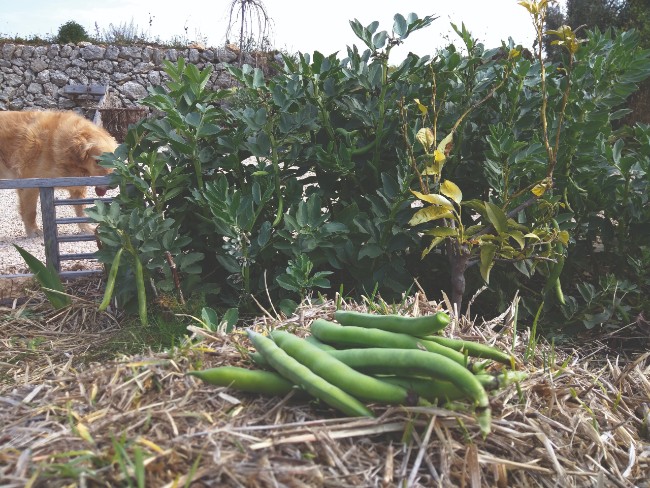 When we stood up to say farewell, my guests noticed the fava beans in my garden. “Ah! We brought back some fèves to plant from les îles Galápagos,” they enthused. “Lucky you!” I replied. Reaching down, I picked several ripe pods and offered them in gratitude for their mission accomplie.

A week later, I found a small package from Paris in my mailbox. Inside were eight precious Ecuadorian fava beans, courtesy of the friendly letter-carriers!

Gazing at the beans, I like to think some homesick fisherman from days gone by tended a mystical garden in between sending letters out to the world from his tiny island. And that these heirloom beans – a gift of friendship – contain a perennial reminder to come out of our shells and connect with others.

Previous Article Dining in Provence: Clover Gordes at La Bastide de Gordes Hotel
Next Article In the Footsteps of Victor Hugo in Montreuil-sur-Mer