Made in France: Caviar d’Aquitaine 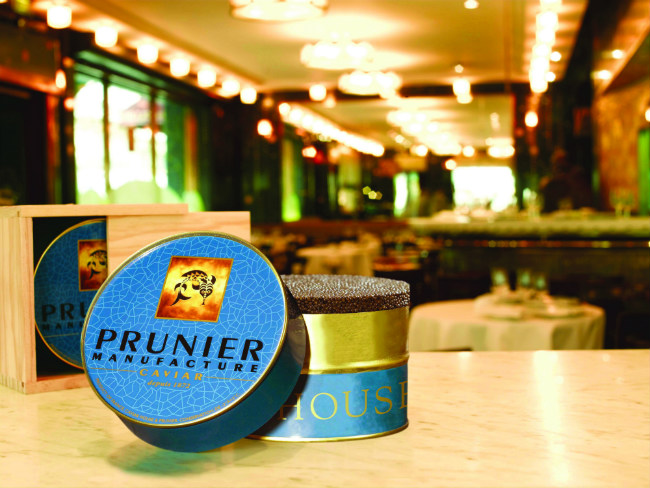 Well-dressed people are gathered on the Rue de l’Odéon in up-scale Saint-Germain-des-Prés for the opening of Caviar de Neuvic, Paris’s newest gastronomic mecca totally dedicated to caviar. Dainty shell spoons surround an extravagant mound of the tiny black pearls and the iced vodka flows, as is customary with this most Russian of delicacies.

But despite its vaguely Russian-sounding name, Caviar de Neuvic does not hail from some chilly outpost on the Caspian Sea: it is French to the core, as homegrown as foie gras and produced practically next door.

Founded in 2011, Neuvic is the newest of seven major producers of farmed caviar in France that have popped up since the late 1990s in answer to a worldwide depletion of wild sturgeon so severe as to precipitate a total ban of the product in 1998.

Nowadays, Caviar d’Aquitaine, a blanket name for the caviar produced in France, is one of the pre-eminent products in the world, second only to Italian caviar. Thanks to an environment well suited to raising sturgeon – a fish abundant in France until overfishing decimated the indigenous population – and ever-improving farming techniques, the French are producing a high-quality caviar to meet an ever-growing demand.

“In 1998 there were 500 kilos of raised caviar produced, compared to 130 tonnes today; wild caviar, on the other hand, went from 300 tonnes to zero,” according to Armen Petrossian, the most famous purveyor of caviar, who sells a range of raised caviars from around the world under the Petrossian label. Petrossian’s forebears were among the first to put caviar on the global map. The rise of caviar as a global luxury food had as much to do with Russian ingenuity as French savoir vivre. The Franco-Russian Alliance of 1892 inaugurated a new Russia-mania in Paris. In the early 20th century, Sergei Diaghilev’s exotic Ballets Russes, based in Paris, helped fan the flames of Russia-mania. As the revolution brewed, the tastes and extravagances of aristocratic Russian emigrés found fertile ground in Paris.

“My father and my uncle had the idea of introducing caviar to France in 1915, when they saw that it was not readily available here. They opened their historic Boulevard de La Tour-Maubourg shop in 1920, where caviar was a flagship product among other Russian delicacies: salmon, Chatka crab, vodka, etc.” Ignoring the advice of Russian contemporaries to Frenchify their name and product, the packaging, which depicts a galleon tossed on a sea of deep turquoise, remains the same today.

By establishing their boutique among the ministries of the 7th arrondissement in the heart of Paris, the Petrossian brothers – who, cleverly, were able to maintain good relations with the new Bolshevik regime in Russia – exposed eminent Parisians to a delicacy prized in the court of the Tsars. Not only prescient in their marketing approach, the brothers also cannily bet on the famous French gourmandise. The Petrossians urged the Ritz, the world’s most glamorous hotel and one of their first clients, to offer caviar in the hotel restaurant, overseen by the legendary chef Auguste Escoffier. Though sceptical at first, the Ritz’s gambit paid off, and soon caviar was a hit among an elite international clientele, helping caviar’s ascent as the ultimate symbol of luxury.

The seafood brasserie Maison Prunier was already a Paris institution in 1925 when it inaugurated its new Art Deco flagship at 16 Avenue Victor Hugo, in an up-scale neighbourhood not far from the posh Champs-Élysées. Madame Prunier’s ties to the Russian elite at the time of the Franco-Russian Alliance had helped it become a favourite of the Russian Grand Dukes and Paris high society. But the Bolshevik revolution put an end to Prunier’s supply of caviar – until a regular client alerted the Pruniers to the presence of sturgeons in the Gironde estuary, near Bordeaux, in France’s Aquitaine region. Until that time, fishermen would keep the prized flesh and throw the eggs to the geese.

Prunier opened nine processing centres on the banks of the Gironde, Garonne and Dordogne rivers, the first enterprise to take advantage of France’s natural abundance, an innovation that assured a steady supply for the restaurant and allowed Prunier to boast a service offering the freshest caviar in Paris – from fish to table in just 24 hours. In the 1940s and ’50s the Shah of Iran entered the lucrative caviar market. “The Iranians did their research and came up with a drier, more mineral salt that allowed for a reduction in the salinity of the product and the discovery of more subtle flavours,” says Nicolas Barruyer, director of Prunier, which offered a selection of the world’s great caviars, alongside the French product. Connoisseurs sparred over whether Russian beluga or Iranian ossetra and sevruga were the best. They were certainly the priciest, bringing anywhere from the equivalent of €500 to €5,000 per kilo, with some rare varieties commanding significantly more.

By the 1980s, soaring prices, and demand, led to the endangerment of every species of caviar sturgeon on the planet, precipitating 1998’s total ban of all wild caviar, including the prized beluga. In 2007, and again in 2010, the United Nations partially lifted the ban, imposing strict quotas on Caspian countries where wild beluga can still be found. But the criminal trade has pushed the fish – which can live up to 100 years and weigh 800 kilos – to the brink of extinction. (Fishing quotas were up for review, and probable revocation, at the time of this writing, in December 2015). In France, the ban on its indigenous wild sturgeon, acipenser sturio, has been in place since the 1980s and efforts at repopulation have been slow. By contrast, French aquaculture is thriving. Among the first countries to authorize sturgeon farming, France convinced the Russians to trade in expertise, and Siberian baerii sturgeon for French trout. The clean waters of the French rivers proved ideal for farming.

According to the Comité Interprofessionnel de Produits de l’Aquaculture, the organization for French aquaculture producers, in 2013 France produced 21,000 kilos of caviar – triple the amount produced in 2003 – mostly from baerii, the only species approved in France until recently. The other, acipenser gueldenstaedtii, which produces the finer and more expensive ossetra variety, is still in the early stages of production. Yet although profits can be big, they are not immediate. “It takes seven to nine years before the eggs are ready for harvest,” according to Hélène Galliez, head of public relations for Caviar de Neuvic.

Founded nearly five years ago, Caviar de Neuvic will not start selling caviar from fish hatched in its own fisheries until around 2018. For now, the eggs are from sturgeon purchased from other French farms and raised in Neuvic’s basins, which are refreshed six times a day with water from the nearby Isle River. Just like any other country that raises caviar, quality differs from producer to producer. “For caviar one must consider the process used in raising the fish. Our principal selection is in France, but we also buy from the US, Bulgaria and China. There are more than 70 farms in the world and the choice is huge,” says Armen Petrossian. But all the caviar sold under the Petrossian name is processed here. “Our installations are in France, our personnel is French and all of the steps that add value to the product is implemented in France. So we ultimately consider that our products are French, even if we import a portion of the raw product from abroad.”

How does the French variety measure up? According to Nicolas Barruyer of Prunier, “It’s really a matter of taste. If you like to drink vodka with your caviar then the very salty Russian varieties work well. But the subtler French caviar pairs well with champagne or white burgundy.”

The producer with the longest experience in France, Prunier serves only their own French caviar at the restaurant and at Café Prunier on Place de la Madeleine, Paris’s caviar central. But for a real Parisian experience, Prunier’s Victor Hugo brasserie, a masterpiece of Art Deco designated a historic landmark in 1988, is a good place to start. “My wish,” says Barruyer, “is for everyone to come here at least once.” Caviar de l’Aquitaine: Where to eat and buy french caviar in Paris…

Where to eat French caviar in Paris

* le 144: Part of the Petrossian empire, this bright, elegant restaurant serves an up-scale French clientele from the nearby Assemblée Nationale.

* Caviar Kaspia: Above the gourmet grocer, this is where Paris luminaries, rock stars and other beautiful people come to swill champagne and down buckets of caviar. Where to Buy French caviar in Paris

* Petrossian: This historic shop was the first to sell caviar in Paris. They carry a range of the best farmed caviars from throughout the world. 18 bd de la Tour-Maubourg, 7th, 01 44 11 32 32, www.petrossian.fr

The Neuvic comptoir in Paris