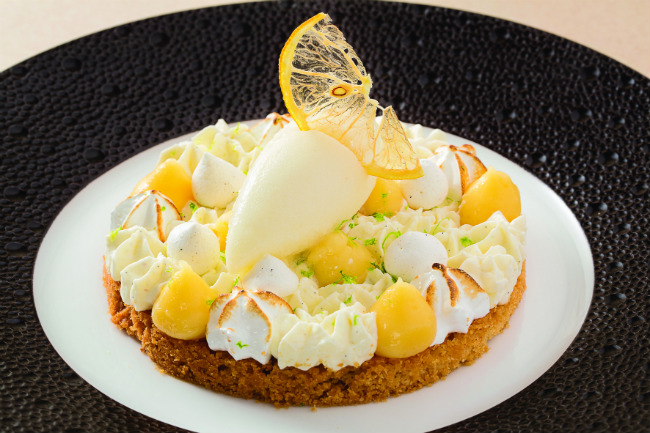 Ever since it was founded by chef Christian Constant, who has a cluster of other popular restaurants in the same well-heeled Left Bank neighbourhood, including Les Cocottes and Le Café Constant, this intimate restaurant overlooking a small, pretty fountain has been a favourite of visitors to Paris. What everyone has always appreciated at this quietly chic table was the beautifully cooked – mostly all seafood – menu, the open-daily serving hours and the charming service.

Now the restaurant has been reinvented with a new décor, a new menu and a new chef, Julia Sedefdjian, a 21-year-old native of Nice who began her career at the restaurant as sous-chef before being promoted. Meat and fish now get equal billing on the menu, but beyond the welcome lower prices, the most surprising change here is the vivid, lively and very inventive cooking style of Sedefdjian. She cooks the sort of brightly flavoured and carefully composed contemporary French bistro cooking more commonly found in the edgy, younger arrondissements of eastern Paris than a conservative, bourgeois quartier like this one.

Aside from the good quality of the produce and the professional cooking, what now makes a meal here so appealing is the earnestness of the cooking and the enthusiasm of the friendly, young serving staff. Sedefdjian has a puppy-like playfulness in her work, as seen in a dish of pumpkin soup garnished with squid tempura, grilled pumpkin seeds, and a folded roll of butternut squash filled with squid and pumpkin seeds – a delicious composition of tastes and textures. Not everything works, of course… The natural flavour of oysters in their shells on a superfluous purée of aubergines was overwhelmed by peculiar garnishes of kiwi juice and lemon pulp.

Scallops in their shells under fleeting tufts of citrus-flavoured foam were excellent, however, and Sedefdjian makes a marvelous grand aioli, that ur Provençal dish of poached cod with vegetables and two sauces, an aioli (garlic mayonnaise) and a roux. It is served with a colourful presentation as well, since the fish arrives at the table on a large, sunny yellow plate, surrounded by a variety of baby vegetables, carrots, leeks, artichokes, potatoes, romanesco and purple cauliflower.

The one dessert you should not miss at Les Fables de la Fontaine is the kitchen’s modern take on a lemon meringue tart. What makes it so different is that a shortbread crust replaces the usual pastry.

Reservations are advised, since this restaurant has now become just as popular in its new format as it ever was in its old.