Moreish Marseille: Culinary Evolution in the South of France 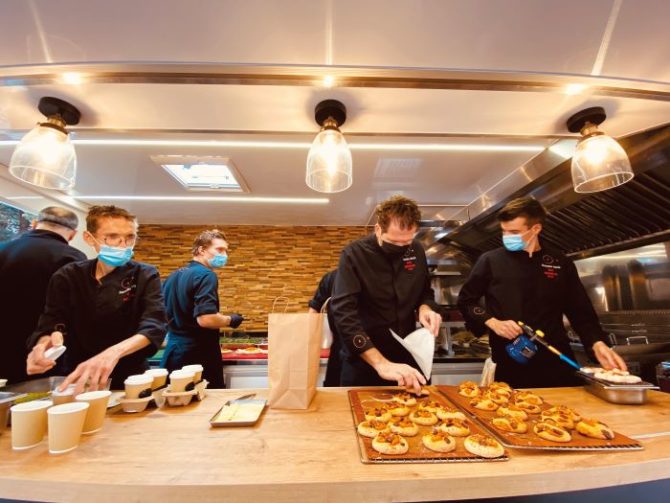 Can food help a city through a crisis? When there are no tourists, what do chefs do? They get creative, help each other and feed their flocks, whatever it takes, says Jennifer Ladonne.

The sunlight glittering off Marseille’s Old Port is almost blinding as I emerge from the metro. It’s springlike in early February and a crowd of skateboarders and teenagers are taking in the rays as ﬁshermen pack up their stalls from the daily morning market, a young couple dangle their legs off the edge of the quay, sipping takeout coffee, and two old men on a bench stare out to sea.

This is Marseille: a shared moment outdoors in the sunshine. Suddenly life feels almost normal. At my hotel just across the quay I can shed my winter armour, donned early this morning against the cold Paris drizzle before hopping on the train for the three-hour trip south. I’ve done this a dozen times before, but the intense pleasure of arriving in the shimmering air of Marseille never diminishes. I throw on a light jacket and prepare to do what I always do here, head out for a bite. Until the pandemic turned everything on its head, Marseille’s food scene was one of the most exhilarating in the whole of France. 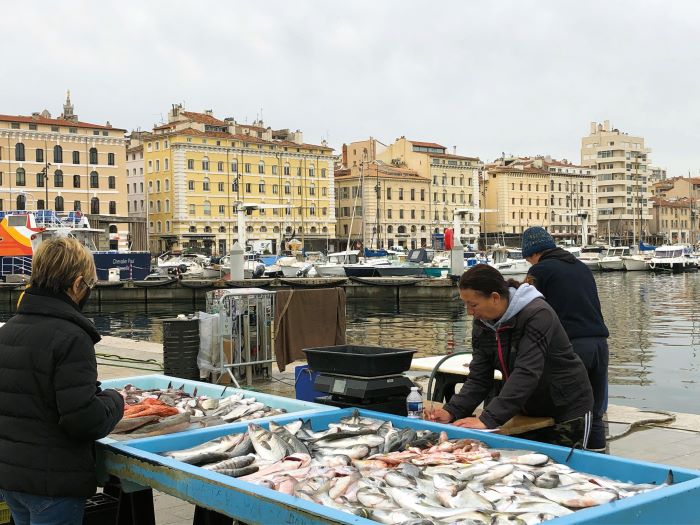 It wasn’t just bistronomie: a slew of talented young chefs expressing themselves in new and exciting ways. That’s easily found in Paris, Lyon and beyond. Marseille’s culinary richness springs from the city’s deep relationship with the Mediterranean, its rich multicultural identity, and an incredible abundance of locally and organically grown ingredients. Add to that sea, sun and a 2,600-year-old culture and you’ve got a city utterly unique in France.

Another less tangible factor in the city’s gastronomy can only be called the spirit of Marseille. People here are passionate, proud, forthright, and share a deep identiﬁcation with their city and each other. This spirit has never been more pronounced than in the city’s culinary scene, as chefs have been forced to be even more resourceful, resilient and creative. They’ve also gone the extra mile in these difficult times to nourish their city and assist each other. 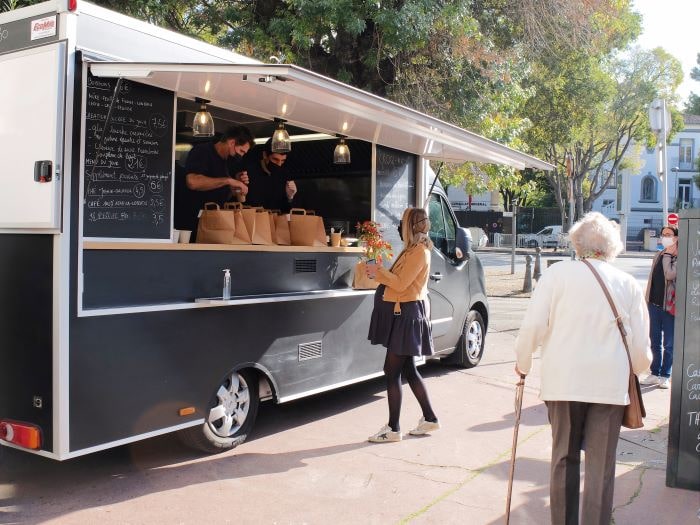 DINING WITH THE STARS

It’s no exaggeration to call Alexandre Mazzia’s restaurant AM a place of pilgrimage. But despite all the reverence – and a rare third Michelin star bestowed on Mazzia in January this year – when the pandemic shuttered his restaurant he didn’t hesitate to open a food truck.

Though Mazzia bristles at the notion that this is three-star cooking, it’s clearly not the menu you’d find at just any food truck. Here, he and his team of nine cooks create the kinds of small wonders of colour, texture and flavour that the chef is famous for, although on a much less elaborate scale.

“People can eat something different standing up that will be surprising and healthy. Food to be shared, that’s essential,” he says.

Dishes like hummus with seaweed, crêpes made from local cédrat lemons, and three takes on the classic croque-monsieur: vegetable, smoked pastrami or truffle, all locally sourced.

Any other year, the chef might have been basking in three-star glory (Mazzia is one of only two three-star chefs in Marseille). But he seems to be enjoying the change. “It’s pleasant, people come for a coffee and to chat in the morning; we create ties, offer accessible food,” he says. “To please, it has to be sincere and well-crafted, adapted to the truck. In the beginning we served street food, but since people wanted menus they could eat sitting we modified ours to adapt to what people are looking for.”

There’s a permanent line in front of the sleek black truck parked at the corner of a nondescript street in a residential neighbourhood a few steps from the restaurant. In one of the pandemic’s silver linings, locals who could not afford €100+ for lunch and €200+ for dinner at Mazzia’s restaurant are flocking to the truck, where he can serve 150 to 200 people a day, in contrast to the restaurant’s 24 lucky diners.

The truck also allows Mazzia to support his staff and his growers, whom he regards almost as family. Despite having reached the highest level for a chef in France, he does not have plans to enlarge or to budge from the off-the-beaten-path spot where people predicted years ago he’d never earn a star. “We got a distinction but I won’t change; we’ll have the same rigour, the same diligence, desire, passion. I took up the challenge of being myself when I opened here, to do things I enjoy and to please people… to keep my freedom. We are close to people, it’s small, intimate, on a human scale.” 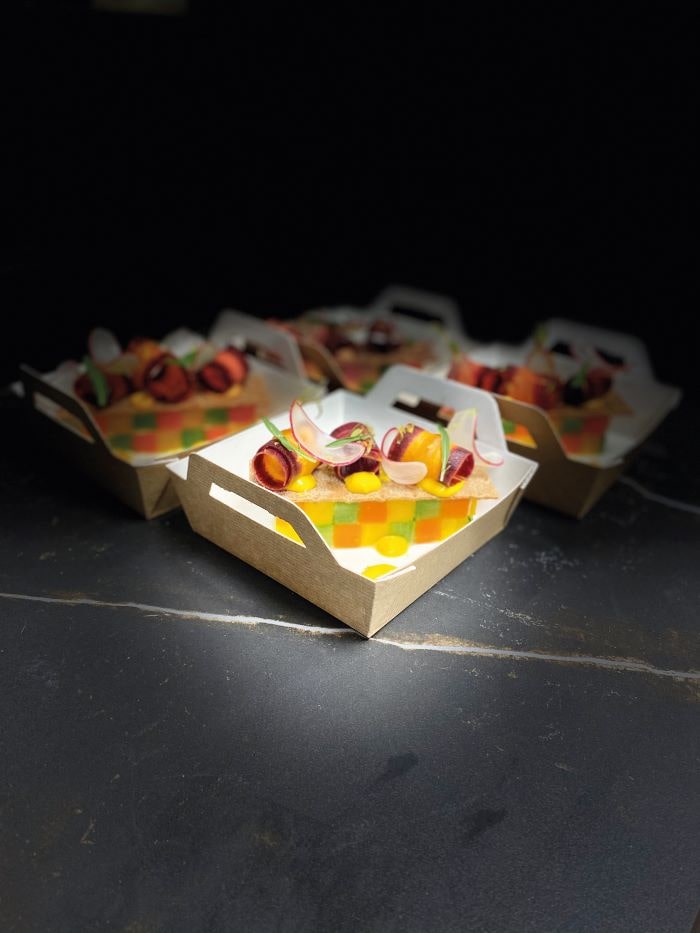 When I arrive at Signature, chef Coline Faulquier is busy putting the finishing touches to a gorgeous salad of rainbow-hued beets. Faulquier’s small, elegant restaurant in a residential neighbourhood not far from AM had been open just over a year before the first lockdown in March 2020. The restaurant reopened in time for the crazy tourist rush (mostly French) in July until the second confinement in October – long enough for Michelin to take note. Faulquier was awarded her ﬁrst star in January this year. Since then, the young chef has been ﬁlling 100 takeout orders a day in what must be the city’s most reasonably priced Michelin-star meal: appetiser, main dish (ﬁsh or meat), dessert and mignardises for €33. 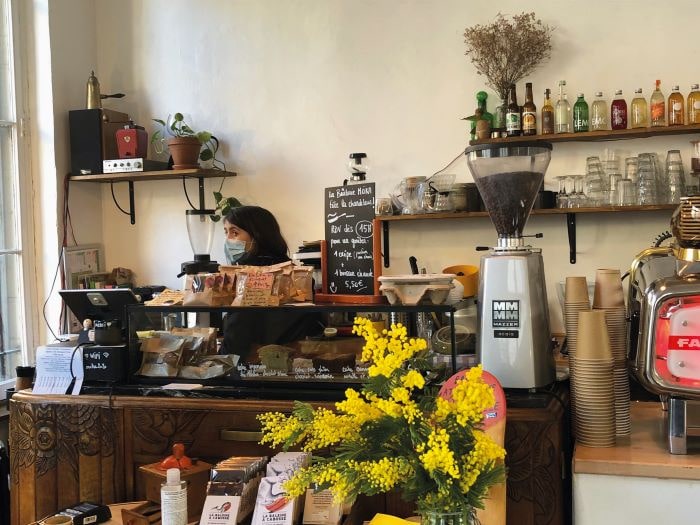 Faulquier, who trained with some of the biggest names in France, including three-star chefs Éric Fréchon in Paris and Christophe Bacquié in Provence, and was a Top Chef ﬁnalist, is known for her dynamism and directness as much as for her artistry. The chef is frank about the constraints: “The pandemic showed us that we were capable of adapting. In fact, it teaches us something new, to roll up our sleeves. We have to close? What do we do, cry? No, we can do this, but differently.”

Faulquier adapted to the crisis by simplifying her menu, which changes weekly depending on what’s available at market. “I’m inspired by the products, I love the terroir, I love Marseille, the city,” she says. 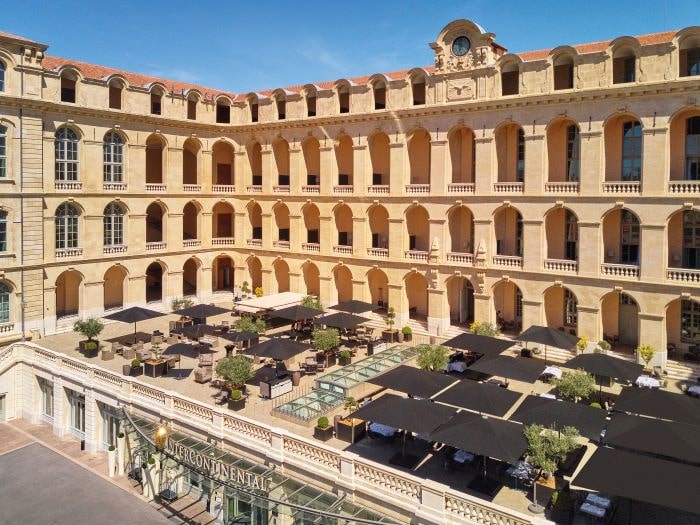 The handsome facade of the InterContinental Hotel Dieu. © Eric Cuvillier

Support from other chefs was crucial in her decision to strike out on her own when she found herself between cooking gigs, tending to her young son and trying to decide her next move. “I have support from other chefs because I love people and I think life is about encounters. I’m passionate… We adapt, we move forward. There’s solidarity between chefs. In Marseille we are not so many and we have good relations, so I’ve always found support – we call each other, send clients.”

One of the chefs who encouraged her was Lionel Levy, a Michelin-starred chef with two restaurants at the city’s top hotel, the InterContinental Marseille Hôtel-Dieu. It’s strange to stand alone at the tall gates – now ﬁrmly padlocked – of the majestic 18th-century hotel, certainly Marseille’s, and one of France’s, most impressive lodgings. It is also a culinary destination, thanks to chef Levy, whose restaurants, Les Fenêtres bistro and the one-star gastronomic temple Alcyone, are enjoyed as much for the food as for their glorious setting overlooking Marseille’s Old Port.

Today, we sit in the dark bistro, a sack of croissants ripped open on the table, looking out over the famous terrace, now empty. When the hotel went dark, Levy and Fabien Rugi, from Marseille’s beloved seafood bistro La Boîte à Sardine, together with GourMéditerranée, an association of Provence chefs, opened a food truck on the square below and invited one or two different Marseille chefs each day to offer their dishes to go. “We were forced to help each other out in these times. For small enterprises its very hard right now, we need to help them. This is new, this was unpredictable. We also continue supporting our producers,” says Levy.

IT TAKES A VILLAGE

If the pandemic has levelled the playing field for restaurants in ways both calamitous and heartening, it’s also highlighted the role of Marseille’s neighbourhood food shops and grocers for people staying closer to home. This is an integral side of Marseille’s culinary culture that visitors rarely see – unless they have the good fortune to encounter American food and travel writer Alexis Steinman.

Steinman’s knowledge of the restaurant scene is impressive, but a good part of her enthusiasm is reserved for the smaller mom-and-pop shops, many of whose owners she’s come to know personally through the food tours she conducts for Culinary Backstreets Marseille. Steinman likes to think of Marseille not as a single city but as “111 villages”, each with its own character and enticements. So after a delicious lunch of a takeout fish sandwich from the superb new restaurant Limmat, on the steps leading up to the chicly bohemian Cours Julien neighbourhood, she leads me on a stroll through a Marseille I’m delighted to be discovering for the first time, spiced up with historic titbits from her impressive knowledge of the city.

“This Mediterranean port has welcomed myriad cultures on its shores for 2,600 years. Ships laden with foodstuffs, spices, and recipes from across the globe, from China’s star anise infused in our iconic pastis to the panisses cooked by Ligurian fisherman to remind them of home. You can find Mediterranean falafel, Vietnamese bo bun, Tunisian tagines, and West African mafa peppered around the city.”

From Cours Julien we head to the quartiers Chave, Cinq-Avenues and Longchamps, stopping in places like the deliciously fragrant Pain Pan artisan boulangerie and Exosud, an eye-popping Lebanese grocer brimming with specialties of the Levant. We pass the Distillerie de la Plaine, makers of their own pastis from local Provençal herbs, and Latin American food truck Pachamama Sud.

Before heading to the Noailles, Marseille’s most thrilling and diverse neighbourhood when it comes to food, we stop to sip white wine from plastic cups on the Cours Joseph Thierry among groups of locals taking in the golden rays of the setting sun before the 6pm curfew. A bid for normality that reminds me how breaking bread together is a part of life we cannot do without. Something Marseille figured out long ago. 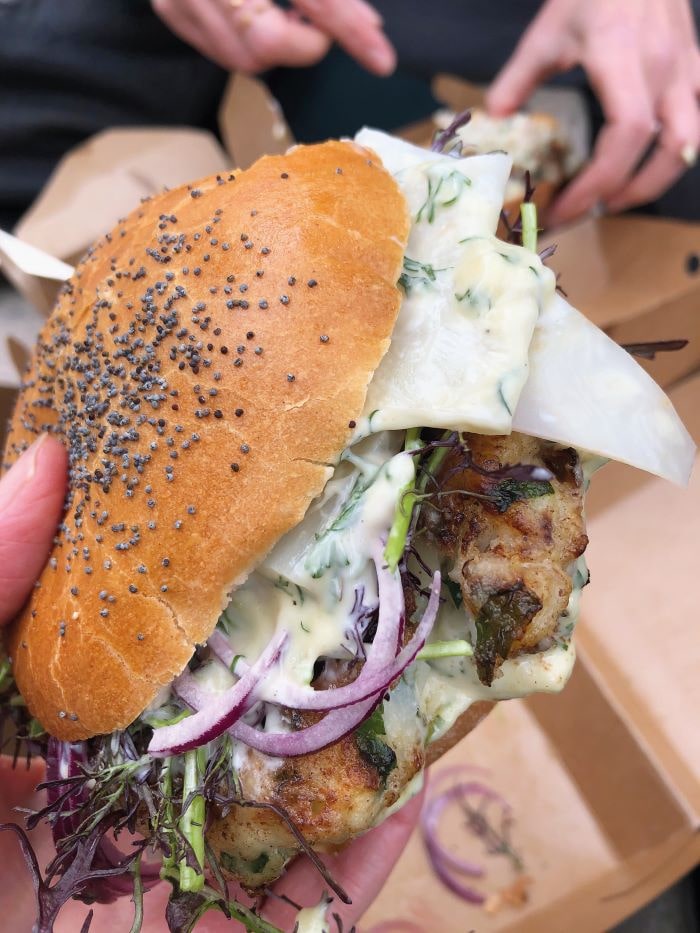 Across the street from the Old Port, the chic (and reasonable) boutique hotel Maison du Monde opened in January 2021. Be sure to avail yourself of manager Nicolas Cozzolino’s extensive knowledge of the local wines for a glass or two in the hotel’s convivial lounge or your comfy room.

Marseille Provence Gastronomie organises festivals around food in Marseille and the towns of Provence. It’s a great resource for checking out special events organised year-round and all things food-related.

For online brochures, suggested itineraries and all the information you’ll need to plan a visit to Marseille and the area: www.marseille-tourisme.com, provence-alpes-cotedazur.com 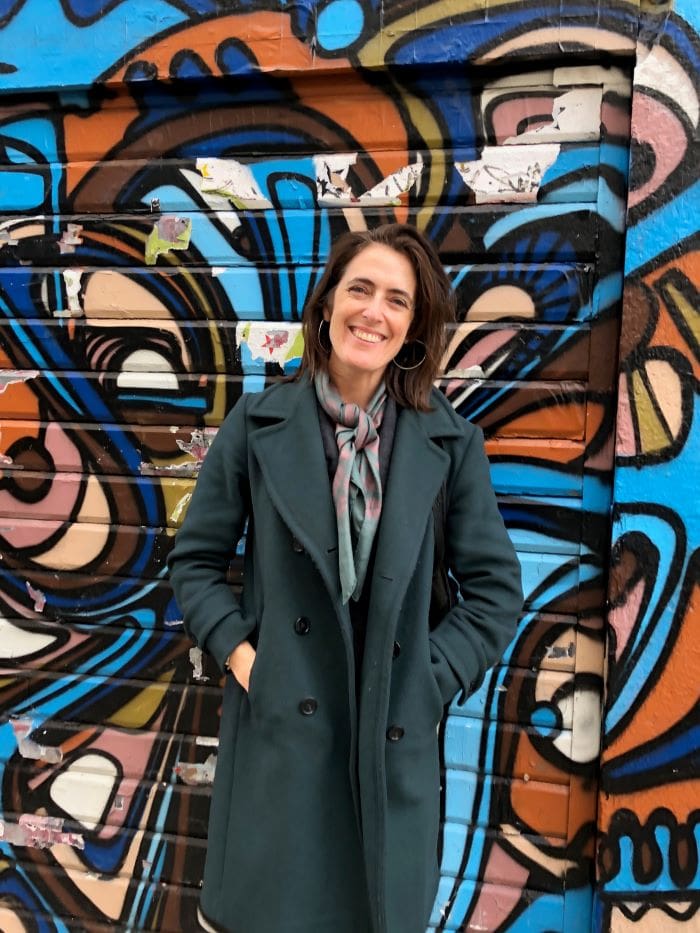 Previous Article The Luberon’s Enchanting Village of Lourmarin
Next Article What Really Matters: The New Tourism Campaign by Atout France