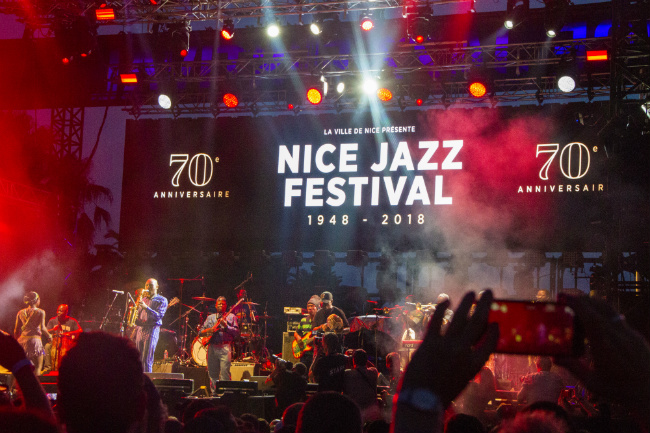 Stretching the bounds of the genre, from Old School Jazz to Flamenco, Rap and Beyond

Though many of the acts at this year’s Nice Jazz Festival were decidedly not jazz by the classic definition, the happy fans didn’t seem worried about semantics. As Sébastien Vidal, festival artistic director, said in an interview with the local newspaper, Nice Matin, “All the artists this year have a proximity to jazz… We have opened up Pandora’s Box in a mix of musical genres…They are all in the same galaxy.”

It was definitely a stretch to call them all jazz, but who’s counting? 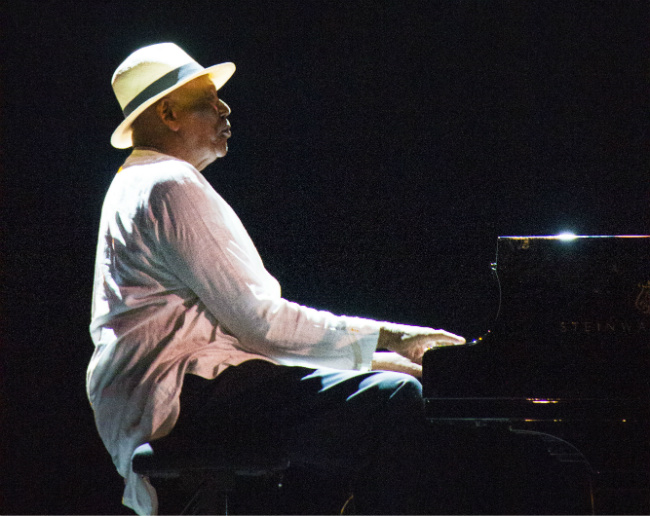 The two festival stages– which were set far enough apart to let the music blast– featured more straight-ahead jazz artists on one stage, in the Théâtre de Verdure, while the more raucous groups, where listeners could be on their feet, dancing and rocking out, took place on the other larger stage at Scéne Massena, a wide open space without chairs. No cool and collected jazz music here. 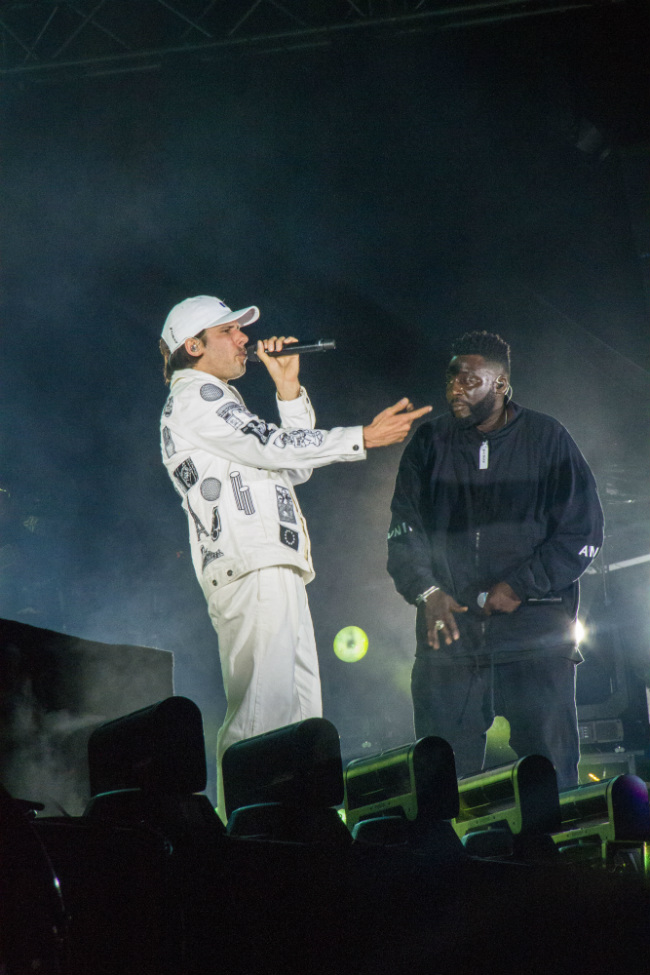 This year’s festival suffered a few glitches, the most serious being the postponing of the opening night due to a late afternoon downpour and thunderstorm. Headliner Gregory Porter was deftly moved to the next night, but a few of the opening-day acts, such as Kyle Eastwood and Kimberose, were cancelled to the dismay of many fans expecting to catch them here in Nice.

Another surprise was the cancellation due to illness of Rag n’ Bone Man, one of the featured artists on the last night of the festival. He was quickly replaced with singer Laura Pergolizzi, who doesn’t exactly run in jazz circles, but was a crowd pleaser none-the-less. 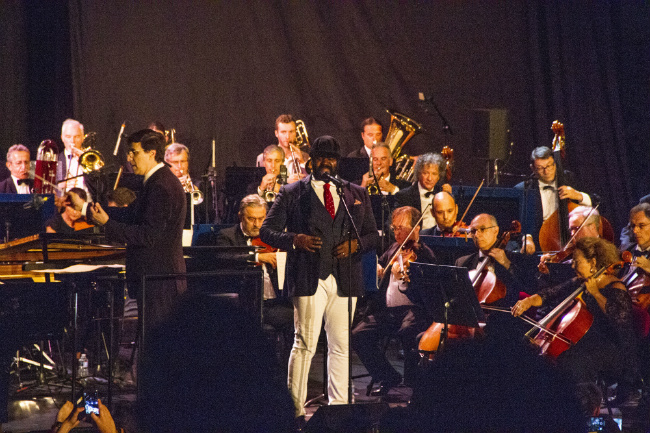 A pleasant surprise for me was blues singer, Deva Mahal, daughter of the one and only blues guitarist, Taj Mahal. I wondered if she could live up to her illustrious father, but she really did, and in her own audacious way. Dressed in a bright red off-the-shoulder dress and silver boots, she was beautiful, bold, talented and open-armed to her fans in Nice. She had the stage presence of someone born to it. She sang blues, R&B, played guitar, and got the crowd rocking and rolling.

When asked by one of the audience members if they could join her on stage to dance, she responded, “If they’ll let you up here, I won’t make you go away.” Later in a video interview following the performance, she told her new French fans, “I love you!” 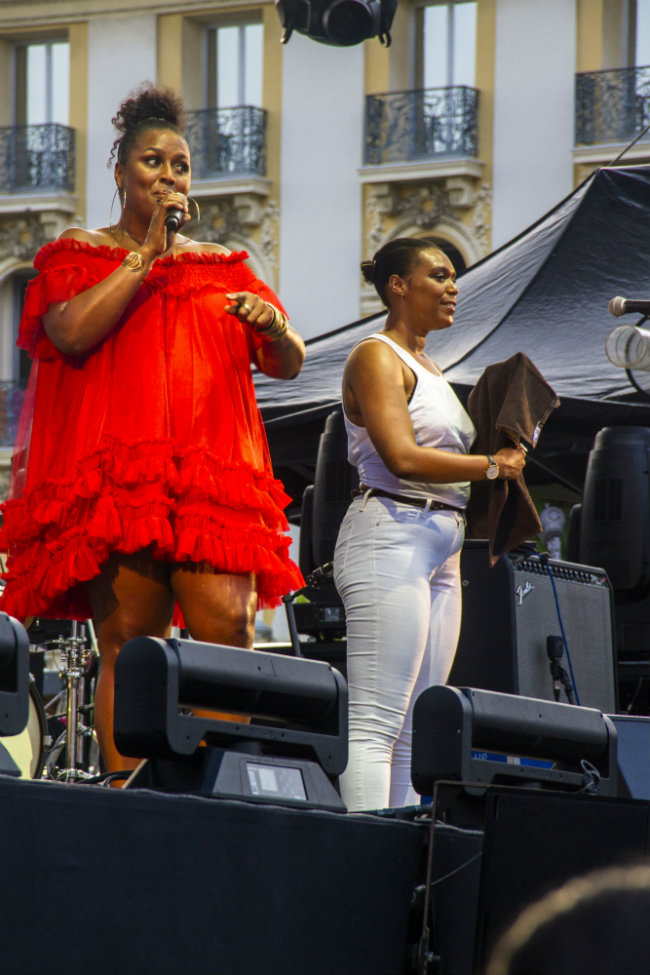 Django fans should have been happy this year. The opening act of the festival, the Amazing Keystone Big Band with Mr. Django and Lady Swing, was a cabaret-like hommage to Django Reinhardt. The last night featured the Trio Rosenberg, a Dutch group whose members are all from the Dutch Gypsy community, and whose music is dedicated to the great gypsy jazz artist. 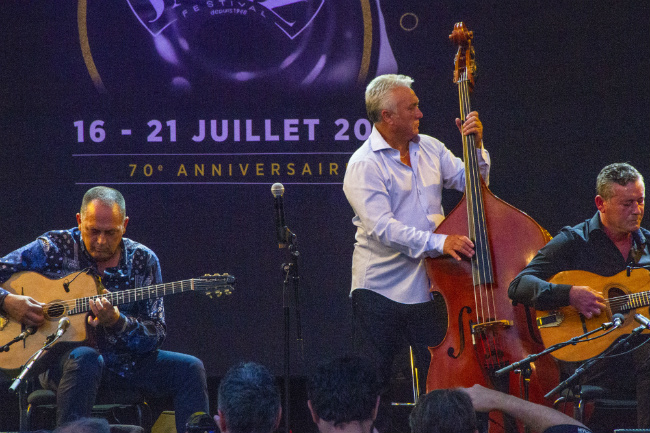 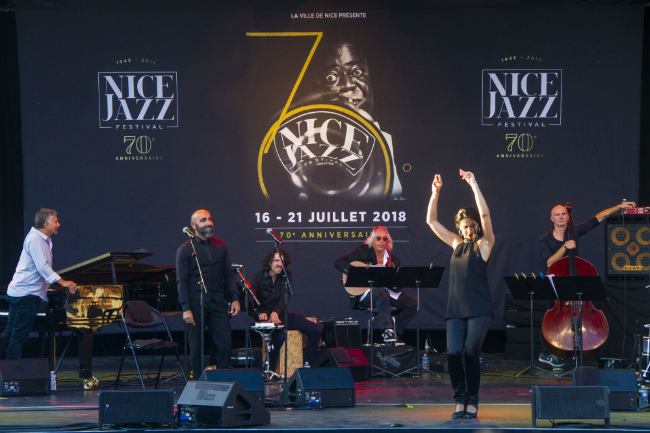 Nice’s own Pierre Bertrand, director of the Nice Jazz Orchestra, and extraordinary musician and composer, played tunes from his 2010 recording, Caja Negra (Black Box), a jazz-flamenco fusion, which Bertrand describes as “a musical stroll” through the Mediterranean, Africa and Latin America. 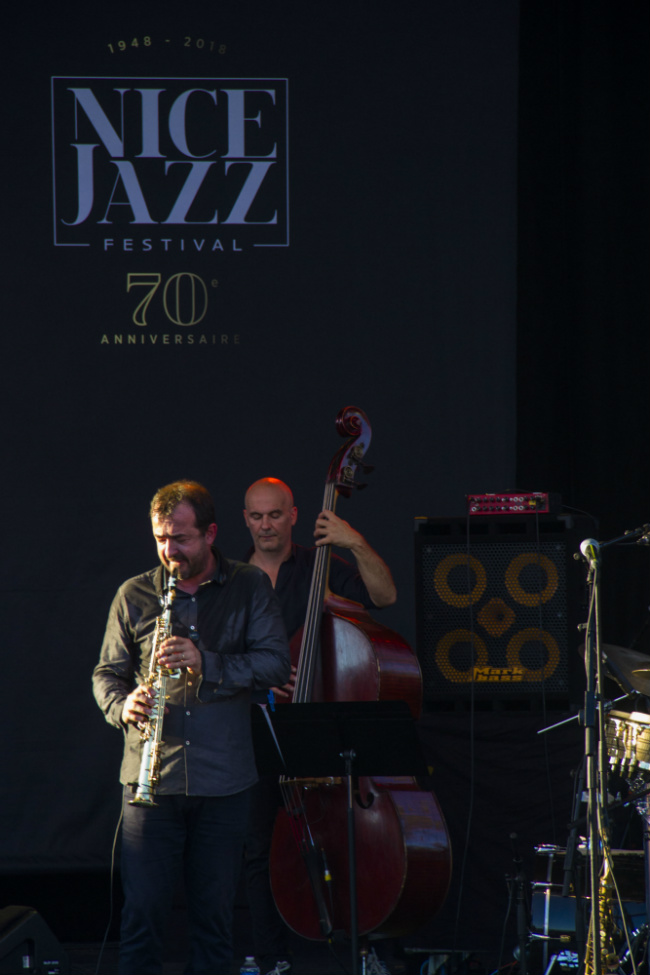 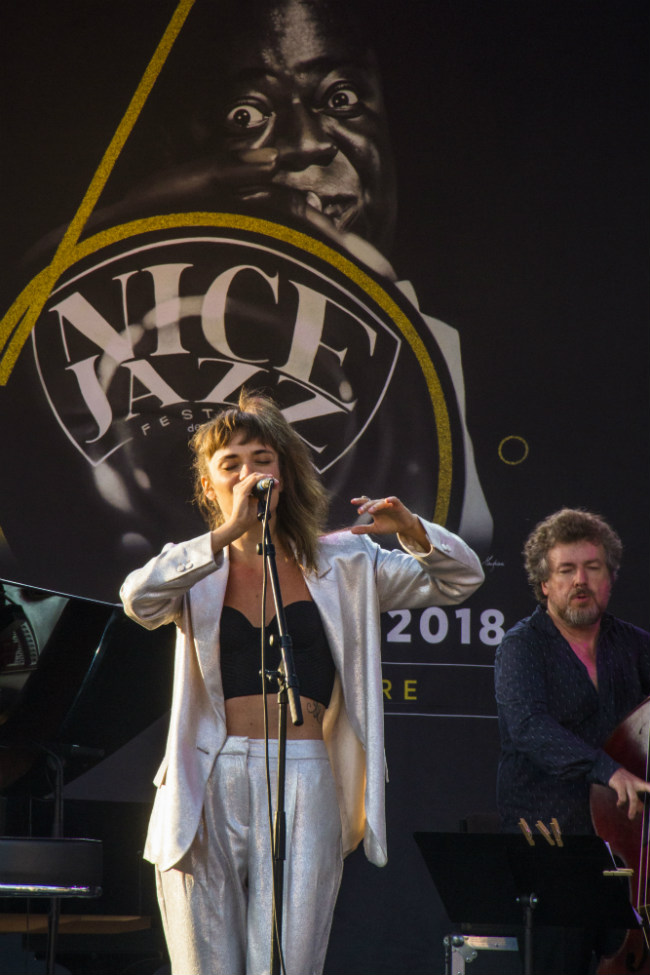 “Sometimes great successes can come from minor setbacks,” explains Jazz History Online. “One day in the middle of 2015, French jazz vocalist Camille Bertault failed a conservatory exam, and to boost her spirits, she wrote a set of French lyrics to one of John Coltrane’s best-known compositions. The words spoke of the “Giant Steps” it took to realize that one’s own expectations are more important than the expectations of others. Then she cued up Coltrane’s original recording, set up a video camera, and recorded her performance, which she later uploaded to Facebook for her friends.”

The video went viral within days.

Long story short, she became an Internet sensation, and here she in 2018 singing at the legendary Nice Jazz Festival. 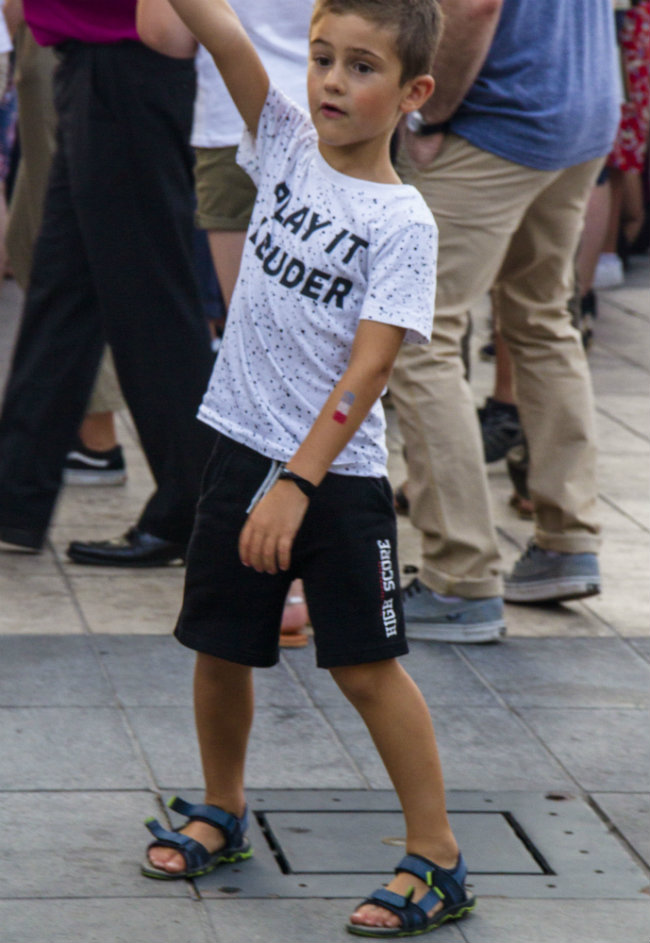 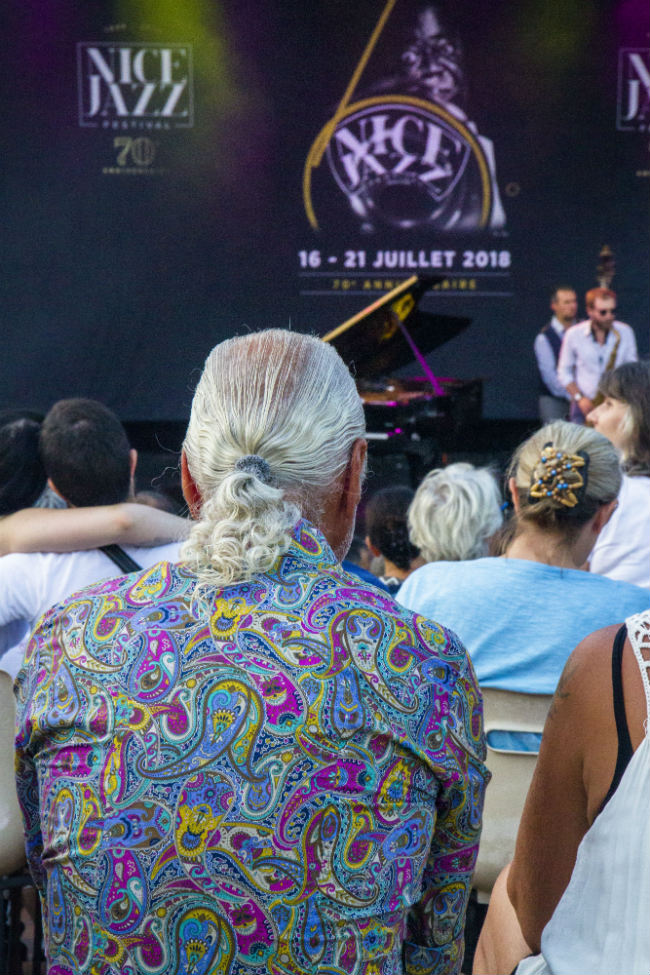 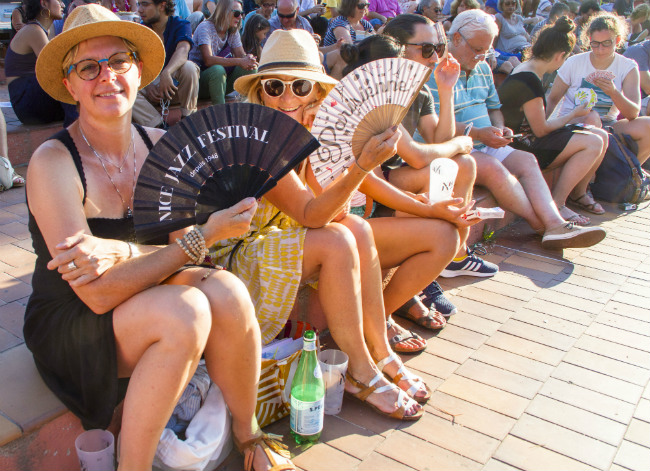 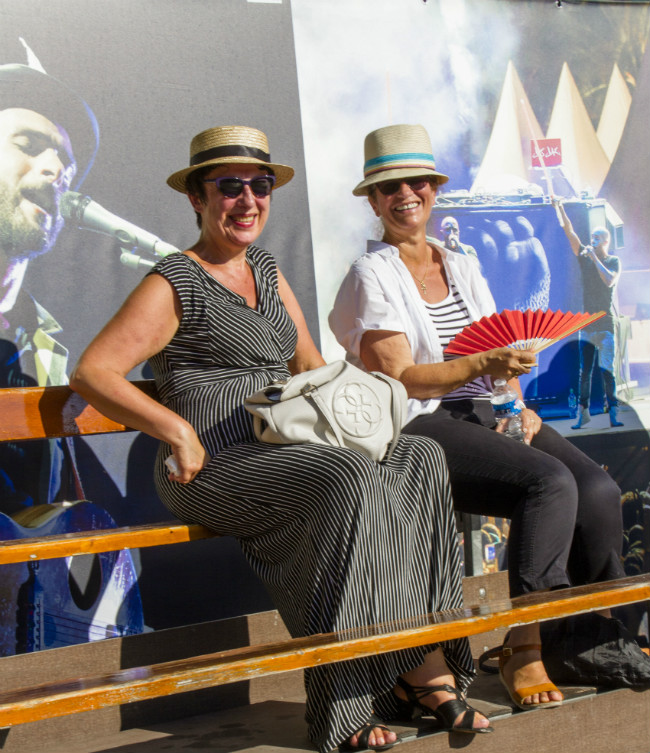 The weather was hot, but the music was cool. Photo: Mary Kay Seales

Even with the festival losing one day on opening night, there was plenty of music to satisfy. The weather was perfect, hot in the late afternoon, but cooling down as the music heated up. The crowd was all ages, with some little ones joining in – the next generation of NJF fans.

Is it Jazz? And does it matter?

While it may not all have all been jazz by strict definitions of the term, it was the Côte d’Azur on a summer night, with worldclass live music outdoors. How can you argue with that? For me, one gentleman’s t-shirt said it all with a quote from Franck Zappa: “Jazz is not dead. It just smells funny.”

To see the full festival lineup for the Nice Jazz Festival 2018, go to: http://www.nicejazzfestival.fr/en/ 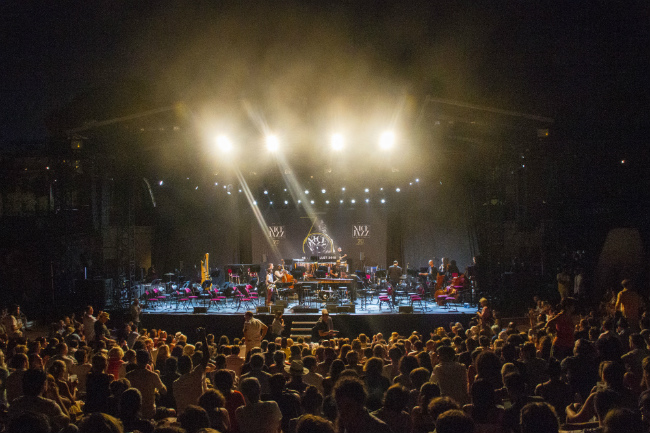 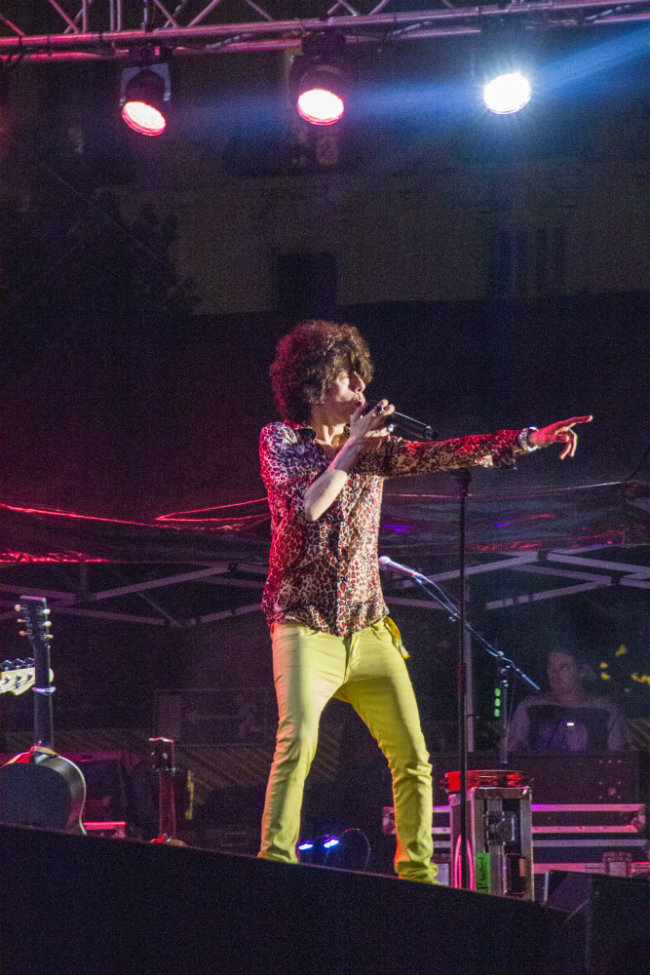 Previous Article Where to Eat in Dordogne: Hotel de Bouilhac, near Lascaux IV
Next Article Shot on the Riviera: The Victorine and a Hub for French Film