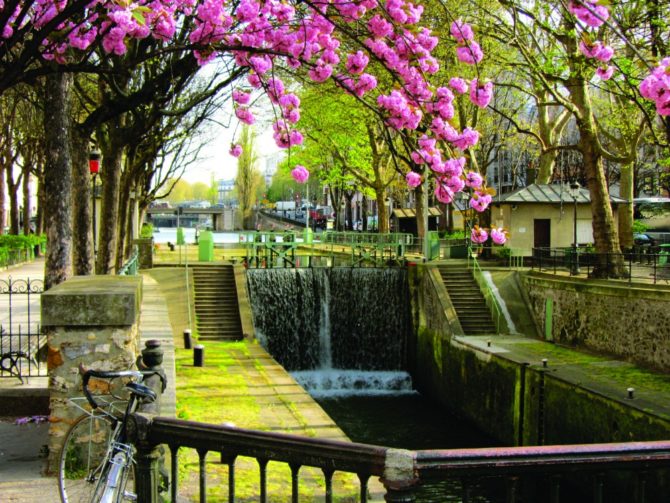 One of the most unforgettable moments in French cinema is the lovers’ spat on a Paris bridge in Marcel Carne’s 1938 film, Hôtel du Nord, named after what was then a real boarding house in the 10th arrondissement of Eastern Paris. When her paramour complains that he needs a change of atmosphere, the character played by French actress Arletty shoots back, “Atmosphère, atmosphère!? Est-ce que j’ai une gueule d’atmosphère!?” (“Do I look like someone with atmosphere!?”) But of course, she did…

With her vivacity and delicious titi Parisien argot, Arletty personified the spirit of the Canal Saint-Martin, the colourful working-class neighbourhood surrounding the Hôtel du Nord. Somehow, despite several close shaves with the wrecking ball, the Hôtel du Nord and its iconic facade overlooking the canal survived and continues today, in the form of a bustling, über trendy restaurant and bar.

“People who come here for the Hôtel du Nord, they’re coming for le vieux Paris, for everything that film represented,” says co-owner, Guillaume Manikowski. “We’re trying to preserve that… it needs to be un lieu de vie, because one thing this place has always been about is conviviality.”

And yet just a couple of decades ago the banks of the Canal Saint-Martin were – to a large extent – deserted, lined with shuttered factories and crumbling buildings. Then a handful of young entrepreneurs arrived and began injecting new life into the area.

Today, the neighbourhood is one of the most fashionable in Paris. To look upon its bridges and tree-lined banks, explore its eateries and shops or cruise the waterway by péniche, it’s clear that despite this transformation from quartier populaire to quartier à la mode, the Canal Saint-Martin has retained it own character, rhythms and unique atmosphere.

Today, those who throng the banks of the canal with their picnic blankets have Napoleon Bonaparte to thank. “I’d like to do something for the Parisians,” Napoleon is said to have told his minister of the interior in 1802. “Et bien donnez leur de l’eau!” (“Give them water then!”) was the official’s wise response. Napoleon ordered the creation of the canal that year, though it wasn’t until Christmas 1826 that Parisians finally received their ‘gift’ of a new navigable waterway, one which also supplied north-eastern Paris with somewhat potable water.

The Canal Saint-Martin extends some 4.5 kilometres from the Seine to the Bassin de la Villette – where you will find the 18th-century Rotonde, the former customs house – and did more than satisfy the surrounding neighbourhood’s thirst, it provided a new raison d’être. Factories of all kinds could now be built along the canal, whose waters fuelled steam engines and allowed the easy reception of raw materials and shipping. The waterway flourished with trade and production and, in the late 19th century, one foundry was even commissioned to cast portions of sculptor Frédéric Auguste Bartholdi’s Statue of Liberty.

Sadly, this age of great fluvial commerce would not last and today only a few vestiges of the canal’s industrial past remain. Carré, the handmade ceramic tiles specialist, has stood on the Quai de Valmy since 1888. Opposite, on the Quai de Jemmapes, the Clairefontaine paper factory is still active, as well as Cristallerie Schweitzer, the last atelier of its kind in the City of Light. By the 1960s local business activity was so down that local government even debated a project to replace the canal with a high-speed autoroute. Public uproar saved the canal but its future remained uncertain.

In 1998, bartender friends Christophe and Daniel were growing tired of the packed, testosterone heavy Bastille bar scene. Longing for a change of scenery, they happened upon a cafe for sale on the corner of Quai de Valmy and Rue Beaurepaire.

“The bar wasn’t very attractive,” recalls Christophe, “there wasn’t much clientele, the neighbourhood was run down, there were no stores, Saturday it was dead… but this proximity to the canal seduced us immediately. The water made it all feel Zen.”

The pair stripped the cafe down to its original circa-1900 decor, set up a terrace overlooking the canal and named it Chez Prune. “It took several years to take off,” says Christophe. “But one after another new businesses began to open, and it created a kind of dynamic.”

Starting in 1999, a string of three new ethnic-urban-chic clothing and decoration boutiques opened up on Quai de Valmy under the name of Antoine & Lili. According to Marianne, who heads the mini-chain’s ‘Femme’ boutique, at that time a young entrepreneur couldn’t have hoped to buy three 19th century facades for next to nothing anywhere else in Paris.

“So many factories and businesses had closed down,” she recalls. “That’s also the history of the canal – the death of a whole manufacturing tradition, and the new, more urban life brought by architects and artists who swooped into the neighbourhood, drawn by affordable properties.”

With pioneering verve, new businesses often seemed to trumpet their arrival with colourful awnings and facades which stood in stark contrast to the monochrome landscape. “The whole neighbourhood was white and beige,” laughs Marcello, of Antoine et Lili Déco. “We arrived with fuscia-pink, yellow, green…”

Indeed, in 2000, soon after the purple awning of the groundbreaking wine bar Verre Volé popped out on the corner of Rue de Lancry and Quai de Valmy, across the canal from the Hôtel du Nord, the vast orange facade of Artazart design bookstore appeared just up the quai from Prune and its bright red canopy.

“We really brought a cultural dimension that was fundamentally important for people living in a neighbourhood,” says L’Atmosphère’s co-founder, Carl Huguenin.

Film director Jean-Pierre Jeunet also gave the area a boost, when he chose the Canal Saint-Martin as the location for the famous rock skipping scenes in his whimsical 2001 smash, Amélie.

Over the years since, the Canal Saint-Martin neighbourhood has grown ever more popular, eventually becoming inextricably associated with the term ‘bobo’, which journalist David Brooks coined in 2000, to describe the new young, bourgeois-bohème, types who were flocking to live and work there.

“Soon the media was calling us the ‘le quartier général des bobos’,” recalls Christophe of Chez Prune. “Everywhere it was ‘the bobos of Eastern Paris’, ‘les bobos du Canal’.”

The buzz perhaps reached its height in 2006, when Elle magazine named the freshly-renovated Hôtel du Nord the hippest spot in Paris. Soon after, upscale fashion shops such as agnès b and The Kooples opened just along from Chez Prune.

“The neighbourhood has truly, radically changed,” says Artazart co-founder, Carl Huguenin, who comments that, today, “we no longer talk about the new neighbourhood à la mode, it’s become recognized as neighbourhood unto itself”.

Clearly, the Canal Saint-Martin has risen to join the other historic Parisian quartiers deemed mentionable in the world’s more widely read guide books– just witness the number of tourists filing through the doors of the canal’s chic Le Citizen Hotel, which opened on the Quai de Jemmapes in 2010.

Yet the neighbourhood’s strongest allure is perhaps also what most sets it apart from other parts of the capital.

“I think people come here in search of a kind of escape,” says Marianne of Antoine et Lili. “We’re in Paris, the most beautiful capital in the world, but we don’t have the impression of being in a suffocating city, we can breathe here.”

For Gaby Benicio, co-founder of one of the year’s most talked about new restaurants, the all-woman venture Haï Kaï, which opened next door to the Hôtel du Nord in January, the area offers an air of possibility that’s unique in Paris.

“I’ve been watching this neighbourhood for years,” she says. “So many young people are coming here from all around the world, with brand new ideas. It’s still possible to do things here in the 10th, on the Canal Saint-Martin, and that’s maybe not so much the case anymore on the Left Bank. Here everything is fresh and changing.”

At the last crystal atelier in Paris, Brunella Gillet and her two female associates use machinery which has basically remained unchanged since 1890 to restore the sparkle to chipped glasses and time-stained vases. Her team also create new commissions and share their rare talents with visitors during ‘open house’ events.

Jean Brenterch perpetuates a sense of savoir-faire extending back more than a century, in the shape of Carré’s fine, hand-made ceramic tiles. With such past clients as the Théâtre de l’Olympia, Lipp brasseries in Zurich and Geneva and Jean-Paul Gaultier, his canal-side showroom unsurprisingly boasts museum-quality décors.

The heart of the Canal Saint-Martin beats on at this bar and restaurant, which is loved by cinephiles and night-time revellers alike, thanks to new co-owners Guillaume and Stéphane. Take a seat on the cosy, verdant terrace or elbow up to the charming, traditional zinc bar and soak up the atmosphere.

Previous Article 5 Things to Do in Paris This Fall
Next Article Reviewed: The Paris Diaries, The Study Abroad Experience Uncensored