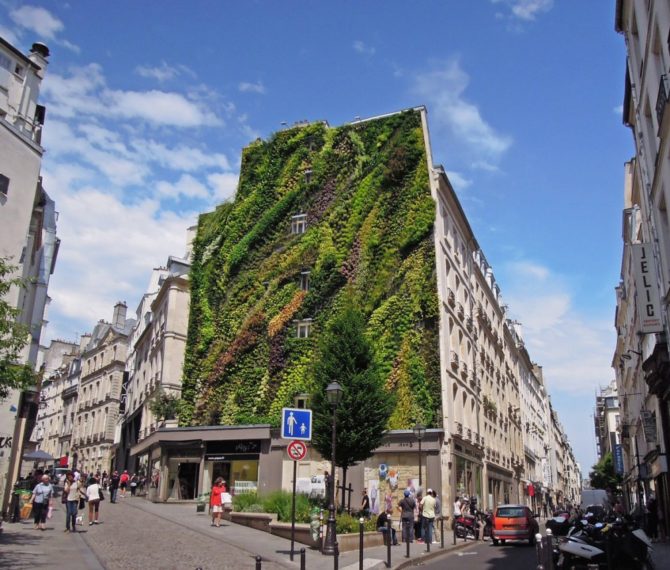 From Seoul to Sao Paulo, the vertical garden is now a ubiquitous sight in cities around the globe. It was French botanist Patrick Blanc who first pioneered the concept. After studying the soil-less plant canopies in tropical forests, Blanc introduced “Le Mur Végétal” in 1986 at the Cité des sciences et de l’industrie in Paris, and now his custom installations are sought after worldwide. Manhattanites decorate apartments with them, spas beautify their walls with them (Six Senses in Paris), as do department stores (BHV) and museums (like the Quai Branly in Paris, and the fabulous CaixaForum in Madrid). These hanging gardens serve a dual purpose—both beautifying the space and improving air quality in polluted cities. Some, like the new wall at Rubens Hotel in London, also provide wildlife habitat and prevent surface flooding by absorbing rainwater.

The latest from the design guru is a large-scale installation in Paris’s happening second arrondissement, around the corner from Frenchie’s coveted tables. Blanc began seeding the wall in April, and over the summer, visitors to the the corner of the rue d’Aboukir and rue des Petits Carreaux gazed in wonder at the lush facade. Standing 25 meters tall, the vertical garden is planted with 7600 plants representing 250 different species. For more photos, check out Patrick Blanc’s official website, and the gallery on DesignTaxi.