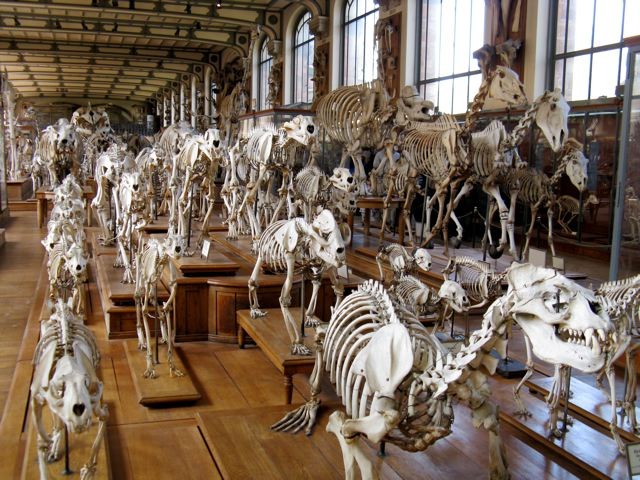 All around the Jardin des Plantes, in Paris’s 5th arrondissement, street names commemorate the pioneering men of science whose research brought the garden worldwide fame in the 18th and 19th centuries. The rues Jussieu, Tournefort and Linné are named for botanists; rues Daubenton, Cuvier and Geoffroy Saint-Hilaire for naturalists who studied the animal kingdom. The last three belong to this second part of the story when, during the French Revolution, the Jardin des Plantes—which began as the king’s garden of medicinal plants—was transformed into the Muséum d’Histoire Naturelle, adding zoology, anatomy, anthropology, geology and mineralogy to the original botany and chemistry departments.

Years before the Revolution, mathematician and biologist Georges-Louis Leclerc, comte de Buffon, attempted to catalog existing knowledge in the field of natural history in his 36-volume Histoire Naturelle. As the Jardin’s ambitious director, Buffon was the first to dream of adding a menagerie to the botanical garden. One of his successors, Jacques-Henri Bernardin de Saint-Pierre, the last intendant appointed by the king—and incidentally the author of the Romantic novel Paul et Virginie—also urged the creation of a menagerie, especially after the king’s small zoo at Versailles was pillaged by Revolutionary hordes and many animals, including a camel, were either eaten or destroyed as symbols of royal tyranny. The five animals that remained, among them a rhinoceros and a lion, were also slated for destruction when Bernardin de Saint-Pierre denounced their death sentence as a crime against science.

The animals finally obtained a reprieve, but not until after the king was guillotined in 1793, the same year in which the new Revolutionary government reorganized the Jardin with Louis Jean-Marie Daubenton as its director. When an edict banning animal shows in Paris mandated the seizure of all animals, a panther, a tiger and two eagles—along with several dancing bears and trained monkeys—joined the royal refugees at the ill-equipped Jardin. Etienne Geoffroy Saint-Hilaire, the Muséum’s newly appointed 21-year-old professor of zoology, insisted that some of the animals’ former owners be hired as zookeepers, and the menagerie was born.

By 1795 it had its first elephant, and in 1827 the arrival of the first giraffe ever seen in France set off a national frenzy. A gift to Restoration king Charles X from Mohammed Ali, Pasha of Egypt, the two-and-a-half-year-old, 12-foot-tall giraffe crossed the Mediterranean by boat, disembarked in Marseille, then walked 550 miles to Paris, accompanied by the now 55-year-old Geoffroy Saint-Hilaire, who also walked most of the way, although plagued by gout and rheumatism. Traveling an average of 16 miles a day on a well-publicized route, the giraffe was met by ecstatic crowds and charmed everyone who saw her—many a Place de la Girafe and rue de la Girafe still exist to mark her itinerary. Installed in the menagerie after being presented to the king, the giraffe, who survived the trip in fine shape, was an unprecedented sensation. Songs, poems and vaudeville skits were written about her; gingerbread giraffes could be bought in Paris parks, and her image appeared on everything from wallpaper and plates to cigar cutters and lady’s coiffures. (She lived to the ripe old age of 21, and died peacefully in 1845; her preserved form now stands in the Musée d’Histoire Naturelle in the Atlantic port city of La Rochelle.)

The early 19th century was a brilliant time for the new Muséum. Napoleon had sent the menagerie animals from all over Europe—ostriches and gazelles, leopards and lions, a polar bear and a zebra. Other specimens, living or dead and preserved, poured in from all over the world, collected by scientists in the field. Meanwhile, in-house researchers were busy describing, cataloging, theorizing, publishing and disagreeing with each other.

As early as 1800, more than 50 years before the publication of Darwin’s On the Origin of Species, Jean-Baptiste Lamarck (who invented the word biologie) was presenting his proto-evolutionary theory in his zoology lectures. In his 1809 Philosophie Zoologique he published his theory of transformisme, based on the belief that acquired characteristics could be inherited and that species gradually transmuted into other species. While supported by Geoffroy Saint-Hilaire, Lamarck was attacked by Georges Cuvier—an unfortunate situation, since Cuvier had become the Muséum’s director in 1802. A brilliant anatomist who founded the science of paleontology, Cuvier espoused the prevailing view called fixisme, believing that animal species had not changed since the Creation. Not only did he criticize Lamarck’s theory, he also refused him access to collections that would have furthered his research. The frustrated Lamarck spent the last ten years of his life blind, dictating his final works to his daughter. You’ll find a poignant reminder of this on the pedestal of his statue near the Jardin’s riverside entrance on the quai Saint Bernard. A bas-relief shows his daughter with her hand on her father’s shoulder, saying “Posterity will admire you—it will avenge you, my father”.

All of intellectual Europe entered passionately into the conflicts that pitted scientists like Lamarck and Geoffroy Saint-Hilaire against Cuvier. But scholarly pursuits were suspended in 1870, when Prussian armies besieged Paris and bombarded the museum; during the siege the elephants and many other menagerie animals were sacrificed to feed starving Parisians.

By the end of the century scientific voyages were resumed, and the great buildings that still stand in the Jardin appeared: the Galerie de Zoologie, a masterpiece of metallic architecture, opened in 1889; the Paleontology Gallery in 1898; other research buildings followed.

Inside some of these buildings today, you’ll find the results of all that collecting and classifying. The Zoology Gallery, redesigned in the early 1990s, is now the splendid Grande Galerie de l’Evolution. In the soaring main hall, a spectacular parade of animals marches triumphantly across the floor. Each one is a miracle of the taxidermist’s art: the elephants and giraffes are there, but also antelopes and anteaters, camels, wolves and hippos large and small.

On the wrought-iron galleries surrounding the atrium, you’ll find undersea creatures, birds, butterflies, shells and insects. There are whimsical touches: an elephant peering down a stairwell, a giraffe craning his neck down from the topmost gallery to survey the scene below. Endangered and extinct species inhabit a wonderful semi-dark room that also houses an enormous clock made for Marie Antoinette—still chiming the hour just as it did in the Petit Trianon in 1785. Some of the specimens here are stuffed; others, like the dodo that greets you at the entrance, are reproductions. (You’ll find a more playful dodo outside in the garden, on the Dodo Manège, a carousel where delighted children ride on dodos and other extinct and endangered species including a triceratops and a mountain gorilla.)

Next to the Grande Galerie stands the house in which both Buffon and Lamarck lived; here Thomas Jefferson, as Minister to France, was invited several times to dine with Buffon. The two had a scholarly disagreement concerning the size of American animals: Buffon thought the American climate produced fauna inferior in size to that of the Old World. To prove him wrong, Jefferson not only compiled a comparative table of American quadrupeds “from mouse to mammoth”, but also sent Buffon a sizeable panther skin and in 1787 presented the Jardin with moose, caribou, elk and deer skeletons that convinced Buffon of his error.

Behind the Maison de Buffon, the Mineralogy Gallery is scheduled to reopen this summer after a major restoration; next to it the Herbier National, home to some 10 million specimens of dried plants and open only to researchers, is also being renovated. The last great public building, the Gallery of Paleontology, contains a frightening army of bones: on the main floor, a thousand skeletons encompassing all contemporary vertebrates (even the royal rhinoceros from Versailles); on the upper floors, fossils and fossilized skeletons, some dating back over 600 million years, including dinosaurs and mastodons.

As for the living animals, they’re still in the menagerie. The elephants, lions and giraffes are gone—some went to the larger zoo at Vincennes, now closed for renovation—but camels, kangaroos, ostriches, mountain goats, yaks and Mongolian wild horses still occupy the outdoor enclosures. An Art Deco fauverie houses a few leopards and panthers; singeries shelter monkeys, marmosets and orangutans including Nénette, at 40 years old the menagerie’s oldest inhabitant and star of a recent French documentary film. Several screened volières, nearly hidden in foliage, are filled with exotic birds including peacocks, violet macaws and brilliant red ibises. Snakes, lizards and crocodiles live in the galerie des reptiles and the vivarium; darling little red pandas inhabit the Napoleonic-era bear pit. (The bushy-tailed, raccoon-like red pandas are not bears, and not related to giant pandas, although they do come from China and eat bamboo.) Service buildings are disguised as fairy-tale cottages with thatched roofs.

Some of the enclosures, including the Rotunda—the oldest building, where the original giraffe once held court—stand empty today, more candidates for renovation. The entire menagerie is a bit of living history—an old-fashioned zoological garden as interesting for its architecture as for its inmates. But the children crowding excitedly in front of the baby camel or the boas and pythons don’t care that this is one of the world’s oldest public zoos. They, and their parents, are doing what Parisians have been doing for more than three centuries: marveling at the world of wonders that grew out of Louis XIII’s garden of medicinal herbs.

Originally published in the July/August 2010 issue of France Today