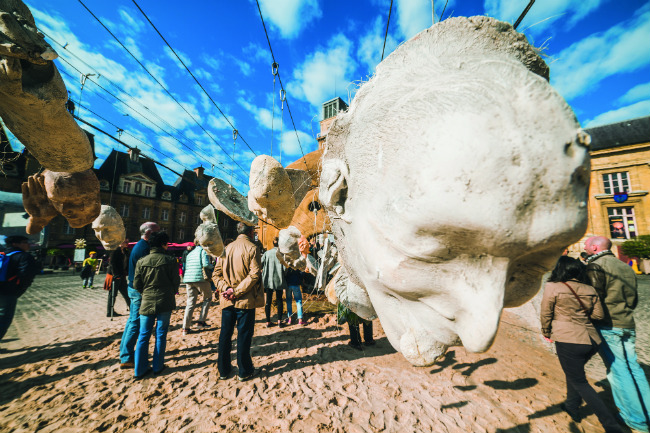 Every two years, the Ardennes city of Charleville-Mézières stages one of the biggest puppet festivals in the world. Dominic Bliss had to pull some strings to get there, but soon discovered a rich – and sometimes bizarre – theatre culture

You know how stage performers recruit unwilling members of the audience, cajoling them into taking part in the show? That’s just what happened to me. There I was, in one of the city squares in Charleville-Mézières, innocently watching a cabaret puppet show. Like everyone else, I was chortling at the female performer as she pranced about to disco music on the cobbled pavement, dressed in not much more than burlesque underwear and a bowler hat. It’s my fault really. For a split second I caught her eye and, before I knew it, I was being thrown around the cobbles as her inept and reluctant dance partner. Embarrassed beyond belief, and now the butt of the audience’s mirth, I prayed it would all be over in seconds. But no, I must have been on that street corner for almost ten shameful minutes before the burlesque dancer finally let me skulk away. 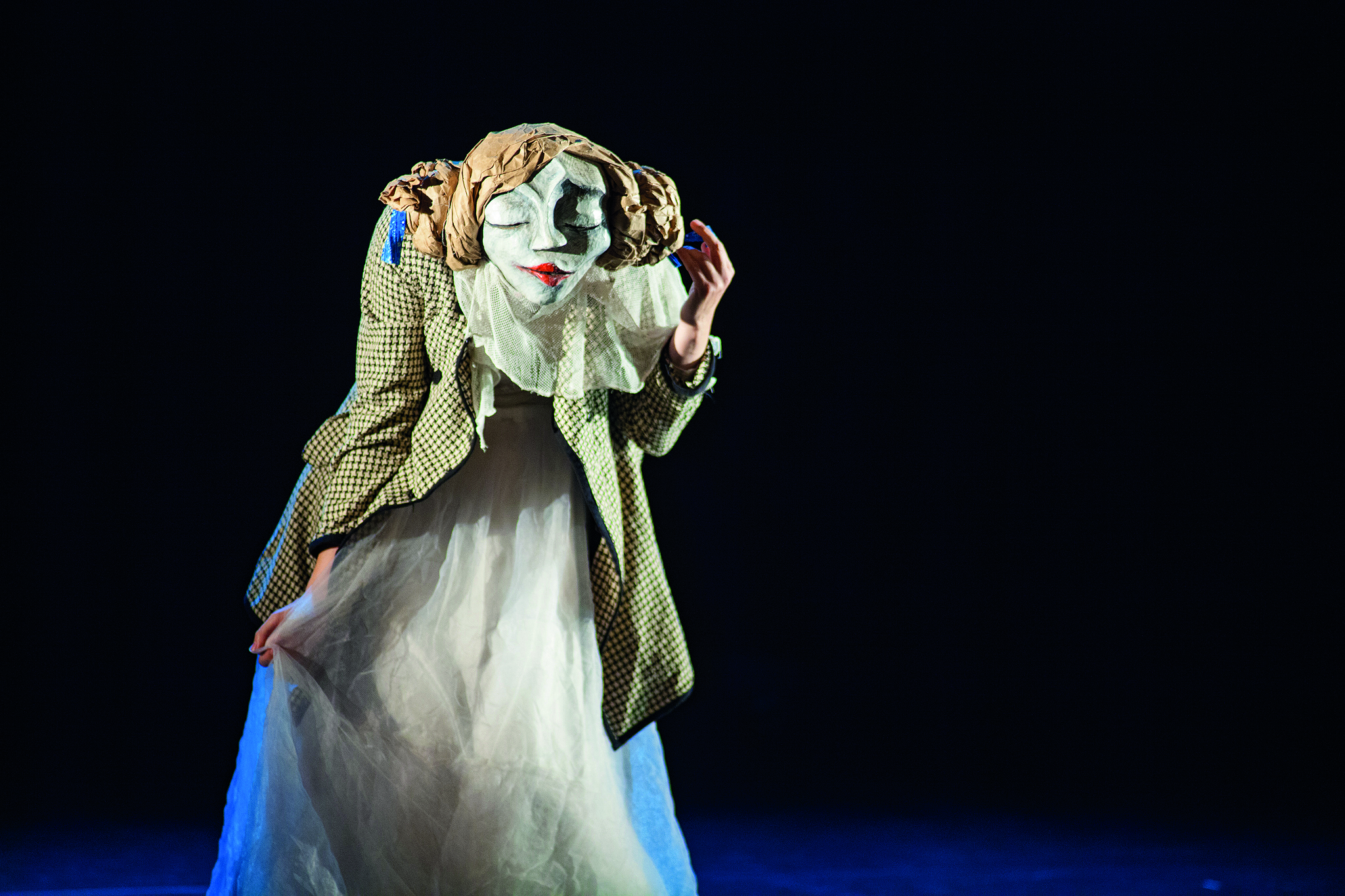 One of the puppets in the slapstick “Une Carmen en Turakie”

Everywhere you look in this Ardennes city there are puppeteers putting on their street theatre. It’s all part of the Festival Mondial des Théâtres de Marionnettes (FMTM), a biennial nine-day puppet event that, in a good year, attracts more than 150,000 visitors. The outdoor street shows (known as Festival OFF) are the informal bit. More important are the 120 or so ticketed professional turns at the various theatres, halls, churches, gyms and courtyards dotted around town.

The first Charleville-Mézières puppet festival took place back in 1961, the brainchild of the late Jacques Félix, an amateur puppeteer who decided to set up a celebration of his favourite art form in his home city. Once the festival had grown in popularity, in the same city he later founded the Institut International de la Marionnette and then a puppetry school. 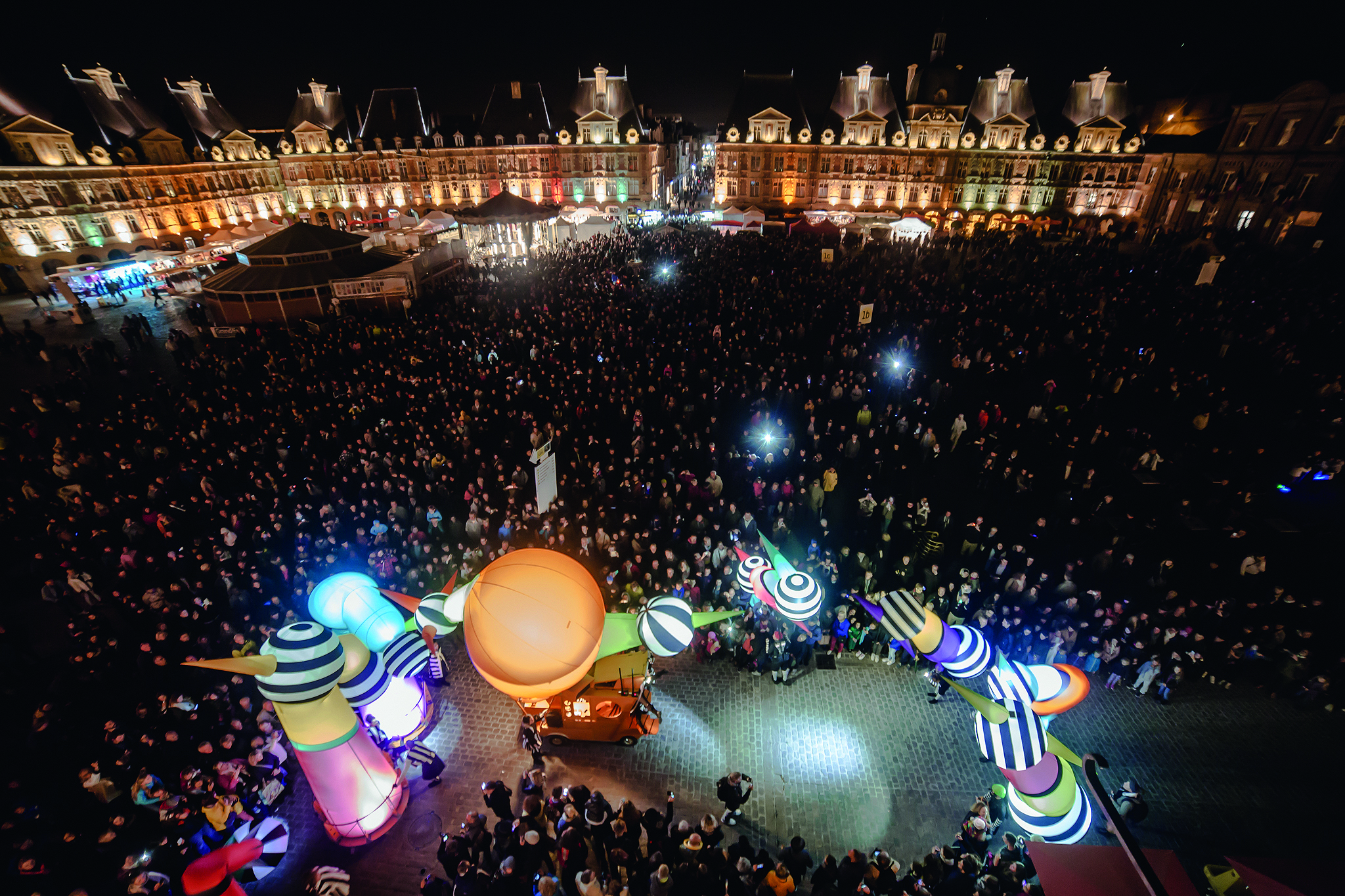 The handful of shows I attended during my three-day visit couldn’t have been more varied. At a temporary, and very chilly, outdoor theatre in the south of the city I saw a highly entertaining musical about a Soviet filmmaker forced by Stalin to portray Ivan the Terrible in a sympathetic light. At a theatre a few miles beyond Charleville (the festival is so popular it’s been forced to seek out new venues in the suburbs), I saw four actors manipulate a single puppet for a story about an Italian shepherd who ends up working on the doomed Titanic. In one of the city’s churches I witnessed puppeteer Renaud Herbin (he’s considered a master in his field) deliver what seemed to be some post-apocalyptic allegory via a string puppet on a bed of wet gravel.

Amid so much wheat, there is inevitably going to be some chaff. At the city’s Hôtel de Ville, I endured the 40-minute-long Saga de Sibelius, with its cringingly bad dancing, appalling mime and gloved hands-cum-swan puppets. 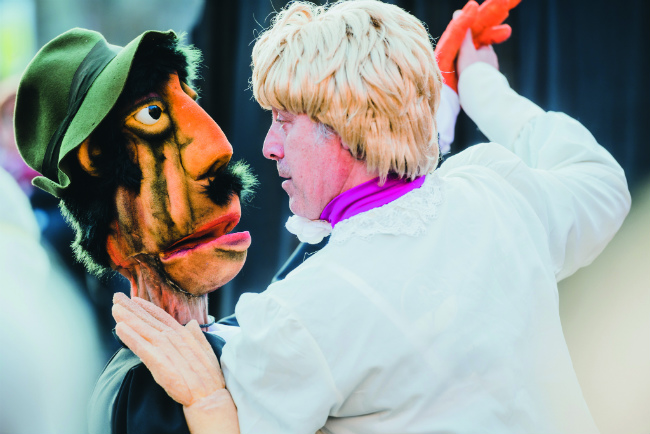 The highlight of my visit was at the Théâtre de Charleville-Mézières, where I saw a gloriously slapstick musical called Une Carmen en Turakie. A mix of opera, live music, animated film, dancing, comedy and highly inventive prop work (a folding bed turned into a cage, a bicycle wheel served as a table, ironing boards doubled up first as fighting bulls and then as slide guitars), it entertained the audience to a standing ovation. 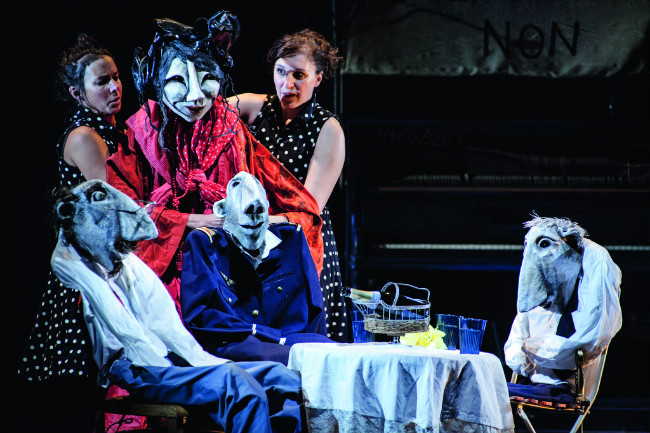 Puppetry is a fairly niche form of theatre, but one with a rich and varied history. Depending on your definition of what puppets are, it’s said their history can be traced back as far as 30,000 BC. In her book Puppetry and Puppets, Eileen Blumenthal suggests the earliest puppets may have been symbols of human fertility. “Cro-Magnon men or women carved tiny, voluptuous figurines out of soft stone or the bones or tusks of animals,” she writes. 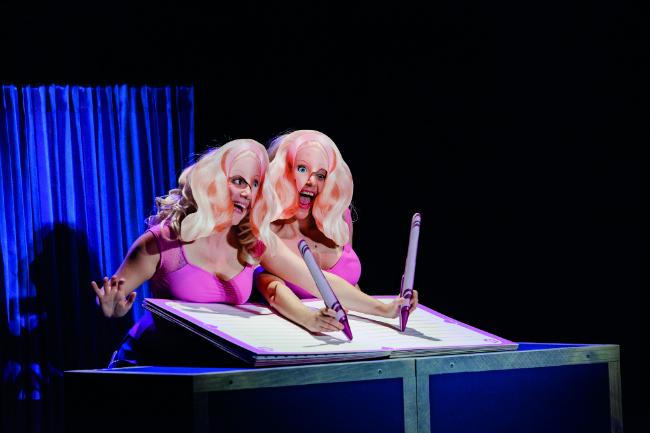 Blumenthal believes the earliest record of a puppet actually performing is around 20,000 BC, in the Nile Valley. Fast forward to the 5th century BC and the Ancient Greek historian Herodotus mentions the art form in his writings. But it wasn’t until the Middle Ages that puppetry really took off as a popular art form.

In the Western World there are six main types of puppet: hand or glove, where puppeteers’ fingers move inside the puppet’s head or arms; marionettes, which are manipulated from above by strings or sticks; rod puppets, controlled from below by rods; body puppets that completely envelop the puppeteer; bunraku-style dolls, handled by visible actors on the stage; and, finally, shadow puppets, where shadows are cast onto a screen on which the audience watches the show. 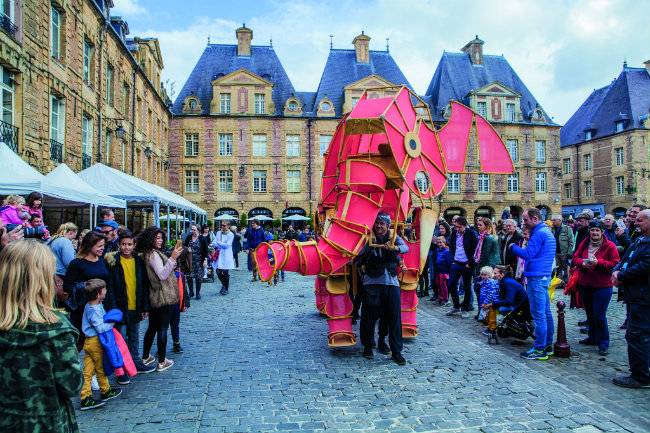 Like many of their niche art forms, the French take puppetry very seriously indeed. It’s unlikely you’d get 150,000 Brits turning up in damp weather to watch performers pull strings and insert gloves up fabric behinds. We Anglo-Saxons tend to see puppetry as entertainment for children (think Punch and Judy, Sooty and Sweep, Basil Brush), or else we mine it for comedy (Spitting Image or the Muppets).

When we do play it straight (remember the 1960s sci-fi series Thunderbirds or the 1999 Hollywood film Being John Malkovich), it ends up feeling more than a little creepy; or else it descends into camp horror, as in Chucky, from Child’s Play. 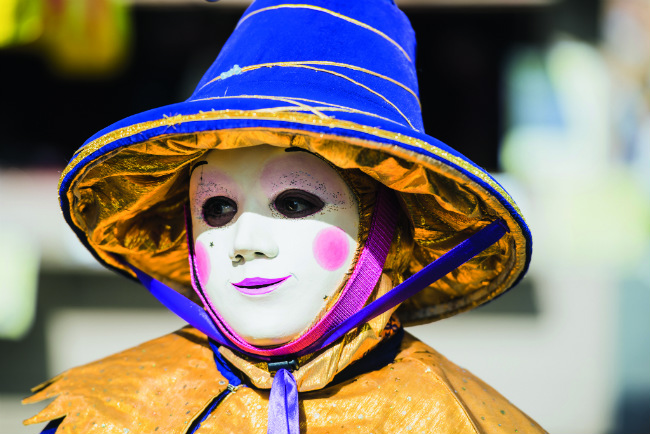 Charleville’s FMTM has plenty of comedy, horror and kids’ puppetry. Yet its mainstream shows are unashamedly high-brow. Interestingly, some of them feature very little puppetry at all.

At times I was left wondering if some of these artists weren’t simply mainstream stage actors using a token amount of puppetry in order to qualify for inclusion in the festival. As one actor told me: “Really there is no difference between a puppet and a human actor. Both are forms of manipulation.” 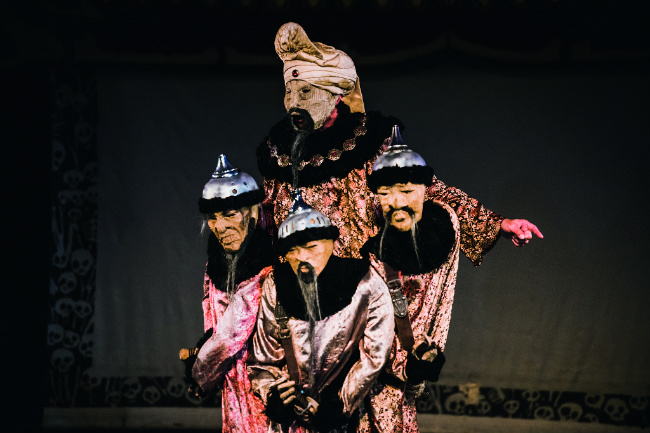 Anne-Françoise Cabanis, who took over as festival director after Félix’s death, agrees: “It’s not strictly about puppet theatre, so much as theatre that includes puppets.”

She bridles, however, at the suggestion that puppet theatre is just for children or specialists. She wants to open up the art form to all types of spectators by offering every feasible style of puppetry. 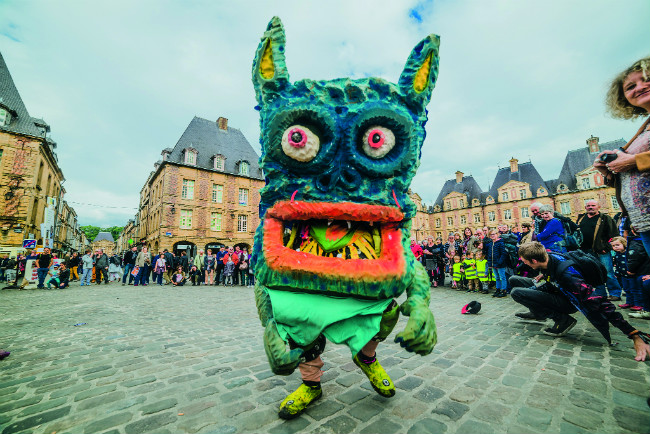 Her tactics certainly look to be working. This year, there were 110 touring companies in attendance at the FMTM. Yes, the vast majority of these were Francophone, but there were also representatives from Germany, Spain, Japan, Brazil, Poland, Italy, the Czech Republic and Finland. Shows were performed in English, Japanese, Mandarin, Hindu, Punjabi, Finnish, Greek, Hebrew, Slovenian, Indonesian and Sudanese. An even greater number were staged without any dialogue at all.

“Right from the beginning, the plan was to open the festival up to foreign puppeteers,” Anne-Françoise explains. “To help different cultures, different aesthetics, different techniques, and to help puppeteers from loads of different countries to exchange ideas.” 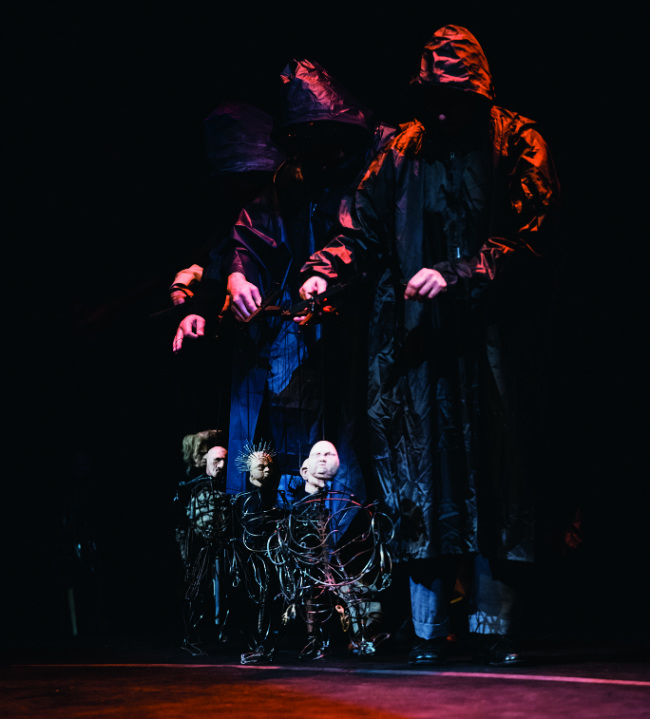 The problem is that Charleville-Mézières is a small city – under 50,000 inhabitants in over 31 square kilometres. The festival already block-books 35 indoor venues around town, and offers over a thousand performance spots in outdoor parks and squares and on street corners. “I don’t know how we could fit in any more acts,” laments Anne-Françoise.

Wander the cobbled streets, and you’ll understand what she means. Virtually everywhere you look there are puppeteers plying their trade – some highly professional, others charmingly amateurish. 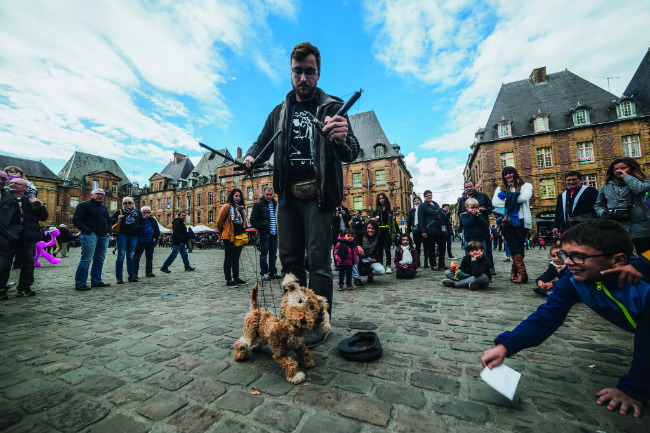 I saw some bizarre sights: like the three men on Place Ducale inside a huge red elephant made of red canvas and bamboo; or the two women outside Bar Le Tennessee, manipulating old-man puppets, with their arms in the puppets’ sleeves and their legs in their trousers; or the man in a Clint Eastwood poncho operating a flatulent puppet ostrich with more than a passing resemblance to the late Keith Harris’s Orville the Duck; or the old chap with dreadlocks and a beard, and two puppets mounted on his bicycle.

For a while I chatted with a British puppeteer whose act involved sitting inside his own rucksack and operating a pipe-playing, Mohawk-haired puppet called Jolly Rotten Punk. 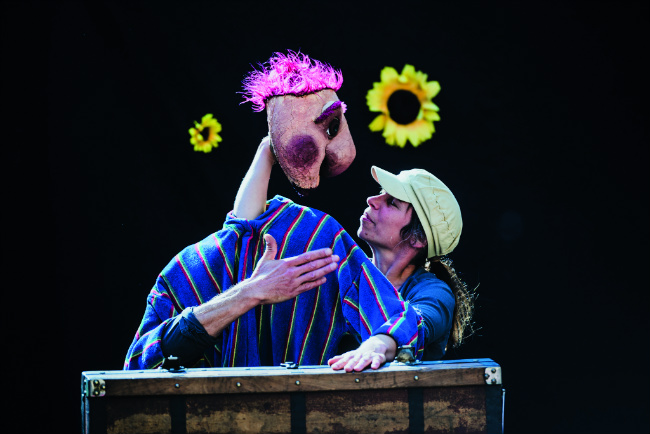 And then, I was rudely press-ganged by the aforementioned burlesque disco dancer who was wearing underwear and a bowler hat. At one point, she forced me to put on a reversed overcoat so that I was trussed up as if in a straitjacket, my arms pinned to my side. She then stood behind me and engineered it so that her arms slotted beneath my armpits and effectively became mine. I was now helpless as she used her hands to wipe my face, scratch my ears, pick my nose, even feed me a banana.

She had turned me into her very own puppet.

The next Festival Mondial des Théâtres de Marionnettes is in September 2019. Website: www.festival-marionnette.com. Dominic Bliss travelled from London to Charleville-Mézières by train through Voyages-sncf UK. Fares start at £107 return. Visit www.voyages-sncf.com or call 0844 848 5848 for bookings. 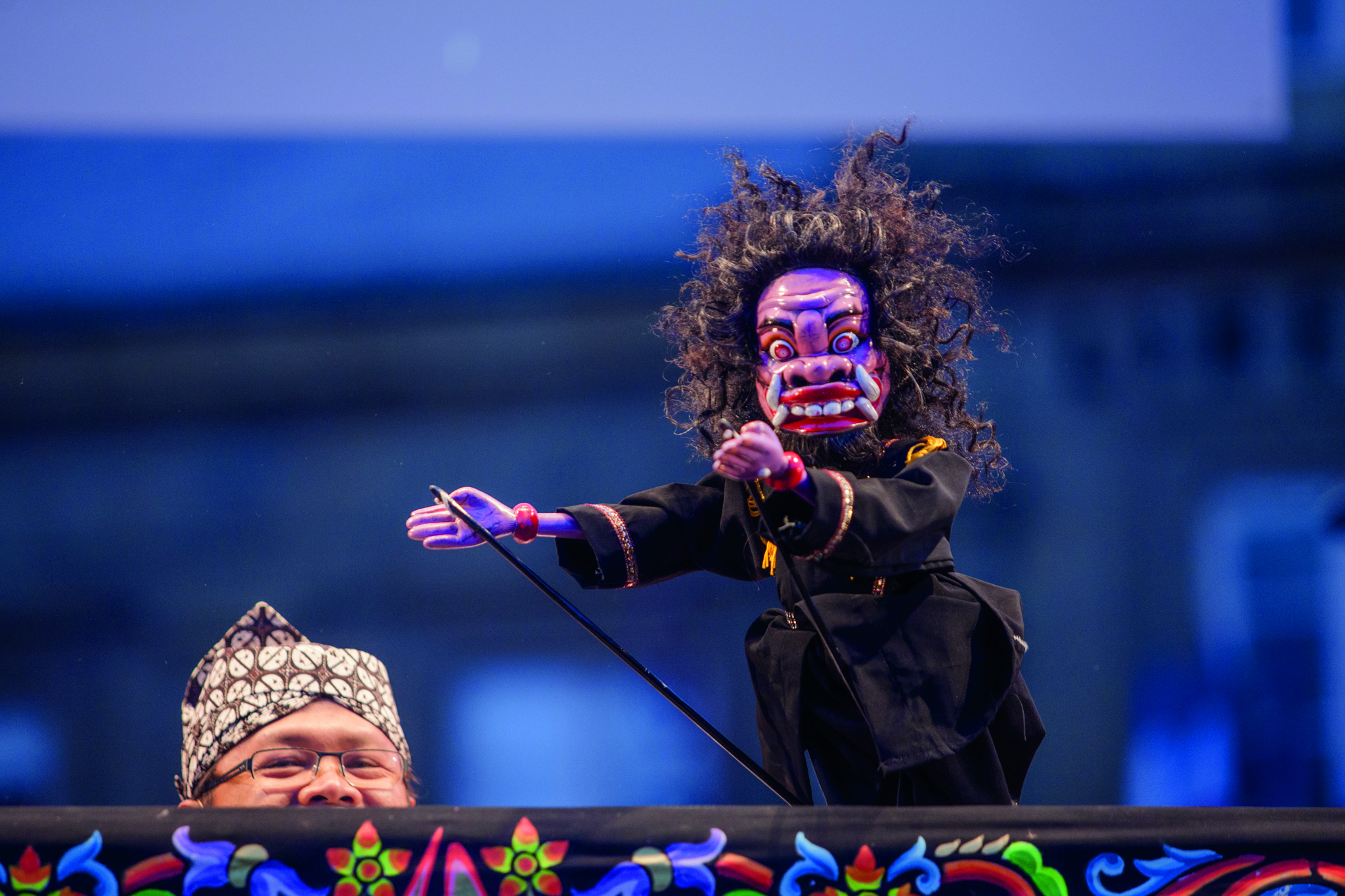