Singular Signature Scents: A Guide to Perfume in Paris 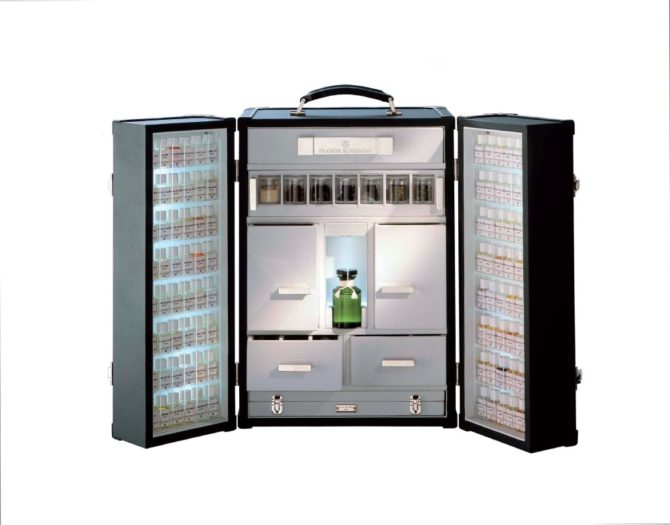 The glittering brand names in French perfume—Chanel, Dior, Guerlain and so many others—are now sold all over the world, but scent shopping in Paris can still be a singular experience, when nosing out the city’s rare, custom-made and niche fragrances. Whether for men or women, the names and flacons of these unusual perfumes can be as enticing as the scents themselves, like Promise of Dawn or Bolt of Lightning, or the name you invent for a fragrance designed to be yours alone.

Francis Kurkdjian, a pioneer of custom perfume creation in Paris, is renowned as one of the most brilliant and innovative noses in the industry. Kurkdjian, a suave-looking Frenchman of Armenian descent, enjoyed phenomenal success at the age of 25 with his first fragrance, the iconic men’s cologne Le Mâle, for Jean-Paul Gaultier. After impressing the olfactory elite with other best-selling scents including Narciso Rodriguez’s For Her, Acqua di Parma’s Iris Nobile and Dior’s Eau Noire, the rising star cemented his reputation by winning a Prix François Coty, the perfumer’s Oscar.

Other highlights along Kurkdjian’s way include filling the fountains at Versailles with scented soap bubbles, re-creating an 18th century perfume worn by Marie Antoinette and reproducing the “smell of money” commissioned by French installation artist Sophie Calle. That career resumé would be reason enough to book a private consultation with Kurkdjian. But his made-to-measure perfumes also start at €8,000, as opposed to starting prices of some €30,000 or more at Cartier or Guerlain.

When working on a project with a private client (70% of whom are women), Kurkdjian insists that the initial consultation happens on the phone. “That way I’m not distracted by any visual influences,” he says. “I can get closer to the essence of who a person is.” Questioning his client about what type of odors they like and what memories these smells evoke for them, he goes on to construct a “perfume map” that will guide his later experimentation. “Being a perfumer is a bit like being a magician,” he says. “It’s about realizing your vision of someone else’s emotions.” Briefs given by clients can range from vague ideas—the feeling of walking barefoot through wet grass, for instance—to specific requests: one American gentleman asked the perfumer to re-create the smell of his Bentley. No matter the request, Kurkdjian always works the same way, filling a notebook with observations and drawings, like a storyboard. It’s only after creating a back story, he says, that he begins thinking about ingredients to use.

Once he has drawn up a general palette of his client’s fragrance preferences, Kurkdjian sets up a face-to-face meeting. He inevitably turns up at this appointment with his “nomadic laboratory”, a 33-pound green leather steamer trunk custom-made for him by French luxury leather-goods craftsman Fred Pinel. The trunk is filled with all the traditional tools of the perfumer’s trade, including electronic scales, pipettes and blotters, together with raw materials and essential oils best suited to his client’s taste. “It’s like a Pantone color chart,” Kurkdjian says. “If your client has a preference for shades of blue, you’re not going to turn up and present greens.” Kurkdjian then spends between three months and a year working on the project, sending samples back and forth to his client and tweaking his formula until he gets the custom fragrance just right. “I tread a fine line between what clients originally thought they wanted,” he says “and what I think works best as a reflection of their souls.”

Because he believes everyone should be able to “buy a little piece of the dream”, Kurkdjian has a boutique carrying not only perfumes but also scented leather bracelets, soap bubbles for children and much more.

Perfumistas who can’t afford their own copyrighted fragrance for life can still capture the sweet scent of exclusivity, by tracking down a perfume so rare, so unusual and so difficult to find that it provides their personal, almost unique sillage. (Meaning a boat’s wake or vapor trail, sillage is the elusive whiff wafting after you once you’ve passed by—a crucial concept in French perfumery.)

François Hénin, the owner of Jovoy, a gorgeous new boutique near the Place Vendôme, says he caters to clients who are “disappointed by the lack of character in mainstream fragrances” and who “yearn for the days when perfume had an essential mystique”. Although it’s as sleekly designed as a modern concept store, Jovoy has the aura of an old-fashioned perfume shop, where fragrances are sniffed from the glass stoppers of amber apothecary bottles rather than waved around on cardboard strips. Hénin could have been content to resurrect the vintage perfume house of Jovoy (founded by Blanche Arvoy in 1923), but while working on re-creations of fragrances from Arvoy’s heyday he decided to take the revival one step further. “I came up with the idea of creating a ‘temple of rare perfumes’,” he says, “bringing together twenty or so independent brands under one roof.”

Hénin is often to be found in the store himself, sharing his knowledge and unbridled passion for perfume with clients. He is an inveterate storyteller who takes obvious delight in expounding on a perfume’s history or inspiration as well as explaining base and top notes. Dabbing a hint of Casta Diva, by the Italian niche company Nobile 1942, onto the back of my wrist, he explains how the scent was inspired not just by Bellini’s classic aria Casta Diva (from the opera Norma), but by the on-stage requirements of opera singers, who have long been banned from wearing perfume during performances because of the effect it might have on the voices of the entire cast. Casta Diva’s delicate accords of frangipani, Egyptian jasmine and white musk are designed to unfold gradually, so that not a hint of fragrance would be diffused during a performance—but by the time a diva arrived back in her dressing room to greet her admirers, her scent would be in full flower.

Hénin also recounts the story behind Joséphine and Le Vainqueur, two contemporary re-creations by the historic perfume house of Rancé. Legend has it that before his coronation in 1804, Napoleon commissioned master perfumer François Rancé to create two exclusive scents—one for himself, one for his beloved Joséphine. The perfumes were designed so that when the two were in the same room, Joséphine’s fragrance would dominate. But if they moved closer together, the two perfumes merged to create a whole new fragrance. In 2004, François Rancé’s great-great granddaughter, Jeanne Sandra Rancé, revisited the company archives and re-created Joséphine, a romantic floral still surprisingly modern after all this time. But it is the men’s component, Le Vainqueur, that really haunts the senses. Close your eyes and inhale its dark, visceral notes of vetiver, musk and amber gris and it smells as if Boney himself might be standing before you in mud-spattered leather boots.

Hénin’s boutique not only stocks vintage scents by such perfumers as Maison Dorin, the historic British brand Grossmith, and L.T. Piver—a traditional French perfume house that has existed since 1774—but it also carries a number of cutting-edge contemporary creations. These include the exclusive French line MDCI and Hénin’s personal coup de coeur, Technique Indiscrète, a collection of avant-garde fragrances by Belgian couture-designer-turned-perfumer Libertin Louison. Louison draws inspiration from eclectic sources. Santa Subita captures the sensual wood, incense and myrrh aromas of Saint Catherine’s Orthodox church in Brussels while Délivre Moi, a rich mix of anise, honey and almond, began with a day in the country when Louison saved a queen bee struggling to get back into her hive.

Most fragrance fans will find their own way to classic Parisian perfume shrines such as Guerlain, Caron and Annick Goutal. To sniff out the city’s more exclusive scents, the best place to start is the 1st arrondissement, where you’ll find: Maître Parfumeur et Gantier, founded by Jean-François Laporte; Parfums de Nicolaï, whose founder and nose Patricia de Nicolaï is a member of the Guerlain family; and JAR, the boutique of Paris-based American jeweler Joel Arthur Rosenthal, whose fragrances are found only here and at New York’s Bergdorf Goodman.

Cutting-edge scents by Mark Buxton and Le Labo, among others, can be sampled at the perfume counter at Colette. A few doors away, the trendy Hôtel Costes is the only place in the world to find perfumer Olivia Giacobetti’s ultra-niche line IUNX.  And no Parisian perfume pilgrimage would be complete without a visit to the legendary Salons du Palais-Royal Shiseido, Serge Lutens’s opulent HQ, which has attracted a cult following since its opening in 1992. International fragrance connoisseurs flock here for Les Exclusives, Lutens’s non-export fragrances that can be bought only at the Paris boutique, or by mail order for shipping to a limited number of countries.

Frédéric Malle’s Editions de Parfums is so called because Malle plays the role of an editor, “publishing” unique fragrances by renowned perfumers who are given carte blanche to create the individual perfumes of their dreams. Once found only at Malle’s original Paris boutique in the 7th arrondissement, his fragrances are now available in select outlets around the world, including Barney’s New York stores across the United States; a limited choice is also available online.

One of the stars in Malle’s portfolio of perfumers, Jean-Claude Ellena, is the official nose at Hermès; in 2000 he joined with his daughter Céline to launch The Different Company. Showcased in a tiny boutique in the Marais, the father-daughter team’s sophisticated and beautifully packaged fragrances are designed to be unisex.

Those looking for more subversive scents should drop into another independent Marais parfumerie, Etat Libre d’Orange, a niche perfume house founded by Etienne de Swardt, a marketing maverick who, like Malle and MDCI, has assembled a dream team of perfumers including Antoine Maisondieu (the grandson of the Nobel Prize-winning author and philosopher Albert Camus). The company specializes in provocative accords and taboo-breaking names, and while the bottles are a little too risqué to make gifts for conservative friends, you’re unlikely to encounter too many other women wearing Jasmin et Cigarette. With fragrances like these, your own signature sillage is pretty much guaranteed.

You can also find fine perfumes at:

Previous Article Juan-les-Pins: La Passagère
Next Article Back to the Future: Super-ette