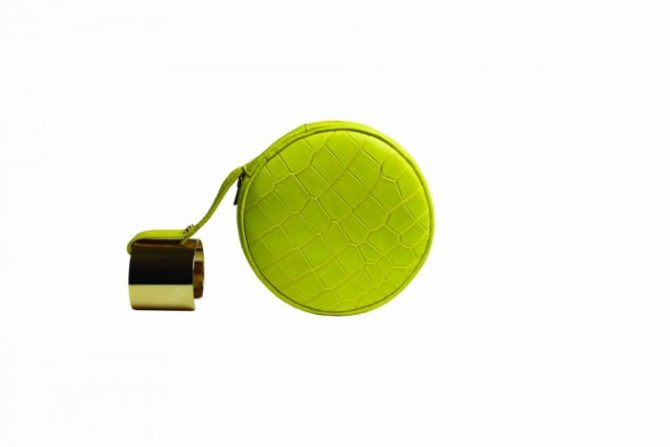 If we tally the evidence, stylish Parisians may just be distancing themselves from the ‘status handbag’, in favour of something a bit more expressive of individual flair. Two brand new boutiques* – one from a century-old artisan glove and leather goods maker, the other by a spanking new and wildly promising brand – are redefining the look, feel and maybe even the purpose of the designer bag.

Now in its fifth generation as a family-owned business, Maison Perrin fashioned its first pair of kid gloves during 1893, in Saint Junien, a historic glove-making centre near Limoges. At the height of the brand’s popularity in the 1920s, Perrin had boutiques worldwide. But the demise of the glove as a wardrobe staple decimated France’s gantiers, narrowing the field to fewer than a couple dozen survivors who still preserve the industry’s age-old techniques, which require dozens of steps and a slew of skilful artisans in order to create a single pair of gloves.

However, Perrin managed to hold on, by producing high-end models for haute couture houses, until the late 1970s, when they finally shuttered their doors.

In 2006, the Perrin family relaunched the company with a totally new look and an expanded line-up, adding luxury handbags and sunglasses alongside updated versions of their handmade gloves. With decades of expertise to back them up, the family kept the major operations in-house and hired skilled artisans from the likes of Hèrmes to make their handbags, which are designed by the family matriarch, who is also the brand’s artistic director.

Sited on the tiny Rue d’Alger, just a stone’s throw from the Jardin des Tuileries, in the heart of Paris’s upscale Rue Saint-Honoré shopping Mecca, the new Perrin boutique is an opulent affair. The gleaming, pale-lacquered shelves offset the sumptuous bags made from luxury skins and the velvety, meticulously tailored gloves.

Structured yet with a dose of whimsy and humour, the ‘hand-in-glove’ theme, a nod to Perrin’s origins, extends to the sleek clutch bags – never has the term been used so aptly – which come with a built-in leather or metal glove, or attach to the wrist with a wide cuff bracelet. The options include an adorable version in rosy, fox-covered leather which resembles a giant powder puff. This cheeky innovation serves the dual function of giving the hand a place to rest as well as providing added security. Perrin thus solved the clutch’s unspoken issue – how do you comfortably hold one? Until now, you didn’t…

The superb ‘Ball’ bag recalls the structure, sex appeal (and vague hint of bondage) exuded by Azzedine Alaïa’s glorious ‘Bandage’ dresses from the late 1980s and early 1990s. The bag is surprisingly versatile, given the space limitations of its rounded shape, and appealing in all of its three sizes, but for surprisingly different reasons. The largest model, in soft, forest-green crocodile, is an absolute knockout for daytime, while a petit version in gleaming black stingray could work at any ‘red carpet’ event. As you’d expect, Perrin’s gloves are gorgeous. In softest calf they fit like – well – a second skin, while the light, supple crocodile versions are this season’s standout.