First published: May 18, 2015 by Alexander Lobrano 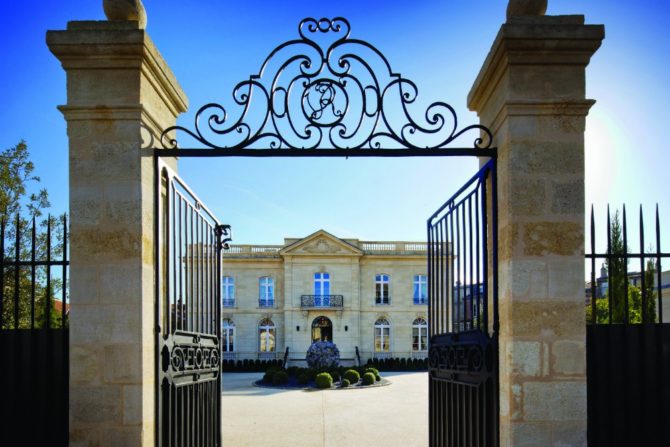 The opulent, Napoléon III-style dining room of an elegant 18th-century limestone mansion in a quiet residential district of Bordeaux has become the most talked about address in the city since it opened last December. La Grande Maison is a joint project between winemaker Bernard Magrez, one of France’s most famous vignerons and the owner of La Grande Maison, Joël Robuchon, who placed one of his most talented sous chefs, Japanese-born Tomori Danzaki, in the kitchen to execute his menus.

Unsurprisingly, it immediately became popular with local wine merchants, but though the food is outstanding, dining in this pair of plush rooms – with their Baccarat crystal chandeliers, and velvet-covered banquettes and chairs at white-linen-covered tables – is a very formal experience that may be improved by a warmer, more relaxed serving style.

The menu proposes a variety of dishes for two à la carte, including roasted guinea hen and a veal chop, both of which are carved tableside. The best way of discovering this kitchen, however, is the tasting menu, which will evolve according to the seasons, but always begin with an hors d’oeuvre. The night I was there, this consisted of a beautiful dish of crab aspic and a medallion of crab meat topped with caviare from the Sologne region, followed by a choice of four different ‘trio’ tasting plates which included mini versions of some of Robuchon’s signature dishes. Among the possible cameos are a single truffled langoustine with green cabbage, a scallop with a herbal jus, olive oil and squid’s ink farfalle pasta, and a tiny, freshly made goat cheese-flavoured soufflé with truffle cream.

If the starters were pleasant, what I really enjoyed was the main course, a chateaubriand of beef topped with a large lobe of duck foie gras – a riff on tournedos Rossini – which was carved tableside and came with a reduction of Port, Robuchon’s famous potato purée and a small serving of pommes soufflé or puffy slices of deep-fried potato. The impressive cheese trolley is stocked from Alos, Bordeaux’s best fromager, and the meal was concluded by a caramel soufflé with citrus sorbet. Book as far in advance as possible.