Step Back in Time in Gers 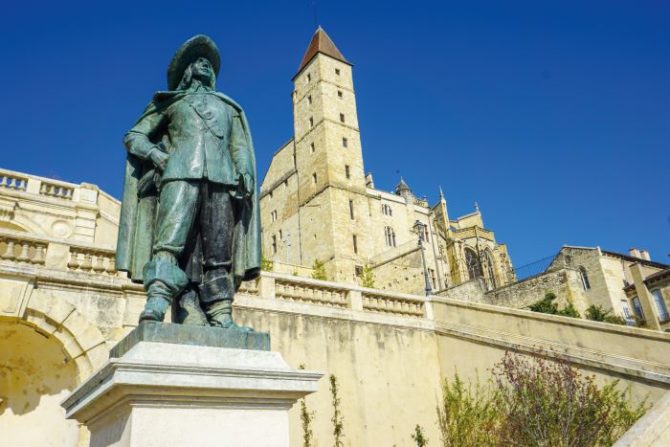 Home of the legendary Musketeers, Gers lies at the heart of historic Gascony. Gillian Thornton explores this rural département, rich in heritage and tradition.

Whichever way you look at it, the perched community of Lectoure packs a pretty picturesque punch with its narrow streets, elegant stone houses, and imposing cathedral tower. But when seen from the air, this historic Gascon village is even more dramatic.

I’m tucked snugly inside the basket of a hot air balloon, watching the rooftops of Lectoure diminish as we rise smoothly up over the autumn fields. Below us, the evening shadows lengthen as the sun sinks behind us over the Pyrenees. A hare flees across the stubble. Children stop their games to wave. And in every direction, the landscape of rural Gascony looks to have changed little since the earliest days of air travel. 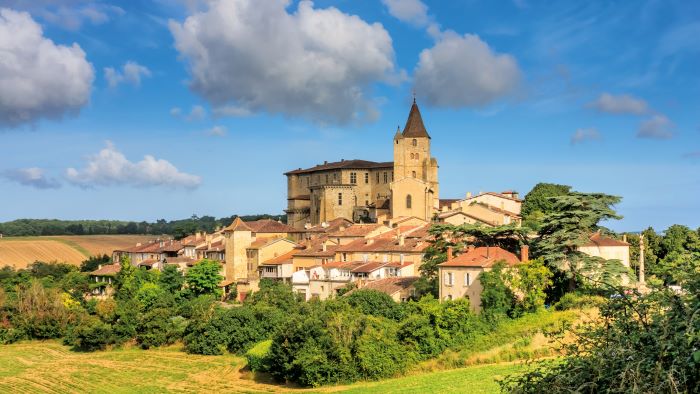 This historic province once covered a substantial triangle in the deep south-west of France. Bordered by the river Garonne, the Atlantic coast, and the Pyrenees, this patchwork of landscapes ranged from the sandy coast and flat terrain of the Landes to the verdant foothills of the mountain frontier.

In 1152, the marriage of Eleanor of Aquitaine to the future king of England, Henry II, brought Aquitaine and Gascony under British rule. But the area was to change hands many times during the Hundred Years War between England and France, finally reverting to France in 1453. Today Gascony straddles eight different départements across the modern regions of Nouvelle-Aquitaine and Occitanie, but the name lives on, especially in the Gers département, widely considered to be the heart and soul of this ancient region. 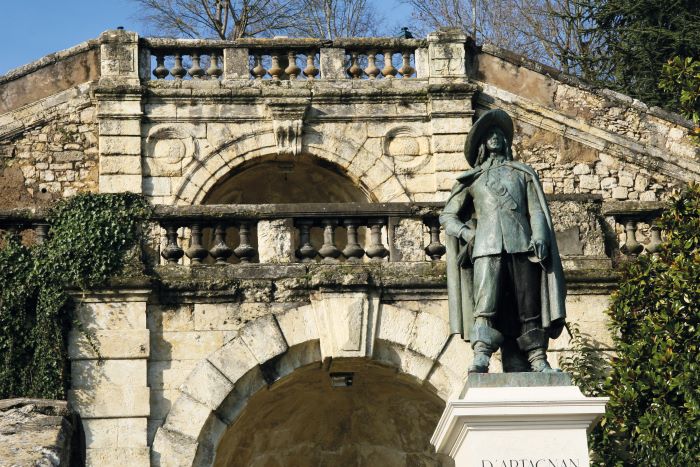 The statue of d’Artagnan in Auch © shutterstock

Author Alexander Dumas put Gascony on the world’s literary map, thanks to his stirring tales of D’Artagnan, swashbuckling hero of The Three Musketeers. In reality, the captain of Louis XIV’s musketeers was born Charles de Batz de Castelmore in Gers in 1611, and later became Count d’Artagnan. He loyally served his king until he was killed at the Siege of Maastricht in 1673. The musketeers’ motto ‘All for one and one for all’, so beloved of Hollywood movies, still epitomises all that is best about courage and comradeship. 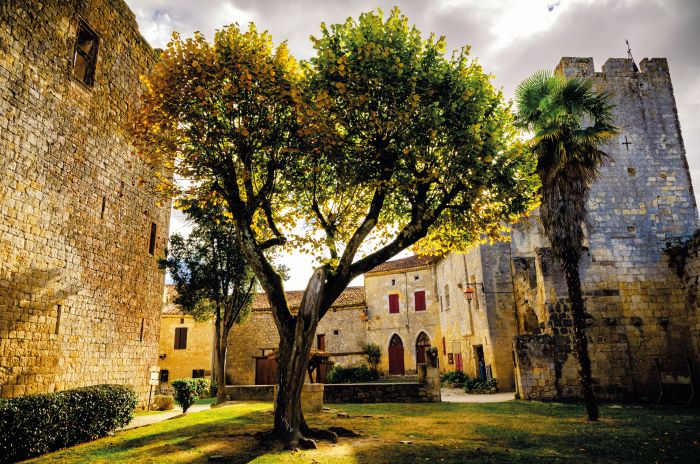 One of France’s least populated landscapes with a population of less than 200,000, Gers is still heavily agricultural, yet barely an hour’s drive from the aerospace city of Toulouse to the east. And for all its rich history – the perched villages and historic abbeys, the bastide towns and Roman remains – Gers certainly isn’t stuck in a time warp. This is an area with one foot in the past but its eyes firmly on the future. 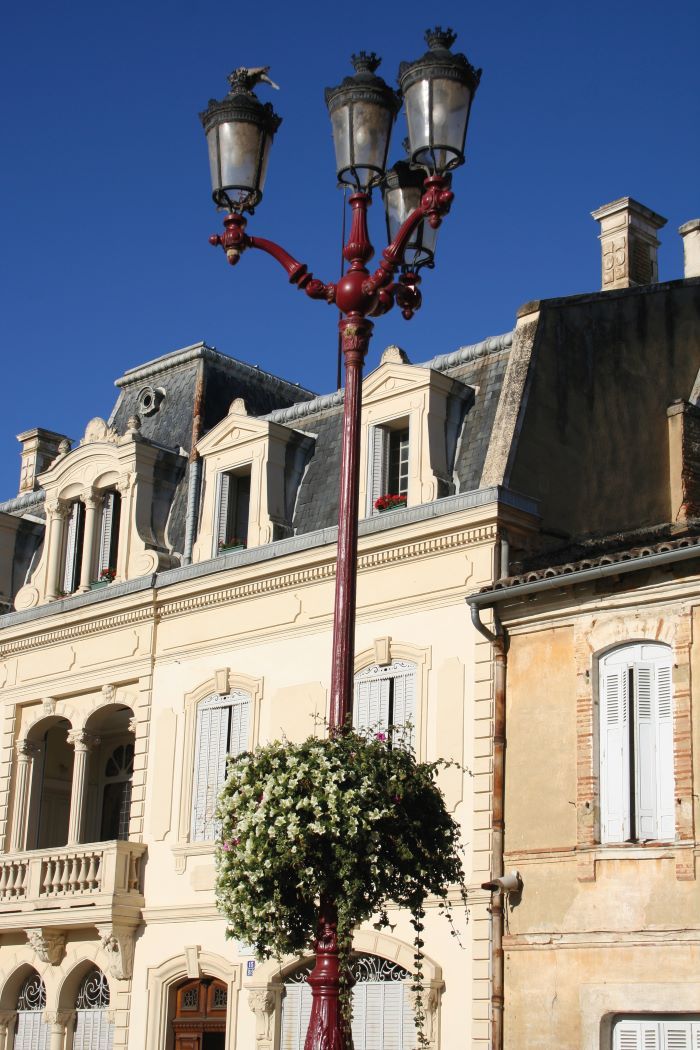 Don’t expect to find big cities in Gers – Auch, the county town and Gascon capital, has barely 23,000 inhabitants – but Gers is far from being a cultural backwater. The deep south-west of France may not be the first place you’d expect to find gems of Latin-American art, but the Musée des Amériques in Auch is a must-see for culture vultures, having reopened in 2020 after major refurbishment. The collection started with artefacts brought back from Latin America by local archaeologist Guillaume Pujos in 1896. Today it is the second most important collection of Pre-Columbian art in France after the Musée Quai Branly-Jacques Chirac in Paris. 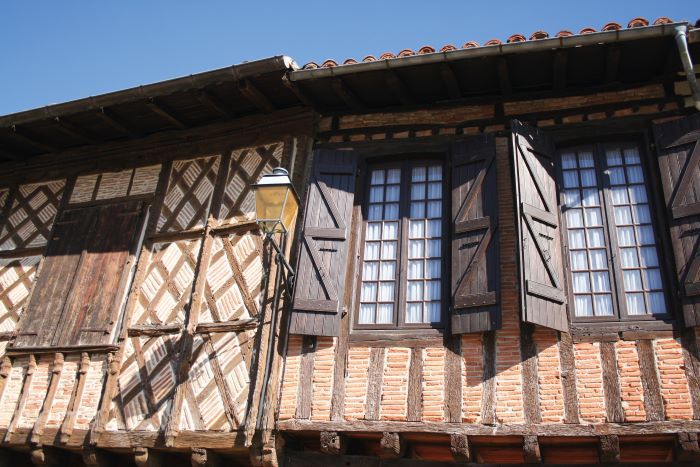 Listed by UNESCO as a major stop on the pilgrims’ trail to Saint-Jacques de Compostelle, Auch is dominated by the imposing cathedral of Sainte-Marie and the adjacent Armagnac Tower, a lofty 14th-century prison. Behind the church, the Great Staircase, which was completed in 1863, connects the upper hilltop power centre of the town with the river and tradesmen down below. An obligatory selfie spot comes on the mezzanine landing, where a striking statue of d’Artagnan stands proudly, with head held high and hat at a jaunty angle.

If Latin American art comes as a surprise, Auch also has another trick up its sleeve – the circus. It is known as Circus City for its participation in this specialist branch of the performing arts: a former military barracks has been transformed into a centre for circus training and the annual October festival brings professionals and public from far and wide. 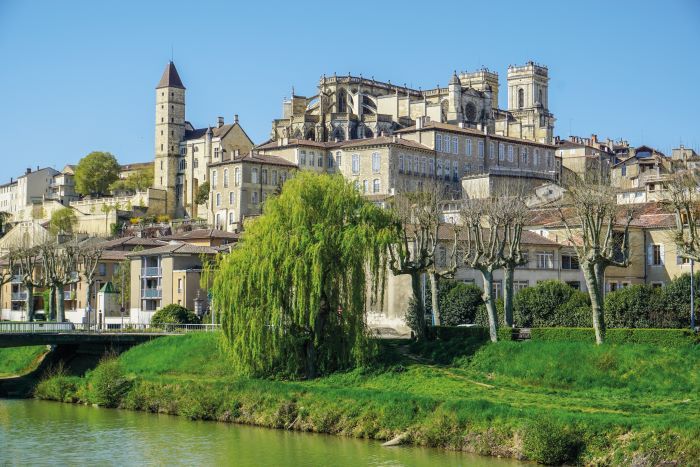 Whilst Auch sits strategically in the centre of the département, Condom lies to the north, on the border with Lot-et-Garonne. This small town has an important ecclesiastical past, thanks to its position on the Via Podiensis from Le Puy to Saint-Jacques de Compostelle. West of the town, the UNESCO-listed Pont de Lartigue was built in 1724, one of the last Romanesque bridges created to carry the pilgrims. 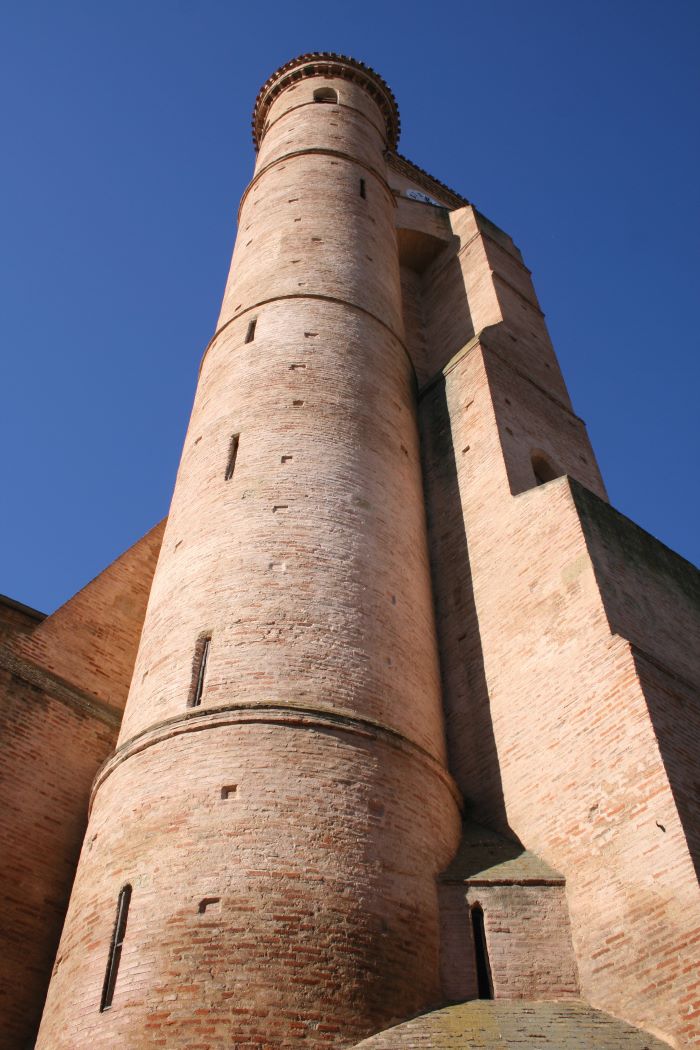 Forget the schoolboy jokes. Condom isn’t funny to the French, the name of the town coming from Condatomagus, a market place at the junction of two rivers, the Baïse and the Gèle. Navigable since the time of Henri IV, the Baïse passes ancient towns and villages, fields and low hills as it meanders south through Condom to Valence-sur-Baïse. For the ultimate in slow tourism, take a river cruise with commentary or, better still, book a boating holiday. Trips depart from Condom and Valence, the Baïse connecting to an extensive network of navigable waterways across the south-west of France.

Don’t leave Condom without a tour of Cathedral Saint-Pierre, with its spacious cloister, nor nearby Flaran Abbey, which is now a regional arts centre. Although ravaged by the Hundred Years War and then the Wars of Religion, Condom later grew prosperous thanks to its river commerce and, in particular, the trade in Armagnac. 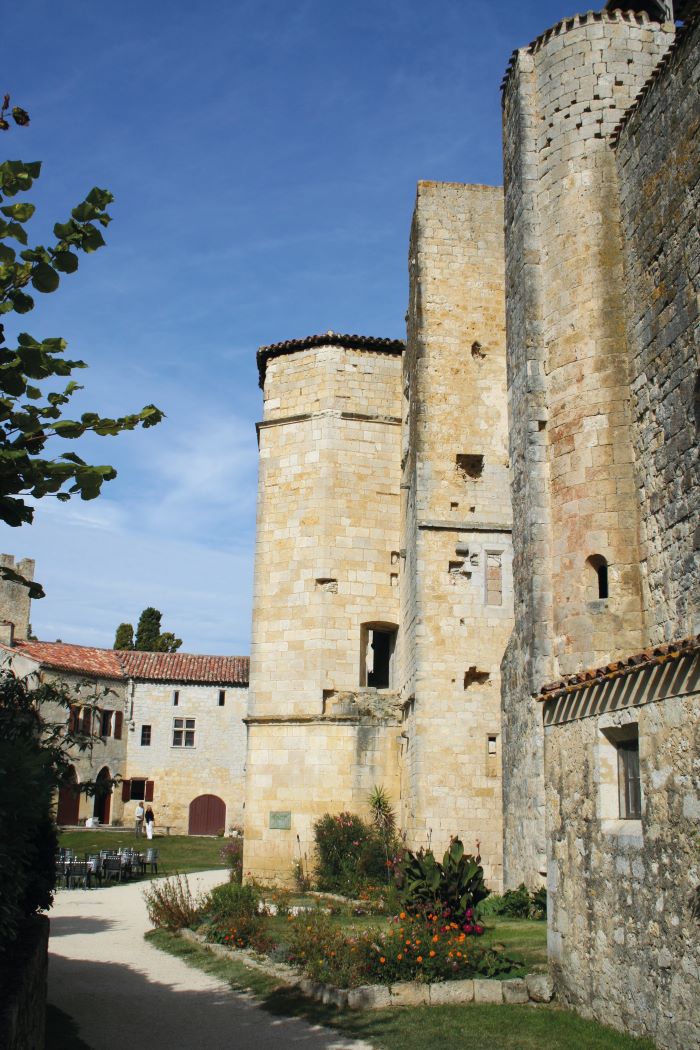 Larressingle, nicknamed the ‘little Carcassonne of the Gers. © Gillian Thornton

Living in Gers during medieval times, you’d have seen an explosion of building as both the French and the English built market towns in the latest ‘bastide’ style. At the heart of these fortified ‘new towns’ was a market square with streets radiating outwards in a grid pattern. Today it is easy to slip back in time as you wander the atmospheric streets of small towns such as Fleurance, Cologne, Valence-sur-Baïse and Marciac. 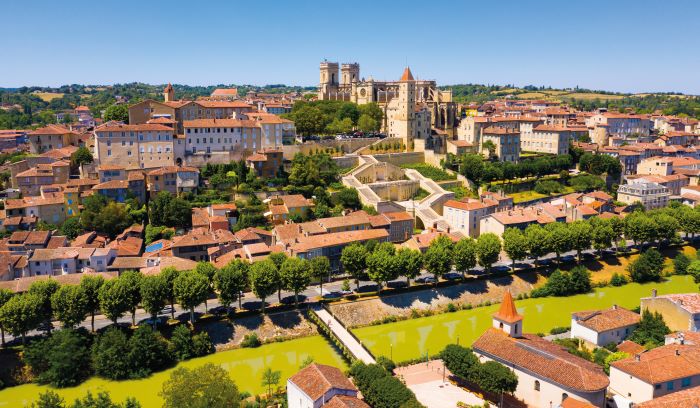 A panoramic view of the city of Auch, the capital of Gers and the historical capital of Gascony. © shutterstock

First of the Gascon bastides was Montréal, built in 1255 by the brother of Louis IX and now one of six Gersois communities classified amongst the Plus Beaux Villages de France. Three of these bijou villages cluster together to the west of Condom in the far north of the département – Montréal with its broad stone arcades; Larressingle with its ramparts and castle keep; and Fourcès, built around a circular central ‘square’. Sarrant, on Gers’ eastern border, has also kept its circular street plan with half-timbered churches around a central church, whilst Lavardens, between Condom and Auch, is dominated by a hilltop castle. East of Condom in the Lomagne area, La Romieu is a must-see with its octagonal bell tower and tranquil cloisters. All are typically Gascon, but each has its own unique story to tell. 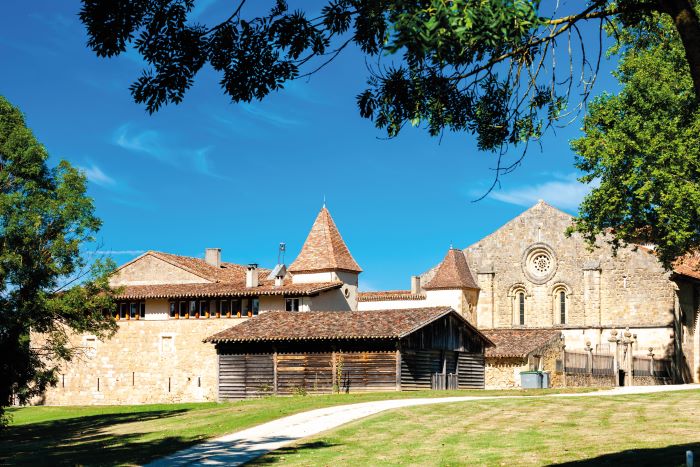 Flaran Abbey, a former Cistercian abbey near Valence-sur-Baïse, has been reimagined as a regional centre for the arts © shutterstock

Close to Montréal, I discovered another treat from a very different era. The Gallo-Roman Villa of Séviac was once the nerve centre of a rich wine-growing estate in Elusa, capital of the local Roman province. Reopened in 2018 after 18 months of renovation, this sumptuous country villa includes a vast thermal bath complex and some exceptional mosaics, some newly on show, which bring life in a Roman country house vividly into focus. Then see the remains of the Domus de Cieutat, a Roman townhouse in Eauze, and browse the collection of coins, jewellery and precious objects at the archaeological museum. 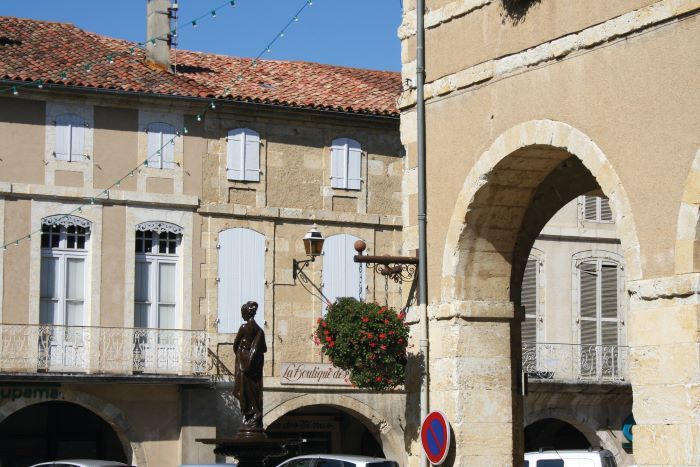 Fleurance is one of many small towns worth a visit in Gers. © Gillian Thornton

Heading east into the Lomagne, I stopped to explore Lectoure ahead of my balloon adventure. This hilltop town enjoyed considerable economic and religious power in the 18th and 19th centuries, still evident today from its ramparts and royal tannery, its grain market, cathedral, and bishop’s palace. It’s a worthy inclusion in Michelin’s Plus Beaux Détours de France and a real must-see on any Gers adventure. 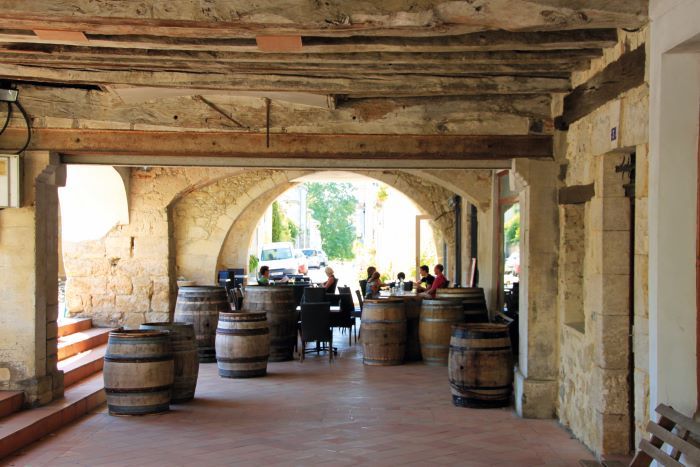 Montréal was the first of the Gascon bastide © shutterstock

During the Renaissance, Lectoure lay within the ‘Blue Triangle’ between Toulouse, Carcassonne and Albi, also known as Le Pays de Cocagne. Only the nobility wore blue, so the production of blue dye from woad plants (known locally as pastel) brought huge prosperity to the area. Green leaves were harvested, crushed to a paste, and left to ferment for several weeks, before being moulded by hand into balls or cocagnes. After four months’ exposure to the Gascon sunshine, the balls were ready for despatch to wealthy clients across Europe, the blue pigment magically preserved within, ready for skilled dyers to release the vibrant colour. Woad fell out of favour with the advent of foreign indigos and later with synthetic dyes, but traditional methods were revived at Bleu de Lectoure in 1994. Don’t miss the chance to pick up a unique souvenir at their shop in Rue Alsace Lorraine. 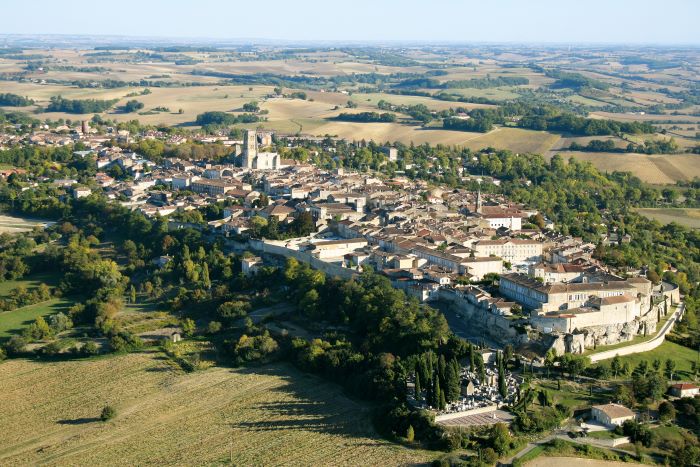 A BREATH OF FRESH AIR

Floating over the Lomagne by balloon combines slow tourism with the ultimate in social distancing. But whichever way you choose to travel, Gers has always offered the chance to ‘get away from it all’.

Head south-west, for instance, from Lomagne through Auch to the opposite corner of the département and the Coeur Sud-Ouest area is a haven for lovers of the great outdoors. Here amongst the vineyards and valleys, it’s hard to imagine the pace and pressures of city life, but that doesn’t mean there’s nothing going on. Far from it, in fact. Farmers and winemakers work with the seasons to produce remarkable AOC vintages, such as Madiran and Saint-Mont, Armagnac and Floc de Gascogne. 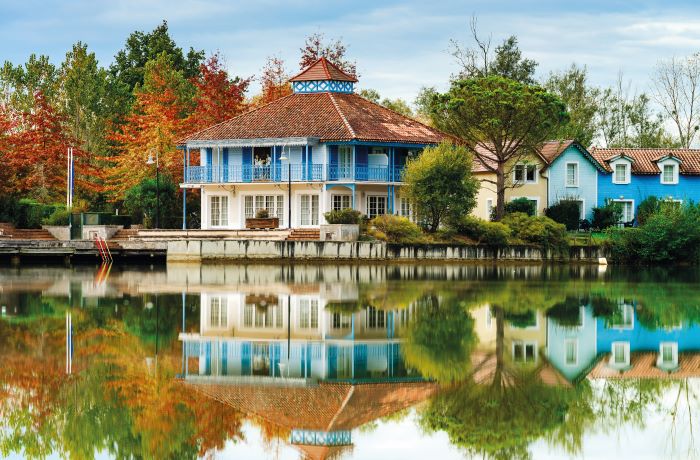 Marciac is world famous for its jazz festival © shutterstock

The bastide town of Marciac in the Saint-Mont vineyards was founded in 1298, but equally prestigious today is its internationally renowned festival, Jazz in Marciac, which was founded 42 years ago. Pandemic restrictions meant that last year’s event had to be an ‘at home’ online festival, but this year should see the return of live music with artists including James Blunt, Nile Rodgers and Gregory Porter. 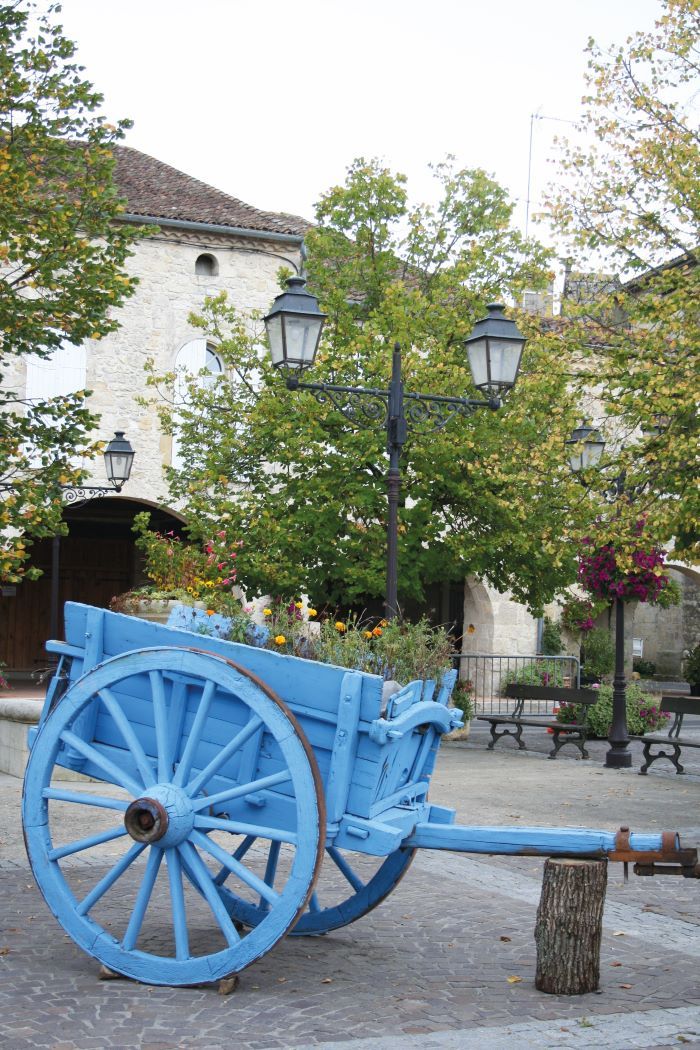 Montréal is one of the Plus Beaux Villages de France. © Gillian Thornton

And if you like art, architecture or just something really out of the ordinary, don’t miss the old courtyard of Marciac’s Couvent des Augustins, where artist Alain Lacoste recently recreated the missing pillars of the former cloister in fine trellis.

The political and commercial power of Gascony may be consigned to the history books, but the Gascon spirit lives on all over this unique corner of France.

For more information and to plan your trip visit www.tourisme-gers.com

Previous Article Pretty and Pink: A Rosé Made in Provençal Wine Country
Next Article Win a Two-night Stay and Experience the Magic of the Champagne Region