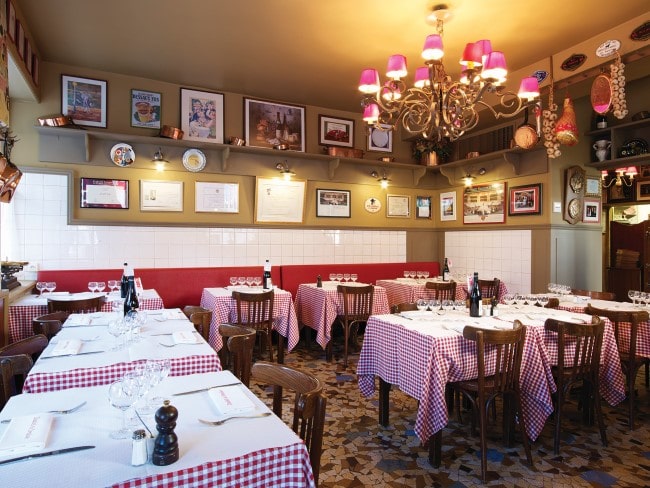 On a raw winter’s night, it was an almost vertiginous pleasure to step through the doors of this cosy bouchon not far from Lyon’s Gare de la Part-Dieu. En route to Switzerland from my place in a village near Uzès, I had decided to break the trip in Lyon both to avoid an ungodly early-morning departure and also to offer myself a meal of the Lyonnais comfort food I had been craving ever since Covid broadsided our lives and put this profoundly delicious and solacing cooking out of reach for a long time.

This bouchon is so charmingly old-fashioned and traditional in its décor that it almost looks like the kind of French restaurant a Hollywood set designer might have conjured up – think red-checked tablecloths, milk glass sconces, cracked tile floors, and caramel varnished wood panelling. Its chef is the amiable and very talented Joseph Viola, a Meilleur Ouvrier de France who has four bouchons in different districts of Lyon and its environs, and he’s made the traditional cooking of the capital of the Gauls his life’s work.

Still, if the menu at Daniel et Denise Créqui reads as a tantalising anthology of traditional French dishes, Viola also offers a few lighter, contemporary dishes, including a catch-of-the-day, which express his affinity for fresh, local, seasonal produce. That said, I couldn’t wait to dive into a feast of the Lyonnais dishes I’d been missing so much, and knowing that I was headed for a solitary but festive feast, I’d skipped lunch that day.

So I started with a slice of the sumptuous pâté en croûte made with duck foie gras and sweetbreads that won Viola an award for the world’s best pâté en croûte in 2009. With a glass of Saint-Péray, a favourite Rhône Valley white, this dish alone was worth traveling for – the lobes of sweetbread and foie gras were impeccably cooked and surrounded by a savoury forcemeat inside a golden rectangle of crumbly pastry – especially since I was so enjoying the theatre of two large happy tables of men tucking into their pre- Christmas office night-out meal together with such unselfconscious hilarity and delight. If they were loving their food, they were also profoundly happy to have tucked their little pale blue masks into their jackets pockets to better enjoy an evening of good guffaws and elbows-in-the-ribs.

I didn’t mean to stare, but apparently I did, because all of a sudden one of the pharmaceutical salesmen caught my eye and called out, “Come have dinner with us!” I lifted a glass to him. “Thanks so much, but I’m eating alone, because my head is so stuffed with work! I wouldn’t be good company…” Good luck, they replied in unison, later insisting, quand-même, that I join them for a snifter of Chartreuse, an invitation I’d absolutely never turn down.

Next, to my surprise, a small omelette du curé aux écrevisses arrived at my table with a pretty lashing of rosy pink sauce.

“I told the chef that you couldn’t decide between the pâté en croûte and the omelette to start, and he said that the only way to solve your dilemma would be to make you a half-sized omelette,” said the waiter with a grin. Its luxuriousness announced by its name – an omelette for the curé, or priest, a guest of honour at anyone’s table – this fluffy yellow fold of egg was filled with freshwater crayfish tails in a sauce made from their crushed shells. Exceptionally delicate in taste – the egg served as a neutral canvas for the sweet, succulent and very rare shellfish – this dish also pleased with the distant ambered scent of the Cognac used in the crayfish cream sauce.

“The crayfish were delivered this morning from Lake Bourget,” the waiter observed, studying me to see if I understood the importance of this detail. “Real French crayfish then, instead of coming from somewhere in Eastern Europe or Asia,” I said, and my response caused him to raise his eyebrows appreciatively. What was left unsaid is that most foreigners wouldn’t know that so many classic French delicacies, including snails, frog’s legs, and crayfish, now come from way beyond the borders of Gaul for reasons of rarity and/or expensive labour.

For my main, I’d been very tempted by the offal, including roasted veal kidneys, calf’s liver, calf’s brains and calf’s head cooked in a court bouillon and served with a ravigote sauce. But aside from the calf’s head, these were things I could and would cook myself, so I chose the tournedos de volaille farci des Landes (tournedos of boned guinea hen meat with foie gras stuffing) in a rich, ruddy chocolate-brown sauce of the bird’s pan drippings. It came to the table with sides of fried sliced potatoes and macaroni gratin, the latter being a favourite Lyonnais comfort food dish.

Dessert after such a feed might beg your credulity, but I was not going back out into the cold night without some egg-wash dipped brioche served with an unctuous pink spread of the pralines (candied almonds) the locals love.

Afterwards, I sipped a Chartreuse with the pharmaceutical company salesmen and we came alarmingly closed to polishing off the bottle the waiter had temptingly placed on the table.

And when it came to 2022, everyone agreed that if continued vigilance in terms of public-health advisories and respect for science were absolutely essential, a little bit of carpe diem was also necessary for our wellbeing as well.

Previous Article Still in the Dark Ages: Are French Kitchens Sexist?
Next Article Survivor’s Guide to the Louvre