The French Adventures of James Bond 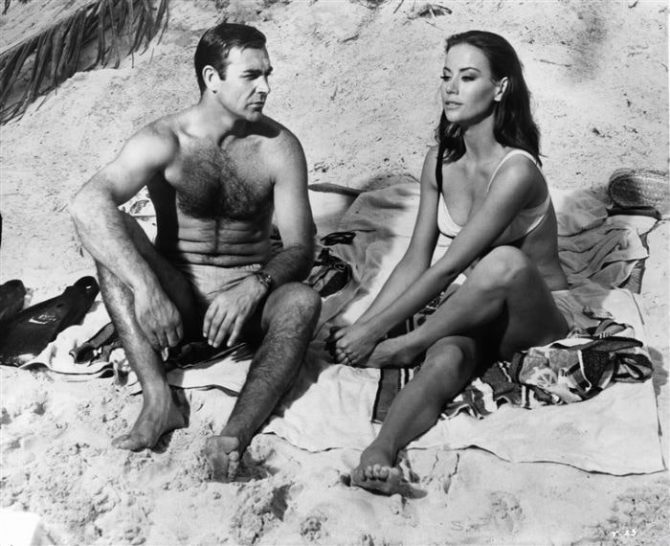 While the world awaits the new James Bond movie ‘No Time To Die’, Chloe Govan follows in the glamorous footsteps of 007 and his escapades across France.

When the new Bond film was titled No Time To Die, unsuspecting producers could scarcely have imagined that world governments would soon say exactly the same due to coronavirus, and that the eagerly-awaited cinematic debut would be postponed in the battle to save lives.

“Never Say Never Again!” bemoaned the world’s film buffs in indignation, as they awaited a new date for the premiere they’d been promised. Now, as pandemic restrictions gradually lift, the rescheduled release date of autumn 2021 is drawing nearer – and for those aiming to follow in the fast-paced footsteps of James Bond, this is no time to let your 007 travel dreams die!

The French Riviera is a Bond hotspot. © Cannes is Yours/Herve Fabre

It wasn’t until the fourth instalment of Bond’s adventures – the 1965 movie Thunderball, starring Sean Connery – that we first caught a glimpse of vintage France. In the opening scenes of the movie, Bond arrives at a funeral to commemorate SPECTRE agent villain Jacques Bouvar, only for the ‘deceased’ to open his car door for him, disguised as a woman. Suspicions confirmed, 007 enters the Château de Bouvar – actually the Château d’Anet in the Eure-et-Loire département, little more than an hour’s drive from Paris – and launches at his rival for a dramatic fight scene within.

In the scuffle that follows, grandfather clocks go flying and topple to the ground and Bond tries to crush his enemy underneath a weighty bookcase. He manages to finish off the villain in the nick of time, unceremoniously throwing a bunch of flowers over his corpse as he lies slumped over the fireplace, and then jets his way to freedom over the château roof. Of course, this is just the start of the movie, as the action later moves to the Bahamas and beyond where an RAF pilot is murdered by SPECTRE, one of the crew surgically alters his face to impersonate the deceased, and the group then hijacks a jet containing NATO bombs. A $100m ransom is at stake, unless Bond steps in to reclaim the explosives, foil the thieves and save the day. 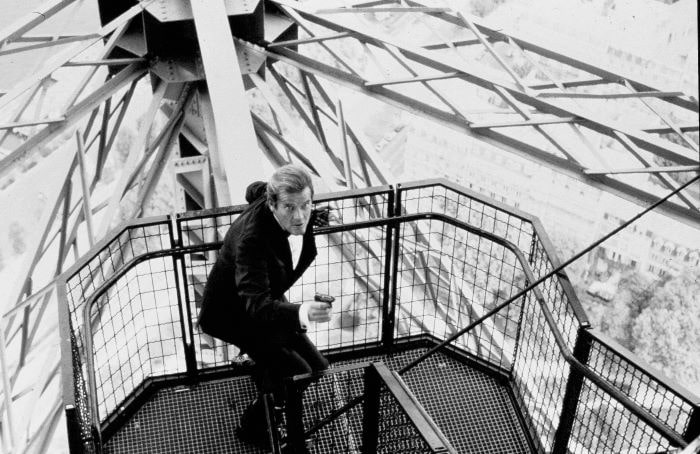 The best action for Francophiles, of course, centres around the early scenes at the Château D’Anet. Not merely the home of the malevolent secret agent in the film, the château has an equally sinister history in real life, courtesy of the notorious queen Catherine de’ Medici.

Often omitted from château lovers’ itineraries in favour of better-known Loire Valley icons such as Chambord or Chenonceau, the location actually has a thrilling past that’s worth investigating. Henri II originally commissioned it as a romantic gift to his mistress Diane de Poitiers.

Catherine de’ Medici was allegedly seething with rage at her husband’s preference for his illegitimate other half – and after his death during a joust, she booted de Poitiers out of the more opulent Chenonceau where she’d been living and annexed her at Anet. 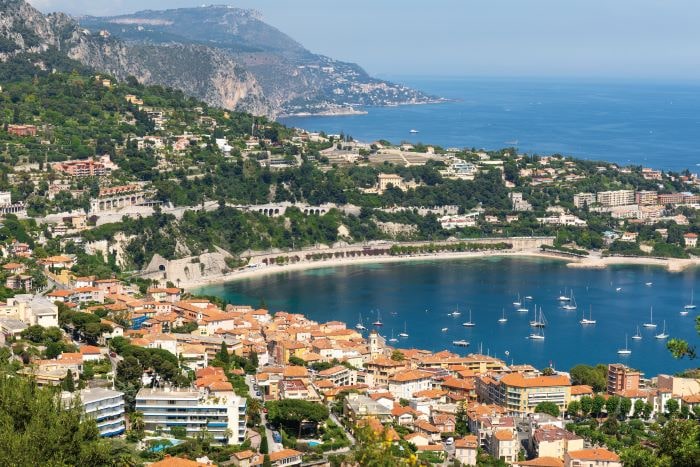 Her rival might have had a lucky escape, as rumour had it that Catherine was a skilled killer who murdered her opponents through poison stashed in her perfumed gloves. The powerful and malevolent queen had always boasted a keen interest in the occult and the dark side of pharmaceuticals, and she included the feared fortune-teller Nostradamus among her closest allies. As visitors to her châteaux today will discover, Catherine kept her own potions, carefully concealed behind bookcases – could it be that if her husband’s mistress had dared to return, that she might have sought fatal revenge?

More brutal behaviour followed later for the château, when it was bombed in the Second World War and stormed by Nazi occupiers. The remains of the estate today include its chapel and the tomb of Diane de Poitiers. While the château lacks the grandeur, size and stature of the likes of Versailles and Chambord, it should nonetheless rank highly on a Bond fan’s travel itinerary for both its on-screen and real-life subterfuge. 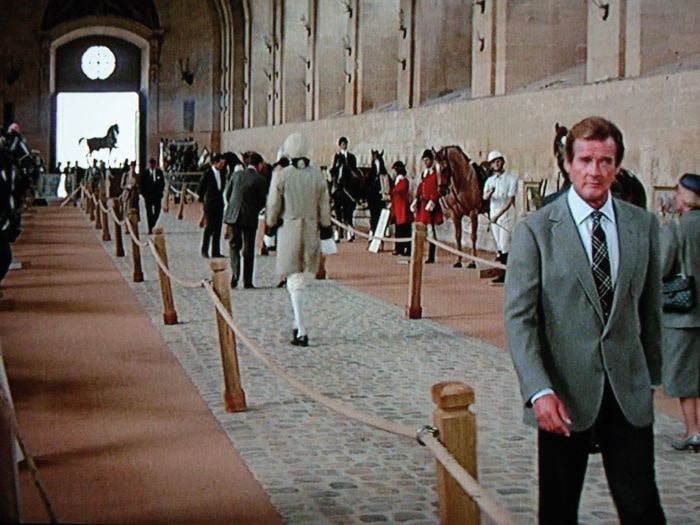 A BEVY OF BEAUTIES

The next couple of Bond films passed without a glimpse of la belle France, but the tide turned in the 1971 classic Diamonds Are Forever, when Connery made a fleeting visit to the Cap d’Antibes – yet no sooner had he strangled a woman with her own bikini top than the visit to French territory was over. Why had they travelled so far for such a short filming sequence? No doubt the answer lies in the thrillingly glamorous location – the Hôtel du Cap-Eden Roc. Its perfectly landscaped ocean-side gardens, seductive views and swimming pool cut into the rock-face position it as one of the most luxurious hotels in the country by far – and a must for anyone considering a splurge. 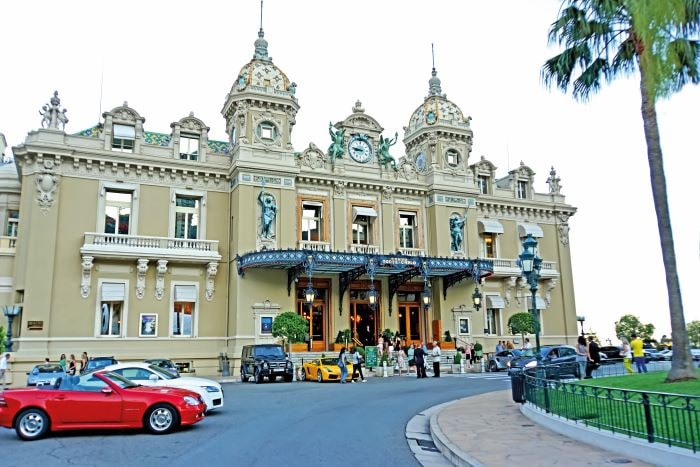 The Casino at Monte-Carlo. ©DENNIS JARVIS VIA WIKIMEDIA COMMONS

Eight years later, Bond – this time played by Roger Moore – returned to the world of French châteaux for Moonraker, during which he visits the owner of a high-profile space shuttle that has mysteriously disappeared. The home, though billed as a Californian destination, is none other than the Château de Vaux-le-Vicomte, an hour’s drive south of Paris. Demonstrating just how classically French this Baroque masterpiece is, it was the inspiration for the Château de Versailles – and both were built by the same team. Officially listed as an historic monument, its formal gardens were created by royal aide André Le Nôtre, the gardener to the King. Anyone aspiring to glimpse the same views as Bond when he glided over here in a helicopter needs only to ascend the château’s 82ft dome for panoramic views of the estate. With a mere €3 added to the entrance fee, the experience exudes the same glamorous aesthetics, but without a painful pricetag. 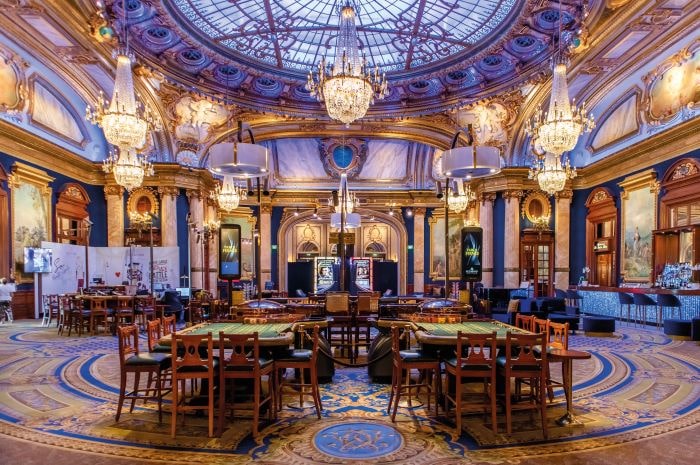 Connery returned for a final appearance in the 1983 offering Never Say Never Again. The title was a playful dig at how, 12 years earlier, he’d publicly insisted that he’d never play Bond again. Could it be that he was swayed by the temptation of some more theatrical action moves on the French Riviera? If so, he was not to be disappointed as Largo’s on-screen Palmyra fortress was, in fact, the Fort Carré in Antibes. Built on the orders of Henri II, it would later imprison Napoleon – although Diane de Poitiers had avoided the same fate by swiftly returning the crown jewels to the Queen after Henri’s death. Visitors today can enjoy awe-inspiring panoramic views atop its walkway. 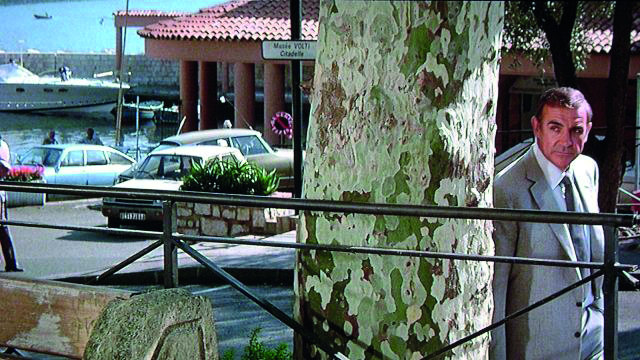 Elsewhere on the Riviera, the thrilling motorcycle chase between Bond and SPECTRE reveals stunning scenes of Menton and Villefranche-sur-Mer. Bond also had some memorable misadventures just across the border in Monaco. Here, the seemingly reckless ladies’ man gambles in the Monte Carlo casino and then famously forgoes his $267,000 winnings in exchange for “one dance with Domino”.

Connery appeared just as glamorous in real life, purchasing Le Roc Fleuri, a pricey villa on the bay of Nice, which he later listed for sale for €30m. It is rumoured that some scenes from Never Say Never Again were discreetly shot at the villa. Until his death in 2020, Connery remained an ardent Francophile. 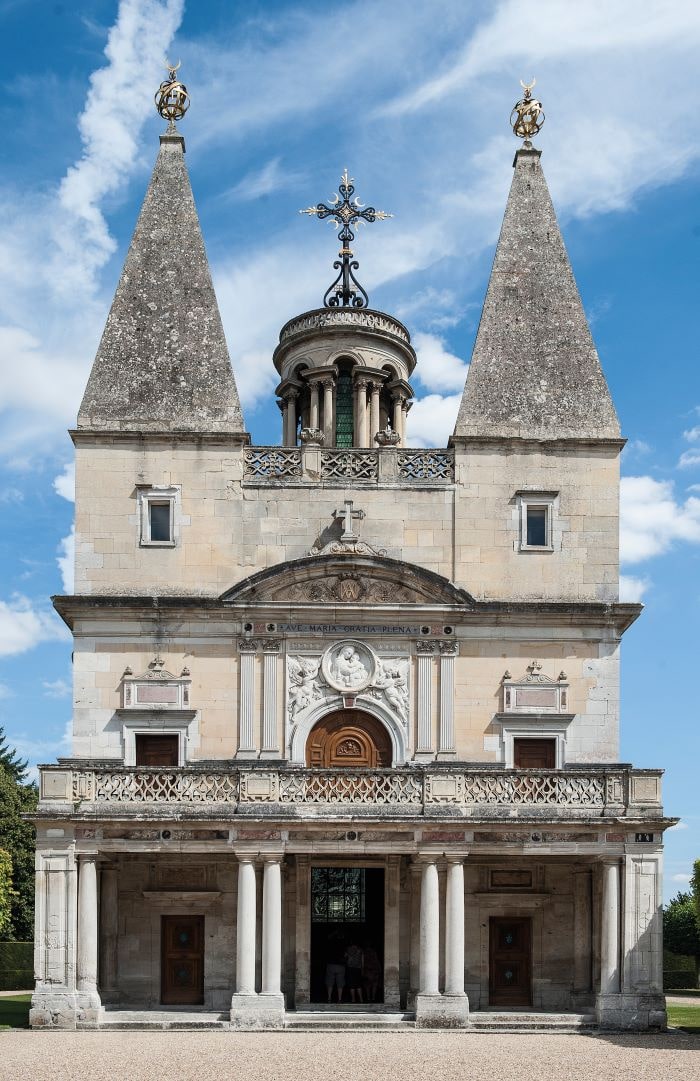 Perhaps the most famed French film scenes in the entire history of 007 appeared in the 1985 movie A View To A Kill. Bond, we are told, “never enjoyed a single happy day in Paris” – and, given the ruthless assassination he witnessed there, it’s little wonder. Suspecting foul play from racehorse trainer Max Zorin, Bond meets with a private detective at Le Jules Verne restaurant atop the Eiffel Tower to uncover the truth. “How could Zorin’s horses be beating those with superior bloodlines?” he quizzes the intelligence officer opposite him. A hidden opponent doesn’t wait for the answer – just after posing the delicate question, the detective is dramatically assassinated right in front of him. Screams break out and Bond finds himself scrambling about in the structures of the Eiffel Tower, dodging bullets while firing his own.

The movie also visits the Château de Chantilly – a 45 minute drive from Paris – and the surrounding stables where Bond attends a horse sale. Here he discovers Zorin’s secret laboratory, where he is chipping horses with performance-enhancing adrenalin devices. Some 36 years on, Chantilly’s château, racecourse and Museum of the Horse are still great locations to add to a Bond-themed travel itinerary. 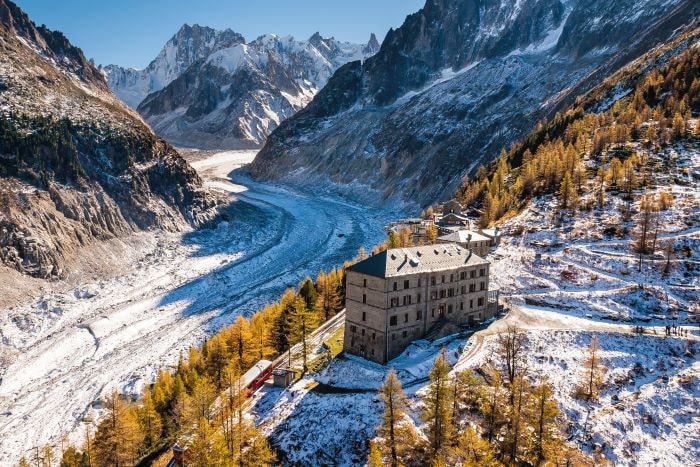 Chamonix- the region where ‘The World Is Not Enough’ scenes were filmed. Aerial View of Grand Hotel du Montenvers.

Ten years after these memorable scenes came Goldeneye – this time featuring Pierce Brosnan as the agent with a licence to kill – and its footage of the Gréolières road in the mountains above the Riviera, full of hair-raising hairpin bends. From here, long-distance road-trippers can drive 480km north straight to Chamonix – and specifically Argentière, the village where scenes from the 1999 movie The World Is Not Enough were filmed. Here, Bond, again played by Brosnan, dodged real-life challenges, including avalanches, to shoot the sensational off-piste ski chase scenes. Any keen skiers aspiring to follow in his footsteps will feel right at home in this location, which is known as “the birthplace of extreme skiing.” 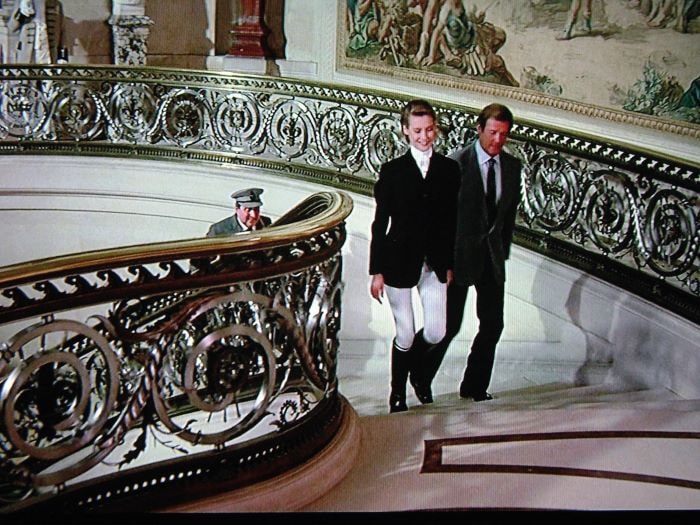 Sadly, during the year-long, on-off lockdown, two of the greatest additions to the Bond brand – Sean Connery and French stuntman Rémy Julienne – passed away, both at the age of 90. Julienne was a stunts genius, known as the “Einstein of stuntmen”, being responsible for heart-pounding crashes and collisions in more than 1,400 movies. He not only devised them but appeared as a body double for many too, which included posing as Roger Moore and once even donning a wig to impersonate Sophia Loren! Viewers can spot the dramatic destruction of Bond’s car at the Paris quays in A View To A Kill thanks to Julienne, who sadly he succumbed to coronavirus in January 2021.

Meanwhile, No Time to Die marks the 25th instalment of Bond’s adventures and the last outing for Daniel Craig, as Lashana Lynch becomes the first woman to play a 007 agent. But we can be assured France will remain a regular co-star for many years to come.