The Matisse Chapel in Vence Inspires Hope… and a New Play 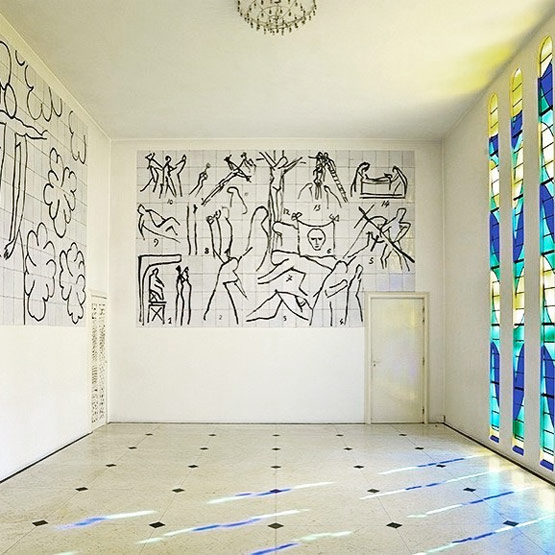 The chapel that Henri Matisse designed in Vence is a must-see for pretty much everyone visiting the South of France. It’s a painless expedition from Nice: a pleasant half-hour drive along the coast and into the hills, and there you are. The Chapelle du Rosaire is a small building. You can experience it quickly in the cool of the morning and move on to a lovely lunch at Le Michel Ange.

200,000 people a year visit the Chapelle du Rosaire. I suspect most of them leave, if not moved, at least appropriately impressed — every tour guide tells visitors that Matisse, one of the most celebrated artists of the last century, described the chapel as the “masterpiece” of his career. The story behind its creation? It’s no secret, but it seems to be known only by hard-core art lovers and scholars. It certainly wasn’t known to me when I waltzed through the chapel decades ago.

A few years ago, a random Internet search led me to the back-story, and, fascinated, I narrowed my search to learn how and where it had been dramatized. It hadn’t been. So although I’d never written a play, I applied the skills of my long career in journalism: I read every biography of Matisse and every art book about the chapel. And then I wrote “The Color of Light,” which will be staged from April 4-28 by the Schoolhouse Theater in Croton Falls, a pleasant drive or train from Manhattan. [For information and tickets, click here.]

As a drama, the story of the chapel deals with a single question: How did Matisse, a lifelong atheist, come to design a place of worship for Catholics?

The answer: a woman. Of course. But not in the way you may be thinking. 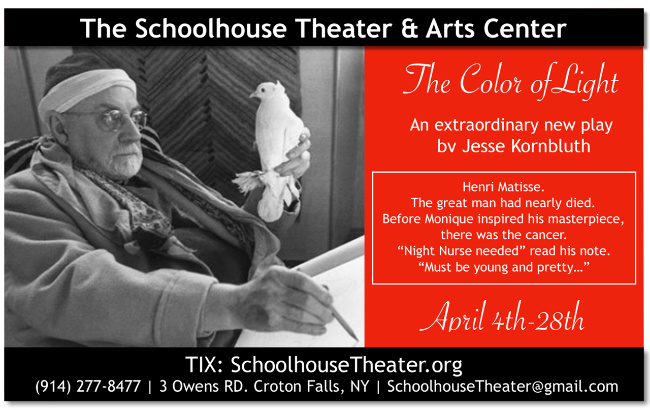 In 1942, Matisse was 72, divorced, living in Nice and recovering from an operation for cancer. His only companion was his chilly Russian assistant. Needing a night nurse, he hired Monique Bourgeois, a 21-year-old nursing student. In the 15 nights they were together, Matisse came to love her like a daughter. But when he learned that she was going to become a nun, he was enraged. They parted on bad terms.

Five years later, Matisse was living in Vence. So was Monique, who was Matisse’s friend again — even if she was now Sister Jacques-Marie. Her convent prayed in a chapel that was once a garage. When it rained, the roof leaked. She asked Matisse to design a stained glass window so the nuns could raise money and repair the garage. He had another idea: a new chapel. Which he’d both design and pay for. Over opposition, Matisse spent years focused on the project. Jacques-Marie, who had unwittingly been photographed with Matisse for Vogue, wasn’t allowed to attend the dedication.

It’s easy to be underwhelmed by the chapel. It’s as close to empty as possible. No organ. No seats for a choir. Nothing to look at but colored windows, a few figures and some black designs and abstractions on the glazed white ceramic tiled walls. But to see it as a building that contains Matisse’s art and some colored windows is to miss his intent. For him, the building itself was art, an environment designed to lift your spirits and bring you closer to wherever you find the divine. 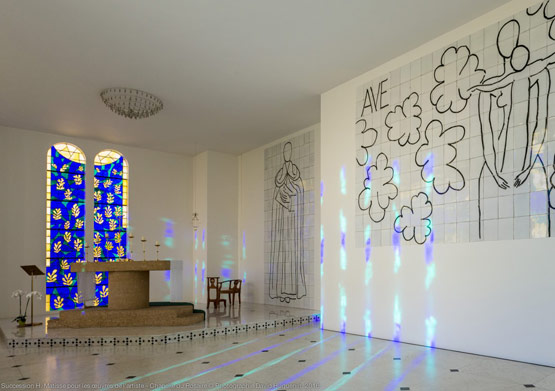 The main feature of the chapel is light. There are many windows, some clear, some blue, green and yellow. But not just any blue, green and yellow. The blue is a shade Matisse said he’d only seen twice, once on the wing of a butterfly, once in the flame of burning sulphur. The green is bottle green. And it’s lemon yellow. When the light streams through, the colors merge on the white tiled floor and come alive. Children sometimes cup their hands and try to gather a present for their parents. They get it.

Most of the figures on the wall are non-threatening. That can’t be said of the Stations of the Cross. Matisse depicted the 14 fatal steps of Christ’s last day on a single wall in a jumble of graffiti-like figures that suggest broken limbs and profound grief. The church was horrified. It seemed the chapel wouldn’t be built. But Matisse was an astute politician: You don’t see The Stations of the Cross as you enter.

In our world, old age means a winding down, assisted living, and death in an antiseptic hospital room. But the Chapelle du Rosaire celebrates the exact opposite. It’s a late-life success story, with a creative flowering, a great love, and a good death at home. That story, told as a play, might deliver a transcendent theatrical experience. I dare to hope I’ve done that. 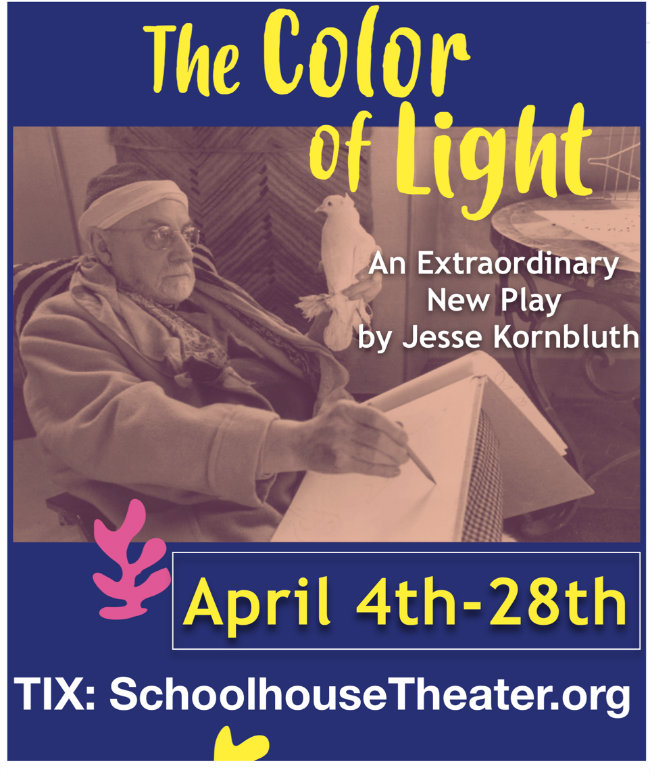